All Ball Sports: Lakers win title. Best yet to come 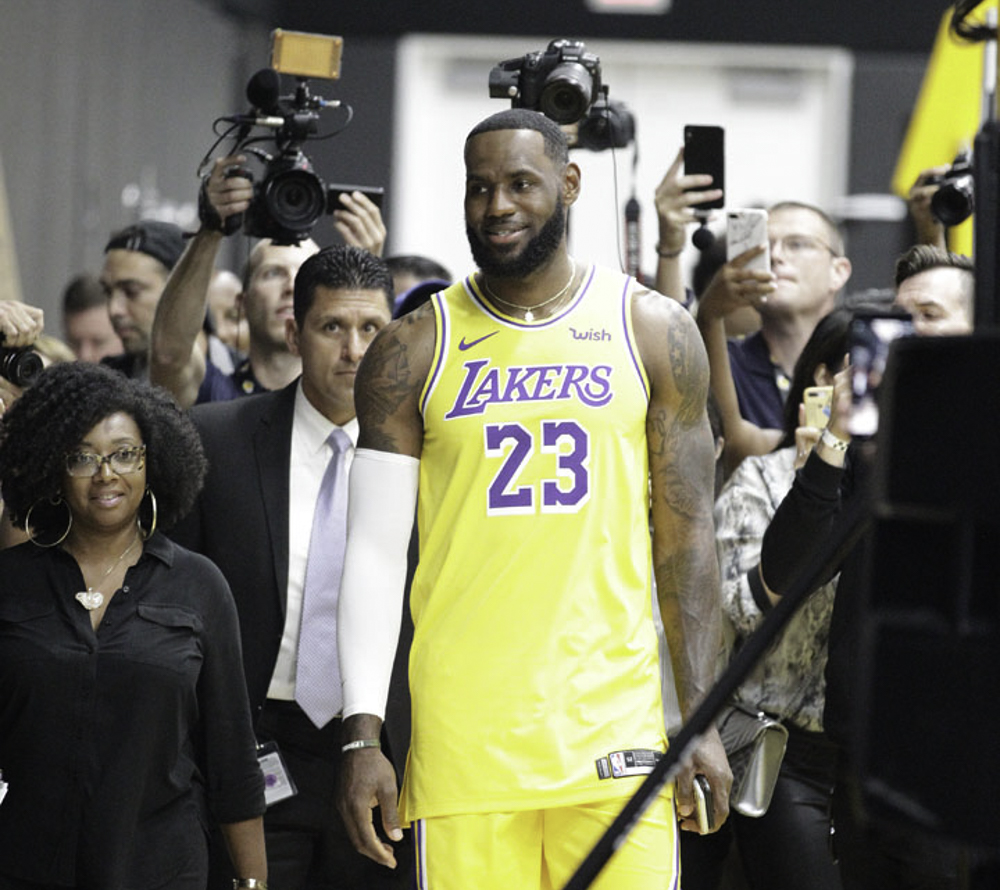 A healthy LeBron and healthy Anthony Davis could put the Lakers and Clippers together in the 2022 finals. Photo by Ray Vidal

“I told Jeanie when I came here I was going to put this franchise back in the position that it belongs,” — LeBron James recalling his arrival in Los Angeles last September. Photo

This one was for Kobe.

A year that started with the worst tragedy in Lakers history ended in bittersweet triumph:  the Lakers won their 17th NBA title Sunday night, which ties the franchise with the Boston Celtics for the most championships in league history.

Forget last season’s lost season. The Lebron James era in Lakers history officially began when they won the first of what could be – hell, should be — several NBA titles in the next few years. The 106-93 victory over the Miami Heat in the sixth game of the Finals consummated a marriage that just a year ago had looked to be in serious trouble.

The post-game on-court championship celebration featuring Finals MVP LeBron, his sidekick Anthony Davis and Lakers owner Jeanie Buss was a stark contrast to last season, LeBron’s first in purple and gold. The Lakers missed the playoffs for the sixth year in a row and LeBron missed the playoffs after making it to the Finals for eight years in a row with the Heat and the Cleveland Cavaliers. As the mediocrity of his teammates sank in, he often looked distracted and disinterested, the new kid in school who couldn’t find any other cool kids to hang with.

But that had all changed by halftime Sunday night, when the game was over for all practical purposes after the Lakers grabbed a 64-36 lead.

Even before the final score of 106-93 was posted, a huge, rowdy crowd started to form outside the Staples Center. Not surprisingly there was little social distancing between celebrants and virtually no masks except for a few purple and gold masks being worn more in celebration than out of Covid caution. A police tactical alert went out, fireworks were exploded in the street, bottles were thrown, a coffee bar was trashed and there were 57 arrests.

But 2,500 miles away the Lakers players, execs and their families did their best to pretend their own title celebration wasn’t happening in a spectator-less bubble where they had been cooped up since July, when the season restart began with eight games left in the regular season.

For LeBron, it was all about recapturing the respect he felt he had lost last season, when the whispers began that he was no longer the undisputed best player in the world and he was actually booed a few times by the home crowd at Staples Center. Imagine what a shock to his system that must have been. He hadn’t been booed since 2010, when the city of Cleveland turned on him after he took his talents to Miami Beach.

While the Lakers family was celebrating the present, they all knew there was even more reason to celebrate what could – indeed, should – happen in the future. Not only will the seemingly ageless LeBron keep dominating games well past his upcoming 35th birthday, but there is zero doubt that Davis – an unrestricted free agent this off-season – will be re-upping for a multi-year contract. He is represented by Klutch Sports, the agency run by LeBron’s BFF Rich Paul, and he does whatever LeBron tells him to do. What LeBron wants to do is win a bunch of titles here and then retire as the greatest of all time and the only player ever to lead three different franchises to an NBA title. And what AD wants to do, after eight years of losing and despair in New Orleans, is to take his rightful place alongside LeBron as an all-time Laker great. So bet the ranch on it: the dynamic duo of LeBron and AD will be terrorizing the league for many years to come.

The game 6 victory – which actually carried a bit of suspense since the Lakers had blown their first chance to win it in game 5 – washed away a full decade of frustration and dysfunction for the entire Lakers family – players, coaches, front-office execs and especially the title-starved fans.

The downward spiral started in the spring of 2011 when the two-time defending champions, led by Kobe, Pau Gasol and Lamar Odom, were upset in the second round by the eventual NBA champion Dallas Mavericks.

Look at what a difference a decade can make: Kobe is dead, Lamar nearly killed himself in a drug binge at a Nevada brothel and is still a pitiful victim of the Kardashian Curse, and Pau is an NBA journeyman who over the last five years signed with the Bulls, Bucks, Spurs and Trailblazers, who waived him in the summer of 2019 before he could play a single game for them. He has almost surely played his last NBA game.

In the post-game celebration, Kobe was the only of those past stars who was mentioned.

Justin Herbert is the unluckiest man in LA

The only kind of luck Justin Herbert has had so far is bad luck.

The Chargers rookie quarterback has been setting all kinds of passing records after being thrust into action in the team’s second game because starter Tyrod Taylor suffered a freak injury two minutes before kickoff. But while he is setting records the team has gone 0-4, with two of the losses in overtime and one, a last-second loss to Tampa Bay and 43-year-old Tom Brady, the greatest QB of all time.

It happened again Monday night, when the Chargers lost 30-27 in overtime to the New Orleans Saints and 41-year old Drew Brees, who holds all the career passing records that Brady doesn’t have.

When something bad happens in four consecutive games while your star rookie is setting the league on fire, it’s time to put the team’s play-calling by Head Coach Anthony Lynn under the microscope. And what Monday night’s nationally televised game revealed is that once the 6-foot-6, 240-pound Herbert had staked the Chargers to a 20-3 lead with three first-half touchdown passes, Lynn turned more conservative than Rush Limbaugh. On possession after possession, Lynn called for running plays on first down even though the team’s running attack was going nowhere. After a loss of yards or no gain, he would usually do the same thing on second down with little success. Then he would turn to his rookie star to hit a downfield dart and bail his team out. Sometimes Herbert was able to avoid the Saints’ ferocious pass rush and complete a pass – including a 64-yard strike late in the fourth quarter for yet another touchdown – but too often the Saints knew what was coming and were able to bat the pass down or sack Herbert. Lynn’s play calling was more predictable than Donald Trump’s bragging at a campaign rally.

Adding to Herbert’s bad luck: After the first TD pass Chargers kicker Michael Badgley missed a point after try that would have given his team a 28-27 lead at the end instead of the 27-27 tie that forced the overtime. Even worse, his 50-yard attempt at a game winning field goal looked good until the last second when it hit the right cross-bar – doink! – and fell back.

Herbert finished 20 of 34 for 264 yards. Oh, and he became the first rookie ever to throw for four TD’s on Monday Night Football, which has been the NFL showcase for more than 50 years.

Chargers fans can only hope that Lynn – who this week was made official what everyone already knew, that Herbert was the starter from now on – finally realizes the nuclear weapon he has on his hands and starts to build his offensive game plan around Herbert’s passing ability — and then go to the run once the defense has to adjust to stop the passing game.

Herbert’s response to all this bad luck and bad play calling?

He’s too young and respectful to ever question his head coach, so we’ll have to do it for him.

All season long while the Dodgers posted the best record in the incredible shrinking MLB season, only two potential weaknesses that could keep them from winning their first World Series since 1988 revealed themselves.

First, they were too dependent on hitting home runs, but as long as they kept slugging them it didn’t seem to matter that they didn’t have a Plan B for scoring runs.

And second, that closer supreme Kenley Jansen – who last month sold his Redondo Beach house for $2 million and moved to Palos Verdes – was no longer the best closer in baseball. In fact, he had become one of the worst, and his new specialty was serving up walk-off home runs. Behind Jansen was only Nervous Joe Kelly, flame throwing kids Dustin May and Jose Urias, and a bunch of no-name guys on hand mostly to take up space in the bullpen.

Both of those weaknesses came back to bite them in the butt Monday night in a 5-1 loss to the Atlanta Braves in the opening game of the National League Championship series.  It was a 1-1 pitchers duel going into the ninth inning only because Mookie Betts belted a fastball into dead center that would have been a homer in almost any other park in baseball. But the NLCS is being played at Arlington, Texas and Betts’ blast was just a long out in the most spacious park in the country. And long after Dodgers starter Walker Buehler had departed, the Dodgers bullpen fell apart and gave up two home runs in a 4-run 9th inning.

The loss set the template for what could be a disastrous NLCS: all seven games, on seven consecutive days, are scheduled to be played in Arlington.

In any other season, four of those seven games would have been played in Dodgers Stadium and they would be leading 1-0.

But this year is special – in so many ways.