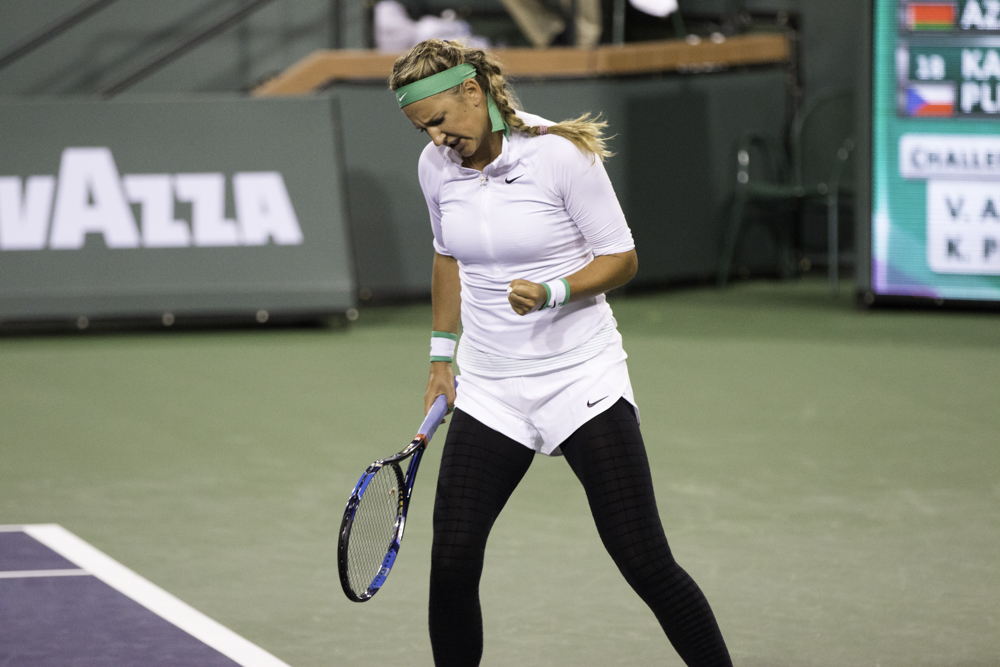 Manhattan Beach resident Victoria Azarenka advanced to the finals at the U.S. Tennis Open on Saturday, after defeating Serena Williams in the semi finals. Azarenka (above) competing at the Indian Wells Tennis Garden in 2018. Photo by Brad Jacobson (Mad Video Lab)

The nightmarish end came Tuesday night when they lost game 7 by a humiliating score of 104-89. A blowout. The Clips weren’t even competitive in the second half when it mattered most.

Back in 2015 the Clippers had two alleged superstars in power forward Blake Griffin and slick point guard Chris Paul. They called themselves Lob City and looked to become the first Clippers team ever to advance to the Western Conference Finals but choked it all away in a hail of missed shots and bad decisions.

The only holdover from 2015’s crushing loss still with the team: Coach Doc Rivers. Draw your own conclusions.

Within a couple of years, both Griffin and Paul had been run out of town and the team had a new owner in multi-billionaire Steve Ballmer, who said he would pay anything for a championship team.

You can buy talent.

By the time game 7 came around Tuesday night, the new-look Clippers – led by genuine superstar Kawhi Leonard and faux superstar Paul George – were so nervous they couldn’t hit a shot when it mattered, were slow to every loose ball, hesitated on moves they would normally make by instinct, and played such loose defense that Denver stars Jamal Murray and Nikola Jokic did whatever they wanted and played free and easy.

The most immediate consequence of the shocking loss is the cancellation of the long awaited and hyped-to-the-max Battle of LA between the Clippers and Lakers for the Western Conference Finals that start Friday night.

It would have been the first time the two teams had ever met in the playoffs, and the first time both teams made it past the first round in the same season. But it was not to be.

This year the Lakers cruised into the Western Conference Finals with a 5-game beatdown of the squabbling Houston Rockets. The Rockets’ two superstars – chronic playoff choker James Harden and reckless Russell Westbrook – simply were no match for the Lakers two superstars, Alpha Dog LeBron James and silent killer Anthony Davis.

Meanwhile the Nuggets two superstars – sensational shooting guard Murray and do-it-all center Jokic — played well in overcoming a 3-1 deficit to force a game 7, and then played even better in game 7. The 7-foot tall Jokic was so impressive as a playmaker that he now ranks as the best passer among all the big men who ever played – including Bill Walton and Arvydas Sabonis.

The pain of the unexpected loss was deep for a Clippers team that was built to win a championship this year. Rivers, Kawhi and George all gave short, mono-syllabic answers in their press conference Tuesday night and looked into the cameras with thousand-yard stares that were a carryover from how they looked in the fourth quarter.

Now the Nuggets will advance to play the Lakers in the Western Conference Finals. The winner will play either the Miami Heat or Boston Celtics, who will fight it out for the Eastern Conference title. That’s right: if the Lakers beat the Nuggets, there’s a 50 percent chance we will have yet another chapter of the classic Lakers-Celtics battles that go all the way back to the 1960s.

The long-running rivalry had a modern revival a decade ago. First they met in the 2008 Finals – Celtics won in 6 – and again in the 2010 Finals, when Kobe Bryant’s fifth and last championship team outlasted the Celts by 4 points in a memorable game 7 in front of a tense, screaming, standing-room-only Staples crowd. Roughhouse Ron Artest – excuse me, Metta World Peace — was the unlikely hero of that game who stepped up when Kobe couldn’t hit a shot until the last five minutes. Oh, and the Celtics best player in that game was a third-year point guard named Rajon Rondo who now plays for the Lakers.

The chatter about a possible Lakers-Clippers Hallway series at Staples started a year ago during training camp. By then LA’s two teams seemed to be the class of the Western Conference after a summer of wheeling and dealing that brought George and Kawhi to the Clippers and Anthony Davis to the Lakers.

It took a lot – starting with top scorer Danilo Gallinari and future-star Shai Gilgeous-Alexander — as well as every first-round draft pick the Clippers owned well into the middle of this decade.

At first owner Steve Ballmer was hesitant to give up such a treasure trove of players and draft picks for George – an All-Star but not a top-10 player – until Coach Doc Rivers sold him on the theory that they weren’t just paying for George. His reasoning: they would not be able to sign Leonard as a free agent without George on the roster, so the steep price in assets for George was, in effect, being paid to get both George and Leonard.

That was the winning argument a year ago, but Tuesday night it looked like a loser as Kawhi and George combined to shoot 10-of-38 – a stunning show of ineptitude.  And Kawhi was lethargic, playing his worst game of the playoffs and missing 10 of 11 shots in the second half.

George was worse. In the fourth quarter he threw up a three-pointer that hit off the side of the backboard, and twice threw the ball directly to a Nugget player who gratefully took the gift and cruised in for a layup.

It was painful to watch when you consider that George’s play was so bad during the first round series against Dallas that he talked publicly about the mental health struggles he endured trying to live up to the great expectations heaped on him.

Now the ordeal is over – for him and the Clippers.

The long-range consequences of this terrible collapse are ominous. Even though the Clippers announced that both Kawhi and George had signed four-year contracts last summer, the fine print said that the last two years were a player option. That means they really only committed for two years and will both be free agents next summer after the 2020-21 season. If they flame out again next season, it is easy to imagine that both would want to leave for greener pastures.

The nurse gave him a fever

The NBA bubble has been a great success: not a single Covid-19 positive test yet, and no one ejected for violating the strict health protocols – until this week. Houston’s Danuel House was ejected and told not to come back Friday after he was caught with a female visitor in his room.

House, who is married, met his lady friend when she came to his room earlier that day to administer a temperature test. They hit it off so well that he arranged to leave a side door open later on so that she could sneak into the hotel where the Rockets players are housed.

No word yet on his Houston homecoming, but it’s a safe bet there will be trouble in the house.

The league’s official statement said House was kicked out for having “an unauthorized guest” in his room for “multiple hours.” Think his wife will be able to translate that into plain English?

The 7-year drought is over

The feel-good story of the week in pro sports involved long-time Manhattan Beach resident Victoria Azarenka, who made it to the finals of the U.S. Tennis Open on Saturday, before losing a tight, three-set match to the best player on the tour, Naomi Osaka, 1-6, 6-3, 6-3.

Azarenka, who has lived in the Sand Section since 2011 and has been frequently spotted practicing at the Live Oak tennis courts, has been through hell and back in a custody dispute with her ex over their child Leo. She essentially sat out three years during her pregnancy and custody fight. Before Saturday’s match she had not played in a major final in seven years. Her three-set semifinal win over Serena Williams was the best match of the women’s event. After Williams blitzed her in the first set 6-1, Azarenka went for broke, tried for a winner on every shot, and won the last two sets 6-3, 6-3 as an overweight and overwrought Williams collapsed.

Why would Azarenka need to practice at Live Oak when the MB Country Club has much better courts in a better setting? Why didn’t they do for her what they did for Maria Sharapova when she moved to Manhattan Beach more than a decade ago: give her her own court for use whenever she is in town?

According to MBCC insiders, after Azarenka won her second straight Australian Open title in 2013 the club did offer to set her up with a court reserved for her whenever she wanted to practice there. But when Sharapova – the most well-known and highest-earning female athlete in the world – heard about it she threatened to walk and end her long association with the club.

The rule is: Only one diva per club.

Rams and Chargers both get lucky

Locally, the NFL season got off to a shaky start even though both the Rams and Chargers won by three points. On TV the brand new, $5.5 billion SoFi Stadium, where both teams will play their home games. looked like the mother ship from the “Close Encounters of the Third Kind,” tricked out with the world’s largest video screen.

The Rams got lucky when a questionable offensive pass interference penalty was called against Dallas late in the game, stopping what looked like a winning touchdown drive. The Chargers got lucky late in Cincinnati when the Bengals’ rookie kicker shanked a gimme 33-yard field goal try and came up limping with a torn calf muscle.

Despite the wins, neither LA team looked like legit contenders. The Rams have two great defensive players in lineman Aaron Donald and defensive back Jalen Ramsey, who was clever enough to induce that game-saving offensive pass interference call against the Cowboys. Unfortunately, neither of them can play quarterback and that is the Rams’ real problem. Last year they signed fifth-year QB Jared Goff to a staggering four-year, $134 million extension, a massive, salary-cap-clogging deal way beyond his talent or production level. Now they are stuck with him for four more years because he is untradable with that contract. The Chargers QB starter, Tyrod Taylor, has career back-up written all over him. Where have you gone, Philip Rivers?

It was weird enough watching a Rams game with no fans and fake crowd cheering in cavernous SoFi stadium. But you can’t win consistently in the NFL without a franchise quarterback, so SoFi Stadium may soon need to add another element to its audio mixtape: fake booing.