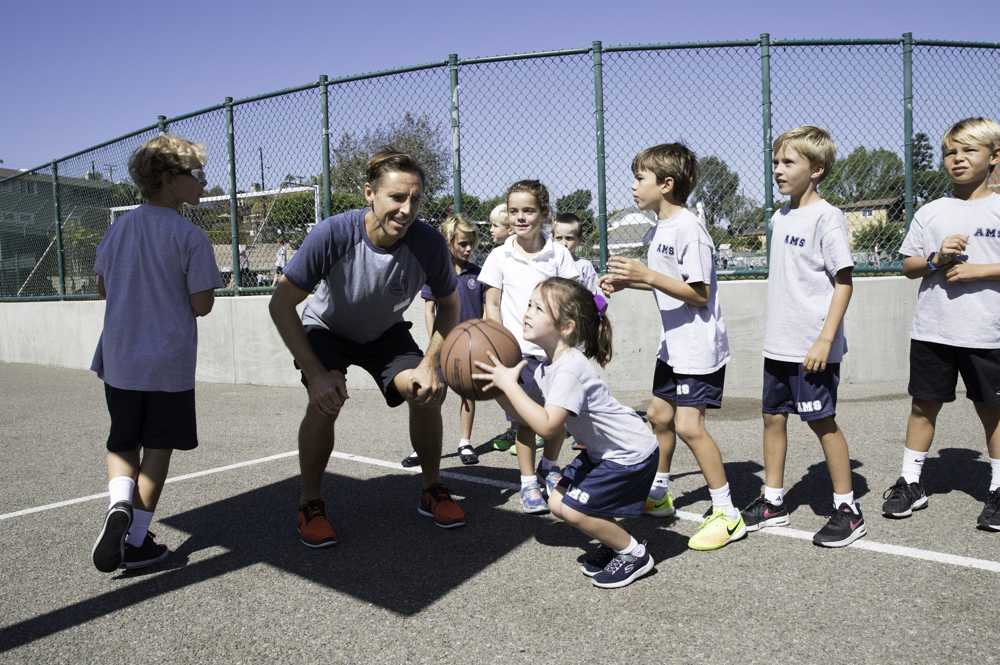 Two-time NBA MVP Steve Nash  is leaving the outdoor courts at American Martyrs School in Manhattan Beach (pictured above in 2016) to coach the Brooklyn Nets. Photo by Brad Jacobson/MadVideoLab.com

Does a touchdown in a near empty stadium make the sound of fans cheering?

That’s one of the many urgent questions to be answered tonight, (Thurs., Sept. 10), when the National Football League has an opening game like no other in its century-long history.

And it will be the start of a season like no other – for good or bad. First of all, the league canceled its entire pre-season schedule so that whatever pandemic problems crop up wouldn’t be exposed in time for the regular season to be canceled. Better to let them happen when the games are for real and the TV money is flowing, right?

The only thing traditional about tonight’s kick-off is that it features the defending Super Bowl champs, the Kansas City Chiefs, against the Houston Texans.

The game will match up KC’s Patrick Mahomes, the best young quarterback in the game – hell, make that the best QB, period, now that Tom Brady, Ben Roethlisberger, Drew Brees and Aaron Rodgers are all on their way out — against another great young quarterback, Deshaun Watson.

Both QBs are mobile, extremely accurate and born leaders. But Mahomes has that Super Bowl MVP trophy charisma to spare and the mysterious clutch juice that only the very best players have.

According to Chiefs management, they will only allow 22 percent of the usual capacity crowd to attend the game at the normally rockin’ Arrowhead Stadium. That translates to approximately 16,000 people, who will be made up of pods of up to six people.

Who are those 16,000 brave souls willing to risk becoming infected with Covid-19 just to watch the game in person instead of on their 75-inch TV screen? KC execs won’t say, but they insist there will be rules to minimize the threat of infection.

In addition to staying in their seating pods, fans will be required to maintain social distancing anywhere a line may form, whether it’s at the bathroom or the beer stand. And they will be required to wear masks when they are not eating or drinking.

Good luck enforcing that last rule – some fans literally do not stop eating or drinking the entire time they are at the game. Others undoubtedly will be Trump supporters who think the mask mandate is a deep state conspiracy and an infringement of their Constitutional right to infect or be infected.

Based on the behavior exhibited at the local Vons and Ralphs, any thought of 16,000 rabid, boozed up Chiefs fans following these rules is hopeful at best, crazy at worst. 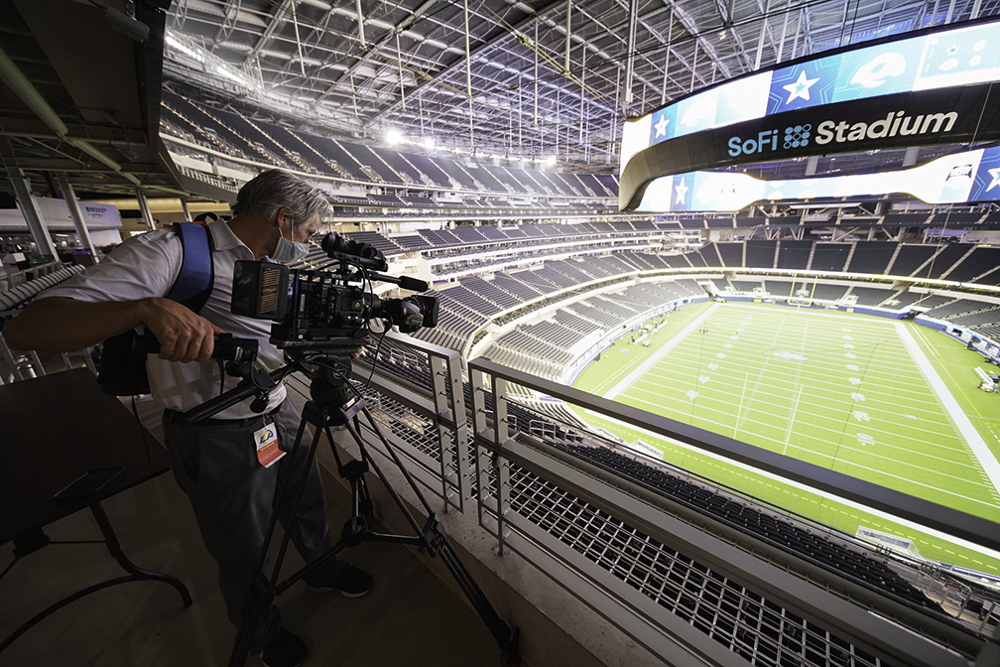 NBC camera operator Dan Marinelli scouts out camera positions inside the Los Angeles Rams/Chargers new $5 billion SoFi Stadium last week, in anticipation of the September 13 Rams game against the Dallas Cowboys. Fans will not be allowed to attend the game, but can follow the game through Marinelli’s lens. The longtime Hermosa Beach and Redondo Beach resident has received  three Emmy Awards. The first was in 2006 for Monday Night Football, followed in 2008 for work at the Summer Olympics in Beijing and in 2014 for work at the Winter Olympics in Sochi Russia. Photo by Bo Bridges

Locally, fans need not worry about their health. The Rams and Chargers, who will both play at the brand new, $5 billion SoFi Stadium in Inglewood, have announced there will be no fans at their games. At least until County health officials give their approval, which looks a long way off.

That means Rams QB Jared Goff, who was exposed last season as a middle-of-the-pack quarterback once star running back Todd Gurley’s knees were shredded, won’t have to face the boos surely coming his way when they start losing.

The Chargers should be grateful too. They’ll be starting perennial retread Tyrod Taylor, a decent runner and sub-par passer, while they wait for first round draft pick Justin Herbert to prove himself ready to start at the highest level.

You say Goodbye, I say Hello

Long-time Manhattan beach residents were involved in two of the most surprising stories in pro sports this week. First came the stunner that Hall of Fame point guard Steve Nash, frequently sighted at the Live Oak basketball and tennis courts since he moved here in 2012, had been named the new coach of the Brooklyn Nets.

The two-time NBA MVP who had never been a coach of any kind at any level, brought two main qualifications to the job: he was a big name, unlike the guy he was replacing, also a former NBA point guard named Jacque Vaughn, and he had bonded with superstar Kevin Durant when Durant played for the Golden State Warriors and Nash was a “consultant” to the team. Given that Durant and his sidekick, point guard Kyrie Irving, are two of the most talented-but-toxic head cases in the NBA, Nash has his work cut out for him,

Naturally Stephen A. Smith, the bombastic, shoot-from-the-lip ESPN host, had an immediate hot take: “This is white privilege. This does not happen for a black man.” Nash, to his credit, did not get down in the racial gutter with Smith.

A couple of days later came the equally stunning news that Josh “Chosen” Rosen, who grew up in Manhattan Beach but bypassed Mira Costa High School to play for Bellflower St. John Bosco, had been cut by the Miami Dolphins.

The 6-foot-5 Rosen, who lit up the Rose Bowl while starring at UCLA, was the 10th pick overall in the 2018 NFL draft by the Arizona Cardinals. But in the Darwinian, eat-or-be-eaten world of pro football, the Cardinals gave up on him after just one year, dumped his contract on the Dolphins, and promptly drafted Kyler Murray first overall to be their quarterback of the future – the same tag they had given Rosen just 12 months earlier.

The Dolphins likewise gave Rosen one year to prove he merited his big contract, but he failed to deliver and that was that. It’s likely he’ll get at least one more chance in a league where quality quarterbacks are always in demand, but rarely do you see a stud quarterback fall so far so fast.

Indeed, Monday morning the Tampa Bay Buccaneers signed Rosen to their practice squad, which means he is not officially part of their roster, but could be activated at some point in the season. At the tender age of 23 he is officially on the pro football scrap heap, hoping for another chance to prove his high school and college stardom was not an optical illusion.

So it goes for the two local hoops squads officially designated as locks by the LA Times to meet in the Western Conference Finals, with the winner advancing to the NBA Finals.

The epic showdown could still happen, but both teams are facing serious obstacles that make it more likely that only one will make it. The biggest problem: they are both facing teams with more good players than they have. The question is can their superstars — LeBron and Anthony Davis for the Lakers, and Kawhi and Paul George for the Clippers — carry their teams to the long-awaited throwdown.

Man-on-a-mission LeBron and happy-to-be-a-wingman AD play great, to one degree or another, in virtually every game. But the rest of their squad is so weak that it’s not crazy to suggest that a team of five Live Oak All Stars – Big E, C-Pal, Syracuse Scotty, Darnell and Blake – could give them a run for their money.

The Clippers problem is a little different. They have one of the deepest teams in the league with super-subs Lou Williams and Montrezl Harrell coming off the bench to wreak havoc. But George – or Playoff P, as he named himself several years ago to his eternal regret – has only played like a superstar in one game out of the eight the Clippers have played so far. Kawhi has played like a superstar in seven of the eight games, but he can’t carry them over the finish line without some serious help from Playoff P.

It looks like a long hard slog to the promised land for both teams.