The Los Angeles County Surf Life Saving Association won the Jersey Mike’s USLA National Championship Howard Lee Trophy on Saturday, in Hermosa Beach, for the 33rd time in the 33 years the competition has been held. California State Lifeguard Association was second and Sussex County, of Delaware, was third. Photo by Joel Gittelson

There will be a few scars and some long-range consequences yet unknown, but he will live to coach another season.

In the process the long-time Manhattan Beach resident learned the most important lesson for an employee in a high-stress workplace: when a big shot with leverage on your company tries to get you fired, the key to survival is having a boss who has your back no matter what.

If you’ve been doing your job well, and doing it properly and ethically, a good boss will back you all the way no matter who is putting the pressure on them to fire your sorry ass.

Even when the bigshot doing the pressuring is Kevin Durant, the best player on the team that Nash coaches, the Brooklyn Nets.

Durant also happens to be one of the world’s three best basketball players, along with LeBron James and Giannis Antetukompo.

But even he couldn’t get Nash fired. 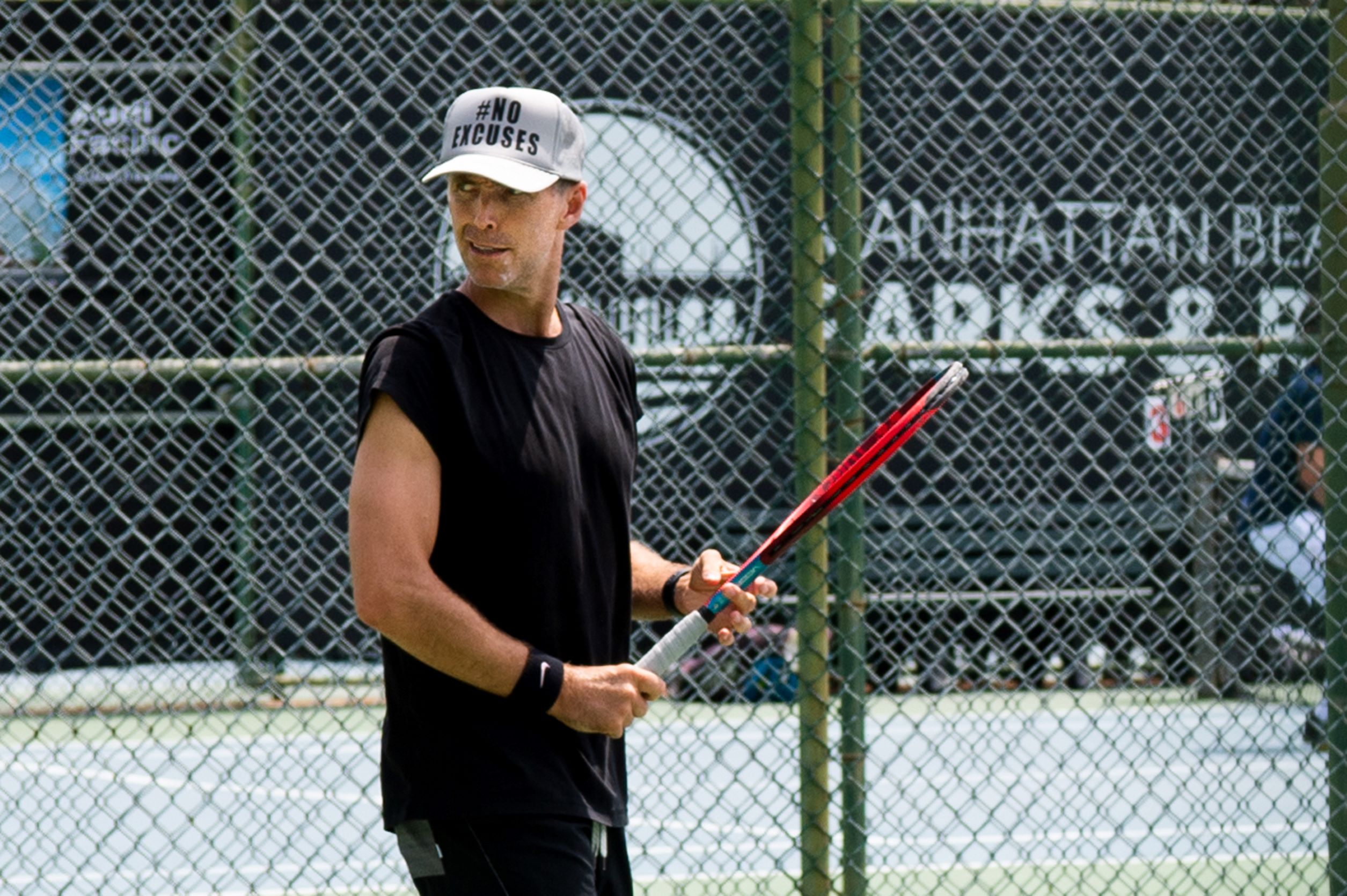 This week saw the culmination of an ugly drama that began six weeks ago when Durant demanded a trade out of Brooklyn – even though he signed a four-year, $193 million contract extension at the beginning of last season. That extension kicks in when the 2022-23 season starts next month.

A month and a half ago Durant very publicly said he wanted to be traded after the Nets were swept in the first round of the playoffs by the Boston Celtics. The Nets were pre-season favorites to win the NBA title because they had two great players: Durant and Kyrie Irving.

The first-round playoff sweep was devastating for the entire team: players, coaches and front office execs. But especially so for Nash, who was in his second year as Nets coach and had been facing a chorus of doubters from the moment he was offered the job back in the summer of 2020.

At that time he had no coaching experience other than helping the little kids at American Martyrs School learn the fundamentals of shooting a basketball, something Nash did well enough when he played for the Phoenix Suns to become a two-time NBA MVP.

Immediately after Durant issued his trade demand in June the offers started pouring in from the NBA’s 29 other teams. After all, who wouldn’t want one of the world’s best players on their team?

But then a curious thing happened: no deal materialized. In fact, no potential deal got beyond an initial phone call or two.

Well, there are no secrets in the NBA, where every team has a swarm of media that covers them. Naturally, trusted source relationships develop between certain reporters and certain team execs. It has always been that way in pro sports, where big jobs and big money are on the line, and that dynamic is never going to change.

Word soon leaked from the 29 other teams that the Nets were demanding a king’s ransom: a package starting with a certified All-Star player, plus an All-Star caliber player, a couple of other good young players who might develop into stars, and at least 3 or 4 first round draft picks in return for Durant.

Naturally, no team made any such offer. What would be the point of getting a title-ready player like Durant at age 33 if he’s coming to a team stripped bare of any other great or even any good players.

No matter how great he is, a single elite player is not going to carry a team to a title or even close to it. Just look at Kobe Bryant from the years 2005-07. The Lakers were Kobe and a bunch of no-name journeymen, and the team never even sniffed a serious playoff run despite Kobe averaging 35 points a game. It was only when the Lakers responded to Kobe’s trade demands by getting him a legit sidekick in Pau Gasol that the Lakers went on to win two of the next three NBA titles while making the Finals all three years.

For six weeks the NBA’s very active grapevine floated potential deal after potential deal that went nowhere. In most cases, the proposed deals were so absurd the suspicion exists that bored media members, stuck in a mid-summer slump with no games and few trades to cover, were just making them up to fill their columns and broadcasts. It’s shocking to think such a thing could happen, but it has been known to occur.

Like a sun-flower blossoming in the noon-day sun, it quickly became clear that the Nets had no real desire to trade Durant, not least because he had four years remaining on his new $198 million contract. Why the hell should they let him out of his contract that hadn’t even kicked in yet?

The Nets, meaning owner Joe Tsai and general manager Sean Marks in particular, were laying the ground work to say to Durant just before training camp opens in September: Hey, we tried, but there’s no deal out there for you that works for us. So we’re stuck with each other for the next four years and let’s make it work.

Meanwhile Durant’s frustration grew and grew. He admitted on one of the many sports podcasts out there that he smokes pot every day during the off-season, but his daily weed consumption was doing nothing to make him more patient to get the hell out of Brooklyn.

So this week Durant went straight to the top: he arranged a meeting with Nets owner Joe Tsai, a Taiwanese-born Canadian tech-mogul worth an estimated $9 billion.

The meeting was supposed to be a clear-the-air lovefest that would pave the way for Durant to return to the Nets and for the team to promise they would be more sensitive to his concerns.

Indeed, the gist of the supposedly super top-secret meeting was all over the internet within a couple of hours after the two men went their separate ways.

Bottom line: Durant demanded that GM Marks and Coach Nash be fired immediately. Then and only then would he consider returning to the team and honoring his contract.

And even then, only if Tsai said pretty please.

That’s the kind of crazy demand a superstar like LeBron James can – and has – made when he is in the last year of a contract. He did it twice in Cleveland and he did it to Lakers Coach Frank Vogel just last spring. When a team is faced with the threat of losing their superstar in the next 12 months with nothing in return, they will typically do whatever the star wants.

But no one who still has four years left on their contract has ever made such a demand, and Tsai didn’t get to be a multi-billionaire by letting his employees issue ridiculous ultimatums and roll right over him.

So he decided to call Durant’s bluff. A few hours after Durant’s demands became public, Tsai issued the kind of response any self-respecting owner would have to issue: Fuhgeddaboudit.

That, of course, was a Brooklyn colloquialism. The actual words: “Our front office and coaching staff have my full support,” Tsai tweeted on Monday. “We will make decisions in the best interests of the Brooklyn Nets.”

And just like that, Nash knew he would have a third season in the first coaching job he has ever had.

The real question, however, is this: why in the hell would he want a third season of this madness.

They’re getting the basketball band back together at Redondo Union High School.

And that’s bad news for the rest of the Bay League.

Then the news broke this week that former boys basketball coach Reggie Morris was returning.

The next step, as surely as day follows dawn, is sure to be a stream of talented players coming to the school from out of the district. It will be a talent infusion that will transform the slumping program back to its former glory.

You can take it to the direct-deposit bank.

Morris, the son of LA hoops coaching legend Reggie Morris Sr., led the Sea Hawks to four straight Bay League titles from 2012-2016 and a state championship in 2013 before leaving to become an assistant at Loyola Marymount.

By the time he left Redondo he had established such a great talent pipeline for the Sea Hawks that they went on to win four more Bay League titles before arch-rival Mira Costa won the title in Coach Neal Perlmutter’s second year back in the 2019-2020 season, just a couple of weeks before the pandemic hit in early March.

Since his one year at Loyola, Morris spent time coaching at Culver City and Fairfax High School in the City Section as well as at Pepperdine University.

As a high school coach, Morris put together a record of 339-126 over 15 seasons and coached future NBA players Russell Westbrook, Dorell Wright and Delon Wright.
He and his father, Reggie Sr., are the only father-son combination to win California state high school basketball championships.  His father coached Manual Arts to the Division I crown in 1988.
In 2011, Morris Jr. took over the head job at St. Bernard High School. The Vikings went from a four-win season before he arrived to 26-9 and 25-8 in his two years there, which included a runner-up finish at the 2011 Division V state championship and a 2012 CIF 5AA Southern Section title.

The turnaround at Redondo may not be quite as quick, but it will surely happen. That’s because of the kind of close connections he has developed with SoCal AAU teams, which is where the real talent development goes on for players aged 8-14. By the time they’re ready to enter high school, most future stars have already been identified and recruited by numerous high schools.

And that’s where Morris really excels.
A Los Angeles native, Morris attended Westchester High School for three years before graduating from Locke High School in 1996. He played for his father there and averaged 15 points while earning all-league honors.

“Reggie is a great coach who has had success everywhere he’s been,” Perlmutter said. “Redondo hasn’t been quite where they were the last few years, but I’m sure he’ll get them back to being one of the top teams in the south bay and beyond.”

But he insisted Morris’s return won’t change the way his team will approach the upcoming season, which starts in two months.

“It doesn’t change what we’re doing on our end. Our program is going in the right direction,” he said. “I’m sure we’ll be even more ready than usual for the two league games with them in January and February.”