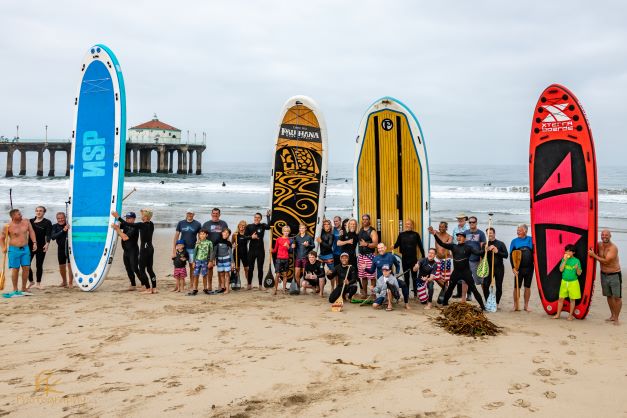 Are you wondering why USC and UCLA shocked the sports world Friday by announcing they are leaving the PAC-12 Conference to join the Big Ten in 2024?

Forget all the blather coming from both SoCal schools about “shared values” with the Midwest-based Big Ten schools, and doing what is best for their so-called “student athletes.”

First of all, the only “student-athletes” left in college are the badminton team members and maybe the sailing team.

Everyone else, from the gymnasts to the hoopers to, especially, the football players, are chasing whatever money they can get — pure and simple.

And why shouldn’t they? Who among us capitalists can blame them?

It’s not greed, as many critics are saying. It’s wanting to be paid a fair wage for putting their health – present and future — on the line and providing entertainment for the high-paying customers.

That’s the disparity that the new NIL – name, image and likeness – rules are supposed to rectify. By allowing college athletes to seek marketing and sponsorship deals before they turn professional – if they are even part of the lucky few who are good enough to turn pro — the intent was to adjust the glaring imbalance between fat-cat college execs living high off the hog, and the college athletes they recruit and oversee.

The athletes, often from poverty-stricken backgrounds, are usually forced into a hand-to-mouth existence while they subsist on scholarships consisting mainly of room and board.

The new NIL rules have been in effect for little more than a year, but already they are having far-reaching, unintended consequences.

Namely, that the gold rush for the athletes – essentially formalizing and monetizing the long-standing reality that college teams are minor leagues feeder systems for pro teams – has increased the greed factor among school presidents, athletic directors and everyone else who has anything to do with administering college sports programs.

Just take a look at UCLA’s athletic budget. Because it is a public university supported by taxpayer funds, its records are open to the public. According to its latest financial filings, UCLA has a $108 million deficit in its athletic department. They’ve got to fill that hole somehow, and they couldn’t possibly make up that shortfall by charging a few more dollars for their already over-priced seats at the Rose Bowl.

USC is a private institution, so its financial situation is not so transparent. We don’t know if its Athletic Department has a similar deficit, but we do know from the recent Varsity Blues “fake athletes getting undeserved admission” scandal that USC has plenty of rich parents and alumni who are willing to bend the rules and donate huge sums to help the Trojan athletic cause.

It’s simple: the PAC 12 has been left behind in the national rush to get into Power 5 Conferences like the Big Ten and the Atlantic Coast Conference and the Southeastern Conference.

That’s where the action is, those mega-conferences that for the last five years have been poaching the prestige programs, the big-name programs, from lesser conferences all over the country. So no one should be shocked – shocked! – that this virus has finally hit the PAC 12 right here in little old Los Angeles.

The Power 5 Conferences are where the big TV bucks are. The Big Ten is reportedly negotiating a $ 1 billion-plus contract for the broadcast rights to its games. That means sponsors are eager to spend big money on big games like USC vs. Michigan – and both the Bruins and the Trojans want to be part of those big games no matter what it takes. Their share of that broadcast bonanza will be more than twice what they would get from the PAC-12 broadcast rights.

It doesn’t matter that their athletes are going to be spending more time in airplanes traveling to places like Michigan and Ohio State than they do in the classroom actually learning reading, writing, and the philosophical differences between Kierkegaard and Kant.

Maybe we should just delete the word “student” from the absurd “student-athlete” formulation and be done with it. Just call them what they are – “professional minor league players” working hard to make it into the big leagues.

That is the logical next step.

This story is far from over. The transformation of major college athletics from sham amateurism to full on professionalism is long overdue and it’s just getting started.

There will be plenty more unintended consequences, but at least there will be no more hypocrisy about what’s really going on in the locker rooms and front offices of brand-name programs.

Oh, and one last point. The Big Ten already has 14 teams in it thanks to its relentless poaching of prestige programs over the last five years. But for some crazy reason they have stuck with the ancient Big Ten name.

So when UCLA and USC arrive why not just call it the Sweet Sixteen?

This definitely isn’t what Steve Nash signed up for when he agreed to coach the Brooklyn Nets.

Whatever championship dreams Nash had – and he told All Ball last summer that every day of his life now is dedicated to winning the Nets their first-ever NBA title – those dreams died a sad and sudden death this week when Brooklyn superstar Kevin Durant demanded to be traded away from the Nets, despite having signed a new four-year contract extension just last year.

Who could have seen that coming?

Two years ago Nash agreed to leave his Paradise Found – also known as Manhattan Beach – for the asphalt jungles of Brooklyn.

What would entice Nash to leave the laid-back life he had in the Beach Cities for his first coaching job at any level?

Mainly it was the chance to coach Durant – one of the top 10 NBA players of all time – and Durant’s BFF sidekick, Irving, one of the top 15 players in the NBA right now.

Then a couple of months into Nash’s first season, the Nets also acquired James Harden, yet another sure-fire first-ballot Hall of Famer and a 3-time NBA scoring champion. All Nash had to do, the cynics said, was to roll out the basketballs at practice and make sure the water bottles were filled at the games.

Then reality quickly set in.

Durant was everything he was supposed to be: a true professional who showed up every night ready to play, one of the best players if not the best player in the league.

Harden? He showed up fat and out of shape after forcing his way out of Houston by playing as badly as he could. The Harden trade cost the Nets a couple of good young players and four future first round draft picks, but hey, now the Nets were heavy favorites to win their first-ever title. When the team is owned by Joe Tsai, the Ali Baba tech mogul worth an estimated $9 billion, you don’t mind paying a little extra for a championship.

But all those calculations ignored a crucial reality: Irving is the biggest knucklehead in the entire NBA and possibly in all of sports, amateur or pro.

A short synopsis of his hoops history: due to a series of injuries, he played only 11 games as a freshman at Duke, but still his superior talent was so obvious that he was drafted first overall by the Cleveland Cavaliers, who had just been deserted by LeBron James when he took his talents to Miami’s South Beach.

During his first four years in the NBA the Cavaliers continued to suck, but Irving was the Rookie of the Year and increased his scoring average every year.

In 2014, LeBron noticed that his Miami sidekick and supposed BFF Dwayne Wade was fading fast, while the Cavaliers had one of the best young players in the entire league in Irving. So he bailed on the Heat and said he was coming home to fulfill his pledge to win his hometown of Cleveland (it’s actually Akron, but it’s close enough) its first-ever NBA title.

The Cavaliers fulfilled LeBron’s pledge in 2016 when Kyrie hit the game-winning 3-pointer late in game 7 against the Golden State Warriors. The clutch shot made his reputation, but it also blew up his ego to the point he no longer wanted to be Robin to LeBron’s Batman. He said he wanted his own team to lead.

So he forced his way out of Cleveland to Boston, which had two young stars in Jayson Tatum and Jaylen Brown. It seemed a perfect situation for Kyrie, to the point that he stood before a packed house on opening day 2018, and promised the crowd he would re-sign with the Celtics.

But the ever-unhappy Kyrie reneged on that promise and hooked up with Durant, his BFF. They looked around the league and settled on Brooklyn as the fortunate team that would get both their services.

Before long Kyrie was acting the way LeBron had in Cleveland – telling the front office who to sign and who to trade away. But then he took it a step further, deciding when he would play and when he would sit out to rest his frail body, or his superior mind.

Harden was the first to get fed up with Kyrie’s diva behavior, demanding a trade early this season to Philadelphia. Then Kyrie announced he was not going to get vaccinated, which meant he couldn’t play in New York, which had a mandatory vaccine mandate for indoor workers.

By the time Kyrie finally returned as a full-time player late in the season, the Nets were an out-of-synch mess and were swept in the first round of the playoffs by the Celtics.

Once the season was over, Kyrie demanded a full max four-year extension of his contract, which had a player option for next season at $36 million.

Nets management, including Nash, was fed up with his attitude and refused to give him an extension. Then they gave him permission to seek a trade around the league.

Big surprise – only one team was truly interested. That was the Lakers, who had their own problem child that they were eager to trade in point guard Russell Westbrook, due to make $47 million next season.

But the Nets didn’t want Westbrook any more than they wanted Kyrie. As the conflict came to a head with public barbs on both sides, Durant threw up his hands Thursday night and said he wanted out too. His complaint: while they had treated him fairly, Nets management – including Nash – had not done enough to understand and work with Kyrie, the sensitive hoops artist.

At week’s end Kyrie had opted into his $36 million contract for next year and the Nets were fielding offers for both Durant and Kyrie. As the offers started to come in, the trend was clear: everyone wanted Durant, and no one except the Lakers wanted Kyrie.

Prediction: Durant will be traded, probably to Phoenix, for a huge haul of good players and high draft picks.

And Kyrie? He’ll be traded to the Lakers where he can be reunited with LeBron. In return Westbrook will be headed to Brooklyn along with both the Lakers 2027 and 2029 first round draft picks.

After destroying the Cleveland Cavaliers in five years, the Boston Celtics in just two years, and the Brooklyn Nets in three years, Kyrie will get his shot at screwing up the Lakers.

It’s going to be a bumpy ride.

But there is one piece of good news: Nash won’t have to deal with Irving ever again. ER 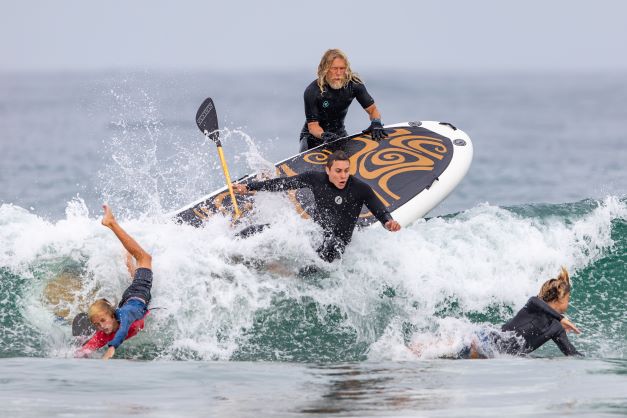 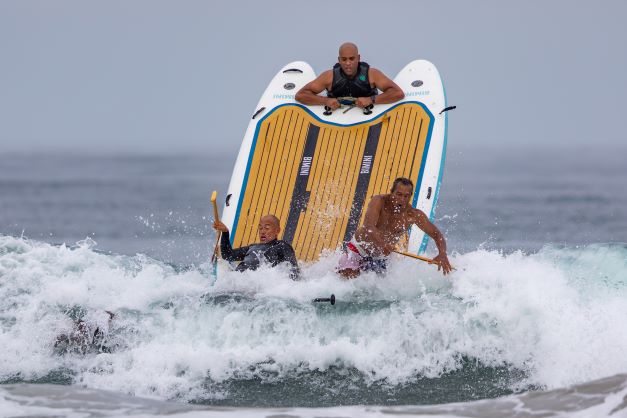 Why it’s good to be the steersman. Photos by Dave Weldon/Rich Kanemitsu (PhotoShooter.org)