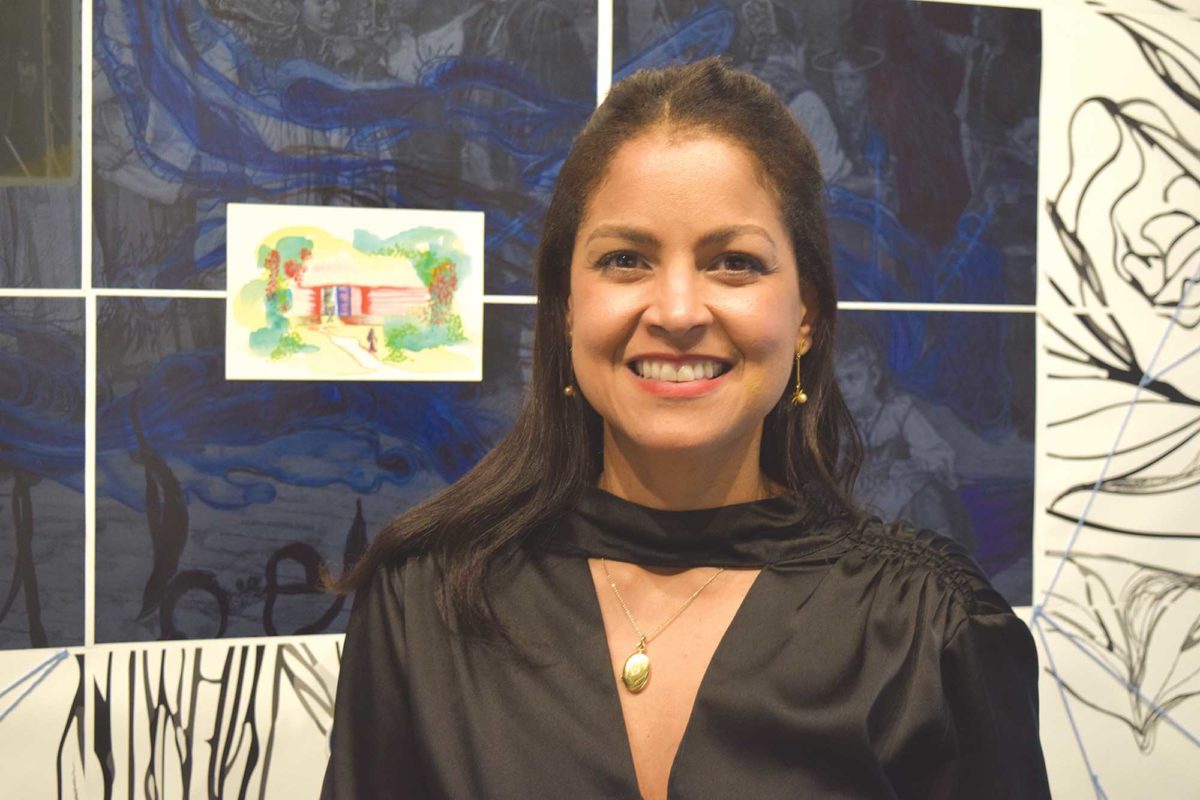 From Hispaniola to the shores of L.A.
Works by Amelia Amell are on view at the Manhattan Beach Art Center

It doesn’t surprise Amelia Amell when I tell her that, to the best of my knowledge, she’s the first person I’ve met from the Dominican Republic. And furthermore, I add, if I end up with a bad impression of you then I’ll have a bad impression of the entire country. Because, right now, you’re representing everyone and everything there.
We’re sitting in her home-studio at the extreme north end of El Porto, and just a block up from the ocean.
“Yes,” Amelia says with a laugh, “I hope at the end of the day I get to represent the Dominican Republic,” meaning “in a favorable light.” And she does, most definitely.
But on her artist statement, as she points out, she stresses that she was born on the island of Hispaniola, an island in the Caribbean divided into two nations, Haiti and the Dominican Republic. And the reason she stresses this is because in her view the history of the entire island takes precedence over the history of its two halves, as different as they are.
Speaking of halves, Amelia Amell is currently sharing the spotlight with Jesús Chaidez, from Culiacan, Mexico, in “Two by Two: Stories Beneath the Surface,” which opened last Friday evening at the Manhattan Beach Art Center. It’s on view through April 14.

Early art and education
Hers was a large family (10 brothers and sisters), but one that was highly supportive, and Amelia seems to have had the best education possible.
You do so many kinds of art. Did you begin as a painter?
“I started doing classical work when I was 14,” she replies. “I began with pencil. I had a teacher named Alberto Bass; he’s still alive and he was a pretty good teacher. I first began drawing, and then he took me to color drawing, and then acrylic and then oil.” That was in Santo Domingo, back in 1991.
A few years later, Amelia received her Bachelor of Arts in Communication and Advertising.
“I studied advertising because then in the Dominican Republic we didn’t have a major in fine arts. So when I went to college I said, ‘Let me see what class has more art in it,’ and it was advertising.”

Both of her parents were born in the Dominican Republic, although her paternal grandfather was from Cataluña, Spain. After college, her parents sent her to Spain so that she might acquire some familiarity with the culture. She did, but found Spain to be “too close-minded” and returned home.
Eventually, Amelia set her sights on bigger things, and at the age of 22 or 23 she left her island for New York City.
“I wanted to go and live as far (away) as possible,” she says. “I felt there was so much more for me to discover, and I wasn’t able to grasp it where I was living. It just felt that everything was too small for me.
“But right before I left I did what I call the first graphic design art exhibit made in the Dominican Republic. The exhibition had 10 pieces and they were all graphic design, but they were digital art. I printed the work four feet by three feet, each one, and I used collage, I used photographs and text and drawing, and everything was scanned and created in a digital form. That really marked me, because it was right before I left and it was a moment of breaking free. I was upset, I wanted to leave the country. I was just rebellious at the moment.”
Although she’s lived in the U.S. ever since, Amelia didn’t really abandon her homeland, and in fact she’s carried it with her, close to her heart and everywhere she’s gone.
“Absolutely,” she says. “I think that there’s something about the soul of the country, because it’s such a small island. It’s like everything is living still inside of me. It’s like I feel I can bring the sunshine to wherever I am.”
As for those she left behind, “It’s such a rich family and it’s so loving,” Amelia says. “It takes a lot of courage: I don’t know where I’m getting it from, this courage to be away from that loving… That’s why I say that I carry it with me wherever I am.”
A profound loss for her, and one reflected in her artwork, was the sudden death of her mother. “My mother was such a loving person, supporting… Up until now I haven’t met someone as open in the heart as she was.”
Amelia shows me what might loosely be described as a family altar, a collection of mementos, and in particular an old and finely crafted photo album with pictures of various relatives and also her parents when they were young. For all the digital technology we have today, there’s still nothing like personal artifacts that have been carried or handed down through the years.
In her artist statement, Amelia says of her art that “these creations pass through the kaleidoscope of my life, emerging from the unexpected death of my mother and tinted by the nature of the relationships that surround me. From the darkness of loss to the reverence of mother earth as love itself, these are the source of my inspiration.” 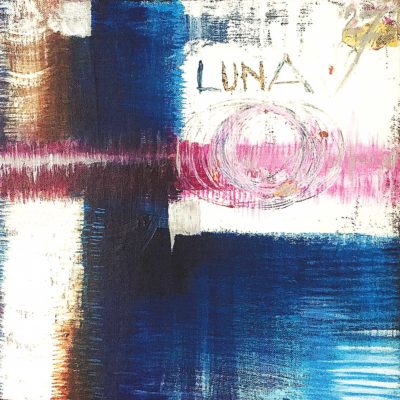 On the move
When Amelia first arrived in New York she put aside her art, “because I was finding my way as a young female immigrant in the United States.” She expresses how grateful she is to her family for her education, since without it she might not have so easily found work. While in New York, Amelia adds, “I studied magazines and publishing. I wanted to learn more about being an artist and an illustrator for publishing, and that’s what I did.”
Then one day, while looking for another job, she was referred to someone in Austin, Texas, who had an advertising agency, “and he told me, ‘Well, if you can be her tomorrow in Austin…’ And I’m like, I’m there!”
It was more than just a big step, it was quite a leap: “Landing in Austin and now knowing where I was. Never heard of Austin before,” Amelia says. “I knew Dallas, I knew Houston, but I didn’t know about Austin.
“I worked there and through them I ended up coming here because they had a small satellite office in L.A.”
She’d been in the United States about four years when her mother died. “And then everything came back to me,” Amelia says, “and I began to create art again and find ways to collect myself and create what I always knew how to express.”
Amelia points to the walls around us, on which hang several large paintings. One depicts an American eagle covered in oil that she created after the major oil spill in the gulf of Mexico. Another shows a monkey sitting within the opening of a tree. “For me it’s Lucy,” she says, referring to our earliest human ancestor. Only a small percentage of genes separates us from the primates, “but in nature we are all connected and we need to be kind to everything that surrounds us, trees, animals…” Did I mention that Amelia also has a Masters in Spiritual Psychology? She acquired it nearly a decade after her Masters in Multimedia Design and Communication from the Tracor Arts Institute in Madrid.
The paintings displayed in her living room are quite different from what’s on view at the Manhattan Beach Art Center, which includes video projection and art collages. “It’s hard sometimes when people ask me, What do you do? What medium do you use? And I want to say ‘Everything.’” 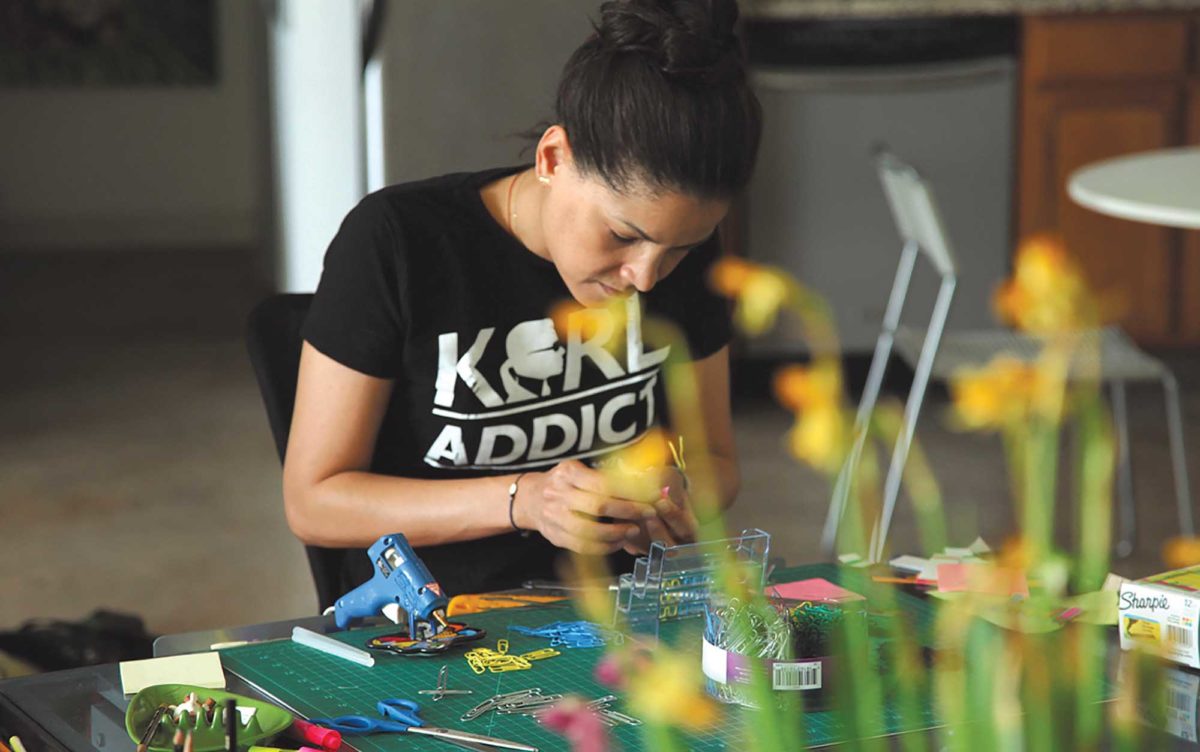 Amelia Amell in her studio. Photo courtesy of the artist

From Manhattan to Manhattan Beach
Amelia has now been in the L.A. area for 16 years, the last three in Manhattan Beach. However, some burnout, some fatigue, entered her life, and she opted for a change.
“Ten years ago, I was so disenchanted about working for advertising that I left it all and said I’m just going to be an artist. That’s when I created a lot of big pieces. But then I found myself with no money and actually no home, living with friends, and I was ready (to move on). I was like, Well, maybe L.A. is not for me.”
She stayed, and returned to work, and currently Amelia is an art director for an advertising firm in downtown Los Angeles. “I pretty much work with brands, creating advertising, and I do the art for them, whatever they need.”
Right now, she’s putting in at least 50 hours a week. The difference, she says, is that these days she’s doing it happily. At the same time, “I’m not going to sacrifice my art. I’m in front of a computer so I do research to create art. That’s why a lot of my things end up being digital.” If her job involved pencils instead of computers, “I probably would be doing drawings. So I work with what’s available because what is important is to keep the creative outlet moving and living.”
Her output is varied, and finally the rest of us have a chance to see it firsthand. Did Amelia ever imagine, when she left the Dominican Republic for New York, then Austin and L.A., that it would be here that she’d find a willing venue and an audience?
“I never thought that Manhattan Beach was going to be the place where I was going to have the opportunity to show my art,” she says. But that’s precisely what’s happened. To learn more about her and her work, go to ameliaamell.com.
Two by Two: Stories Beneath the Surface, featuring painting, prints, drawings and more by Amelia Amell and Jesús Chaidez, is on view through April 14 at the Manhattan Beach Art Center, 1560 Manhattan Beach Blvd., Manhattan Beach. Gallery hours, Wednesday through Saturday from 10 a.m. to 6 p.m. and Sunday from 10 a.m. to 5 p.m. Call (310) 802-5440 or visit citymb.info/exhibition. ER