A local production of “Rent” is Money in the Bank 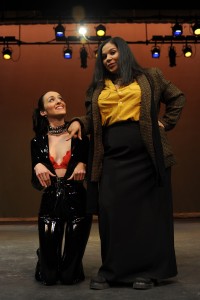 One of the first questions I asked Bill Georges, director of the El Camino Theatre production of Jonathan Larson’s “Rent,” was, “Did you take the girl out of Hicksville?” and to my delight he said, “Absolutely!”

I am a purist, having seen “Rent” 18 times – 11 times with the original cast at New York’s Nederlander Theatre on Broadway; thrice at the Pantages here in Hollywood, including last year’s revival with Mark and Roger played by original cast members Anthony Rapp and Adam Pascal; once in Las Vegas; once in London; and in a few theaters in between. Hicksville is a town on Long Island, NY, not a village full of hicks as any New Yorker will tell you. The line works, it’s funny and we all get it.

Unfortunately, many productions I have seen outside of New York change the line to, “You can take the girl out of Jersey…” not as funny. To me, changing that line is akin to having Roman Magistrates in movies speak with a British tongue: Yes, subtitles may be annoying but Julius Caesar saying, “Et tu, Mate?” doesn’t really work, does it? The fact that Georges did not change that line, gives great hope that this production will rock.

Jonathan Larson penned his modern day “La Bohème” back in the early 1990s, a time when the fear of AIDS kept many in the closet, gay or not.  “Rent” is set in the bohemian section of New York City’s Lower East Side called Alphabet City. Through brilliant lyrics and fast-paced rock music, “Rent” tells the story of a group of impoverished artists struggling to survive and find a voice to give meaning to their young lives, many of which stand to end too soon due to drug addiction and AIDS. Like Giacomo Puccini’s opera “La Bohème,” we meet our young artists on Christmas Eve and follow them through a year in the life that is lived day by day: “No day but today,” is the mantra by which they live. 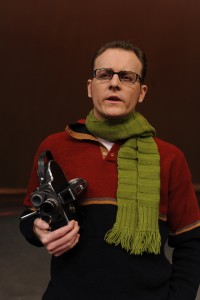 Mark, a struggling documentary filmmaker whose performing artist girlfriend Maureen leaves him for a tough Harvard educated lawyer named… Joanne, is roommates with Roger, a tortured songwriter “whose girlfriend April left a note saying we’ve got AIDS, before slitting her wrists in the bathroom…” Roger falls for Mimi, a heroin addicted HIV-positive stripper, but struggles to move his life forward with her because he doesn’t want baggage without lifetime guarantees; Mimi, who lives for the day, tries to convince him: “I’m looking for baggage that goes with mine.” Love, life, struggle, strife; although the story is heavy, the music rocks and the dialogue/lyrics have some great humor which is enhanced by character nuance, some written, some adlibbed. Angel, the HIV-positive transvestite is the glue that holds this unlikely family together. He… she, embodies pure joy. She lives for the joy that is today for there is no day but today and she teaches the others to measure their lives in love because at the end of your life, love is all you have and love is all you need.

“Rent” has evolved over the past 15 years, which has been interesting for “Rent-heads,” like myself and Director Bill George, an artist by trade, well known for his success in set design, and I was curious how this production would stand up or stand out.

“This production runs true to the original,” he says. “Although there are slight differences in set design and band placement, it rocks like Jonathan intended!” One reason this rock opera gained cult status back in New York has to do with the eerie and untimely death of its creator, Jonathan Larson. After 12 years of his own struggle as a “starving artist,” many of those years spent shopping “Rent” around off-Broadway, Larson’s dream started to take flight when “Rent” ran a limited three-week workshop at the New York Theatre Workshop in 1994. Finally, two years later, “Rent” officially opened at the same off-Broadway theatre on January 25, 1996. 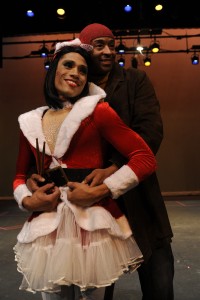 Tony Melson and Edward Jenkens as Angel and Collins. Photo by Dwight Ueda

Tragically, Jonathan Larson died suddenly the night before. Three months later, the production moved to Broadway’s Nederlander Theatre and over the next 12 years won every major award in the Tony for best musical and the Pulitzer Prize for Drama before officially closing on September 7, 2008. “Rent” remains timely and relevant even with songs like, “…we’re living in America, at the end of the millennium…” and the fact that although AIDS is still claiming lives, it is no longer the pandemic it was in the ‘80s and ‘90s, the core of the piece, love, is timeless and universal.

Tours of “Rent” have graced the stages of every major city in this country as well as countries on six continents and has been translated into every major language. El Camino College is one of the first colleges in this country to be granted the rights to present the full stage version, which opens tomorrow evening at the Campus Theatre, 16007 Crenshaw Boulevard, Torrance. Georges, who directed frequently during the 1990s, but had been focusing on set design since, has assembled a cast of young actors from Redondo Beach to Burbank, and he says there are a few who could step off the stage and on to Broadway.