…And the Band Played On 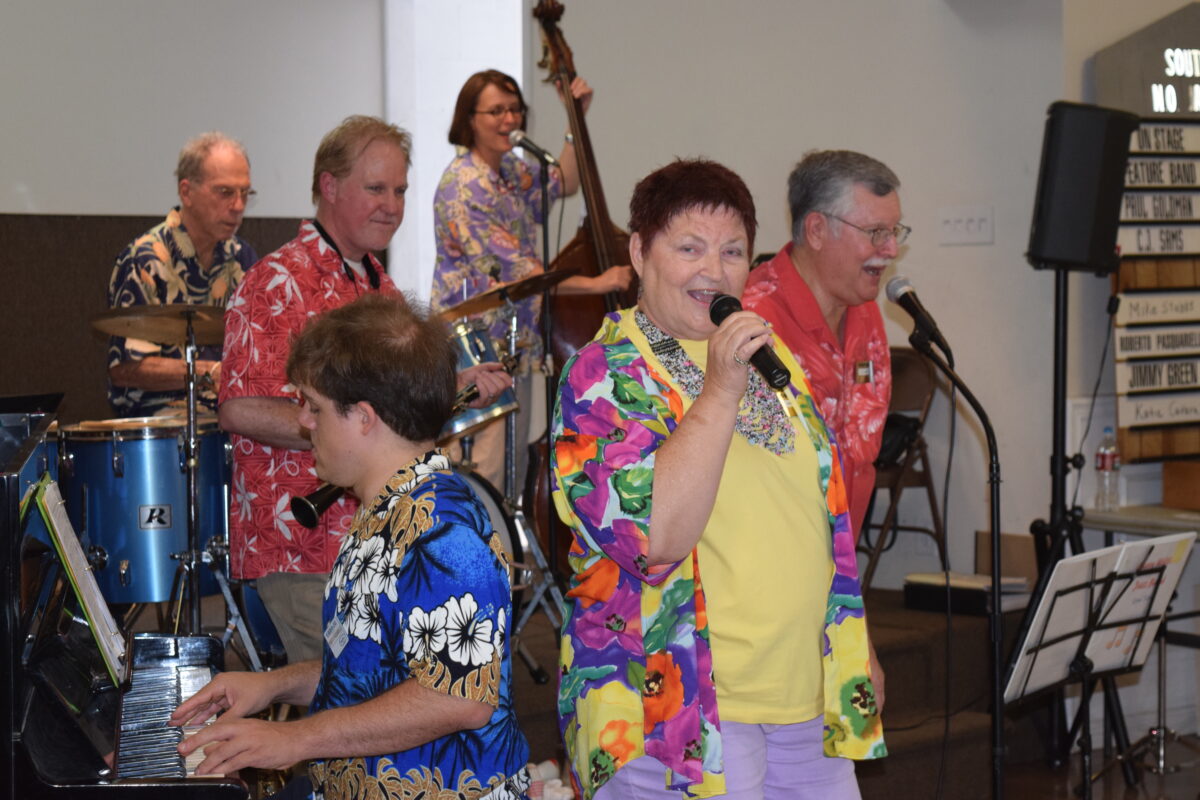 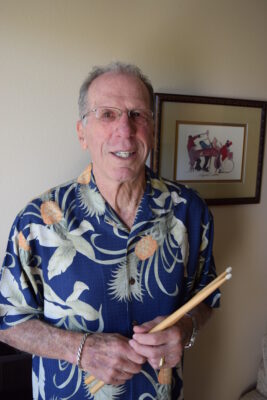 Musical styles come and go. Some recede and some revive, raising their heads a little, and then it’s up to the devoted few to keep fanning what small flames persist. Early, traditional jazz often seems like it’s struggling to remain vivid and relevant, and yet it’s tenacious, and not letting go.

“This music’s been around since the early 1900s,” says Paul Goldman, “and it has been in vogue and out of vogue depending on the years. Right now it’s kind of waning.” However, he adds, “It will never go away because it’s a style of music of the United States.”

Which is a way of saying that traditional jazz is music of the ages, for the ages, and even for all ages — although audiences do tend to be older because, as Goldman adds, “they’re the ones who know the music and have grown up with the music.”

Paul Goldman is the president of the South Bay New Orleans Jazz Club, which meets on the second Sunday of every month at the Knights of Columbus Hall in Redondo Beach. And the club, no Johnny-come-lately, has been active for 53 years.

Bands that specialize in playing traditional jazz can spring up anywhere, anytime, although there seem to be more of them in cities like Chicago and New York and of course New Orleans. Also, sticking solely to California, there are important jazz festivals — and, remember, jazz covers a lot of turf but we’re talking traditional, Dixieland jazz — up and down the coast: Sacramento, Monterey, Pismo Beach, San Diego…

“Traditionally,” Goldman says, “a New Orleans jazz band has seven people. It has what they call a front line — trumpet, trombone, and clarinet. And then a rhythm section of piano, banjo, either tuba or standup bass, and drums. Some bands don’t use drummers because the tuba and the bass [provide] enough rhythm.” That, at least, was how the groups shaped up going back to 1910, 1920. Occasionally there would be another one or two musicians, extra texture to quote George Harrison, since when it comes to music everything flows and nothing’s writ in stone.

Goldman, however, is partial to those groups who favor drums — since it’s the instrument that he himself plays.

Paul Goldman was born in San Francisco. As a youth, he says, “I was into Big Band, but a lot of traditional music because San Francisco after the war and into the ‘50s was a strong spot for what they call West Coast two-beat.” Four-beat was what they were playing in Chicago and New York.

“I started playing drums when I was in high school,” he continues, listening to records at home and practicing, but “when I graduated high school I stopped.”

In 1972, while in the airline business doing marketing and sales, Goldman moved down to our neck of the universe. His last job was director of marketing for the Redondo Beach Chamber of Commerce. “So, when I retired, I decided I wanted to start playing again.”

A few years had gone by since he’d put aside his drumsticks–about 45 altogether.

Presumably his chops were a bit rusty, and so… 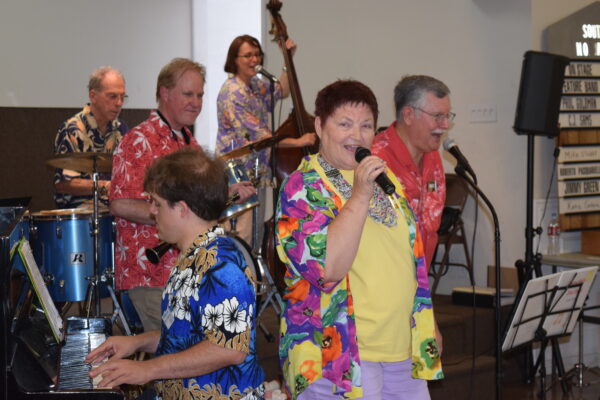 “There’re a couple of people who put together jazz camps where you can go and learn from professional musicians who play this music,” Goldman says, “and that’s all they do is play this music. [They teach] techniques and things like that. I was fortunate to go two years in a row to one in New Orleans. I played on Bourbon Street and in Preservation Hall. There’s also a camp in San Diego that I’ve gone to. So, doing all that [I was] trying to improve and become a better drummer.”

Last month, when the South Bay New Orleans Jazz Club met, the feature band (there’s one each month) was The President’s Jazz Band. It’s a group that (remember, he’s president) Goldman himself assembled.

“I wanted to put together a really good band, so I made some phone calls and got some very good musicians. If I [would get] a phone call from any of the other clubs, or if someone else had said, Hey, your band was really good; would you mind playing at our club? I would go back to these musicians and say, Hey, we have this gig at such-and-such club, can you do it? If not, it’s a one-shot thing. Bands like that are called pick-up bands.”

By way of contrast, Goldman continues, “I also play with a band called The Royale Garden Jazz Band, and we play in Anaheim (Monday evenings at El Patio), but that’s an official band that’s together all the time.”

This might give some idea as to how the South Bay New Orleans Jazz Club and other similar clubs find the various bands they entice to their meetings. In other words, there’s a kind of network, and as Goldman says:

“The word gets around that, oh, this person is playing this music and he likes to play traditional jazz, and then we would turn around and invite him to stop in. Or maybe we saw him play at a function and I say, ‘Hey, if you’re interested in playing all the time we have a venue that meets the second Sunday of every month and you’re welcome to come and play.’”

If they do, however, financial gain is not the motive.

“The musicians most of the time don’t get paid,” Goldman says, “but they’re playing for the love of the music. The feature band that we have gets paid, but the other musicians come and play because they’re interested in keeping the music going.”

When asked how he became the club’s president, Goldman laughs and replies: “I walked out of the room and they voted me in!”

Some ten years ago, when Goldman was interested in resuming his passion for drumming, a friend took him to Manhattan Beach where the South Bay New Orleans Jazz Club was meeting at the time. He started playing with them. Then, about six, seven years ago the club moved from the Knights of Columbus in Manhattan Beach to the Knights of Columbus in Redondo.

It’s a relaxed and comfortable environment, spacious, with room to dance for those so inclined.

Although it’s a non-profit organization, the club brings in enough money so that it can hire bands. It also provides scholarships for young student musicians who seem to be leaning towards traditional jazz.

“Two years ago we put a band together and went to the local high schools,” Goldman says, “and played for the music department. We got a lot of interest because the kids had never heard this type of music. We did a little history, and we played for about 45 minutes. Unfortunately, the percentage of people who were interested in following up were small.”

Even so, with the carrot stick of helping them out financially (paying for instructors and so on), the majority of high school-aged students tend to be absorbed in the music their peers are listening to — and you know as well as I do that it’s not Dixieland, traditional jazz, even if they’ve traveled up and down the Mississippi on a riverboat.

Nonetheless, the purpose of the club is to sustain and perpetuate interest and membership in a musical genre that’s often livelier than one might imagine.

“The music is not for the totally elderly,” Goldman assures us. “It’s for the young and it’s a music for all ages and it’s been around for years. If you’ve not heard it before, come down and listen to it and I think you’ll be amazed. It’ll make you tap your feet.”

The South Bay New Orleans Jazz Club meets this Sunday from 1 to 5 p.m. in the Knights of Columbus Hall, 214 Ave. I, Redondo Beach. Jam sets begin at 12:30 and the feature band (this month it’s The Coyote Hills Jazz Band with vocalist Evie Fiorani) plays at 3 p.m. Upcoming groups include The South Burgundy Jazz Band on Oct. 11, The Crown City Jazz Band on Nov. 8, and The Night Blooming Jazzmen on Dec. 13. Admission, $7 members; $9 non-members; free for musicians who come to play extra “sets.” Call (310) 397-6616.