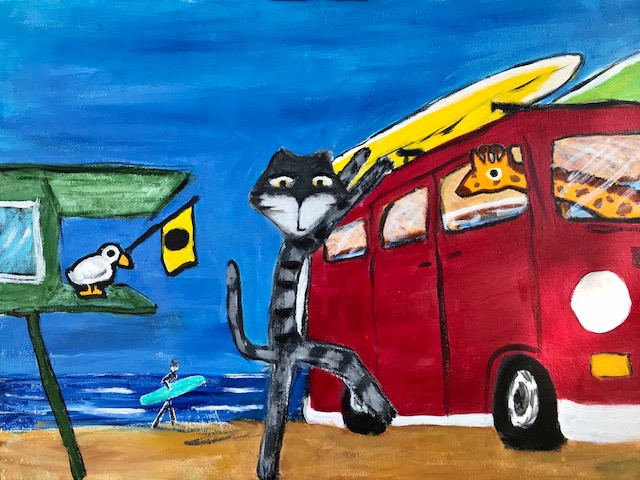 Painting by Will Shuck, with one of his favorite feline characters

Painting by Will Shuck, with one of his favorite feline characters

Artists responding to the times we’re living through

As each week passes, our resolve takes a hit or perhaps hardens, and an ongoing chronicle of our time resides in the thoughts and ideas and imagery created by our visual artists. So, with a nod to our future historians, let’s read what’s crossing the minds of a few of these people…

Nina Zak Laddon, who resides in Redondo Beach, is widely known as one of the founders and promoters of “CA 101,” perhaps the most anticipated large show occurring each year in the South Bay. Like so much else it’s on snooze, but by no means is it asleep.

Meanwhile, Nina says, “I found my way back to the studio and I have been working on several paintings. I am returning to works I left, trying to discover the way back.” 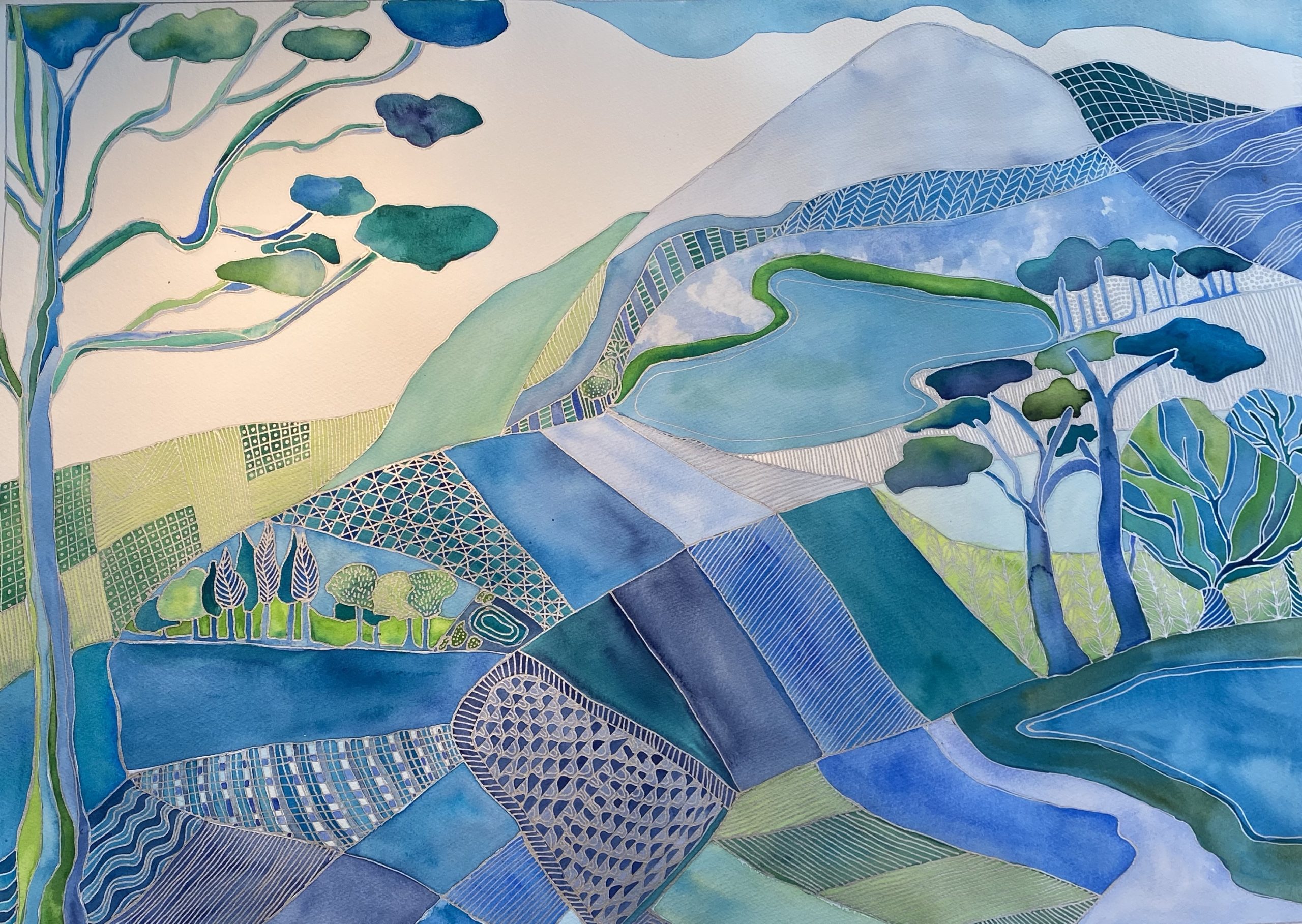 A case in point is “Bird’s Eye,” a watercolor and ink piece which, Nina explains, “was comforting as it deals with the relationship between what you see at 7500 feet in the air and what you know is on the ground. Now confined to a house of walls, the idea of flying over open landscapes is liberating as you let your mind and spirit soar despite the physical isolation.

“Flight in general, physical or emotional has the power to transform and strengthen.

“As for CA 101, we were in the process of discussing different models of the exhibition, in the attempt to keep it alive and vibrant. There were many creative ideas, from a small exhibition featuring guest artists showing a body of work to several exhibitions in small venues taking over the city. We are dependent on location availability and due to the coronavirus pandemic, there are no guarantees that can be given to secure gallery space. We hope to keep working on new and exciting variations of CA 101 with the Spring of 2021 as a goal.” 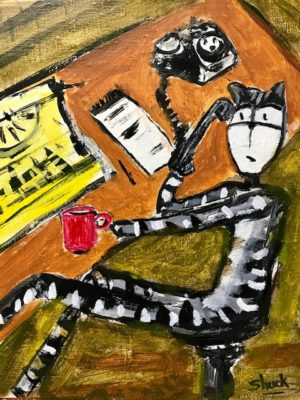 Another one by Will Shuck

Will Shuck was Easy Reader’s Manhattan Beach reporter many moons ago. On the day when James Cameron’s “Titanic” opened he and I carefully slipped out the back door of the office and went to see it. We were just kids in those days. He married a beautiful co-employee and the two of them left for greener pastures. Will then did quite well for himself and has since been creating some truly delightful art:

“I’ve accepted the harsh reality that art supplies are not deemed essential, and learned the hard way there’s no such thing as next-day canvas during a pandemic.

“And, frankly, I’m on their side. No one needs to risk their health so I can paint.

“But that doesn’t mean I can stop.

“So, I started revisiting paintings from last year. My eye seemed crueler, less tolerant now. Some paintings I had once enjoyed disappeared beneath layers of white slurry to become clean slates once more. Others, I sliced free of their frames and cut them like magazine pages to decoupage my daughter’s dresser.

“I found some paper canvas-alternatives, and they’re delightful to play on. But there’s something about cheap and plentiful paper that allows me to blithely say ‘Oh, well, I’ll start a new one,’ in a way I would not do on canvas.

“I’m happy to report two sales during the lockdown. In one instance, my buyer was silent days after his piece should have arrived. I inquired. To keep himself safe, he doesn’t open his mail until it has sat untouched for several days. Things are different for all of us.” 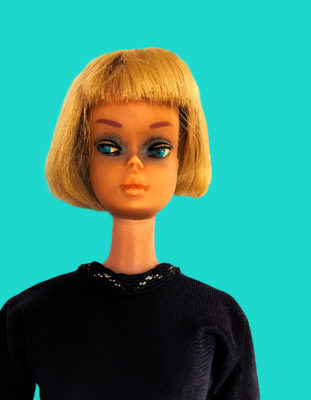 “Paranoia Begins to Set In,” by Janet Milhomme 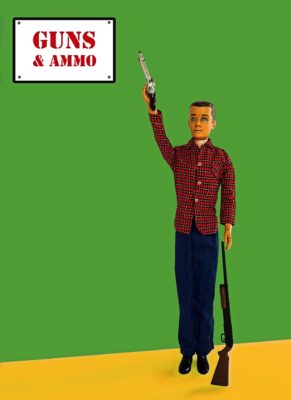 “Ken Goes to the Gun Shop,” by Janet Milhomme

Janet Milhomme is one of my favorite people, whom I had the good fortune to meet 10 years ago when Gloria Placencia and I brought together dozens of artists to participate in the “Muse” show, centered around Manhattan Beach resident Laura Orr, which was displayed at the Manhattan Beach Art Center and, later, at the Palos Verdes Art Center. Janet, who lives up the coast a little ways, is a photographer and mixed media artist, whose background is in journalism. You’d find her and her work at many galleries around Los Angeles, and I anticipate that being the case later this year or next year. But for now… 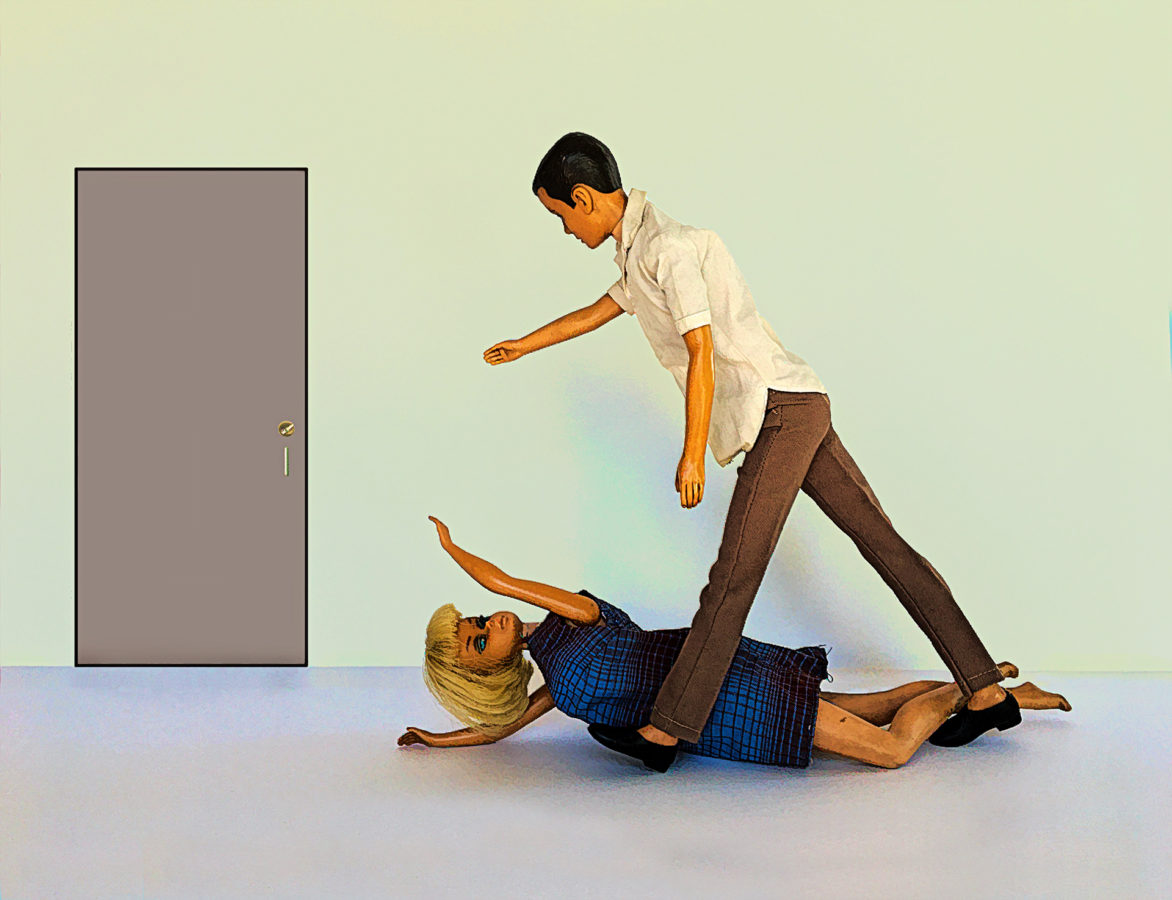 “No Escape in Seclusion,” by Janet Milhomme

“While many of my fellow photographers have been producing excellent documentary images during this time, particularly of empty streets, closed establishments and singular individuals, I have for various reasons been confined to my home environs. I was struggling to be relevant as an artist while being unable to document conditions in the same way I would have in my photojournalist past. While busy making some new Pop images one day, it occurred to me that I could incorporate current conditions into this type of work. With the help of a friend’s collectibles, I began my Pandemic Pop series, which I hope speaks to the stressful conditions under which so many of us are living right now and addresses the psychological trauma of this difficult time.”

Zeal Harris was a featured artist in “Personal Truth,” an exhibition held a couple of years ago in the El Camino College Art Gallery, curated by Susanna Meiers. Zeal grew up in Hampton, Virginia, across the bay from Norfolk where this writer spent a few years. We talked about many topics and places at that time, including the Great Dismal Swamp, where runaway slaves often sought refuge. Zeal’s painting, “Survivor,” is from her “Bantus of the Black Atlantic” series. 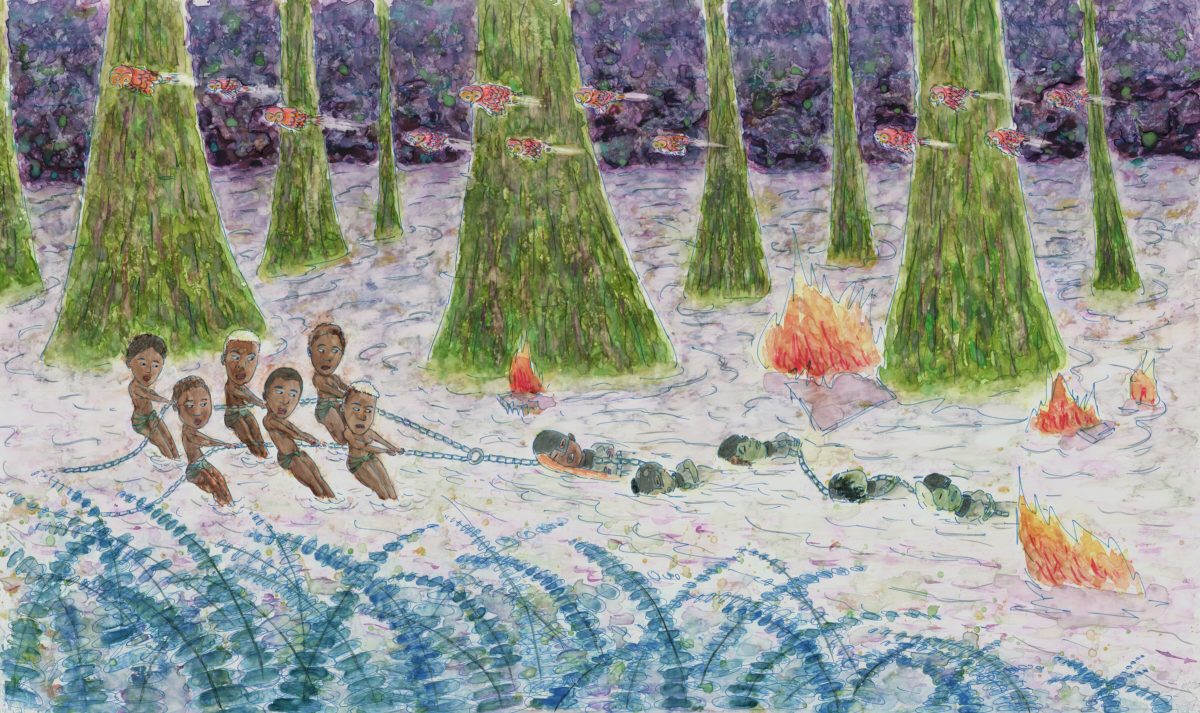 “Survivor,” by Zeal Harris, from her “Bantus of the Black Atlantic” series

“Just as I’m ready to end my monastic mode, I find myself being pummeled with COVID-19 in the real world. I’m now addicted to researching breaking news about viruses, antibodies, clinical trials, public health politics, statistics, PPE production, 5G, and oh… so many viral conspiracy theories! The fear, anger, grief, and confusion this invisible disaster leaves in its wake is overwhelming.

“When I complain too much, I remember an anecdote I read recently in Slavery’s Exiles: The Story of the American Maroons. The story goes: a short time after the Emancipation Proclamation, it was discovered that a Black couple who had ran away from slavery childless, and who had been missing for many, many years, came out of their underground shelter with fifteen children. Talk about quarantine!

“These days, I am now envisioning how old art-stories like this can connect with current events and people’s feelings in ways that are immensely relevant. That is what I am doing on lockdown.” 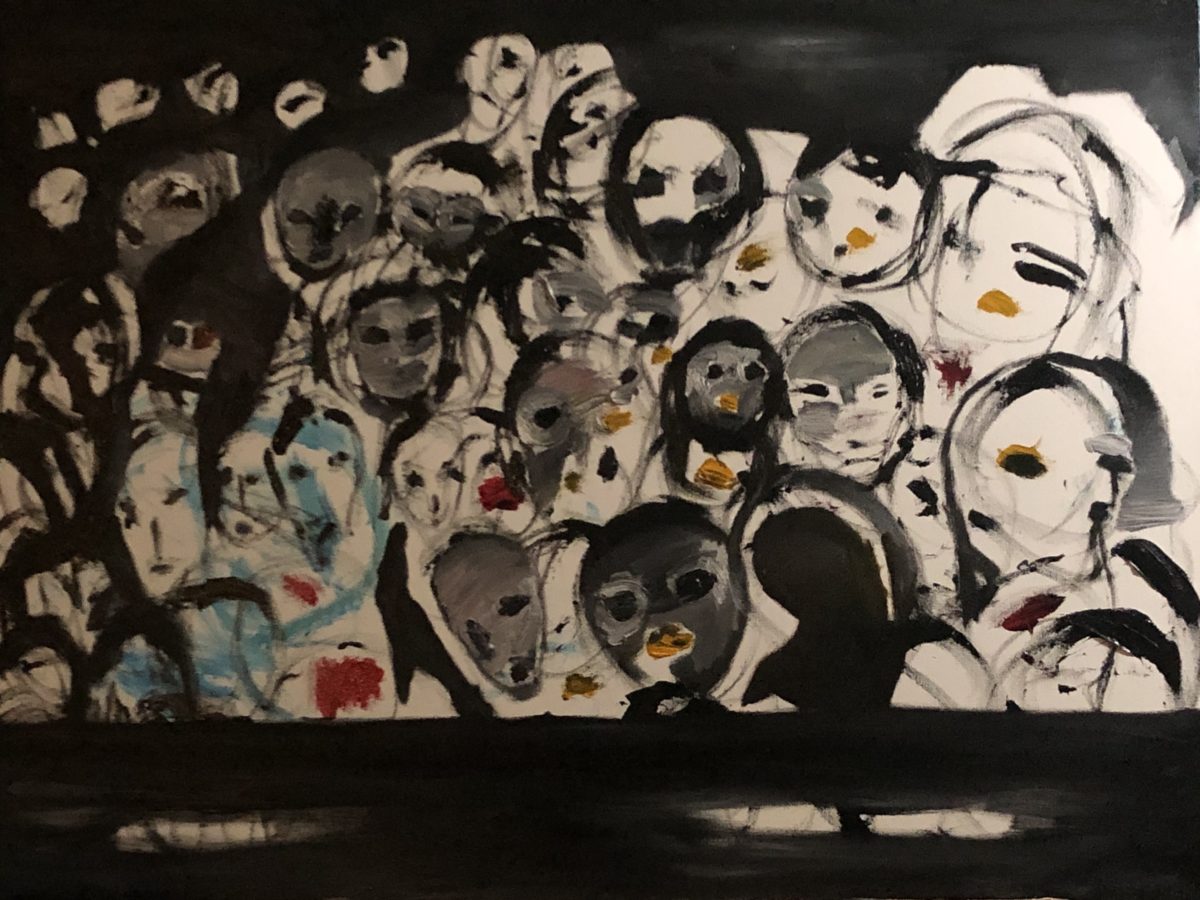 “Abruptly came the foreshortening of #much,” by Scott Trimble

Scott Trimble, a resident of Hermosa Beach, is much concerned and affected by the current health crisis, and just a few days ago he painted “Abruptly came the foreshortening of #much.” He describes it like this, in a poignant and succinct manner:

“It sums up my realization that it just feels like someone ahead of us slammed on the brakes. With our noses pressed up against the future, it now looks blurry because it is uncomfortably close.”
It’s not an upbeat note to end on, but these are downbeat times, aren’t they? That said, many of us should expect to see a wealth of introspective art in the months ahead. 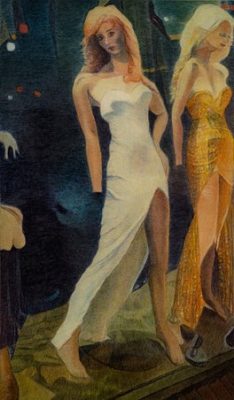 I want to add one more artist to this week’s mix, L.A.-based Randye N. Sandel, whose work I’ve admired for several years. Her palette always seems a little darker and often more mysterious. I’m glad she was willing to share some words about the series called “Dummies” that she’s currently developing. A lot of thought lies behind it, so make another cup of coffee if need be, and then sit back and read this!

“The landscape of our world today looks something like this. To the right and left of me I see people walking along, some walking their dogs, all staring down at their phones. When I am driving in my van which has an elevated cab, I am able to see into cars that come up alongside of me at stoplights. When I look over I see people staring at their phones. Last year I had a friend run over in a crosswalk. She lived but she has consistent problems with her ambulation.

“I have one of these phones too and I get text messages; I must participate or I will have no social or business life apparently. The key features of this very popular, albeit only relevant form of contemporary communication are abbreviation, verbal sloppiness, and things called emojis used in place of expressed emotions.

“I began to notice this tendency, or by now a kind of natural adapted impulse, to be overtaking all sorts of venues of self- expression. 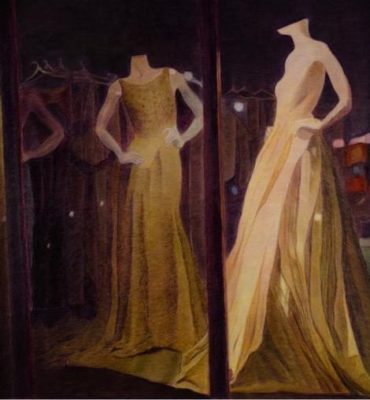 “Eye of the Beholder,” by Randye N. Sandel

“My new series “Dummies’’ explores how this totally new way of thinking and doing things has influenced window dressing. In previous decades, window dressing was a kind of art form. Department stores would devote large window spaces to manikins dressed impeccably in the latest styles always beautifully coiffed, manicured and seeming to be engaged in some mock, however meaningful interaction with other manikins. The goal was to inspire people to buy clothes which made them feel like they were sort of “Ideal”, or approaching a kind of costumed perfection. It is interesting that this was also a time when people read books and watched films that had consuming plots and fascinating outcomes. People expected dialogue to be engaging, clever, perhaps, brilliant and that plots went to a kind of conclusion that made them feel satisfied and more complete when they closed the book or left the movie theater.

“Now, little of this era can be seen in any corner of self-expression. Current dummies reveal that they can appear without wigs, or in many cases without heads. They are usually colorless, some are missing feet, or one foot or maybe a hand and still even in this disabled or perhaps mutilated form show off clothes. The only social intention they have is to seem that they are posing for selfies, or BFF ( best friends forever). I ask the question, is this not the same sloppiness and abbreviation we see in text communication? And apparently seeing such “plaster creatures” modeling the latest fashions does not discourage the intended buyer. These somber, strange statues seem to embody the way people now think of themselves. Have we become a race of somber zombies, deliberately limiting our formats of communication to be acceptable to one another? Have we reached the zenith of our postmodern nihilism or will it get worse?

“The artist, like the sociologist, has the task and responsibility to report on what he or she sees in the world and deliver a report. Well, currently this is mine.”

Thank you, Randye, well said! If you want to start your art collection, you may check out this Canvas Retailer for some pieces.