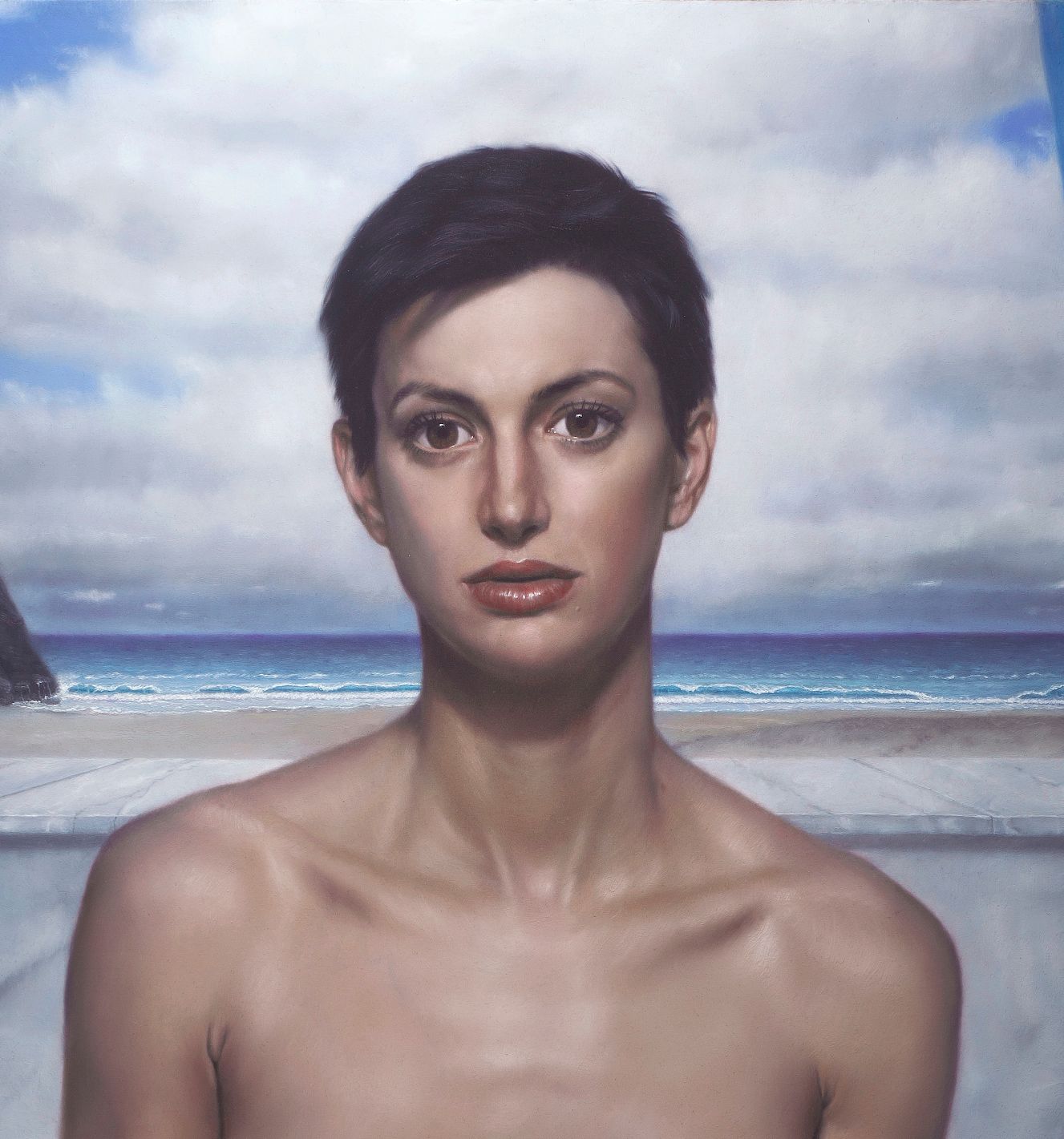 Artists always feel the heat when societal mores fluctuate, when an open-minded, liberal decade morphs into one that’s conservative and judgemental, to the point where artistic careers can be jeopardized on the basis of rumor or flimsy evidence.

I’ve known Lance Richlin for several years, and this topic was one of many we recently spoke about at length. It had never been a part of our earlier conversations because artists in general were cruising along without the self-appointed collective watchdog that a certain portion of the public has become, due in part to occasional “mob mentality” social media and the divisive politicizing of our inherent values.

How has this affected Richlin’s work? Succinctly, he once told me, “The purpose of my art is to show that there is a spiritual dimension underlying our existence.”

One might think that he would be immune from reproach since his work is directed towards a higher plane. Perhaps if he was an abstract painter there would be no objection, but as an exquisitely precise realist who often includes full or partial nudity in his work, the unenlightened viewer proceeds no further. 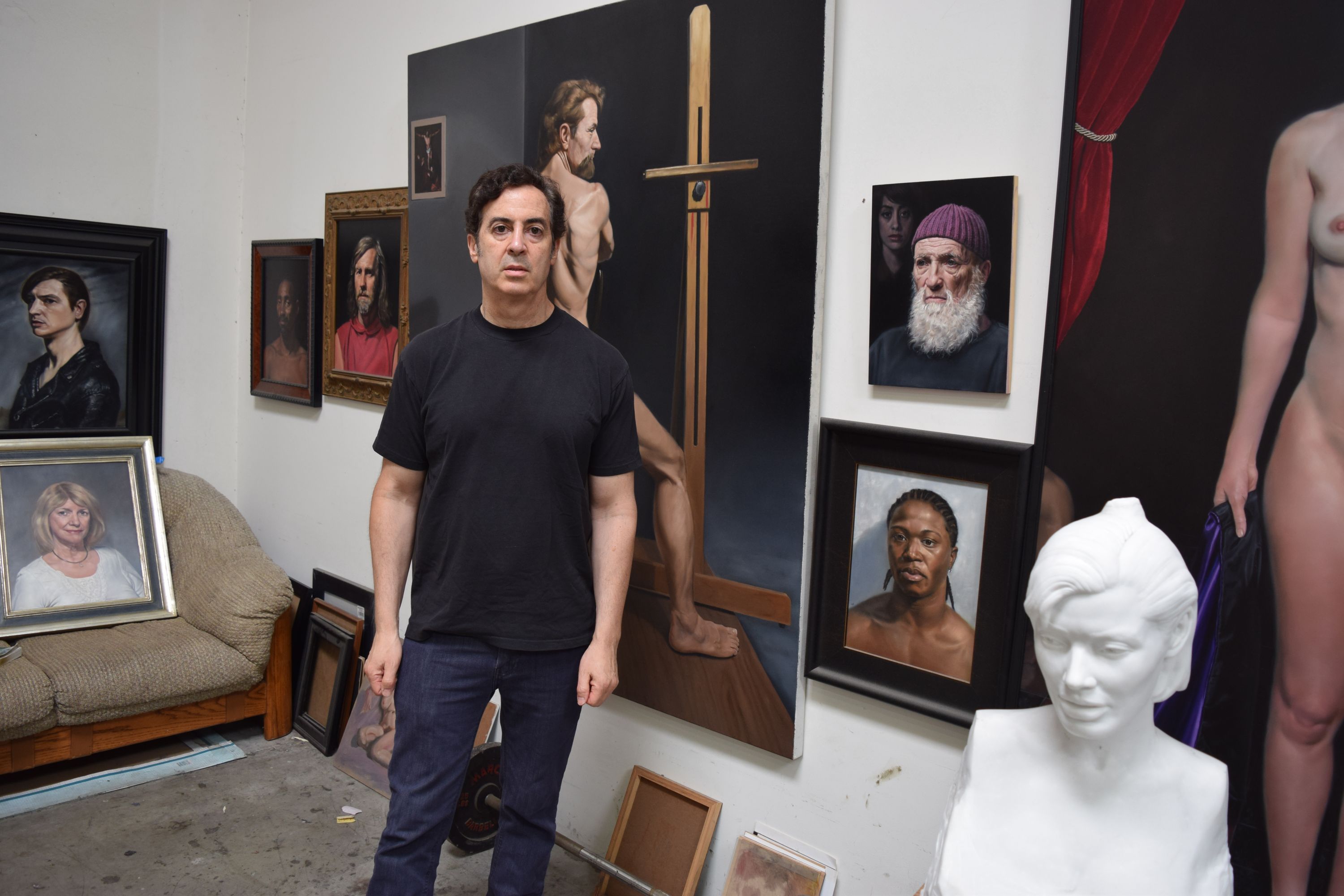 Richin doesn’t paint cheery pictures, and even his straightforward portraits glow faintly with an aura of solemnity or even a touch of the ominous. But they also feel palpable in that they most often capture the essence of the person in addition to their surface features. These paintings are not completed in an hour or two, but most often over several sittings that can span a week or longer.

Galleries that promote realistic work tend to favor commercial realism. “In general,” Richlin says, “they want very conservative realism, like pretty girls walking down the beach.” It’s not exactly Manet’s “Olympia” or Goya’s “La Maja desnuda” (The Naked Maja), but Richlin points to a large painting on the wall of his studio that depicts a relaxed, supine, nude woman.

“I don’t think that nude’s ever going to get shown, period,” he says. “It was in the San Diego Museum maybe 20 years ago, but I don’t think the climate we live in today would accept that. It’s full-frontal nudity; it’s a pretty girl. If you want to do a female nude now it has to be so tasteful that it can be hung in the dining room in front of the children when they have dinner.” 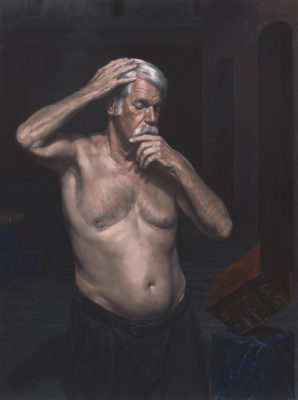 “The Follower is Given a Miracle,” by Lance Richlin

Richlin then indicates another large piece, “The Follower is Given a Miracle,” in which a middle-aged, shirtless man is puzzling over what seems an unnatural occurrence: “And this can’t be shown because people don’t want that over their dining room table. They’ll say he’s not attractive enough. Yet it’s a fine work, I think, and equal to any of the figures in the local museums.”

I think so, too. It radiates a dark, somber warmth that recalls Caravaggio and his Spanish follower, José de Ribera, the latter an artist Richlin has greatly admired and with whom he shares an obvious sensibility. But “The Follower is Given a Miracle” is a work of the first order, and not merely because it has been painted with an exactitude and technical skill few artists possess. Richlin and I move closer to the picture and he explains what we’re looking at:

“It’s about a man that sees something that can’t happen. Physical objects can’t levitate. But I think that the laws of physics can be broken and that mystical things, miracles, do happen. What I’m saying is that if you’re trustworthy to the spiritual world, the spiritual world will show you things that aren’t supposed to be able to happen.

“A lot of people will say, ‘Well, I’ve never seen a miracle. The only thing that can happen is exactly what we see here. Everything has to have a scientific explanation.’ But I think if you’re a mystic, and you’ve spent your whole life studying the mystical world, then the miracles come to you.”

An artistic life, no matter what

As a youth, “I was always encouraged to be expressive,” Richlin says. “We talked about books, we saw films, and really talked about them.” His father, a Hollywood screenwriter, won an Academy Award for “Pillow Talk” (starring Rock Hudson and Doris Day), and furthermore “invented the Pink Panther and wrote the first film.”

This isn’t to say that Richlin was pushed by his family into the art world. It actually took a college instructor to convince him that this was a field in which he could succeed. “I automatically felt like a weight had been lifted off my shoulders.”

Presumably his teacher didn’t lie and tell the budding artist that he would one day be as wealthy as Jeff Koons or Damien Hirst. “I’ll probably be working in this studio and have a very small apartment ‘till the day I die. I don’t know any other way out.”

Essentially, he confesses, “You’re trying to make a living selling very expensive things that people don’t need, and there’s no taste for it anymore. You’re a buggy whip manufacturer. But if this was 19th century Paris, these things would be flying off the walls.”

His “atelier” is in Torrance, but one can imagine Delacroix or Ingres feeling at home in it.

In the meantime, he teaches. “I have 30 students, and most of them come down from the Peninsula to study here. They’re doing very well, and they’re winning prizes.”

Teaching helps pay the bills, but it’s more than that. It isn’t just a job.

“I take pride in my teaching,” Richlin says. “But no matter how good a teacher you are, your responsibility is to your art. The teaching must be second, otherwise you’re not really fulfilling your role in society.” He pauses, before adding, “It’s actually kind of selfish, but it should be. That’s where you draw the line. You should never let anything be ahead of your art.”

He has plans for larger, more ambitious narrative paintings, but he can’t simply drop everything else in order to pursue them, as much as he would like to.

“That’s a very bad financial use of your time. But to give my life meaning I would like to express the ideas I think are important.”

The invisible made visible

What I find admirable about Lance Richlin is that he’s all the way in: When it comes to art, he doesn’t have an exit plan. But is this a curse or a blessing? Because for him art is not only a calling, it’s a mission, a “contribution to the collective philosophy of the world.”

It’s also what he feels he was put on earth for.

“What’s most important is the meaning of the work, and I’ve tried to paint it in such a way that it does honor to the things I believe in. In other words, the quality of the paintings should be commensurate with the importance of the idea. 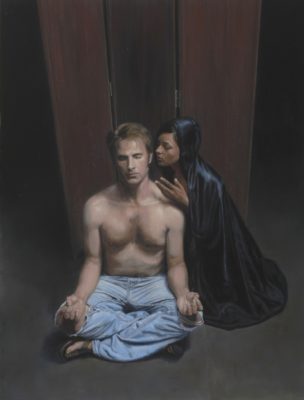 “The Follower is Given an Insight,” by Lance Richlin

One of Richlin’s latest works, “The Follower is Given an Insight,” is an apt example. The painting depicts a young man, eyes closed, sitting cross-legged on the floor and meditating, while a woman crouches at his side, just behind him but very close. The picture can be read literally, for those so inclined, but is that all?

“This is a fellow getting his idea from the Divine,” Richlin says. “Does a little spirit dressed in a black shroud whisper in people’s ears? No. You don’t see that, but that’s what I imagine is happening on another plane that we can’t see with our eyes. That’s how I’m trying to recreate a deeper level in my work, and how I’m using physical things you would see to express things you can’t see.”

Richlin has several other paintings, some of them new and some unfinished, that lead us beyond the surface and ultimately into a conversation with ourselves. One of these is an alluring, half-length portrait of a young woman, unclothed and thus to an extent vulnerable, entitled “Israel.” In the background there are faint allusions to the country itself, but nothing overt to arouse those who see Israel as a beacon of hope and democracy in the Middle East or to inflame those who see it as an albatross around the neck of the United States.

Which brings us back to the beginning, in that if a dramatist sets a loaded pistol on the table during the first act then it needs to be fired by the fourth or fifth.

Implied death threats, actually, but not to be snorted at and dismissed.

“In the 1970s, you could make art about anything, and there were no limits. Today, people love to censor art. They love it. It’s almost like, let me see this painting so I can take it down.”

Is this simple intolerance, a puritanical veneer, or something even more sinister that has been permeating society? My driver’s license shows a miner panning for gold, yet California State University, Long Beach, decided to remove its statue of Prospector Pete (critics say it “represents the genocide of indigenous people during the Gold Rush”). Christopher Columbus, Father Junipero Serra, Robert E. Lee, the “Life of Washington” mural for its depiction of the oppressed: same thing, removed or censored, despite being an integral part of American history, warts and all. We know where this can lead, don’t we?

“I’m arguing with people online, other artists,” Richlin says, “because I’m telling them, look, don’t you start picking and choosing which statues and paintings you want taken down because they’re eventually going to take all of our work down.”

Why? People always find a reason, often a perceived or personal slight, which is to say that everyone has an opinion and many are quite vocal about it.

Richlin’s art, however, does rise above the fray and the turmoil of the times by promoting and honoring beauty, and by elevating the human spirit. Words not spoken lightly. Lance Richlin has not received the full attention he deserves, but his paintings and sculptures enhance and, yes, ennoble, our corner of the world.