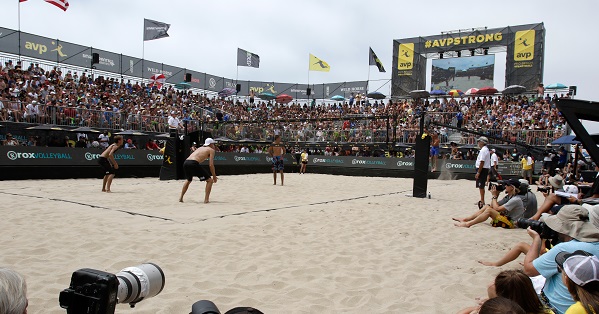 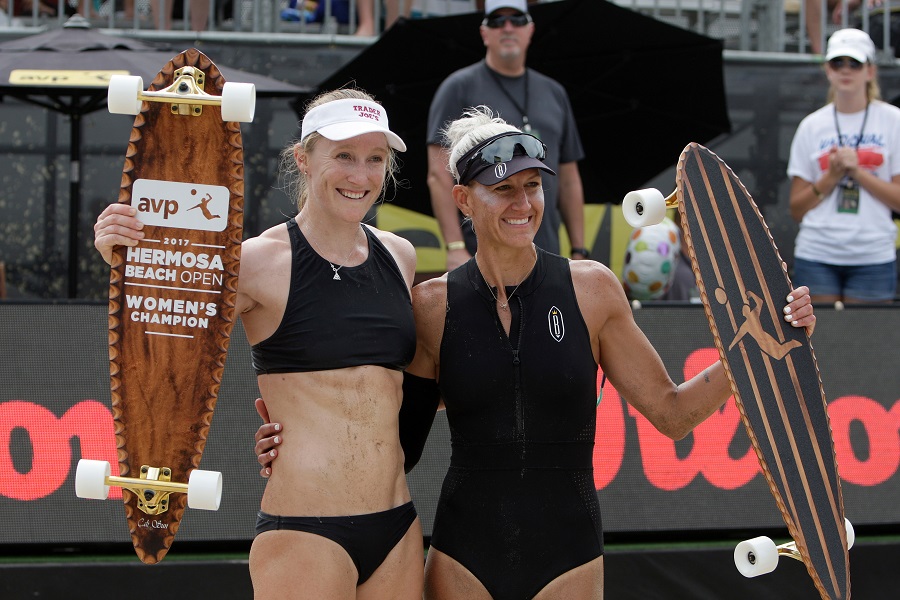 Whether it was inside the stadium or surrounding an outside court, fans converged on the sand last weekend to support their favorite players competing in the first AVP Hermosa Beach Open in seven years.

Adding to the excitement for the estimated 48,000 fans attending the event was the rule change adopted this year — on match point, points are changed from rally to old-school side-out scoring (must serve to gain a point) giving trailing teams a better chance for a comeback. 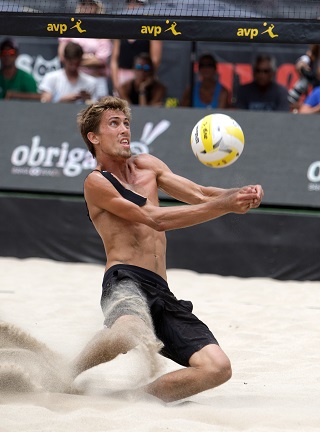 In a rematch of quarterfinal competition, Redondo Beach resident Taylor Crabb and Jake Gibb defeated local favorite Sean Rosenthal and Trenor Crabb 21-16, 17-21, 15-11 in a thrilling championship match that not only pitted brother against brother, but former teammates and Olympic partners Rosenthal and Gibb.

Rosenthal was supported by his followers, known as Rosie’s Raiders, whose raucous vocal support was aided by air horns.

Dropping into the Contender’s Bracket, the third-seeded team of Rosenthal and Crabb beat Jeremy Casebeer and John Mayer to reach the semifinals when they defeated Piotr Marciniak and Roberto Rodriguez setting up the opportunity to avenge their earlier 21-19, 21-16 loss to second-seeded Crabb and Gibb.

“Both matches were unbelievable, not just because it was against my brother but just the energy from the fans was unreal,” Taylor Crabb said. “To beat a team twice in a tournament in any sport is tough to do and we knew the second time around was going to be a lot harder. (Coach) Marcio Sicoli gave us a great game plan for both games which helped a lot.”

The win marked the 29th AVP championship for the 41-year-old Gibb but first in Hermosa Beach. For Taylor Crabb, 25, it was his second AVP title after the duo claimed the New York Open title six weeks ago.

The victory celebration was short-lived with top players heading to Austria to compete in the FIVB World Championships July 28 – Aug. 6.

“We will definitely use this momentum for Worlds,” Crabb added. “I thought we played very consistent through the whole weekend which is a great feeling going into the biggest tournament in the world. We will look at everything we did right and wrong from this weekend as we prepare for our first game on Saturday.”

“In the last few years, I’ve been begging the AVP to return to Hermosa Beach, so it was so exciting to play at home in front of family, friends and former teammates,” Day said. “It’s difficult to win and repeat but we’re looking forward to the Manhattan Beach Open and earning a plaque on the pier. We know everyone will be gunning for us, including players such as April Ross, Lauren Fendrick and Brooke Sweat who were competing internationally last weekend.” 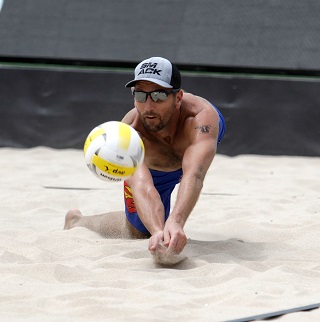 The win was Hochevar’s fourth AVP Tour title and second this season with Day. They won the season-opening tournament at Huntington Beach.

Seeded sixth, Carico and Klineman were playing in only their second tournament together and finished in 5th place after battling out of the Contender’s bracket with a 21-15, 21-18 win over the other 5th-place team of Redondo Beach residents Janelle Allen and Jenny Kropp.

The AVP is comprised of four divisions: AVP Academy, AVPNext, the AVP Pro Tour and its non-profit 501(c)3 organization, AVPFirst, which held its National Championships on the outer courts in Hermosa Beach last weekend.

The South Bay produced many players finishing in the top three of AVPFirst competition.