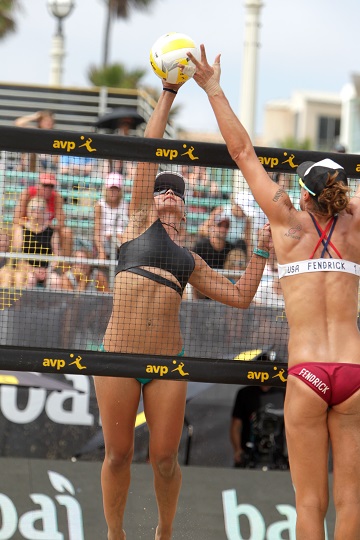 History was made on the AVP beach volleyball circuit on Sunday when Manhattan Beach’s Jace Pardon and her partner, Karissa Cook, captured their first championship.

On the men’s side Taylor Crabb, of Redondo Beach, and partner Jake Gibb took the title having to win six straight matches after dropping their first match to Paul Lotman and Gabriel Ospina.

Fourth-seeded Pardon and Cook took on No. 14 Kimberly Hildreth and Sarah Schermerhorn, who had to compete in the qualifying draw, winning seven consecutive matches to reach the finals.

Pardon/Cook easily won the first set 21-11 then, after holding a 20-11 lead in the second game, Hildreth/Schermerhorn fought back, siding out three times during the score freeze before succumbing by the same 21-11 score.

“It was a really tough tournament. We came out with everything we had,” Pardon said. “I’m on cloud nine; I used to volunteer at these events as a little kid, and being from Manhattan Beach it’s everything to be an AVP champ. We worked so hard and we’re so excited, plus we get to go to Hawaii.”

Another player from the South Bay reached the semifinals when Falyn Fonoimoana, of Hermosa Beach, teamed with Anaheim’s Nicolette Martin. The 10th-seeded duo lost to Hildreth/Schermerhorn 21-18, 21-19.

“Coming into today (Sunday), Nicolette and I had the mindset that we have nothing to lose and everything to gain,” Fonoimoana said. “The Austin crowd is amazing and I truly appreciate their spirited cheers whether they were cheering for us or against us.”

In the men’s final, the top-seeded team of Taylor Crabb and Jake Gibb fought back from an opening match loss to defeat No. 4 Jeremy Casebeer and Chaim Schalk.

Holding a 13-9 lead, a dig by Crabb led to a kill and their opponents could not get any closer than four points in a 21-16 victory.

In the second set, Casebeer/Schalk fended off six match points but fell to the champions 21-16.

The win marked the second time since 2001 that any team lost its first match in an AVP tournament and came back to earn the championship.

“We trained so we could push through this. I could go another two matches, to be honest with you, but I’m tired at the same time,” Crabb said.

“I knew when we lost our [first round] match that we were coming through Nick [Lucena] and Phil [Dalhausser]’s side,” added Gibb, “and we had to grind through some other great teams too.”