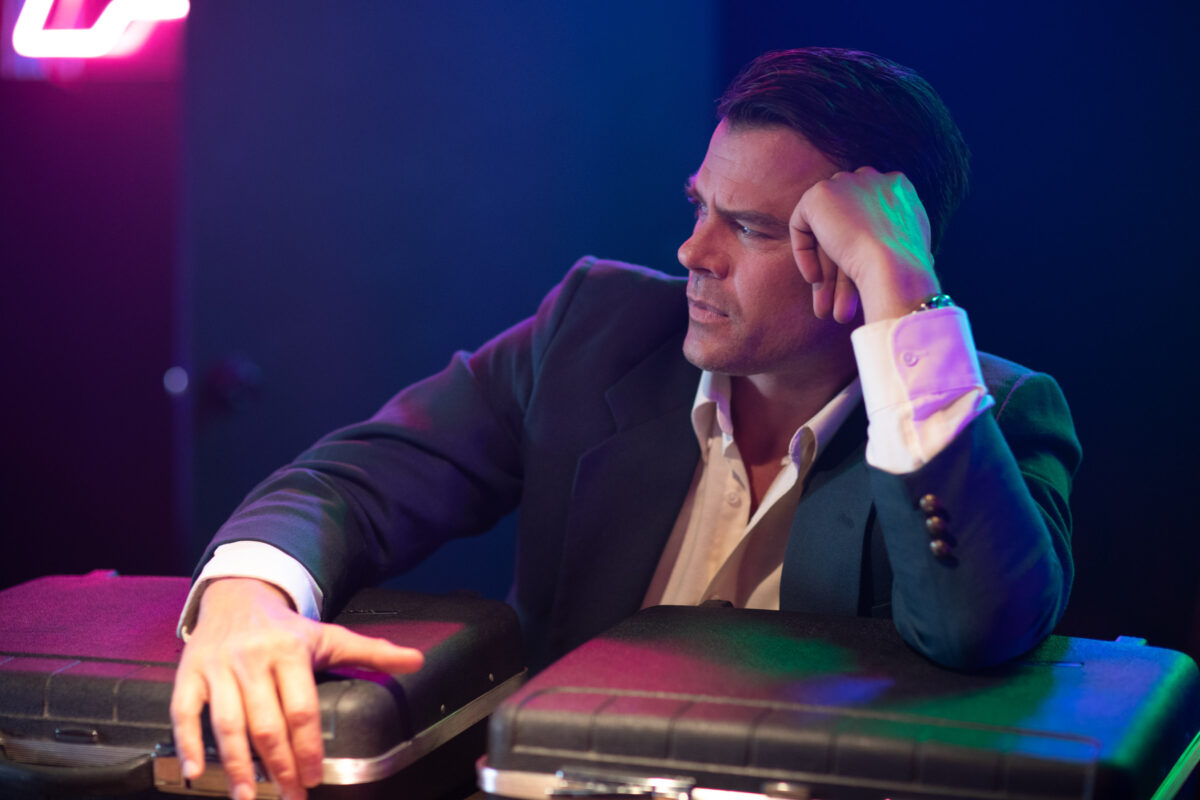 The true story of career criminal Gilbert Galvan belongs in “Ripley’s Believe It or Not.” It definitely comes under the category of “truth is stranger than fiction.”

Director Allan Ungar starts us out at the end. In stunning opening credits, as our anti-hero unloads his gun, stubs out his ever present cigarette, and prepares his disguise, he states: “No one’s born bad. Like anything, it takes practice.” To the tune of “Raise a little Hell,” he strides purposefully into a bank, satchel in hand. He’s a bank robber and he’s robbing a bank, something he does for a living. But he needs just that last little adrenaline rush, so after leaving his disguise behind, he marches over to a pay phone and calls in several voice-disguised 911 calls that will further confuse the police. It’s 1988 in London, Ontario and there won’t be many more. Detective Snydes has been on his trail for several years and is closing in. Galvan’s arrogance is soon to be his undoing.

But before that can happen, we are drawn back to the beginning of the saga in Detroit, Michigan where Galvan has been sentenced to a minimum security prison for check fraud. Prison doesn’t agree with him, not even a Club Fed, and he runs off. Yes, he just runs off, climbing chain link fences and hitching a ride to Canada, a very short hop and jump from Detroit. 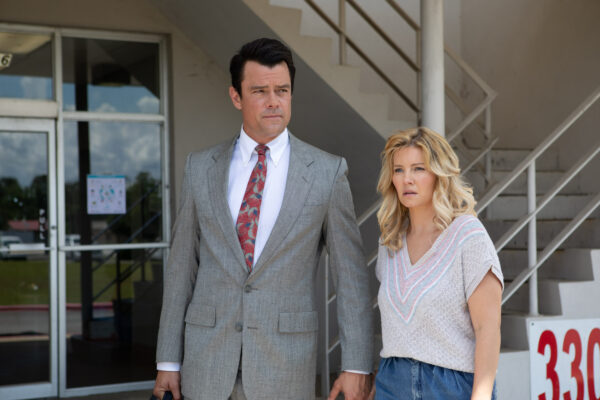 Josh Duhamel as Galvan aka Whitman and Elisha Cuthbert as Andrea in “Bandit.” Photo courtesy of Quiver Distribution and RedBox Entertainment.

There’s a recession and finding work is nigh unto impossible, made even more difficult with a lack of ID (he’s a marginally wanted escapee on the other side of the border). Always resourceful, he buys an ID off a homeless guy and presto change-o, Gilbert Galvan is now Robert Whiteman. Attempting to go straight by selling popsicles out of a bicycle push cart doesn’t go as planned when he’s almost immediately laid off. What does go right is his meet cute of his future wife, Andrea, who manages the homeless shelter where he has been staying.

Now with a girlfriend, no job, and no prospects, Whiteman discovers that the Feds are actually still looking for a two-bit crook like him. Temporarily abandoning his girlfriend, he takes a bus as far away as possible — Vancouver. Looking for a legit job, he finds that he is, once again, unemployable for anything but the most menial work. Learning that Andrea is pregnant, he needs a quick fix of cash. He is nothing if not ingenious, devising a way to rob a bank. He dons a disguise and learns about the bank security from the manager himself. Armed with that information, and a new disguise, he robs the bank. Although he hilariously neglects to bring a bag to stash his cash, he discovers his calling. This is something he’s really good at.

He returns home to Andrea with grandiose new plans. Tommy, the local crime kingpin, is the guy to help him put them into place and he strikes a deal. He convinces Tommy to front him the money for the expenses that he incurs when he flies to distant cities. For that down payment, Whiteman will not only pay him back a hefty sum but will also cut him in on future deals.

The Flying Bandit has not gone unnoticed by the police, particularly Detectives Snydes and Hoffman, an unlikely duo if ever there was one. But the police are underfunded and Snydes and Hoffman can’t muster the resources to track some of the crooks they already suspect. Foremost among them is Tommy, long on Snydes’ radar but so far untouchable. When the robbery rate starts to increase, they begin to devise ways to follow the statistics when given most of the resources they need. It takes quite a while to figure out that the bank robberies across the country might be by one person but eventually they do. Discovering who that person is, is something else.

The cat and mouse game that the cops and robbers play is very entertaining. Whiteman never uses a loaded gun, he’s very polite, and disappears into thin air. But most criminals slip up along the way and our anti-hero, no matter how skilled, will be no different. 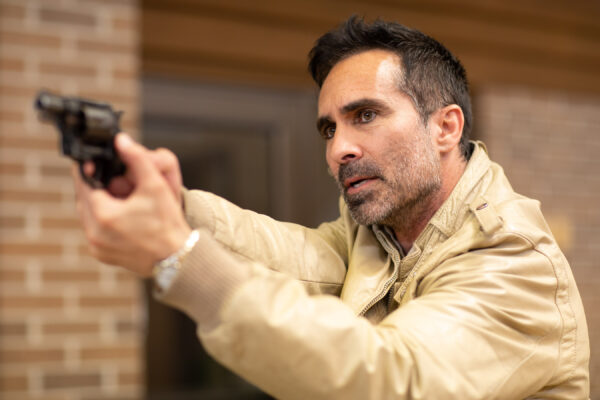 Director Allan Ungar and writer Kraig Wenman, who based his screenplay on the book The Flying Bandit by Ed Arnold and Robert Knuckle keep the pace moving throughout most of the film. Lagging a bit in the middle, they, nevertheless, tell a fascinating story about interesting characters. They are graced with an excellent cast led by Josh Duhamel as Galvan/Whiteman. He’s charming and has the timing to carry off the snappy dialogue. Breaking the fourth wall, Duhamel’s character often narrates the action, turning to the audience. Although generally effective, it also has a tendency to slow the pace unnecessarily, veering into “and then I did this” territory.

Mel Gibson is effective as Tommy, although maybe not as threatening as a strip club owner/money launderer/enforcer should have been. The movie really only had room for one charming crook, leaving the character of Tommy not entirely well-defined. Elisha Cuthbert as Andrea is very believable as “Robert’s” anchor. Nestor Carbonell as Detective Snydes was a standout. His anger and drive are barely below surface and he’s an excellent foil to Tommy and Whiteman, as well as his straight man partner Hoffman.

Some judicious cutting would have helped the pacing. The beginning and the end (which, in a way, are the same) work much better than the middle that starts to become more of “and this happened and then this happened.” The robberies began to melt into one another, slowing the overall action.

All in all, however, it’s fun to spend some time with “Bandit.” The chron at the end is a bit disingenuous and his prior history was much worse than portrayed. He didn’t go up for check fraud, he was serving a long term for robbery. After Galvan served his time for the Canadian robberies, reputed to have been 59, he was extradited to the U.S. for crimes he committed in Wisconsin. Released in the U.S., he went on to rob banks there and was imprisoned again. Unfortunately, the charming Galvin of the film was just another stupid criminal, having been arrested most recently for trying to steal booze from a liquor store. Driving a truck, as the chron says, seems to be as fanciful as the backstory painted by the filmmakers. Still, it makes for a good story.

Opening September 23 at the Laemmle Monica, Laemmle Royal, Laemmle Noho 7, the Laemmle Glendale, and on VOD and SVOD platforms.