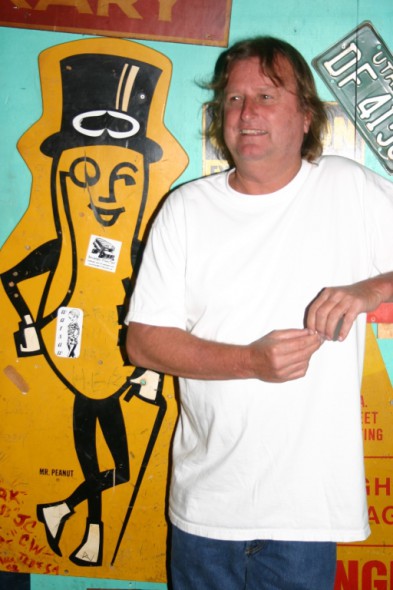 "Tootie" at his magical Pitcher House.

Farewell Dear Friend: Last week we lost a true South Bay legend. Gary “Tootie” Cullen passed away after a long battle with cancer. He managed Toes Tavern back in the day and owned and operated the Pitcher House at Pacific Coast Highway and Second Street in Hermosa Beach for over 20 years, most of them without a full liquor license, as he was prone to rant and rave about whenever the opportunity arose.

Bucket List: Back in May of this year, Tootie was informed by his doctors that they had reached the end of treatment and it was now time to consider a hospice. While processing that information and doing research on where to go next, Tootie stayed with his brother Neal in Thousand Oaks. He had some good days and some bad days until one of his friends, (Glen, local Hermosan), told him he should take a road trip and Glen was offering to spring for the RV. Well, he didn’t have to ask Tootie twice. He got right on the phone to his brother Mark and said, “Mark, Glen is springing for an RV, I wanna take a road trip and I wanna see Mount Rushmore.”

Days later they set off on a 15 day expedition — the three brothers and a few other family members, six in total. They did indeed make it to Rushmore, Yellowstone and the Grand Canyon, and put over 4,000 miles on that RV. Mark tells me Tootie really enjoyed himself. When they got back on May 27, Tootie began planning his 60th birthday, (June 13). Again they rented an RV but this time they set up for a few days at Dockweiller Beach, El Seg. Throughout the day and night of the 13th, Mark said about 150 people came by to wish him a happy birthday but it was more than that; they were saying their goodbyes. Only Tootie would plan and attend his own wake, right? Two weeks later on June 29, we lost him. He was a special man and he will be missed. I take comfort in the fact that he got some enjoyment out of his last few weeks and I betcha he’s got a tap flowing somewhere…

Arrangements: Tootie’s funeral will be held tomorrow, Friday, July 8 at the Holy Cross Cemetery on West Slausson, Culver City. The chapel/cemetery agreed to hold a 1 p.m. service, (normally services are at 10 a.m.) because they were told that these are all bar people, you’re not getting them anywhere before noon. Following the formal services will be a gathering of family and friends to celebrate his life at the Elk’s Lodge, South Catalina Ave, RB, 4-9 p.m. Food will be provided, cash bar and there will be some audio equipment set up for people to stand up and say a few words. For More info call the Elks Lodge at 310.372.8488…

Memories: Several years ago I awarded Tootie my Dubious Deb L Achievement “Crybaby of the Year” Award. He loved it. Back in the late 90s when I used to do the bar/resto advertising sales at Easy Reader, I would call him to see if he wanted to run an ad and the convo always seemed to go something like this: “Oh Deb Deb Deb, you know the city is killing me, now they’re saying I have to upgrade my air conditioning system before they will even consider giving me my full liquor license. If it’s not one thing it’s another with these guys. How can they not give me a full liquor license? Did you know that on the books my bar is the only establishment that is actually listed as a “bar?” Did you know that? Did you? Well that’s right! Even the Hermosa Saloon across the street, which doesn’t have a goddam kitchen is listed as a restaurant. I’m losing money left and right and they are making it more and more difficult for me. I can’t afford to run an ad right now but call me next week would ya? Love ya girl!” In later years you could tell his body was losing the fight but his spirits always seemed high, he didn’t want pity. He was a good man, a courageous man and a friend to us all…

Speaking of the Saloon: Long time renegade owner, (those of you who know him, know what I mean), DQ, a man who didn’t like to follow the rules, has sold his beloved Hermosa Saloon to Kenny Garmoe who assumed leadership last Friday, July 1. Kenny told me the fourth of July week-end was awesome, though they did close on the actual holiday to give the staff time off with friends and family. The employees are staying on board, (except for DQ), and there are no planned changes other than a computerized cash register. The current one is one of those cool, oldtime push button ones that looks like an overgrown typewriter, which was always part of the charm for me.