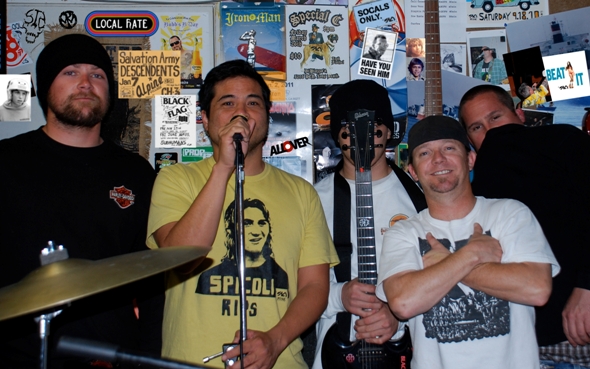 From stardust to skin flakes, the nature of all things seems bound to cyclical progression. Caught up in that processional dance is blood; our blood, recycled throughout the Millennia, oxygenated with history and the spawning bloodlines. We develop peculiar ideas about “blood being thicker than mud,” or the blood of our ancient ancestors pumping through our veins today… Blood also adopts culture: Greek artistry, Norse ferocity, Cajun mystery, Irish – well… Even here in the South Bay, there’re some fellas talking about what they call “beach blood.” And whether you like it or not, Punk music is swimming in the plasma of our beach culture.

“It’s pretty straightforward, it just means we are from the beach; thus, we have beach blood,” explains Daniel Inez of the local Punk band Beach Blood. “Beach blood is something you were born with. Attitudes, values, and style have everything to do with the culture you were born into; and people from the beach are from a different mold. Beach Blood, I guess, is a little boastful in this aspect; because while people from all over the country come to our hometowns to live and buy homes, because it’s the spot to be, well, we were born here. They came here essentially to live a life we’ve always known. The fact of the matter is, even buying a house on the strand won’t get you beach blood.”

I know what you might be thinking… and no, they’re not a bunch of beached-out ruffians with a negative attitude toward “outsiders.” They just love where they come from and are proud of it.

“We just wanna celebrate beach culture through music, by playing live for people who can appreciate the idea of a southern California Punk Rock cover band,” assures Inez. “We just play cover songs by bands from Santa Barbara to San Diego.”

In some circles, they could be regarded as a type of local Punk supergroup, being that the outfit is largely a collaboration of members from other bands past and present. Oliver also plays in Allover, and used to be in Misguided Youth and DSFA. Engstrand and Cairns are both currently in Local Hate, while Cairns used to be in the STD’s. Jones moonlights with Special C, and Inez used to be in Product. Talk about mixing blood

“All of our members have their own original bands and are the songwriters for those bands,” says Inez, “so we have no problem with coming together to play killer songs of the past. Some of the songs may sound like originals to some people, because we cover so many different bands – and very few people can recognize the more obscure stuff.”

He says, “After watching Smart Patrol play Devo songs at the Iron Man the prior year, I figured, ‘Why not provide the perfect soundtrack for the event and play songs that are more representative of the South Bay?’ So I contacted friends that I knew would be down with the project and Beach Blood was born… and approached Harold and Burgie about playing the Iron Man and it was on. We figured: if people can’t see these bands play on the beach, we can be the next best thing. It just made sense. It went over killer because all the locals knew the songs and we planned it so that no matter how far we were into the set, when Burgie told us we had one more song left we would play ‘Bro Hymn’ [by Pennywise]. Bro Hymm on the beach in Hermosa during the Iron Man… I think we may have started a tradition within a tradition.”

The band looks toward the sunset with plans to expand their coverage of So Cal tunes, eventually incorporating songs from the like of Red Hot Chili Peppers and The Beach Boys into their Punk platform. They also say that they’re readily available to hire for any type of show or party.

“I’d like to believe that it’s hard to dislike us,” says Inez. “We haven’t had any tomatoes thrown at us, yet.”

Beach Blood is playing at Suzy’s Bar and Grill in Hermosa Beach this Saturday, Mar. 3 at 9 P.M. with Allover, and Sukha Drones (former members of Prop 13, Product, and Out of Order). Inez says, “Check your attitude at the door. Sal and Dk at Suzy’s have been super cool to let us play and we’d like to be invited back!”