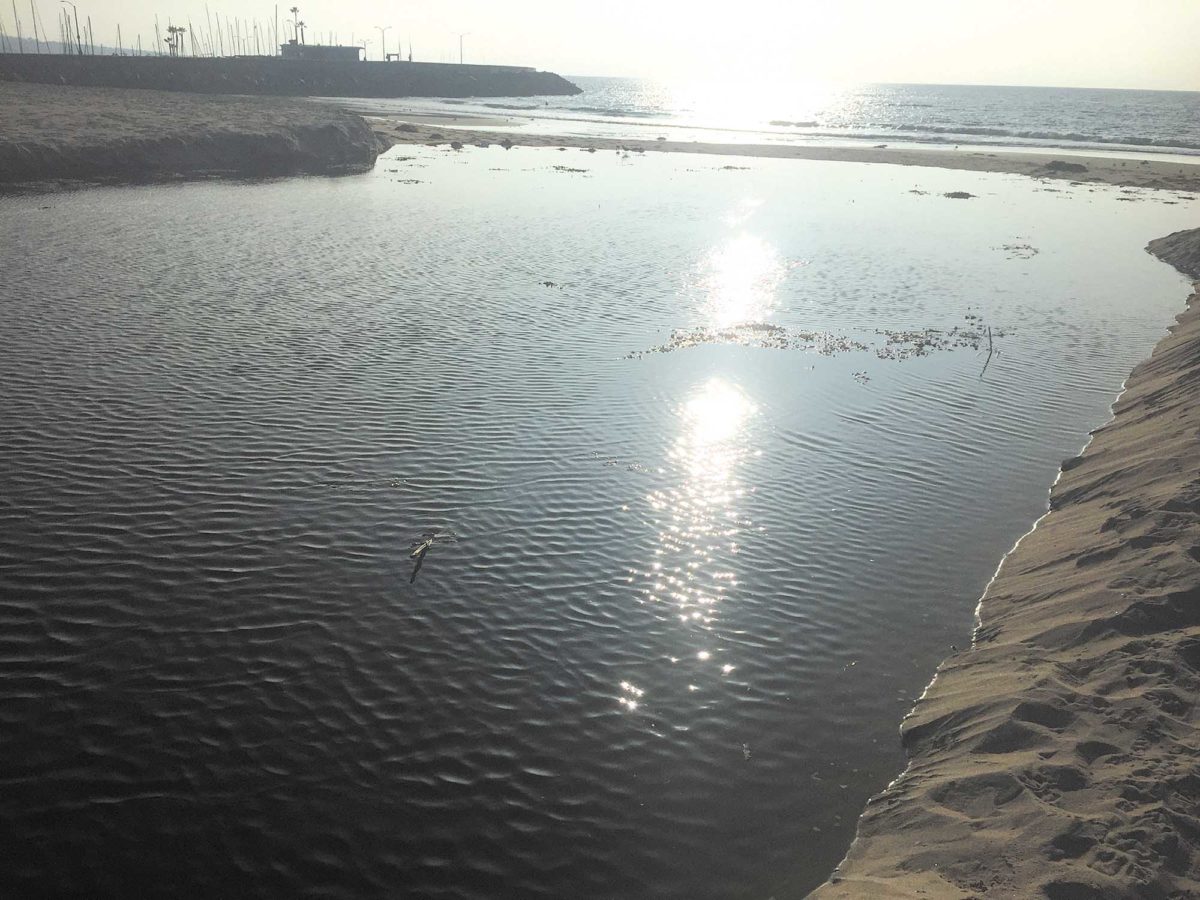 Runoff from the Herondo Street outfall flows over the sand and into the ocean after a storm in 2017. Photo by Ryan McDonald

A new report from Heal the Bay has found that the Beach Cities are dramatically behind in their efforts to address stormwater, which flows untreated from storm drains to foul beaches and oceans.

The report, released Tuesday, studied efforts to address stormwater throughout Los Angeles County, and found that the region as a whole was well off pace to meet upcoming pollution reduction goals mandated in state and federal environmental regulations. The report places much of the blame on the failure of local governments to build projects to address the flow of stormwater.

“Project implementation has been very slow, and cannot continue at this pace if water quality is to improve in our lifetimes,” the report found.

If stormwater project development continues at current rates, the report found, the Beach Cities would meet its 2021 stormwater goals in the year 2116. Only one of the county’s watershed groups was on pace to meet its goals, and viewing progress for other regions required an even longer gaze into the future. The Palos Verdes Peninsula is on pace to meet a 2032 stormwater reduction goal by 2638.

The report follows a vote by the Hermosa Beach City Council earlier this year to reject a stormwater infiltration project called for on the Greenbelt near the border with Redondo Beach. The project, which called for construction of an underground gallery to collect stormwater flowing to the Herondo Street outfall and filter it into the soil, would have significantly increased the progress of the Beach Cities toward meeting stormwater goals, but was scuttled amid intense opposition from nearby residents.

Hermosa is now in the midst of negotiations with Redondo and the other Beach Cities to find alternative locations for projects to address stormwater; the most recent public statement on the matter came over the summer, when Redondo officials hinted at litigation over Hermosa’s decision to reject the Greenbelt project.

The federal Clean Water Act makes cities responsible for addressing pollution that flows to the ocean and other large bodies of water. Under the law, “pollution” encompasses not just waste from industrial production, but more widely distributed “non-point” sources, including the detritus left on roadways and other impermeable surfaces that can eventually make its way to the ocean.

Although local governments have been responsible for addressing stormwater for decades, Southern California has made little progress recently, and by some measures has allowed the problem to get worse. A 2018 analysis from environmental scientists at UC Santa Barbara found that, of 80 measures of water quality collected throughout Los Angeles County between 2002 and 2015, 52 of these measures show no significant improvement, while 23 included “statistically significant declines in water quality,” including the greater presence of various heavy metals. At least some of the five measures that showed improvements may have been due to decisions outside the control of the local governments, the report concluded, including state bans on certain pesticides.

Part of the problem has been that addressing stormwater is extraordinarily expensive. City fees that collect money to address stormwater, which under Prop. 218 require a vote by two-thirds of residents to adjust, have long failed to keep up with costs. In 2018, for example, Manhattan Beach households paid a $19 stormwater fee, but an analysis from the city’s finance department indicated the assessment needed to be 10 times higher to recover the city’s costs. Some relief may come from Measure W, an assessment based on a property’s impermeable surface area that Los Angeles County voters approved in 2018, which is expected to provide hundreds of millions of dollars annually to address stormwater.

Although ocean water quality can be imperiled at any time of year, the problem is especially severe following rainstorms, when the volume of water flowing through the region’s patchwork of storm drains — some of which are owned by Los Angeles County, and some by the cities themselves — increases by orders of magnitude.

Heal the Bay, a long-established environmental advocacy group, regularly issues beaches in the region a letter grade to assess water quality, and while the Beach Cities generally have good water quality during dry weather, ratings drop in the three days following a “rain event.” The Beach Cities have implemented various projects to address stormwater in recent years, including a trio of large basins in Torrance and “Green Street” projects in Hermosa. But between 2013 and 2017, Tuesday’s report found, Torrance, Redondo, Hermosa and Manhattan Beach “have consistently received a grade of F during wet weather.”

Threatened with large fines over Clean Water Act violations, the Beach Cities agreed to form an Enhanced Watershed Management Plan (EWMP) in December 2013. The agreement stayed enforcement of the penalties in return for the cities’ promise to develop a plan to address stormwater, a plan that came to include the Greenbelt infiltration project. That plan gave the area until the summer of 2021 to meet a series of interim pollution reduction goals, which Hermosa city staff have said that the region is now highly unlikely to meet. Along with negotiations over alternatives to the Greenbelt project, the Beach Cities will also have to negotiate with state and regional water officials to obtain an extension.

The Beach Cities were not singled out in the report, but the failure of it and other watersheds to make measurable progress moved Heal the Bay to call for overhauling the way local governments approach stormwater planning.