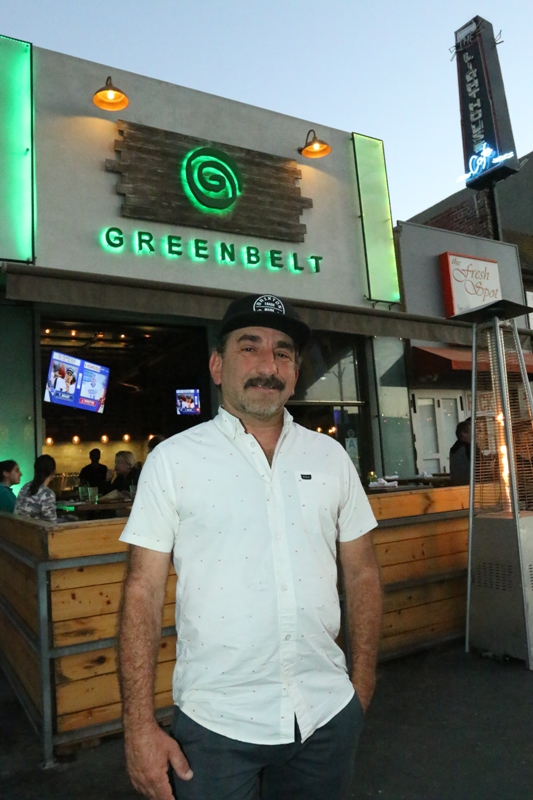 Hermosa Beach’s rising incomes over the past 20 years, combined with advances in social media, changing dining habits, city regulations and risk-taking by well-funded restaurateurs have had a profound impact on the city’s dining scene.

Pier Plaza came to life in August 1997 when Pier Avenue was closed to automobiles from Hermosa Avenue to The Strand in what one city official characterized as a “social experiment.” It propelled city sales tax revenues to an all-time high in 2000. Revenues for businesses that collect sales tax were just shy of $300 million, with about 40 percent of this coming from eating and drinking establishments.

Michael Santomieri, owner of Greenbelt on Pier Plaza, was the manager of the popular Sangria restaurant during this period. He recalled the plaza being “packed with people, shoulder-to-shoulder. Justin Timberlake, Britney Spears and Scottie Pippen all showed up and sometimes the entire Lakers team would hit up the plaza after a game,” Santomieri said.

With few exceptions, the downtown dining scene was more about bars and entertainment than about food.

Unfortunately, not all the results were positive. With crowds come problems, among them public urination and fighting. Residents living near the plaza pressed the City Council to address the problems through stricter regulations.

The city regulates businesses with Conditional Use Permits (CUPs). CUPs are location-specific and can be used to curtail hours of operation, limit entertainment, and increase enforcement of the so-called “50-50” rule. This latter rule requires an equal balance between alcohol sales and food sales, and may have been a factor in some bars closings.

Greg Newman, co-owner of Tower 12, Palmilla and Sharkeez on Pier Plaza, said, “From about 1997 to 2004, the crowds were upwardly mobile locals and tourists.” This shifted when the rules changed. “It became less fun for people who lived here to go out here.” Business started falling off, which hit city sales tax revenues. These revenues have stayed below the peak of 2000 for 16 consecutive years.

Surprisingly, as the financial crisis started pummeling the country in 2007, a significant number of brave restaurateurs tested the Hermosa market. Zane’s, Barnacle’s, Silvio’s Brazilian BBQ, Gum Tree, Chelsea, Rok Sushi, and Waterman’s would all hit the scene and make it. However, at least a dozen others would open and close over the next few years, including Hibachi, Jitter’s, and Brix.

Tyler Gugliotta, the former chef of Brix and now the executive chef of Baran’s 2239, said of that period, “The food scene in Hermosa was pretty abysmal. Most places offered only tacos, burgers and bar food.”

The re-opening of Upper Pier Plaza in October 2010, after an impressive redevelopment, coincided with the beginning of a recovery in home prices and triggered a renaissance in the dining scene. Gugliotta singled out a handful of restaurants that continue to shake things up, including Abigaile, Greenbelt, Tower 12, Hook & Plow, and his own Baran’s 2239.

The Upper Pier project quite possibly has had more of an impact on downtown Hermosa than any other development. With the opening of the 200 Pier Avenue retail and office complex and the completion of the redevelopment project, more than 50 new businesses would gain a presence on Pier Avenue and another 50 or more would rebrand, remodel or be replaced.

There have been other forces at play during this time, as well. Home prices in Hermosa have sustained a blistering average annual appreciation rate of 8.5 percent. Forbes’ 2016 list of most expensive zip codes ranks Hermosa 119th, with a median home sales price of $2.2 million, up from $540,000 in 2000. Hermosa Beach homes are more expensive than over 99.5 percent of zip codes, nationwide. Median household incomes have also outpaced the rise of incomes nationally.

Easy Reader food critic Richard Foss, noted, “Social change has magnified the importance of dining well. Those who live in affluent areas can exercise their food and drink experimentation more frequently than those who have to scrape together rent, but the food is such a part of aspirational California living that it is part of the caricature of our state.”

People, in general, are eating out more. Restaurant related expenditures recently exceeded groceries expenses for the first time. People also like to eat close to home and there is an increasing awareness of the benefits of organic, locally-sourced, and sustainably-farmed food. Even cocktails and beers have become crafted.

The Newman family took risks with both Palmilla and Tower 12 because they reasoned there were “enough bars already” and they could see what was going on with the increasing number of upscale restaurants in Manhattan Beach.

Jed Sanford, owner of the downtown Hermosa Abigaile, followed a similar line of thinking when he opened the upscale Dia de Campo and S&W restaurants.

“The demographics here are changing. More families want to make Hermosa their home,” he said.

Baran’s 2239 is relatively new on the scene but has already garnered 4-1/2 stars on Yelp and countless accolades. Los Angeles magazine listed it as one of LA’s 10 best new restaurants. Only one other South Bay restaurant has achieved this in the past several years.

“We wanted to do fine dining in a casual atmosphere and offer a menu with strong global influences. Ingredients are local and seasonal,” Gugliotta said,

Greenbelt’s Santomieri said he wanted to create a menu “with fresh ingredients coming daily from local farmers market produce.” They also wanted to offer items favored by women, who now make up 65 percent of their patrons.

Other notable Hermosa restaurants that have opened since 2010 include Source Café, Locale 90, The Standing Room and Hook & Plow.

With minimum wage hikes, rising lease rates, and high acquisition costs, restaurant owners are going to find it increasingly more difficult to bring new concepts to the market. Seasonality is a another issue. It takes more work in Hermosa to fill the seats during the winter months, especially since Hermosa has two to three times more restaurant seating capacity per capita than Manhattan Beach.

The consequences of Hermosa’s “social experiment” on Pier Plaza, though unforeseen, have been a significant plus for local diners. Chef-driven and professionally-managed restaurants with high quality ingredients are becoming the norm. Tower 12, Playa Hermosa, Rabano’s, Casa Vincenzo and Laurel Tavern are the latest examples of this and soon we will see Decadence, Radici and Serve Kitchen hit the scene with the same mindset. The opening of at least two hotels over the next several years will no doubt reinforce these trends.