Nose on the prize 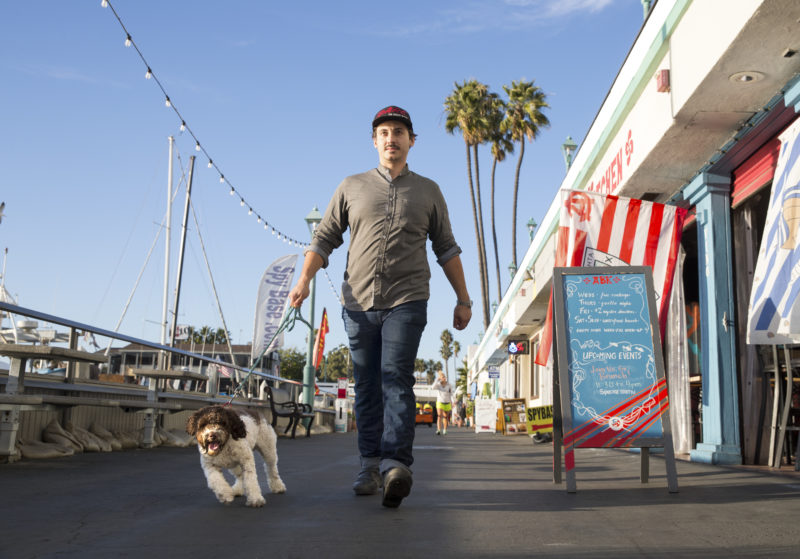 Chef Michael Mazzotta and his Lagotto Romagnolo Capo outside A Basque Kitchen on the Redondo Pier International Boardwalk. Photo by Brad Jacobson (CivicCouch.com)

If you hang around Redondo Beach you may have seen a mustachioed man on a bicycle being towed down The Esplanade by a small dog with curly brown and white fur. At one end of that leash is Redondo’s next media sensation, but it is not yet clear which end.

Meet Michael Mazzotta, chef at A Basq Kitchen, and Capo, a bouncy, friendly dog of an unusual Italian breed called Lagotto Romagnolo. The two will soon be competing at an Oregon event where they hunt one of the prizes of the culinary world, a musky, pungent fungus prized by gourmets.

Truffles are related to mushrooms and grow on underground tree roots. They are one of the few plants that humans have been unable to domesticate. Top quality specimens can sell for over $5,000 a pound.

As Mazzotta explained, “Truffles have the allure of being something humans can’t create or control. It’s a foraged product that grows in unpredictable places, so that humans can only find them with the assistance of partner animals.  They used to use pigs, but they recently switched to Lagotto Romagnolo dogs.  This breed was bred as as retrievers trained to hunt birds on the lakes in Italy. At one time the lakes dried up, and the breed almost went extinct until they found a new use for them. Truffles saved this breed.”

The use of these dogs to hunt fungi instead of avians only goes back a few decades. The fact that humans bond with dogs better than pigs is a major advantage, said Mazzotta. 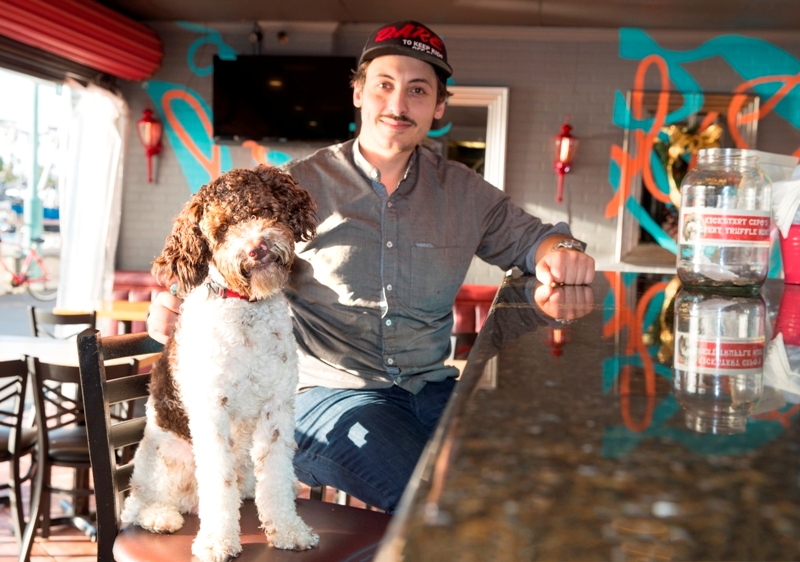 “Pigs have an acute sense of smell and are good hunters, but they’ll happily eat the truffles, so if you find it and he eats it you’re back at square one. Dogs are better for the job, and it’s not just that he doesn’t eat what we’re looking for. Capo wants to please, and we have a strong bond. The way he reacts to the scents blows my mind. The look in his eyes – he’s experiencing something no human can ever understand. There are levels and levels of scents that he has access to. With his mind and his nose, and his desire to excel at this, it’s incomparable to what a pig could do.”

Though he had dogs as a child Mazzotta had never trained one before. But after buying Capo as a three month old puppy he started burying  truffles and challenging the dog to find them.

“Training him was easy. They’re such smart animals that he understood immediately that this was the game, to use his amazing sense of smell and instinct to dig to unearth these gems. I just bonded with him, and it’s just us reading each other. Without words we communicate back and forth like that.”

Experienced dogs learn to ignore immature truffles and only dig up those that are ripe. This is only one of the skills that will be graded at the North American Truffle Dog Championship, which will be held in Eugene, Oregon in late January. Oregon forests are home to both a native truffle and colonies of transplanted European truffles that now grow wild. This year’s competition is the third annual test of dogs and their partner humans. It will be the first competition for Mazzotta and Capo, and they’ll be up against both two and four legged pros. The challenges come in two stages, only the first of which is open to the public.

“The first round is indoors, and there’s a set circuit where the truffles have been hidden. After that you’re out in the woods, foraging for the natural truffles. We’re going up early so we can do some foraging in before the competition, really putting him to the test in a real world situation. It’s really exciting to be able to do that without flying to Europe.”

There are plans to document the trip with a video, and Mazzotta has started a Kickstarter page, offering dinners using the truffles Capo finds as an incentive. Those dinners will be held shortly after their triumphant return, because the prized fungi deteriorate soon after being unearthed.

“The shelf life of a first-rate truffle is very short. Use it within a week of it being found if you want to experience what it really has to offer. You only get them fresh during a short period, which differs depending on the variety and where you are. There are summer truffles and winter truffles in Italy, and in Oregon they’re best from December through March. The rest of the year you have to use truffle oils, which is the only way of preserving the flavor.”

When asked whether there is any substitute for this temperamental and elusive plant, Mazzotta was emphatic. “There’s no way to recreate the flavor using any combination of other ingredients. It is such a unique product… For some reason when you add a truffle to a dish it elevates the other ingredients. You can’t pinpoint exactly what that is, it’s magic.”

Man and dog will be put to the test on January 25, and will come back with stories, a video, and some funky, musky, luggage containing some of the most prized plants on Earth. Until then, Capo will get his exercise practicing his scenting skills and riding down the Esplanade towing Michael’s bicycle.