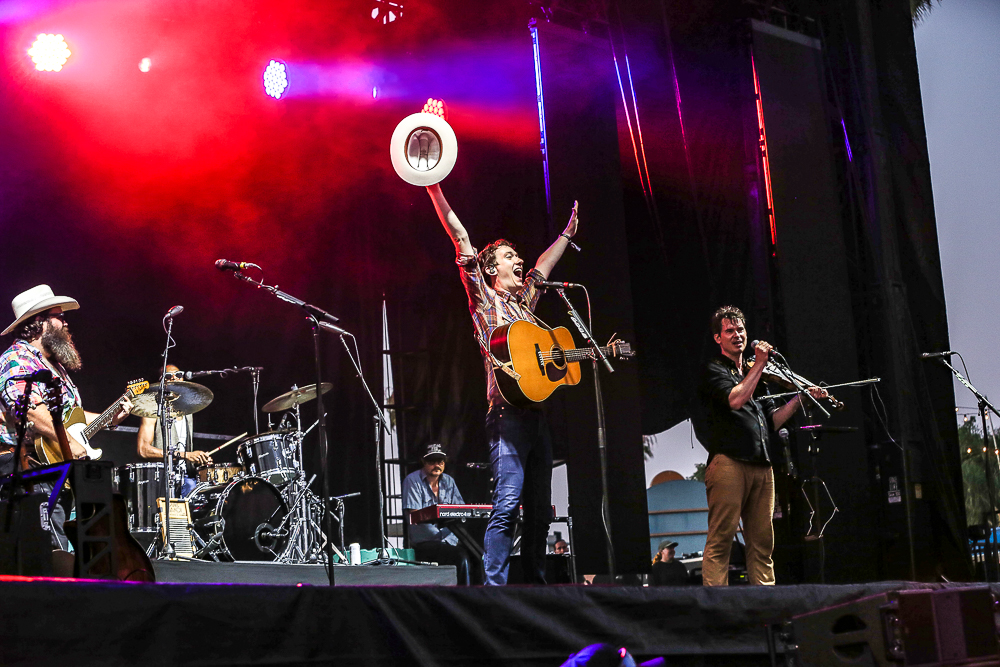 Myron Elkins and the Dying Breed kicked off the inaugural BeachLife Ranch Country and Americana Festival in Redondo Beach early Friday afternoon on the “Hither” stage. This up and coming 20-year-old from rural Michigan, and his band tore right into a rocking set under the midday sun, with songs from their debut EP, “Just Another Asshole with a Guitar.”  These guys dip into the same well of rock and country influences as predecessors like Chris Stapleton and Jason Isbell.

The Hither stage is on the Seaside Lagoon parking lot and is covered with soft, green artificial turf.

The second main stage is Yonder is on sand, which would be underwater were the Seaside Lagoon not have been drained for the festival.

There are short breaks between sets to allow the crowds time to move between the stages. 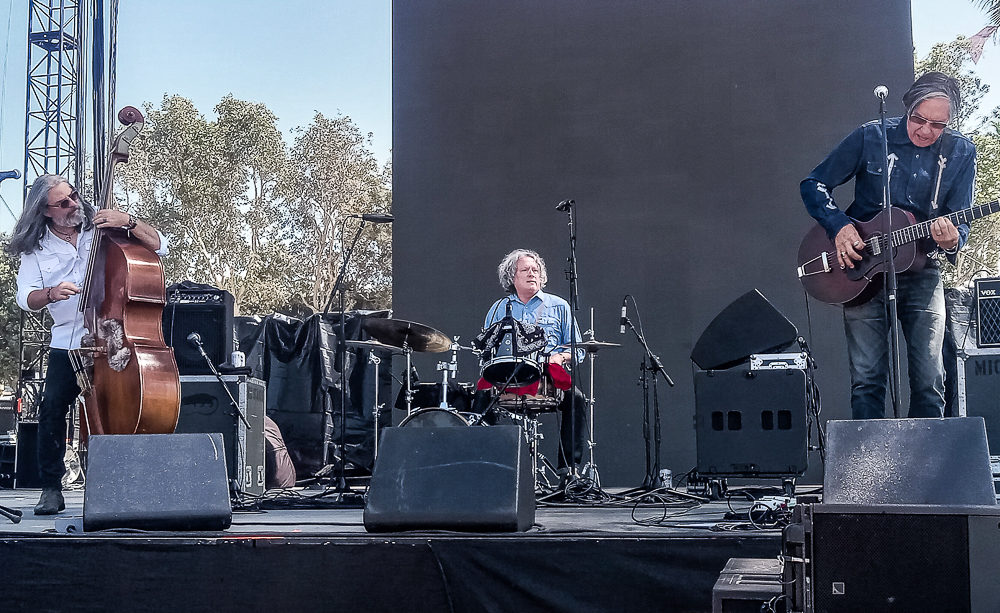 The bright side of John Doe

LA punk, and roots rock legend John Doe was first up Friday on the Yonder stage. He was joined by David J. Carpenter on double bass and Bryan Head on drums. The band is gearing up for a west coast tour promoting Doe’s new release “Fables in a Foreign Land,” a stripped-down, critically acclaimed collection.  Doe belted it out in the glistening sun, which seemed strange for  the co-founder of one of LA’s all-time best bands, X. His former band frequently sang about the dark side of life, and performed in all of LA’s darkest and grimiest punk rock dives.

Though Doe plays an acoustic guitar in his“folk” trio, it is plugged into a Vox amplifier which distorts and rocks along with the soft stuff. Their set was a solid combination of his roots driven solo material, his punky-country outfit, The Knitters, and X.  The high-energy set highlights were X’s biggest hit, “Burning House of Love,” and the classic California country hit by Merle Haggard, “Silver Wings,” which The Knitters covered. “My Darling Blue Skies” from Doe’s solo album, “The Westerner,” was perhaps the most perfect, on point song in the spirit of the festival.

Doe abruptly switched gears with “I Only Have Eyes For You,” a hit for The Flamingos in 1959. He and Carpenter gave us some “sha-bop, sha-bops” as they played it out, a warm sweet moment.  The trio concluded with the X classic, “The New World,” which morphed into the Beatles’ “Revolution,” which was a revelation.

White Buffalo were next on the Hither stage, another more rocking than countrified act, in a solid way.  White Buffalo, performing as a trio, is the stage name for singer-songwriter Jake Smith from Eugene, Oregon. His albums have become more rocking along his rootsy way. When he turns on full vocal throttle, there’s some righteous hints of Eddie Vedder, in a good way, not in a Creed way.

Next, Austin, Texas based Jamestown Revival took over on the Yonder stage. The six piece band grew out of the folk duo Zach Chance, and Jonathan Clay. Their sound is built around the gorgeous harmonies of these two childhood friends. A highlight of their performances is when they break a song down to vocal harmonies, and minimal instrumentation. The dynamic was effective, and a welcome change from the inappropriate, and unwelcome amount of thumping, subwoofer bass that overwhelmed the mix of every act on both stages all day long. It’s a frequent miscalculation in the concert business these days for organic and acoustic based live acts.  Speaking of bass, kudos to the rock and roll fashion dedication of Revival’s bass player, who rocked in the hot afternoon sun in his all black black leather jacket, hat and tight pants.

The band name is a tribute to the early U.S. settlement Jamestown, and to Creedence Clearwater Revival. True to their name they are Americana in earnest. During a short-lived relocation to o LA they wrote “California (Cast Iron Soul).” The anthemic song was the highpoint of their set, and had the swelling crowd sing “California, I don’t even know you, Taking me away from home…”

Pete Yorn, on 12 string, and his six-piece band performed together for the first time in two years on the Hither stage. It was easy to see they were stoked to be in front of a crowd. In a nod to the of ubiquitous corporate whiskey advertisements, Yorn harkened back to his debut release (Musicforthemorningafter 2001) to dive into the popular “Life on the Chain” lament, “the first track on an old album” – “…as a joke, I sent a bottle of whiskey.” Yorn is effectively a roots rocker for the new millennium, a seasoned pro at this point. Along with songs from his decade-long career, he debuted a few promising songs from his new album, “Hawaii.”  Prior to a crowd-pleasing cover of the Rolling Stones’ “Dead Flowers,” Yorn mentioned it’s rumored to have been written by Gram Parsons rather than Mick and Keith. The ‘controversy’ is traced to “Wild Horses” because the Flying Burrito Brothers covered it. The Stones were indeed greatly influenced by Gram, and that was the spark of their country excursions.

Waxahatchee, the baby of singer/songwriter Katie Crutchfield from Waxahatchee Creek in central Alabama was next on the Yonder stage. This was the first set of the day that was more melodically driven than rhythmically, in the best of ways. Her trio’s songs had a nice, understated backbeat, with charming harmonization between Crutchfield and her bass player. Along with the chance to perform songs off of her most recent release, 2020’s Saint Cloud, shared two new, solo acoustic songs.  Her band returned as the setting sun was catching her face to cover Lucinda Williams’ “Abandoned.” 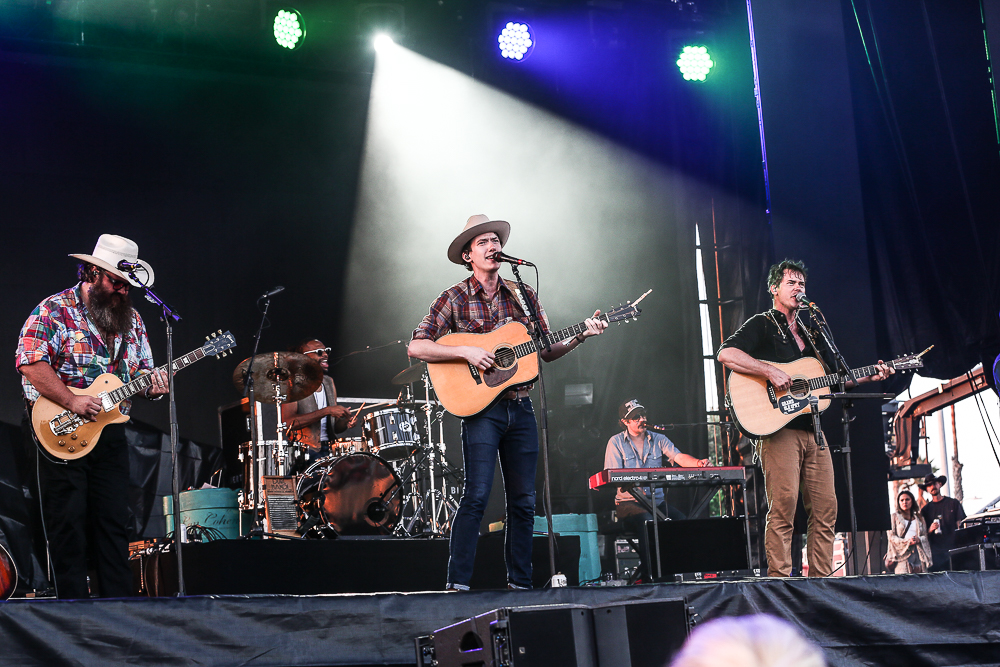 Old Crow, with a Dylan assist

Everybody must’ve finally got out of work when the breeze blew and dusk set in for the Old Crow Medicine Show on the Hither stage. This six-piece outfit most likely exemplifies the target demographic of “RanchLife” – loud and rowdy with songs about cocaine and whiskey, all done in a high-energy, partying redneck way. The multi-instrumentalists mix in banjos, fiddles, and keyboards, along with the traditional guitar/bass/drums.  The drummer would fly off the drum riser to stage level, and get down on a washboard. It was great stuff.  These are the guys who found the fragments of a partially written Bob Dylan song, discarded from the “Pat Garrett and Billy the Kid” film, and turned it into “Wagon Wheel,” one of the biggest selling singles of all time, with a boost from the Darius Rucker cover,  guaranteeing Old Crow a career. 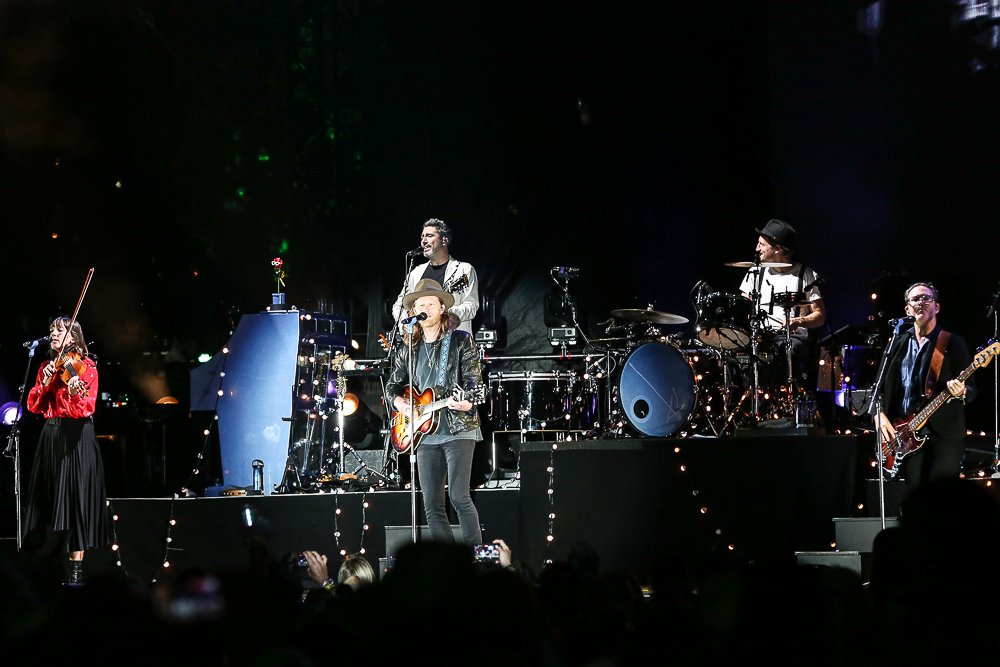 Lumineers light up the night

Yonder stage headliners, the penultimate act of the night, began with a darkened stage, and a subtle video, leading to their dramatic entrance. The house was full, and the light show was at its most dramatic as dusk became the night sky. Founding members Wesley Shultz, and Jeremiah Fraites hail from Denver, Colorado and are yet another singer/songwriter duo that grew into a band. When they went into their hit “Brightside,” the crowd was fully on board. It was the first real communal rock and roll moment of the night. Their music is another version of Americana mash-up, in the same class as Mumford & Sons, The National, Bon Iver, et al. It’s dramatic, atmospheric and moody. They had the crowd in the palms of their collective hands when they launched into their early hit “Ho Hey,” which became an impressive triumphant, feel-good singalong.

Hall & Oates, the most well known country artists on the roster,  took the stage for the finale of the festival’s first day. They played to a packed crowd, save for the mostly empty corporate VIP areas that flanked the stage. These guys have been at it since 1972, and are in their 70’s, but didn’t show their age, at all. This was a top notch set from an act that can perform a whole concert of hits, which they did.

H & O’s touring organization is top notch. The audio/video intro with snippets of their hits mixed into the soundtrack, enhancing anticipation for the headliners. Even the sound engineering was spot on. The thumping subwoofer bass excess that polluted the previous acts was gone. It is a good bet the difference was H & O had their own technicians, who get a good full spectrum of clear sound, with good full bass, without the hip-hop thump, bravo.

They’re essentially a R & B/blue-eyed soul, Philly pop act. From “Rich Girl” to “Method of Modern Love,” two of country music’s greatest hits, with a lot more in-between, the H & O show left nothing to be desired.  The video segments produced for specific songs on the large screen behind the stage were engaging and often beautiful. The giant image of a 1970s television set in a living room robustly framed their excellent cover of the Righteous Brother’s hit “You’ve Lost That Loving Feeling,” setting an appropriate melancholy mood. It made this reporter’s night when seemingly out of nowhere, H & O threw a curve ball with an unexpected deep cut from their 1974 album War Babies, “Is It a Star,” which is more Steely Dan/fusion than AM pop. Perfect for a night out at the beach. ER