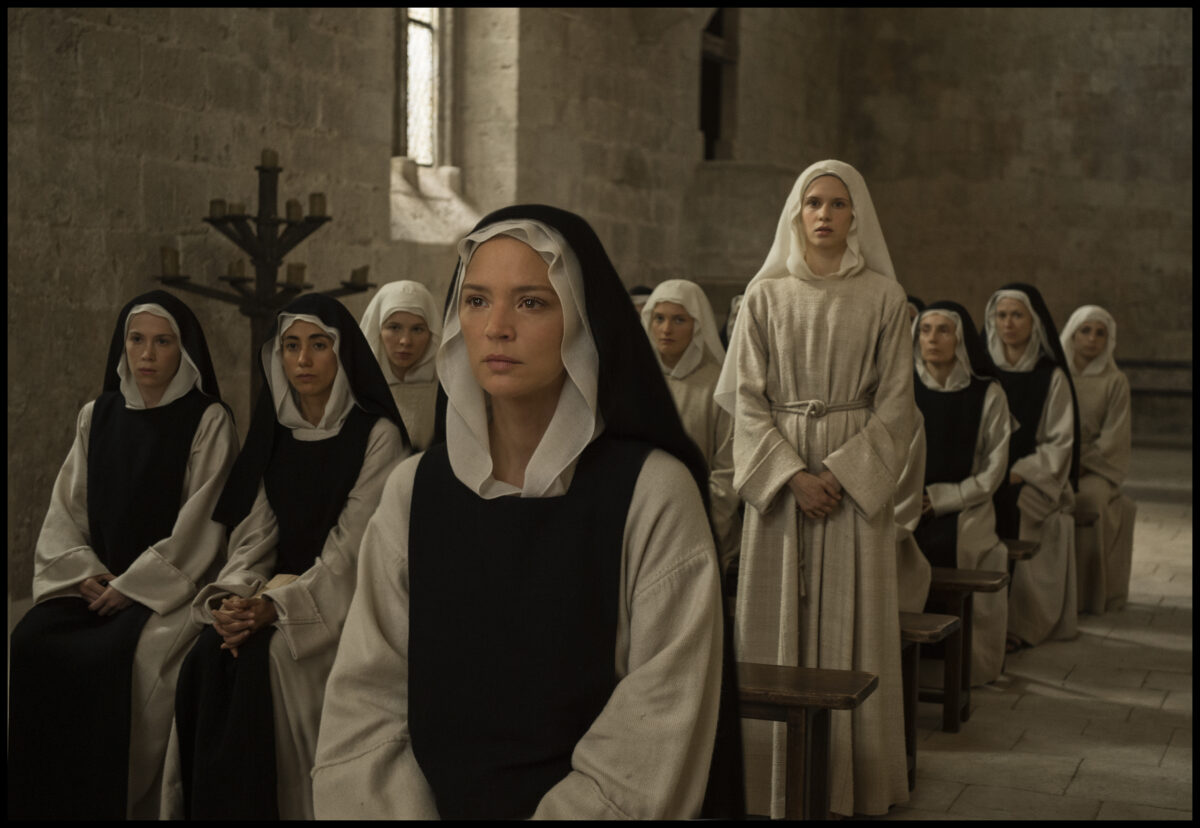 Virginie Efira as Benedetta and Daphne Patakia as Bartolomea in "Benedetta." Photo courtesy of IFC Films.

It is fairly clear what the ever controversial Paul Verhoeven had in mind when he optioned Judith C. Brown’s scholarly tome Immodest Acts: The Life of a Lesbian Nun in Renaissance Italy. What isn’t so clear is what his emphasis was going to be because this serio-comic film often veers wildly from gleeful sex romp to serious contemplation about religion, martyrdom, and power politics. In this messy and wholly entertaining film, he gives us a little bit of everything.

Beautiful, imaginative, and visionary, nine year old Benedetta is brought to the Theatine convent by her parents to begin her life as a nun. Benedetta, who, from a very early age, conversed with the Virgin Mary, was most pleased to enter the order. When a statue of the virgin fell on her but left her uninjured, the other nuns considered it a miracle, the first of several to which she would be credited. When the Abbess (head nun) was asked if she would have this miracle registered with the authorities, she said no. After all, she explained, “Miracles are like mushrooms, they pop up everywhere.”

Benedetta was a miracle magnet. Not content with the ordinary, she began conversing with Jesus. Prone to trances, she would have visions that further set her apart from the others. When, during confession, the priest admonished her for the joy that communing with Christ brought her, he told her that holiness is only achieved through suffering. It was then that she began experiencing agonizing pains. Her torments were such that a novice was sent to share her cell and calm her through the night.

Bartolomea, the novice, knows just how to calm those frayed nerves and for the lovers of the flesh, this is where it gets kinky. Exploring each other in depth, Benedetta grows hungry for more; more sex, more power, more visions. Having already replaced the revered Abbess in a move of political adroitness, Benedetta’s visions and her channeling of a male alter ego of power and evil expand.

Charlotte Rampling (left) as Sister Felicita, the Abbess, and the novices in “Benedetta.” Photo courtesy of IFC Films.

Discovering the true nature of Benedetta’s relationship with Bartolomea, the former Abbess leaves for plague-ravaged Florence to report the heresy to the Papal Nuncio, Alfonso Giglioli. The Nuncio, corrupt as only the very powerful dare to be, agrees to leave for the convent in Pescia. Things aren’t going well in Florence, in any case, and he needs to escape the pestilence that does not discriminate between the holy and the sinners. He vows that Benedetta will be put on trial, and if found guilty, she will burn at the stake.

Verhoeven has seasoned this pot with interesting characters and ideas. The convent, which was an outlet only for families of means who could afford the dowry that had to be paid to gain admission, was one place where women could be reasonably independent. As Benedetta illustrated, a woman with visions and a clear path to God was not to be interfered with, regardless of the presence of a male hierarchy.

The acting gives this film its necessary credibility. Led by Virginie Efira as the beautiful Benedetta, she veers effectively between beatific and demonic. Daphne Patakia plays Bartolomea, a girl rescued from a life of sexual abuse in the outside world who gains shelter in the convent as a novice. It is she who introduces Benedetta to a life of carnal knowledge. Both women are easy to watch and bring the necessary conflict to their respective situations. 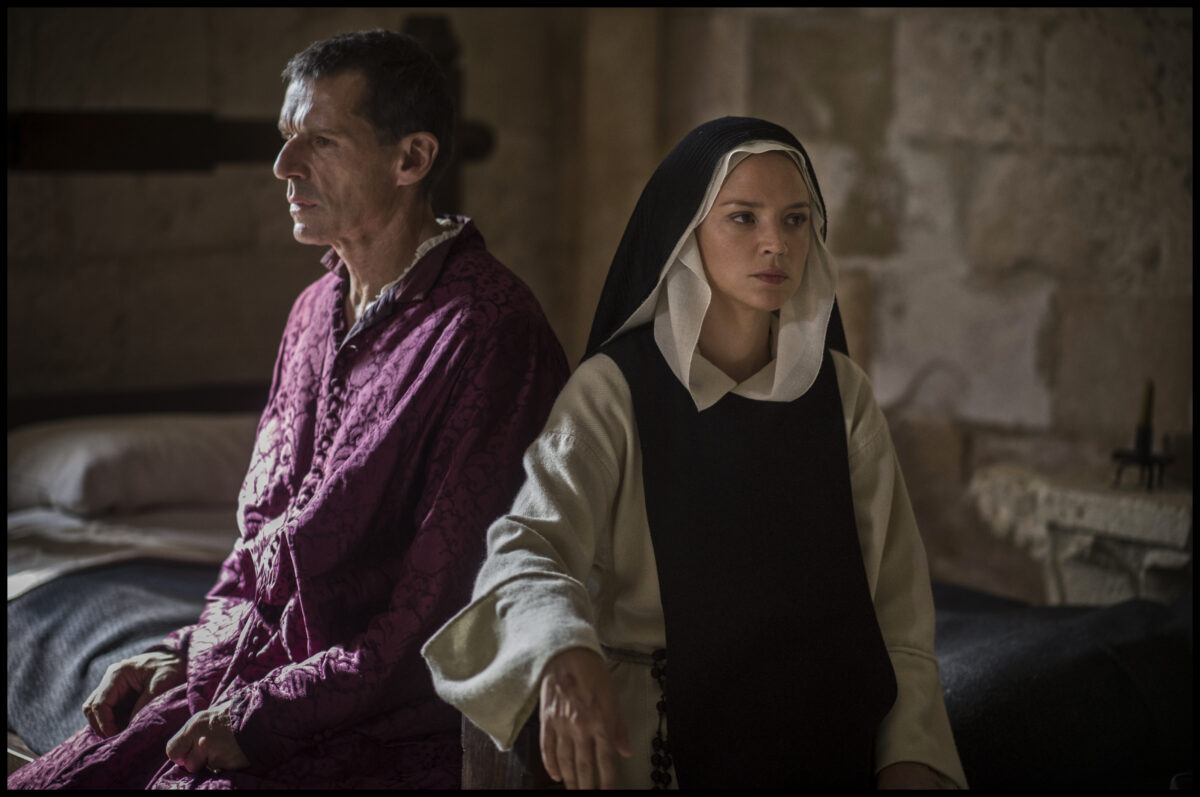 Lambert Wilson as the Nuncio and Virginie Efira as Benedetta in “Benedetta.” Photo courtesy of IFC Films.

It is, however, the elder statesmen of this film that bring the most status and believability. Lambert Wilson as the Papal Nuncio is glorious. What fun he must have had playing the role of a corrupt Vatican official surrounded by his pregnant serving girl and financial lackies in his glamourous palace. This role is the polar opposite of the doomed pious and humane monk he memorably portrayed in “Of Gods and Men.” The ever beautiful Charlotte Rampling plays the Abbess of the convent with gravitas and cool, calm assurance. Infinitely watchable, Rampling is wearing her age graciously and this only serves to heighten the conflict between Benedetta and the Abbess. It is no wonder that both Wilson and Rampling continue to have significant international careers.

Whatever your impressions of this movie, I assure you, you will never be bored.

Opening December 3 at the Laemmle Royal, Town Center 5, and Playhouse 7. VOD will follow on December 21.