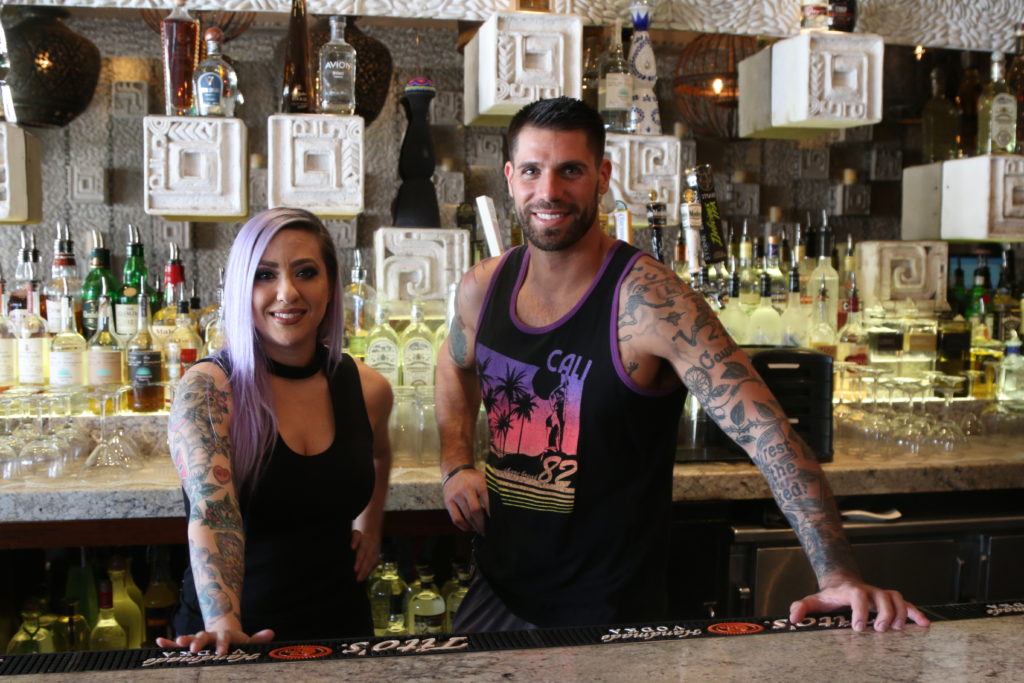 Bartenders Abby Kahan and JD Ciasulli have been at Palmilla since the Pier Plaza destination restaurant opened in 2011. Photo

JD Ciasulli and Abby Kahan have been at Palmilla since it opened in fall 2011. In that time, craft cocktails have exploded in popularity, with bartenders across the country donning suspenders and churning out elaborate libations. The trend has had its own iteration in Hermosa Beach. On the one hand, Palmilla’s high-concept Mexican fare is targeted at more discerning customers than the other side of Pier Plaza. But its location in what has become one of Southern California’s night-life capitals means that Ciasulli and Kahan don’t always have the luxury of time.

“We’re high volume, but you have to try and be a mixologist too,” Kahan said.

Even simple drinks can get complicated with the bar’s ample ingredient list.

“A lot of people will say, ‘Can I get a vodka soda, but muddle lime, and cucumber, and watermelon, and…’” Ciasulli said.

It gets easier with practice. The two are deeply familiar with the restaurant’s extensive drink menu, and say people are often willing to let an experienced bartender steer them in the right direction.

“I would definitely say the Diablo is our best seller,” Kahan said of the restaurant’s cucumber-jalapeño margarita.

Ciasulli serves as the restaurant’s bar manager, and the two do not often work together, except on big weekends like the upcoming Fiesta Hermosa, when it’s “all hands-on deck.”

The restaurant’s Mexican theme has given the two an appreciation for tequila they did not have before working there. They describe it as a versatile spirit that can be many things to many people. It just takes a few questions about what flavors the customer likes.

“If people don’t like a particular drink, I can usually come up with something on the fly,” Kahan said.

The two do just as much remembering as they do guessing, however, saying the bar is powered by a crew of regulars with whom staff has forged tight bonds. It’s when people are willing to experiment that their creativity has a chance to shine.

“There’s so many layers, the drinks are almost a meal in themselves. ” Ciasulli said.