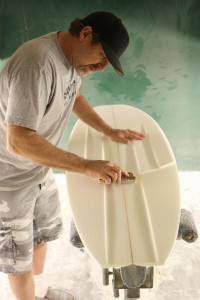 Shaper Dennis Jarvis pushes the envelope when it comes to design.

Surfers who wonder why a consensus has never been reached on what makes the perfect surfboard, should talk to our readers’ picks for best shop and best underground shaper.

This year’s Best Shop Shaper Dennis Jarvis and Best Underground Shaper Dennis McGivern both started in the surfboard business in the late 1970s sweeping foam dust out of shaping bays – Dennis under the tutelage of Eddie Talbot, McGivern under Wayne Miyata. Several decades and many thousands of boards later the two have arrived at very different opinions on what makes a good board.

“Deep dish concaves are making a comeback,” Jarvis said last week as he shaped a board featuring a step bottom, deep concaves in the tail and a lot of tail rocker. The board is for South Bay surf standout Dane Zaun.

“I’ve always found the best boards have flat bottoms and smooth easy rocker. I like the old tried and true,” McGivern said when we spoke to him last week.

Both are eloquent in defense of their beliefs.

The bottom experimentation, Jarvis said, is driven by the desire for a board that is fast and loose, but also thicker for easier paddling. Both Jarvis and McGivern agree that potato chip-thin boards are out of favor, even with the pros.

“When I was a kid I wanted to ride a board that the pro I wanted to emulate was riding. Now Kelly Slater is riding a pig at Pipeline,” Jarvis said by way of explaining the acceptance of thicker, easier to paddle boards.

Jarvis calls the board he is designing for Zaun a Fireball Fish. The flat nose area provides speed, the concave tail makes the board loose. 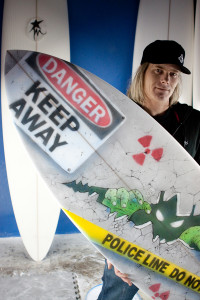 McGivern was a glasser before he was a shaper and estimates he’s glassed over 200,000, starting back when Pat Reardon owned Shoreline Glassing.

McGivern has a more subjective view of what makes a good board.

“A lot is in the eye of the beholder. Some of my favorite boards have been god-awful ugly,” he said. But it’s doubtful those were boards he made.

“I’m adamant about superior quality. I surfed well as a kid and I’m able to transfer that into a board that is what competitive surfers want,” he said.

McGivern is back making boards where he began, in the old Shoreline factory on Cypress in Hermosa Beach, which is now run by Aquatech.

“I do it the old way. I shape the boards, glass them, and sand them. I take it through every step instead of sending the work to people who may not have the enthusiasm I have.”

Their different approaches not withstanding, both agree that every surfer, regardless of ability, should talk to his or her shaper.

“I don’t shape stock surfboards. Every board is made for somebody to match their ability, even if they don’t know what they want,” McGivern said.

Jarvis is taking custom board making into the digital age with a CAD program on a computer in his Pacific Coast Highway shop where he’ll work with surfers on the designs of their boards. After the current remodel is completed, he plans to install large monitors to show off the design as it develops. 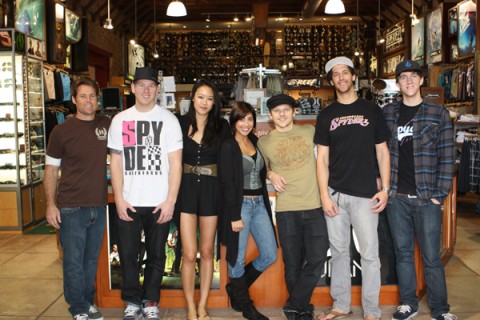 Some businesses branch out. Some sink deep roots. Dickie O’Reilly and Dennis Jarvis have chosen to sink deep roots in the South surf/skate/snow community. Their two stores earned Best Of titles in the surf shop, skate shop, snowboarding and men’s clothing categories.

Jarvis has been shaping surfboards since he opened the first Spyder shop on Pacific Coast Highway in 1983. Top local surfers and pros including Tom Curren rely on him to push the envelope in design. But he hasn’t forgotten that, as he put it, “The average surfer just wants a board that floats and he can have a good time on.”

In addition to surfboards, the PCH store has large skateboard and snowboard departments. The most popular skateboards, Dickie said, feature bamboo and koa decks with clear grip tape that shows off the wood grain. In snowboards, boards with rocker that made their appearance last year are now the most popular boards he said. They’re more forgiving, Dickie explained.

Spyder II on Pier Plaza in downtown Hermosa earned O’Reilly and Jarvis their Best of Men’s Clothing honors. The good news for surfers, O’Reilly said is that the comfortable and stretchy board shorts that were in the $80 to $200 range last year are now competitively priced with traditional cotton/polyester shorts, in the $40 to $60 range. In clothing, he said denim jeans and Sanuk’s “These are not shoes, they’re sandals” shoes are among Spyder’s most popular items.

In keeping with its commitment to community, Spyder II will once again host the Surfers Walk of Fame festival on April 17, headlining by pro surfer turned rock star Donavan Frankenreiter. 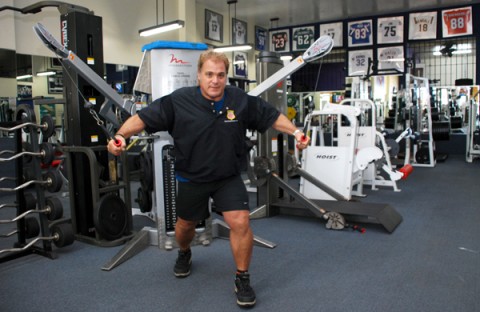 Trainer Luiz DeFreitas believes the family atmosphere and high level of service make The Yard a popular choice for everyone -- from elite athletes to those looking just to stay in shape. Photo

Delivering state-of-the-art training methods based on scientifically sound principles, The Yard maintains a comfortable atmosphere for world-class athletes and weekend warriors alike. Run by Troll Subin, The Yard offers top-flight trainers who provide the same service to their local clientele as they do the many Olympians and professional athletes they train such as Maria Sharapova, Kobe Bryant, Mike Dodd, Nancy Mason, Carson Palmer, Mike Piazza and Eric Karros.

“Our service is among the finest and people feel at home here,” said long-time trainer Luiz DeFreitas. “It truly is a neighborhood gym. You can park out front on the street, enjoy the surroundings of the beach and feel like family. Each week, I train people who have been with me since I started at The Yard in 1996. Many of our professional athletes call us when they are away during the season just to see how things are.”

The most comprehensive fitness center in the South Bay offers more than 15 classes with childcare services available for the low cost of $10/month. In addition to yoga, pilates and a registered dietician, the 17,000 sq. ft. state-of-the-art facility features more than 50 pieces of equipment, freestyle weights ranging from 2-200 pounds and personal TVs on treadmills and elliptical machines.

“Nobody gives you more for just $27/month,” CHF General Manager Mat Wessels said. “We have a welcoming, community gym feel with all the benefits of a big facility and none of the crowds, which are features that attract our outstanding members.” 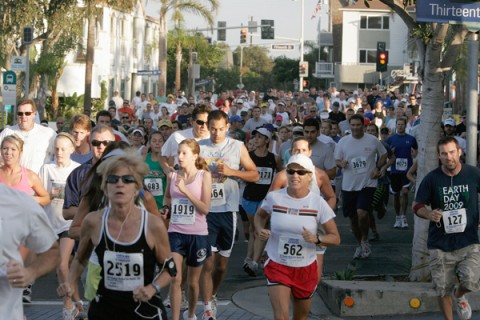 Celebrating its 33rd year, the Manhattan Beach 10K draws thousands of runners and spectators to the city, many who enjoy the festivities of the Hometown Fair held the same weekend. Photo

Founded in 1978 by a group of local runners, the Manhattan Beach 10K Run has held true to its original concept of being a true community event without the aid of corporate sponsorship. The Race Committee is comprised solely of volunteers and the City of Manhattan Beach provides law enforcement, paramedics and public works support.

“Profits” acquired from entry fees at fed back into the community in the way of scholarships to high school seniors living in Manhattan Beach along with upgrades to recreation facilities at local schools and parks. Throughout the years, the event has donated more than $250,000 to the community.

Nathalie Higley, 40, of Redondo Beach, is the women’s two-time defending champion. An elite distance runner who is a perennial top finisher in local races, Higley said the Manhattan Beach 10K is one of her favorite events. “It’s a great local race with lots of people. The race goes for a good cause, helping the kids’ high school and various causes. It’s nice when people race not just for the money.”

The course, which begins at 3rd Street at Valley and Ardmore, winds through the city, ending at the Manhattan Beach Pier. Last year the event attracted more than 4,000 runners of all ages including some of Southern California’s elite athletes.

The 2010 Manhattan Beach 10K tradition continues on Saturday, Oct. 2 at 7:30 a.m. where – in the community spirit — medals will be awarded to the top 10 finishers in each group. For more information, visit MB10K.com.

Best of the Beach