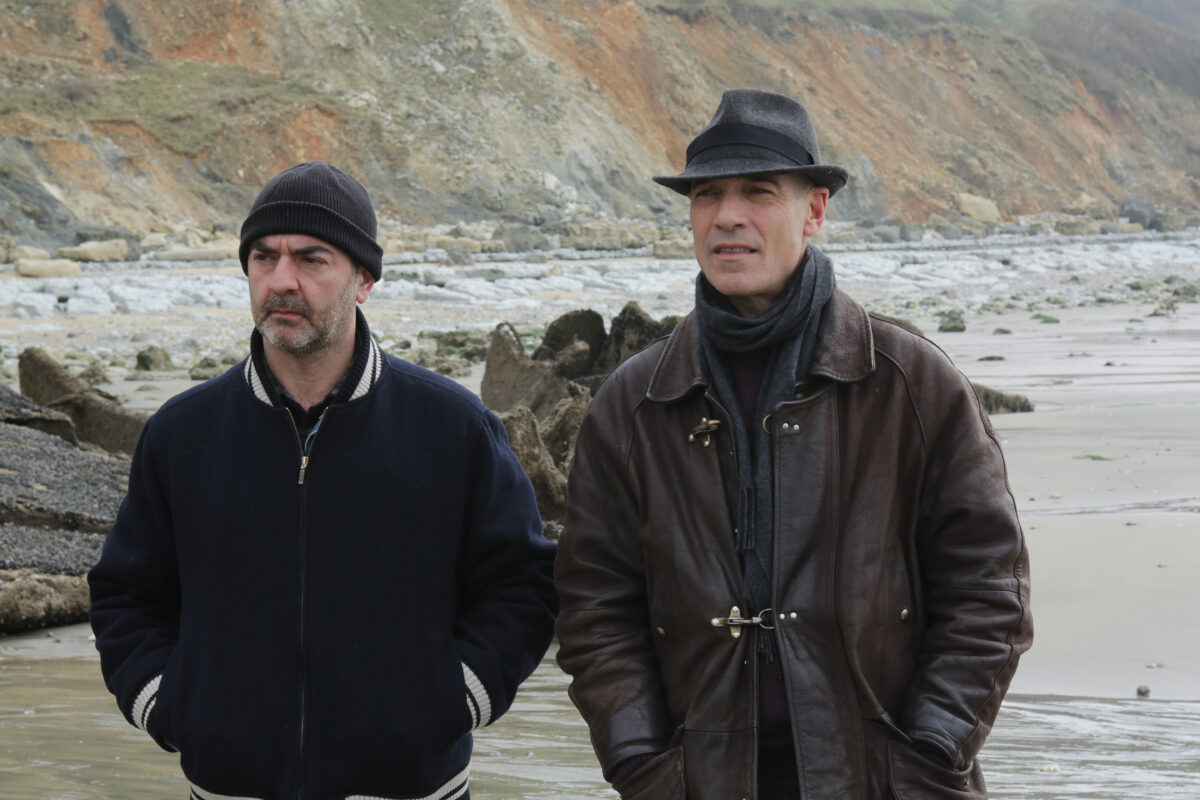 Bruno Solo as Winckler and Jean-Marc Barr as Faraday in "Blood on the Docks." Photo courtesy of MHz Networks.

Bruno Solo as Winckler and Jean-Marc Barr as Faraday in “Blood on the Docks.” Photo courtesy of MHz Networks.

“Blood on the Docks,” which in French is “Deux Flics sur les Docks would have been better and more cleverly translated as “Two Cops on the Docks,” continues to follow the intrepid “non” partners Richard Faraday (Jean-Marc Barr) and Paul Winckler (Bruno Solo). Non-partners is perhaps a misnomer because, for all intents and purposes, they work together on all the crimes that come their way in the French port city of Le Havre. Faraday, stable, even-handed, by the book, was originally partnered with Winckler but divorced amicably because of Winckler’s procedural short cuts and tendency to abuse the rights of suspects. This split is similar to a “friends with benefits” relationship because they are still together solving crimes, each in his own way – cerebral for one, physical for the other.

This is a pure procedural drama, so don’t look too far for character development. Both men are widowed, Faraday has a deaf son who is trying to find his own way; Winckler is a loner with questionable ties to the underworld. Additional characters who populate the series are Lucie (Mata Gabin), their commander; Julie (Lisa Manili) the wide-eyed rookie assigned to Winckler; Bill Gates (Guillaume Viry), the aptly nicknamed tech expert; and Bazza Swaty (Emmanuel Salinger) the underworld boss fronting seemingly legit businesses with questionable ties to Winckler, his childhood friend.

Each 90-minute episode solves a murder, usually two that are seemingly unrelated but end up tying together. There are many positives that can be noted. First, as mentioned previously, these are procedurals that are unencumbered by character backstory and growth. A crime happens, suspects are identified, another seemingly unrelated crime occurs, some of the same suspects seem to be involved; everything isn’t as it appears. Faraday and Winckler approach the crimes in their own ways, both separately and together combining the two styles, along with a dash of tech savvy from Bill Gates, and the crimes are solved. All this makes for a satisfying evening’s entertainment.

The episodes are tight, all based on a series of books and characters originally created by Graham Hurley from his mystery collection entitled “Faraday.” Hurley, a British writer set his Faraday novels in the English seaside town of Portsmouth. Le Havre is probably a more interesting and complex locale. The stories may be solid but the productions are somewhat flaccid. The episodes would be more compelling and move at a faster pace if they used a 60-minute format instead of a bloated 90-minute time frame. Sometimes it feels more like a Sunday afternoon walk than a run down a dark alley.

The cast is pretty good, led by Barr, a Franco-American (fun fact, he graduated from Mission Bay High School in San Diego) with an international career who exudes sympathy and warmth but has no edginess. Solo, an established French television actor, has his scowl down pat. He’s great at playing the “bad good guy” but there’s very little surprise in his actions. Gabin as their boss is given little more to do than say things like “Please follow orders this time.” An exceptionally beautiful woman, a dead ringer for Angela Bassett, it would be great to see if she can actually do more than look pinched and annoyed. The only actor to exceed the expectations of his role and exhibit depth is the recurring character of Bazza, the gangster. Played by Emmanuel Salinger, he is recognizable from international series such as the recent “Les Sauvages,” “Spiral,” and “A Village in France.”

All in all, however, “Blood on the Docks” offers plenty for those seeking a straightforward cop show and is a welcome addition to the MHz Choice array of French procedural mysteries such as “The Art of the Crime,” “Murder In,” and “Perfect Murders.”

Episode 1 of Season 2 launches on July 27, with each of the next three episodes streaming in the subsequent weeks.