“Both Sides of the Blade” – Sharp and sharper [MOVIE REVIEW] 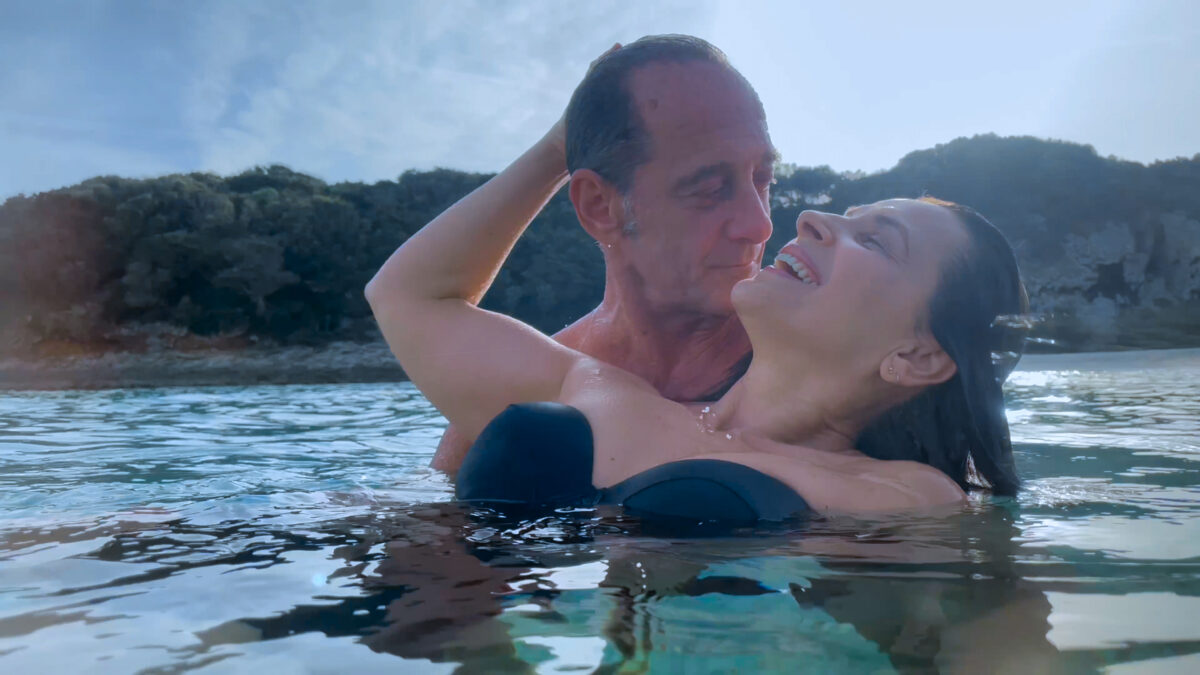 Vincent Lindon as Jean and Juliette Binoche as Sara in "Both Sides of the Blade." Photo courtesy of IFC Films.

Claire Denis, the estimable French director, is the very definition of enigmatic. Ambiguous, elliptical, she doesn’t spell things out for her audience. This is, more than likely, deliberate because she is going on a journey herself, one where she is unsure of the outcome. Writing with Christine Angot, they adapted Angot’s novel Un Tournant de la Vie.

Wordlessly, “Both Sides of the Blade” opens on an idyllic tropical isle where Sara and Jean meld together in the blue water far from their home. It is a vacation together, long desired, and the depth of their feeling is in their eyes, the seductive movements toward each other, and their tender kisses. Establishing character without dialogue, we come to learn that Jean and Sara have been together for a long time. It is only gradually that we learn snippets of their pasts. 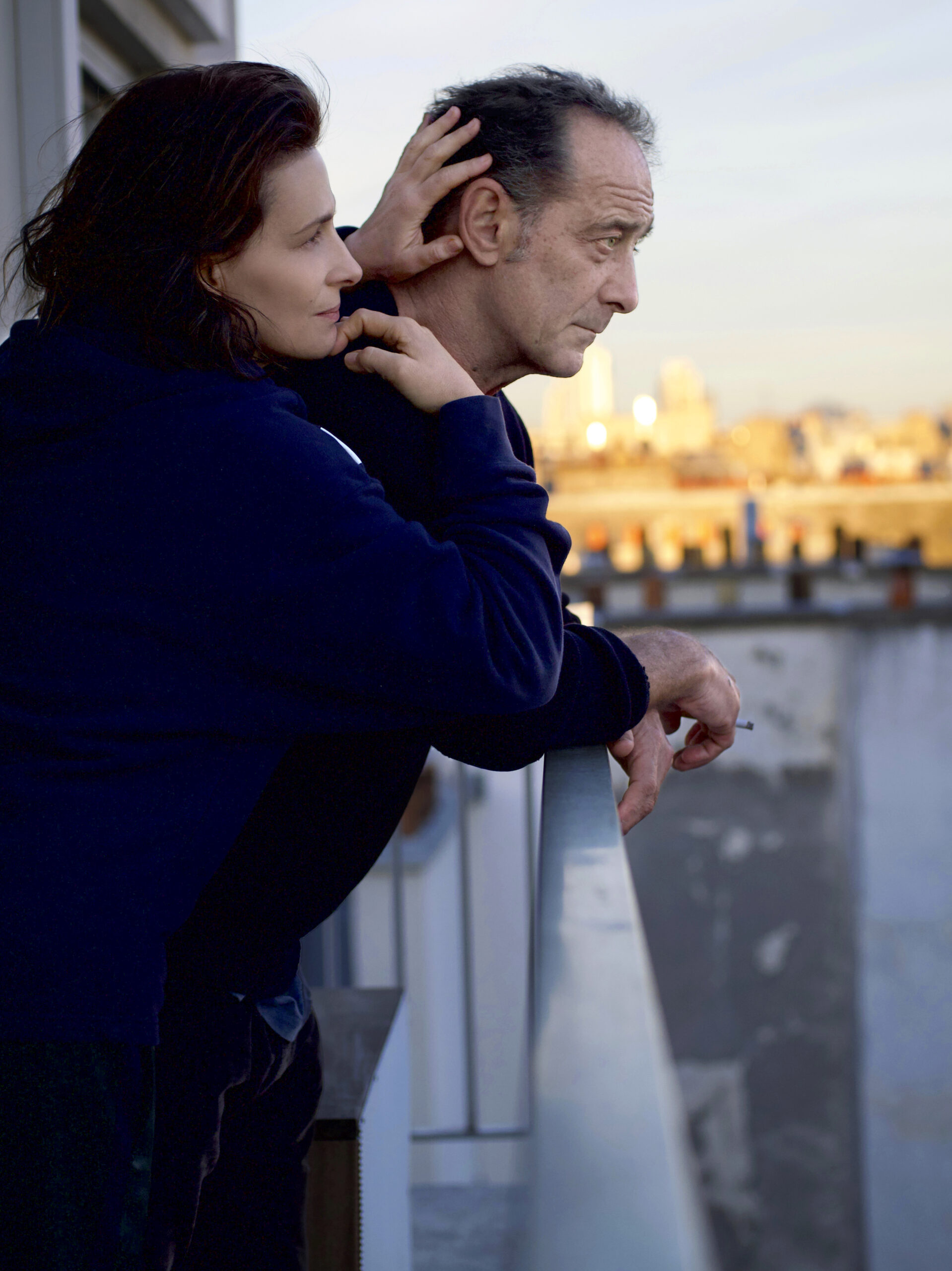 Juliette Binoche as Sara and Vincent Lindon as Jean in “Both Sides of the Blade.” Photo courtesy of IFC Films.

Sara had been in love with François, her lover of four years, when, at one critical moment, she realized how little she actually meant to him. Jean was his best friend but in that moment Sara saw that Jean brought to his marital relationship, concern and selflessness, something François lacked in theirs. Sara left her liaison and eventually found happiness with Jean, who had left his wife and child. It is now ten years on and the partnership still seems solid. Hints are dropped about Jean’s past. Jean has been to prison, for what or how long, Denis reveals very few clues. He is insecure and out of work; his self esteem is showing cracks in his relationship with Sara.

Out walking one day, Sara sees François from afar, triggering those “what if” kinds of questions. He’s self confident with an assured swagger; Jean no longer is. What might have been a passing thought turns into a full on existential crisis when Jean mentions that he has run into François and they will be going into business together. Jean, a famous rugby star in the past, will be recruiting young players for François’s new agency. Sara will now be brought into close proximity to her “what if.” What will this mean to her relationship especially when François indicates his desire to pursue her again?

Denis is deliberate in painting the new encounters between Sara and François as dreamlike. It becomes increasingly apparent that these meetings are both real and sexual. What is François’s motivation? Is it payback to his former friend for the theft of his girlfriend? Is there any depth of feeling for Sara? More specifically, does François have any depth? As Jean becomes aware of this relationship, he begins to untether from Sara.

Grégoire Colin as François and Juliette Binoche as Sara in “Both Sides of the Blade.” Photo courtesy of IFC Films.

An unexplored, and unnecessary, storyline involved Jean’s son from his marriage, long living with his grandmother devoid of any contact from him. Without this storyline, the past lives of the trio had been developed obtusely and ambiguously, allowing the audience to bring their own interpretations to these characters and their imagined flaws. Introducing hard evidence of Jean’s tangible shortcomings undercuts his amorphic failings as a man in his relationships. In a way, it simplifies the choices Sara makes, and that’s a pity because they should have been as inscrutable as the men in her life. The French title, Un Tournant de la Vie, literally means a turning point or pivot in life. The turning point in Sara’s life was seeing François for the first time in ten years and what it did to her psychologically.

Denis has the benefit of an outstanding cast. Vincent Lindon as Jean is another great actor capable of infusing character simply, using his eyes, the lines in his face, and small gestures. Long a staple of French cinema, he was most recently in “Titane,” although probably more familiar to audiences from “The Measure of a Man,” and “La Haine.” Grégoire Colin plays François. A cypher, he successfully leaves us guessing as to his character and his motives, making him the ultimate catalyst for action.

Oscar winner Juliette Binoche can do no wrong. Her sphinx-like presence allows us to interpret her actions through our own lens. Luminously beautiful, her every movement is seamless and character-driven. It is impossible to take your eyes away from her. Her mere presence would make any film watchable but here, she brings inscrutability to whether life can have both passion and depth of feeling. What is love? She takes us on that journey without an answer, just the knowledge that the search for both is worthwhile.

Opening July 8 at the Laemmle Royal.