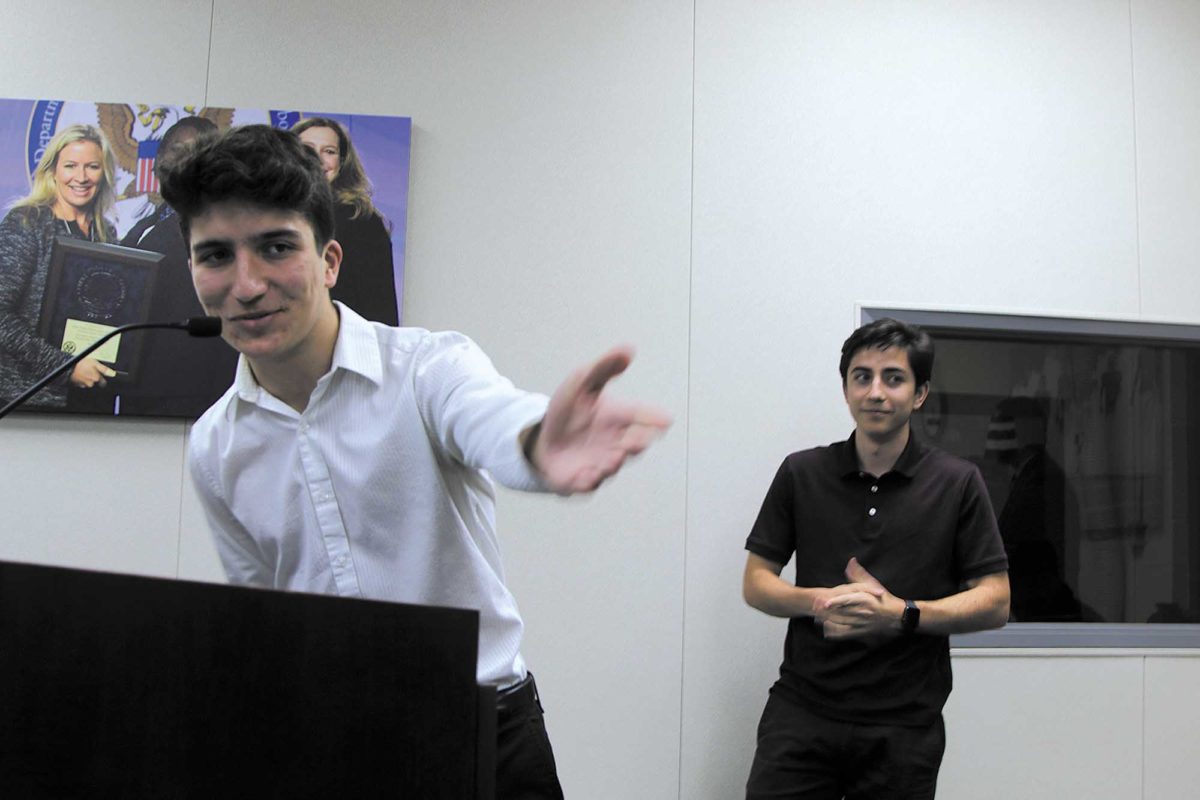 Julian Quevedo and Koray Mentesoglu, winners of the Congressional App Challenge, speak to the Redondo Beach Unified School Board on Jan. 14. Photo

Quevedo and Mentesoglu supported each other throughout development of their applications, and together lead RUHS’s Hack Club. Both were introduced to coding through a computer science class they took a year prior. Last summer, both also participated in internships with Boeing.

The Congressional App Challenge is a competition aimed at encouraging students to learn to code by creating their own applications. It is open to middle and high school students who either reside or attend school in California’s 33rd Congressional District. The first-place winner’s app is eligible to be featured in the U.S. Capitol Building and at House.gov. Additionally, the winner receives Amazon Web Services Credits and is invited to the #HouseOfCode DC Reception.

Quevedo took first place for his program, dot-buddy, a tool designed to help members of marching bands. Each performer within a marching band performance must precisely hit their checkpoints — or dots — for the whole band to create and maintain formations during performances. A dot-buddy user can find all of them in one place, as well as angles of travel and step-sizes, by inputting coordinates into Quevedo’s program. The app includes calculations and conversions for both high school and college fields, which are marked differently.

“It’s a problem that I had and wanted to solve. I’m in the marching band, and I wanted to combine my love of coding and my passion for music to make something that makes the experience more fun for people who are learning,” Quevedo said.

Mentesoglu’s iGov program was designed with civics in mind. While trying to determine what program he sought to create, Mentesoglu determined that the average citizen doesn’t really know much about their government.

His initial idea was to include fundamental documents of the federal government, including the Bill of Rights. But he decided instead to help citizens connect with their federal representatives, using phone location data to determine who their elected officials are. Users can then click on a representative’s name or portrait to find their email and telephone contact information.

The program takes advantage of a Google application programming interface, or API, to load data sets. The Google API is the medium between sets of data — elected positions, the officials in those positions, and those officials’ contact information — and Mentesoglu’s program.

“As a recovering Computer Science major, I am inspired by all these students who have committed themselves to create these innovative apps,” Congressman Lieu said. “Our office sees growth every year in the number of submissions. I am proud to represent a district that is the home to Silicon Beach, as well as SMC and UCLA, which emphasize the importance of STEM innovation and education.”

“The key to any app is making lives easier and determining the problem you have to solve,” Waller said, smiling. “Then, it’s getting other people to market it for you.”