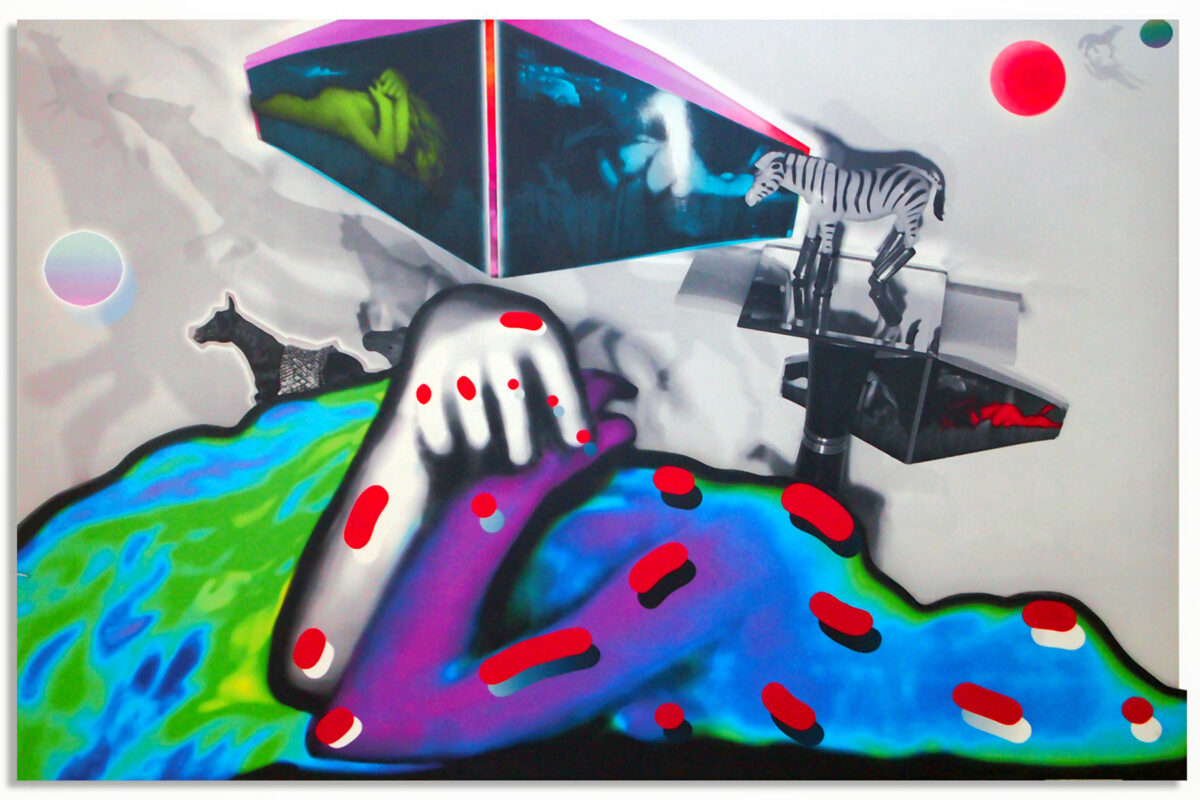 “Due Cavalli 3,” by John Dingler 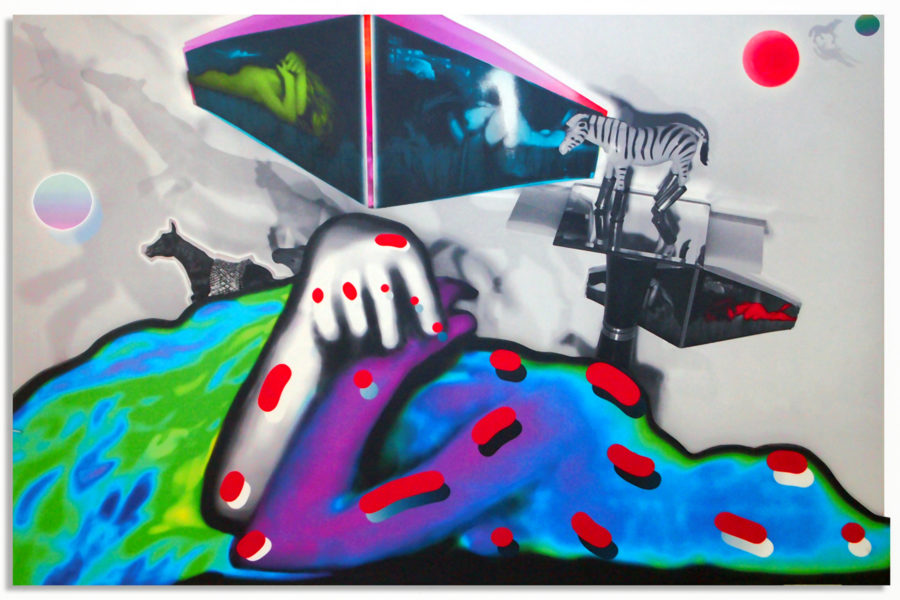 “Due Cavalli 3,” by John Dingler

Gallery in the Galleria

Just as Highway 101 brings together northern and southern California, so it is with “CA 101,” the annual arts exhibition founded four years ago in Redondo Beach.

Previous exhibitions have taken place at the AES Power Plant, the Palos Verdes Inn, and on the Redondo Beach Pier. This year it’s in the heart of the South Bay Galleria, near Macy’s, on the corner of Hawthorne and Artesia.

“CA 101” has become more prestigious during its short history. Now there are 141 artists from 69 different cities, with 240 works lined up for our viewing pleasure. 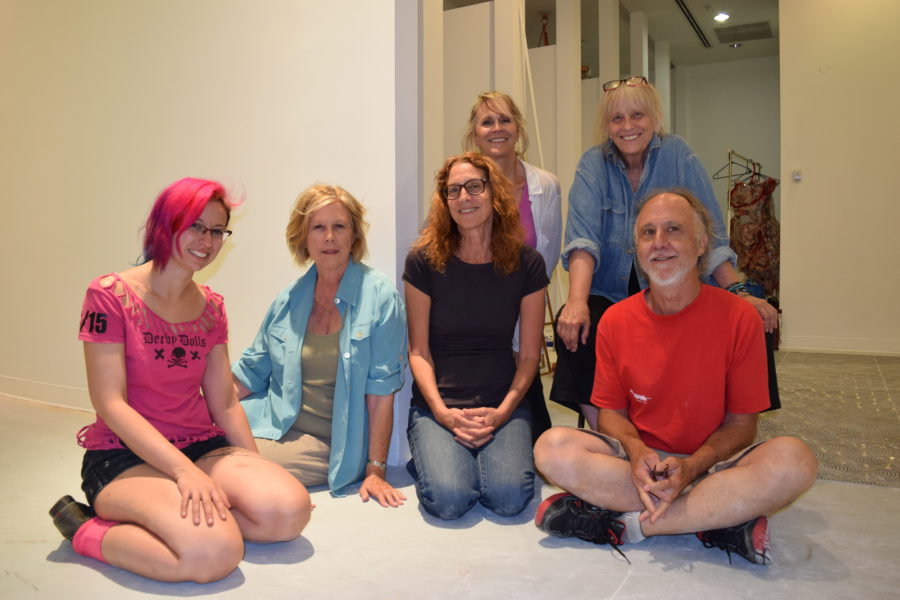 “An art exhibit like ‘CA 101’ takes a lot of hard work but the key element to the success of the show are the extraordinary artists,” says exhibition director Sandra Dyer Liljenwall.

Notes curator Nina Zak Laddon, “Curating ‘CA 101’ is a journey to a different land each year, a voyage full of discoveries, a quest for beauty and a study of our culture.”

Dyer Liljenwall and Zak Laddon are also the co-founders of “CA 101.” 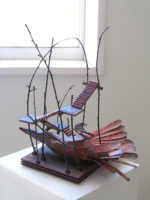 “Expecting to Fly,” by Denis Richardson

Although some people may prematurely conclude that the show features the same local artists that they’ve been seeing since forever, 136 of the works on display are by artists entirely new to “CA 101.” Many of them are at the top of their game, too. As Redondo Beach Mayor Steve Aspel points out, “‘CA 101’ brings artists from all over California to Redondo Beach. Our residents and visitors have the opportunity to see what contemporary artists are creating today.”

Should art bare its fangs?

As Nina Zak Laddon writes in the catalogue for the show, hundreds of materials were used to construct or were incorporated into the artworks. Likewise, there are dozens and dozens of styles and techniques, and so picking a few favorite pieces will be a true task for anyone going in with a scorecard.

We spoke briefly with three artists, and what they have in common is that their artwork has nothing in common with one another. And yet each of them does riveting work. 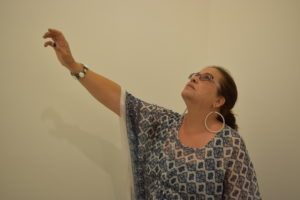 Holly Tempo is a visual artist and educator from Inglewood who teaches full time at Otis College of Art and Design. She’s constructed a piece called “Cardboard Revival.”

It’s site specific (and one of 24 installations this year), and Tempo says it’s also nomadic in that this is the third time, with variations, that she’s recreated it. “‘Cardboard Revival’ references a conflation of the issues of gentrification, wealth, design, and things that we associate with fat and then homelessness.”

Also referenced are the Tongva Indian tribe, “indigenous to this area, and probably here well before any of the rest of us were,” as well as “the geographic aspects of the area.”

The latter includes the former Moonstone Beach (in Redondo Beach). Tempo mentions that moonstones were used by artists and designers during the art deco era, and she points out the swirling silver and black tile patterns on the floor just outside the cubicle where “Cardboard Revival” is installed.

But this is art with a sociological kick.

“I also did research on the homelessness in the area.” Tempo says. “Here we are in a shopping mall, the center of commerce, the sign of having some money, and in doing research about homelessness specific to Redondo Beach I was surprised to find that, although it’s a relatively small number of homeless compared to, say, Los Angeles, it’s actually on the rise.

“For me, the cardboard is really a sign for that. So, it all becomes about taking these disparate parts and putting them together and creating a space… a space that is dazzling, beautiful, seductive, but also claustrophobic because there’s so much to experience when you go in there.”

Other artists are also addressing sociological or environmental issues, such as Cie Gumucio with “Melting Point (If You Can’t Stand the Heat,” which focuses on global warming. 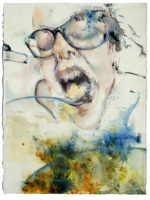 From the small amount I’ve glimpsed, a few of the artists in “CA 101” are touching on the meaningful or what they consider meaningful, such as female identity and body perception, especially in what seems to be a youth-centric society.

As for political art, does “CA 101” include any? We’ll see. There’s no better time for it, now that we have the two presumptive candidates for this nation’s highest office, both of whom are more reviled than admired. If an artist is only painting sunsets and beach scenes aren’t they running the risk of being irrelevant?

Coffee, tea, or the Moody Blues?

Carlos Chávez Córdova of Ventura has three works on view, including “Special Ops.”

“I did four paintings like this, same size, same sort of format,” Córdova says, “inspired by my wife who works with veterans. So it was taking imagery that was obviously militaristic, and putting it to a style all my own. Basically what I did was take pictures of warriors in their environment. This is a photograph I reworked of a special ops, operation.” 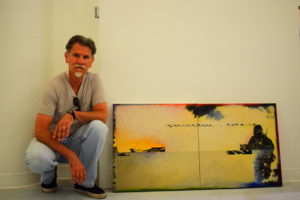 The image depicts a bare landscape with a heavily camouflaged soldier on the right.

However, there’s something vaguely legible towards the upper part of the canvas.

Does this say something?

“It does,” Córdova answers. “It’s taken from Psalm 54:3. I work-in a lot of scripture in my work. I typically will indicate some form of either the scripture itself or maybe just the title of the scripture.”

Does the viewer need to know what this refers to?

“Not really. They’re personal to me as opposed to what the imagery says. They’re not always connected.”

(FYI, Psalm 54:3 begins: Arrogant foes are attacking me; ruthless people are trying to kill me–people without regard for God.”) 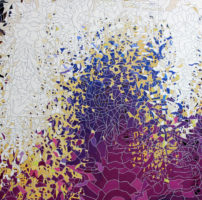 One will notice that the canvas is actually two square canvases placed side-by-side for form one rectangular canvas. Why did he do that?

Córdova laughs. “It was practical. I didn’t have any large canvases; all I had were small canvases so I put them together and it worked. I liked the idea, and so I went with it.”

“Special Ops” is part of a series that Córdova wrapped up about a year ago, and although he’s done three or four other series since, he may revisit it.

“My love for the military and that kind of imagery is still there with me, so I may come back to it, maybe in a different way.”

Córdova is also showing two smaller paintings from a series he made when he was living in New York City, or Hell’s Kitchen, to be exact. One work is called “54th and Ninth,” an area where he resided, and the other is “Dancing in the Street.” 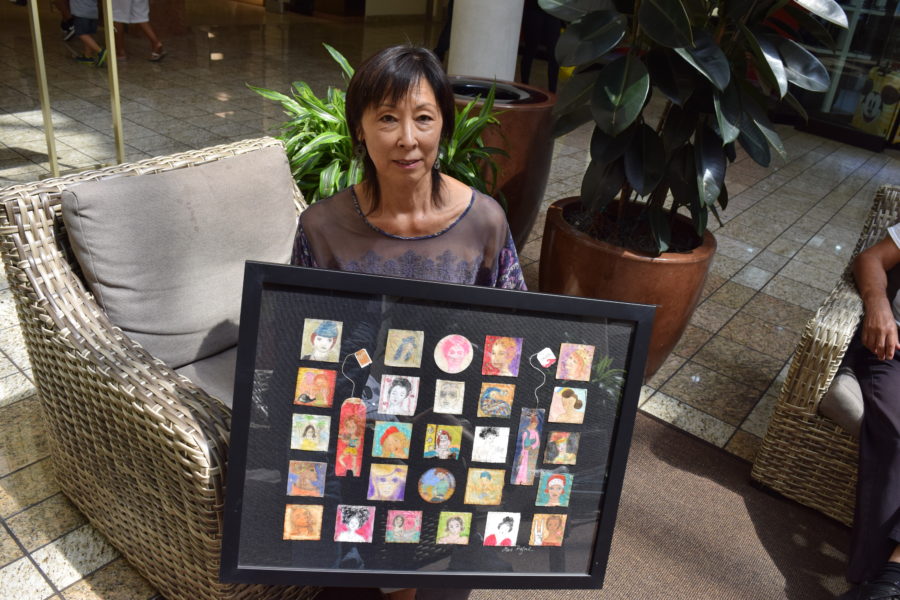 Irene Rafael with some of her painted tea bags. Photo

Irene Rafael has been on a roll since early this year when she saw a painting on a tea bag. The Palos Verdes resident recalled that as a young girl her mother and Japanese grandmother would sit and talk while sipping tea from handleless teacups. 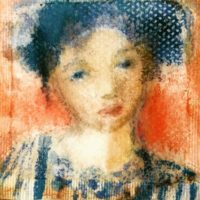 One of many, many painted tea bags, by Irene Rafael

And so Rafael picked up a brush and embarked on an adventure.

“I decided to paint a tea bag a day for a year,” she says. “I love the idea of creating art on an everyday object, and painting on tea bags connected me to my Japanese heritage, the archetypal tea ceremonies of Japan, and my own family.”

As I write this, she’s painted about 165 tea bags.

Most of these miniature works depict female faces, but not all.

“I have painted imaginary faces, faces from the past, faces of animals and fictional characters, and faces influenced by masters (of art).”

It’s all part of what we could call Rafael’s morning ritual. She rises before dawn, before the sun itself has gotten out of bed, makes a cup of tea and goes to her upstairs 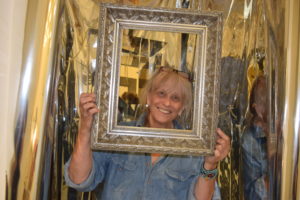 Karrie Ross, whose installation, “The Nature of Things,” is about how we perceive the world, with its facets and its distortions, as we move through it. Photo

studio with its view over green hills.

“After the tea is made, the bag is laid flat and dried, then a small slit is made and the tea is emptied,” Rafael says. “Most of the bags are smaller than 3”x3.” I look at the tea bag in all directions, front and back for stains or marks. What am I looking for? A face or inspiration.

“The tea bags are treated like tiny canvases. Because I am an experimental mixed-media artist, I have used multiple materials, including watercolors, acrylics, pencil sketches, pastels, collage, and graphite.”

Think about all that the next time you’re brewing a cup of tea.