"The Sleepers," by Gus Harper 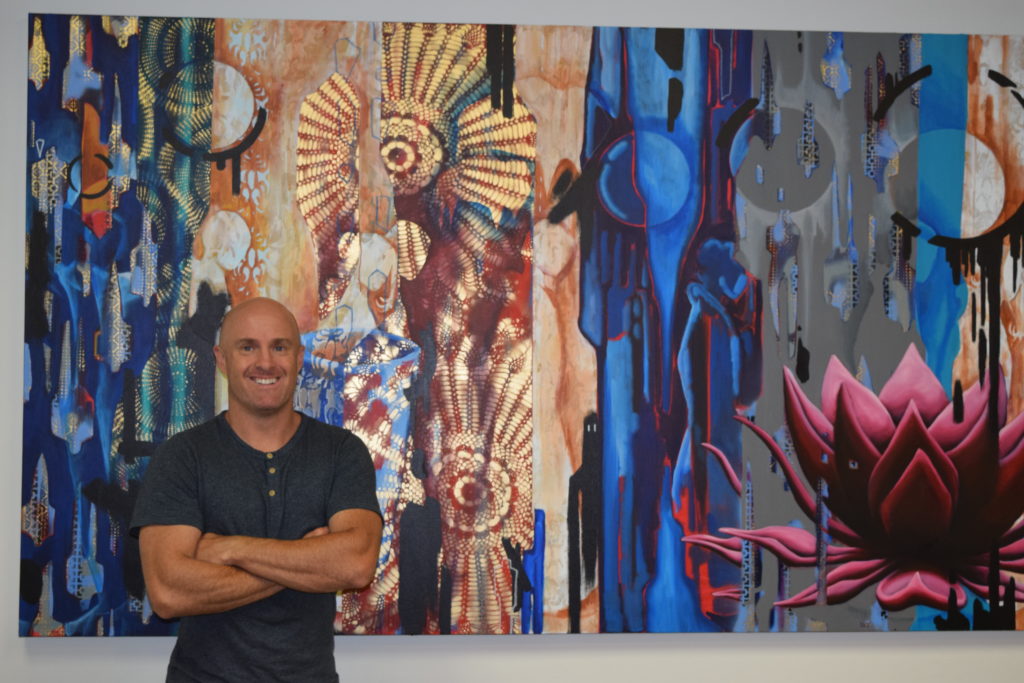 I don’t want to sound like a shill for the Friends of Redondo Beach Art, but the annual “CA 101” shows really do seem to get better year after year. And why shouldn’t they? For this one, entitled “It Takes a Village” (it’s being held in Redondo’s Riviera Village), there were 900 submissions from 55 cities up and down the state. Beginning tomorrow evening and on view through Sunday, June 11, we’ll get to savor the work of 137 artists. And, as before, the exhibition director is Sandra Dyer Liljenwall and the curator/juror is Nina Zak Laddon.

Without sacrificing quality, “CA 101” has managed to bring us both new and unfamiliar artists, old friends and new friends. I spoke with two of the latter, both showing locally for the first time. 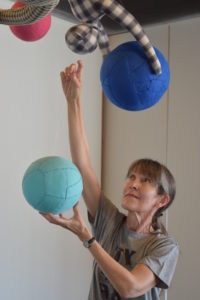 Samuelle Richardson emerged from a background in fashion, which included knit design, pattern-making, color correction, and print design. She then studied life drawing and painting, afterwards circling back and combining all of these influences into fabricated figures. Some of them look like creative variations of childhood “stuffed animals,” but on closer examination you’ll see that they’re really in a league of their own. Now, there’s one series, out of several, that stands out, and it’s called “Earth Angels.” Essentially, it’s a giant mobile, kind of like if FAO Schwarz had collaborated with Paul Klee and maybe Alexander Calder. But let’s have Richardson explain it herself:

“Several years ago I made some figures in this type of construction as stationary figures. The idea (then) came to me that they would be more interesting suspended.”

She also thought of them as a group, which led to there being five figures, and because of the armature within each that gives them shape and form there is a sense of this ensemble being borne aloft and floating.

“I positioned each figure to suspend as if it’s in a turn, a somersault. Each figure has a different position in the somersault to give the impression of turning.” The result is a sort of aerial ballet.

However, Richardson adds, “when they were finished there was something missing, and I realized what was needed was another shape, like a globe.” Contemplating what she had, or rather didn’t yet have, she saw “that it made sense to place a globe in between each hand, in their hands; and that gave me the opportunity to enhance the color combination.” 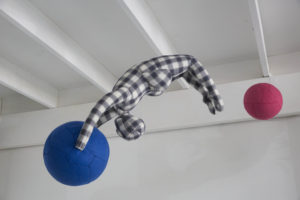 One of Samuelle Richardson’s aerial acrobats

(For this writer, what comes to mind are Picasso’s variations on his “The Family of Saltimbanques,” and the lure of the circus as depicted by Edgar Degas and Georges Seurat.)

The primary effect is in the sculptural arrangement of color and shapes as well as the visual texture of the fabric. This varies as the viewer changes position, or as the work gradually rotates due to shifts in the air current. But there’s more:

“When they were finished I didn’t really have a narrative. As I studied them I began to have a thought about planets, globes as planets. We talk about preserving the planet, and wouldn’t it be interesting if unseen, caring hands could carry that planet to a safe place?

“It’s something I tend to do,” Richardson goes on to explain, “if I have construction workers coming around the space I’m living in. I pick up the things that are most important to me and I take them out of harm’s way. I see myself doing that; I take things out of harm’s way.

“Our planet is of course fragile and endangered, and wouldn’t it be interesting if unseen hands could carry it? And that’s the narrative.” 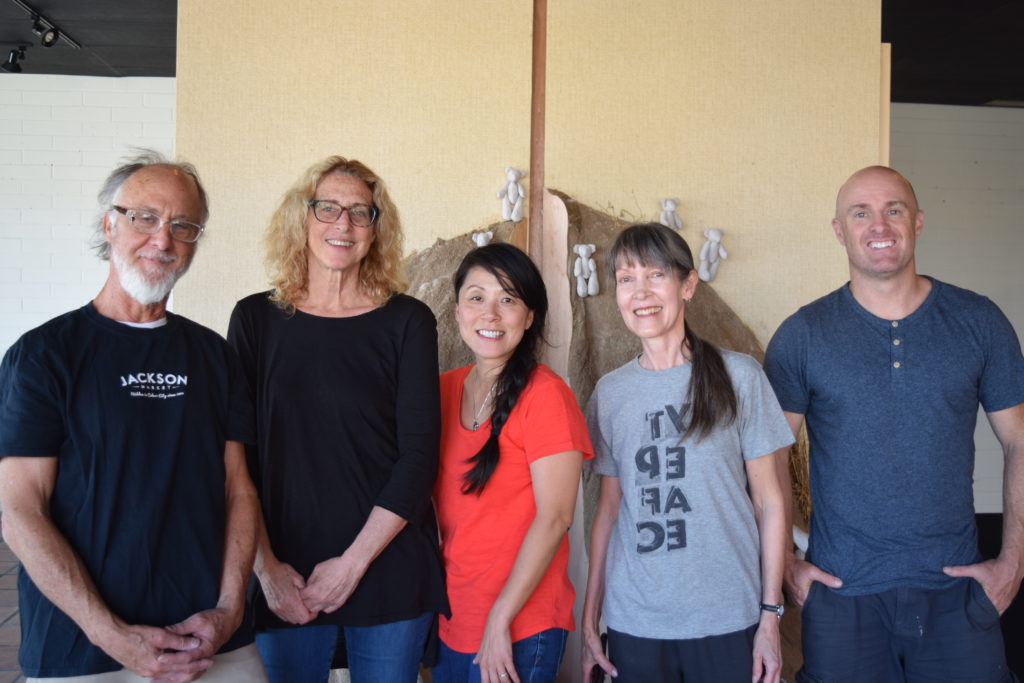 Gus Harper has two large paintings in the show, one of which hangs over the counter at the rear of the gallery, and the other is to our immediate right as we enter through the front door. He also has a pair of studios, one at Santa Monica Airport where most of his work is created, the other in Culver City, which seems to be more of a showroom and a place to hold events. Additionally, those who live in Santa Monica may be aware of his “The Minor Identity Crisis Mural,” which can be seen at 34th St. and Pico. 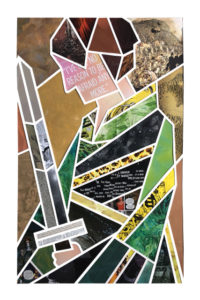 “Nevertheless She Persisted,” by Isaac Brynjegard-Bialik

Harper spends a few minutes discussing “Sacred Journey,” which was inspired by a recent trip to Asia and, in particular, Nepal. It is a lush organic work that has a richness of deep and darker tones. The somber colors pull us in and hold our attention.

“The columns represent chapters in our lives,” he says, “and the figures moving throughout” – monks and monkettes – “represent us on kind of a spiritual journey. At the end there’s a lotus which is a symbol of spiritual rebirth and purity. My work is symbolism-heavy, and you can see lots of animals and different shapes in them. Maybe the circle represents the passage of time.” He pauses. “Hopefully it comes across as a celebratory image.”

Because the figures are seen in profile and facing to the right, and because the painting seems to have several partitions, one is tempted to read the picture from left to right as if it’s been unscrolled, as well as to try and take it all in at once. Harper seems to agree with this assessment.

Although it’s not on view here, there’s a pendant, a sister image to “Spiritual Journey.”

Some artists would be hesitant about tackling a large canvas without first carefully delineating where all the elements are to be placed, but Harper, because he’s comfortable with large-scale works, figured it all out in his mind first and then jumped right in. Sure, there was a bit of stop-and-go, such as deciding to uproot the lotus and push it a few points to the right, but Harper seems to have an innate or else highly cultivated sense of balance, and the picture feels situated just right. It’s bound to receive plenty of positive remarks.

“The Sleepers,” by Gus Harper

Then there’s “The Sleepers,” which because of the lilies that gently arc over the reclining figures, is somewhat reminiscent of Diego Rivera’s use of the same flower, in such canvases as “Vendor of Calla Lilies” and “Nude with Calla Lilies.” 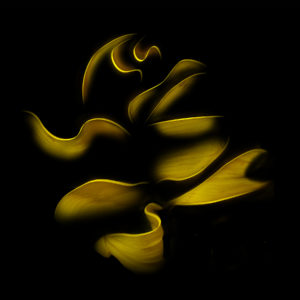 On one level, Harper points out, it’s just two people under a blanket, but on another level (remember what he said about his work being “symbolism-heavy”) he suggests that the picture may be about our guardian angels. As soon as he says this, I think back to Samuelle Richardson’s “Earth Angels,” and begin to wonder if in these uncertain times there’s a need, unspoken or otherwise, for some sort of Mother or Father figure to come and watch over us and our planet. After all, how many people respect or have confidence in the politicians tasked with running our country?

Because one of the sleeping figures has its eyes open, there’s certainly that sense of one person slumbering (safely, feeling protected) while another is awake and watchful. Some people, however, have opined that these two figures are really just one figure, and to to get by in life we need to be both restful and vigilant. Again, as with “Spiritual Journey,” the viewer is invited to look deep into the work, and then to formulate his or her own interpretation.

“I don’t want to over-explain anything,” Harper adds. “If somebody asks me what I was thinking about I’ll tell them, but I don’t want to take away somebody else’s opportunity to look at it and have their own reaction.” 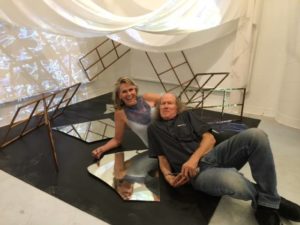 There’s always excitement at CA 101. At last year’s event Cecil and Marge from Altadena fell through the skylight while dancing on the roof.

The picture may also stir memories of works by Georgia O’Keeffe blended with post-impressionist Henri Rousseau. Be that as it may, there’s strength here, a confidence in the execution and also a gentleness or sensitivity.

“This is one of my more well-liked pieces,” Harper admits. “The way the flowers stand out, I think it makes it jubilant.”