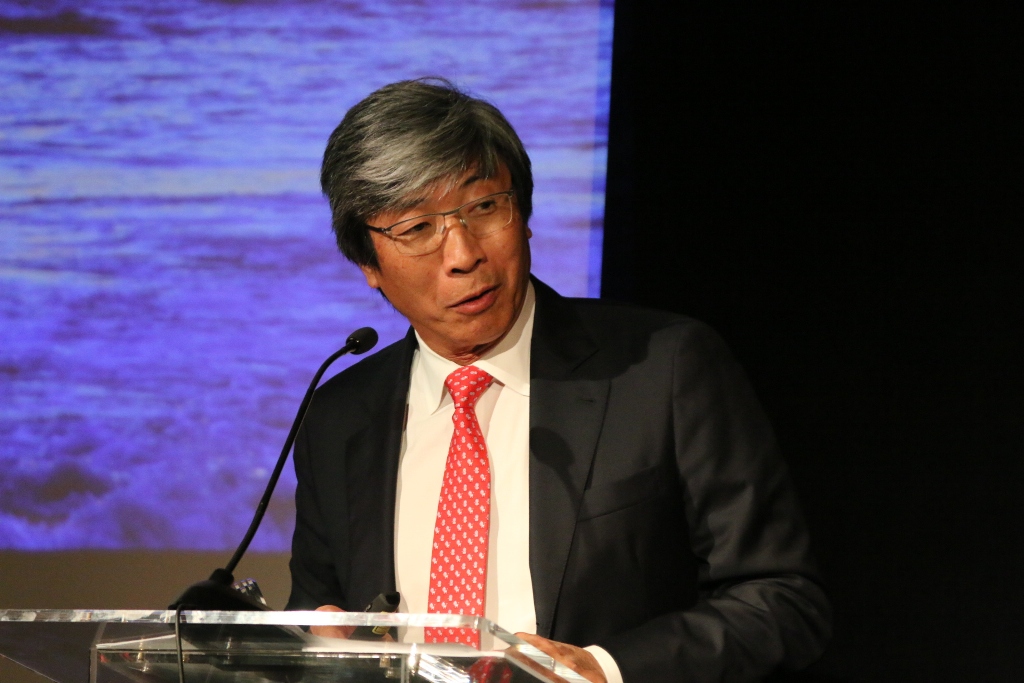 “El Segundo may become the center of biotechnology in the U.S., if not the world,” portended  2017 El Segundo Champion of Business honoree Dr. Patrick Soon-Shiong.

“Every individual is born with cells that kill cancer. We have discovered that cell, what we call natural killer cells. Imagine if we could target natural killer cells to track down and literally explode cancer in the pancreas, brain or any other cancer target. This is not a pipe dream,” he said.

“Those are not basketballs,” he said of the killer cells, eliciting laughter from the audience. Soon-Shiong is part owner of the Los Angeles Lakers, which recently opened a training center and offices in El Segundo, near the newly opened Chan Soon-Shiong Institute for Medicine. The evening’s emcee was Laker president Tim Harris.

In explaining how natural killer cells work, he suggested that current cancer treatments are akin to bloodletting.

“We are challenging everything done over the past 40 years of giving patients high dose chemotherapy. In essence what we’ve been doing, inadvertently, is wiping out every natural killer cell in every cancer patient.”

“Clearly, we face difficult challenges. We need to re educate the entire of cadre doctors, scientists, nurses and researchers.”

Additionally, he said, “We need the manufacturing capacity to produce billions of billions of natural killer cells. It would be unconscionable to releases this information and not have the capacity to treat every cancer patient.”

Soon Shiong said the natural killer cells he is manufacturing will be administered “like a flu shot.”

“I’ve always believed that chemotherapy doesn’t need to be toxic and cancer needn’t be fatal,’ he said.

Soon Shiong’s bold promise to cure cancer is backed by a history of medical achievements that include over 100 published scientific papers and over 200 patents. In 2005, he received FDA approval for the cancer treatment drug Abraxane, which he developed. In 2010, he sold the company that manufactured the drug for $3.8 billion. Last year, Los Angeles Business Journal ranked him number 1 on its wealthiest Angelenos list, with an estimated worth of $15.4 billion. (Fellow South African and neighboring South Bay business owner Elon Musk was second on the list, with an estimated worth of $13.3 billion). In 2016, Soon Shiong took public his biotech start-up NantWorks. The company now occupies six sites, including the former Raytheon and Directv buildings, spread across 23 acres of El Segundo,

He opened the Chan Soon-Shiong Institute for Medicine on Mariposa Street, just east of Sepulveda Boulevard, in July

“In this building, we will be conducting trials to prove the hypothesis that we can treat cancer patients without high doses of chemotherapy. This institute will be addressing all cancers types at all stages of the disease. I see the institute as an imaging center tied to transfusion center, tied to state of the art radiation center,” he said.

“The hope is real. We can lead the nation,” he said.