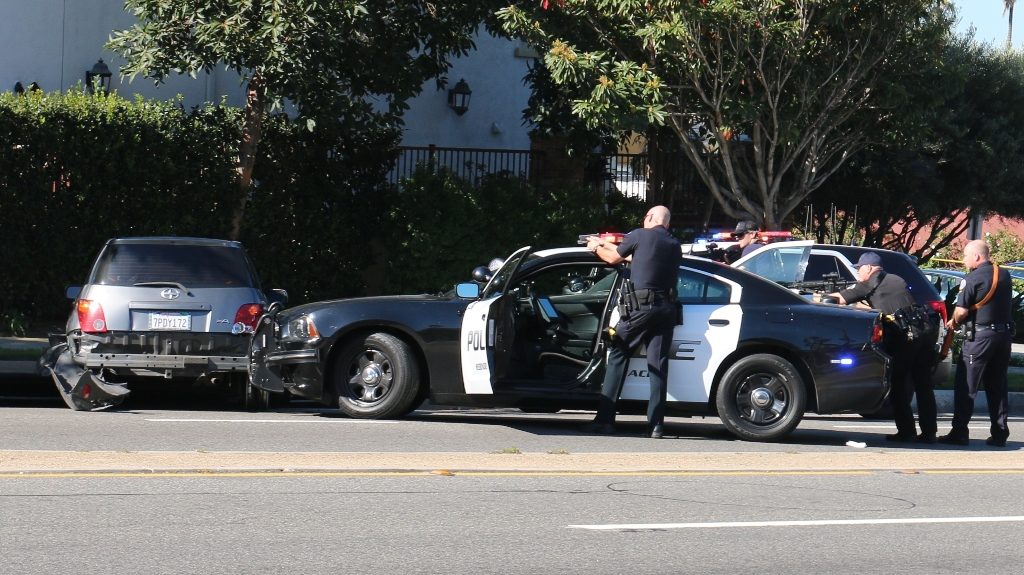 Redondo Police kept weapons pointed at the suspect for over two hours while he ignored orders to exit his vehicle. Photos

Redondo Beach Police officers kept their weapons on the carjacking suspect’s car for over two hours while the suspect ignored orders issued over a police megaphone to exit the car. Photo

Pennywise guitarist Fletcher Dragge was driving his black Ford F 250 pickup south on Pacific Coast Highway in Redondo Beach Wednesday morning when he saw a gray Scion in his rear view mirror, being  followed by police cars with flashing lights. The suspected carjacker had led police on a slow speed chase that began in South Central Los Angeles, proceeded west to the ocean in El Segundo, then south on Highland through Manhattan Beach to Hermosa Beach, east on Longfellow to Valley-Ardmore, south and then north again, then west again to Harbor Drive in Redondo Beach, then south on Catalina Avenue and east on Beryl to Pacific Coast Highway, where he met up with Dragge.

“I thought I should get out of the way, so I crossed the double yellow to make a U-turn. But my truck is so long I got stuck, blocking the two northbound lanes,” Dragge said. 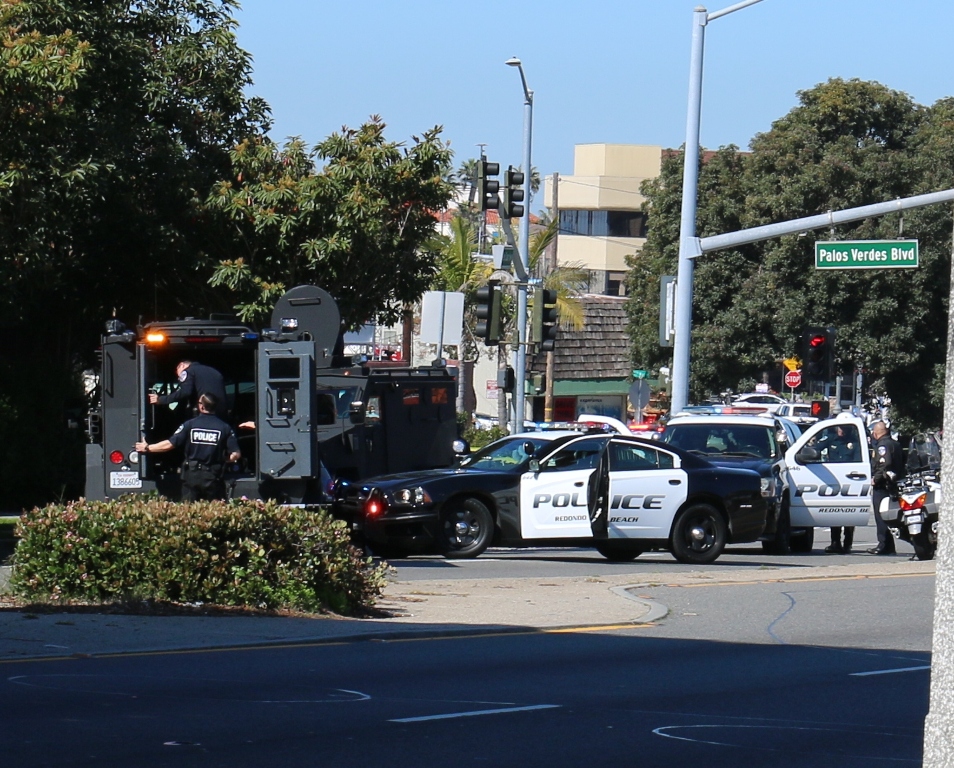 As Dragge sat at a stop, the Scion spun into his lane and came to a rest 10 feet away, he said.

A police squad car had apparently tapped the rear end of the Scion, in a maneuver known as a PIT (Precision Immobilization Technique). Earlier during the chase, at Herondo Street and Hermosa Avenue,  Hermosa Beach police had flattened one of the  Scion’s rear tire with a tack strip.

“It looked like he was reaching for the driver side door handle and I thought for a moment he was coming for my truck. But if he was, he changed his mind when we made eye contact,” Dragge said. Dragge described the Scion driver as a small, Hispanic male in his early 20s, with a shaved head. Dragge is 6-foot-5, 300 pounds. 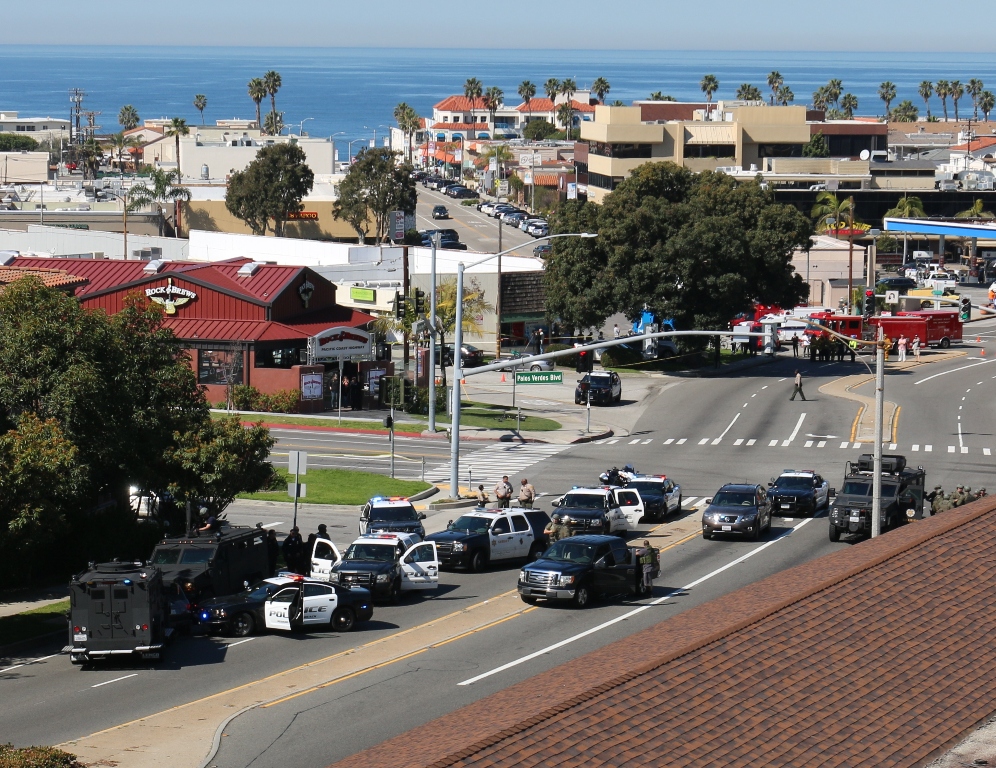 The driver backed up, then resumed driving south on Pacific Coast Highway until he reached Palos Verdes Boulevard. There, a Redondo Beach police car tapped his rear end again, this time sending the Scion into the curb, where it stopped.

At about 11:15 a.m., after a two hour stand-off, the suspect, identified as Carlos Mercado, 27, emerged from the Scion with his shirt off and hands over his head. 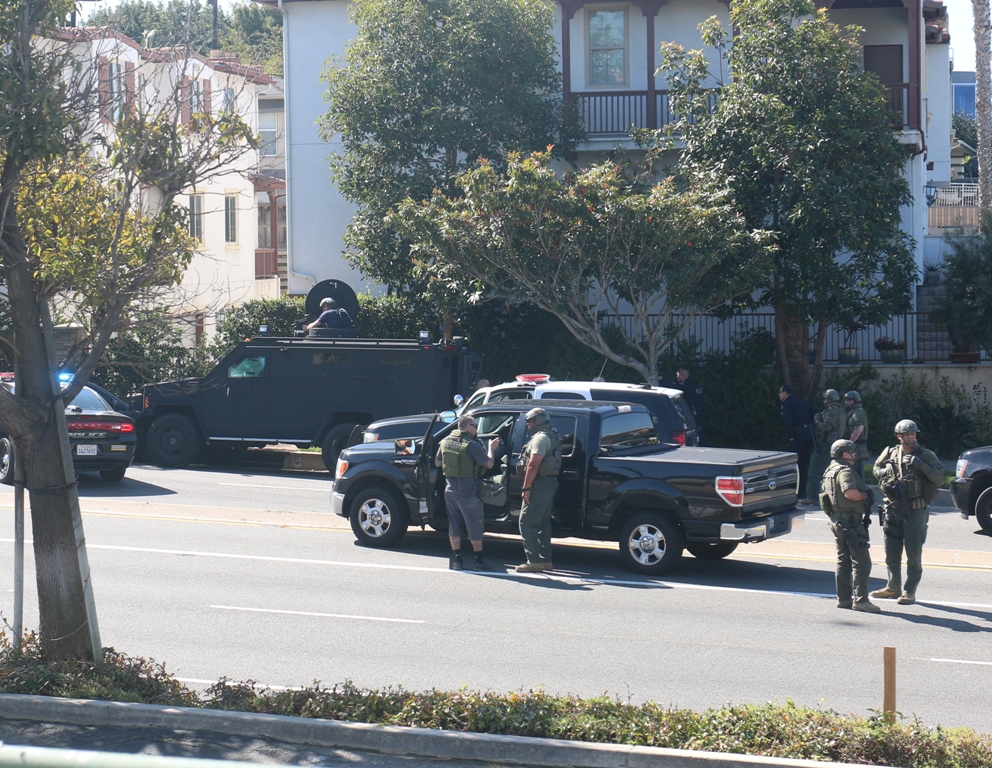 A downtown Hermosa Beach business owner saw on the live television coverage that the carjacking suspect was driving down Gould Avenue toward the ocean and correctly guessed that the suspect would soon be driving south on Hermosa Avenue. So the business owner jumped in his car behind his shop and parked it across one of Hermosa Avenue’s two southbound lanes. Then he convinced a passing Mercedes driver to block the second southbound lane. The carjacking suspect evaded the blockade by swerving into a northbound lane. 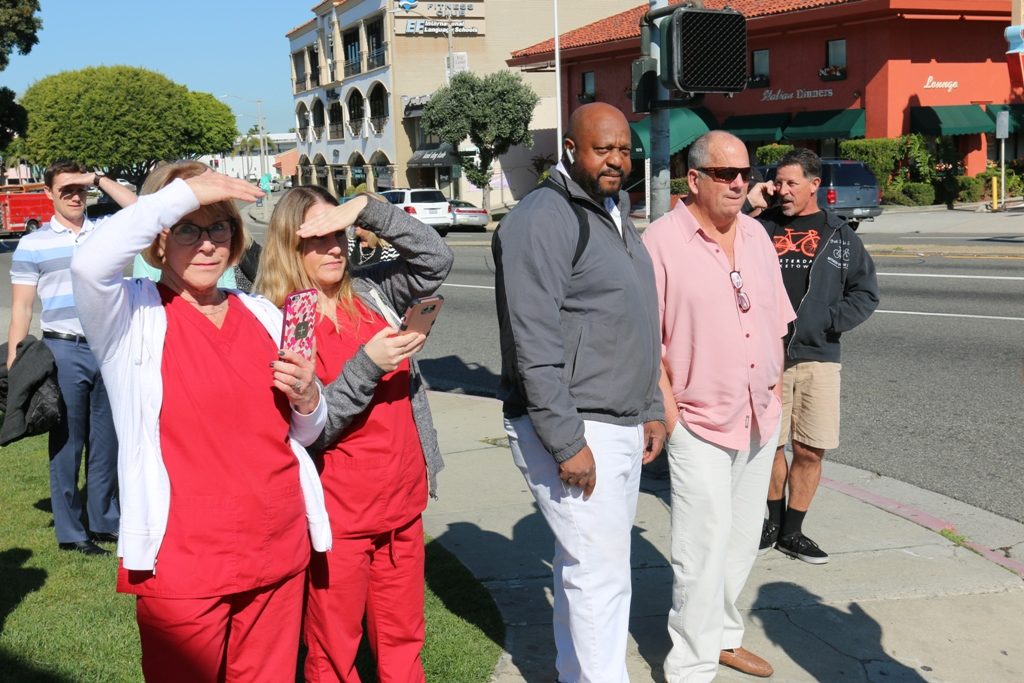 Redondo Beach Mayor Steve Aspel (right) was among the crowd that assembled on the edge of Riviera Village, where the car chase ended.

“I was thinking about that mother and child killed a few weeks ago during a car chase. And I’m ready for a new car,” said the business owner, who asked not to be identified. ER