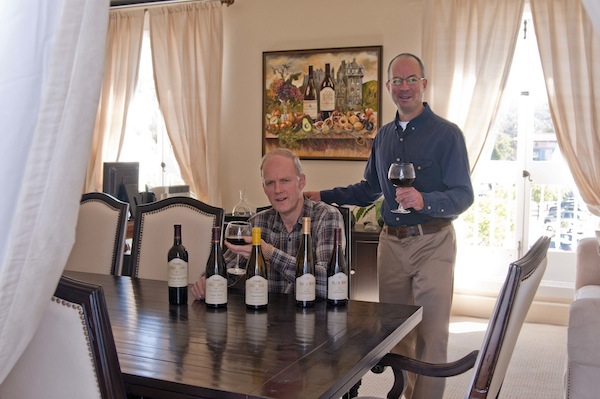 There are a few people who can truly say that they have succeeded beyond their wildest dreams. Founder Jimmy Wales of Wikipedia once publicly hoped that his creation might have thousands of entries – it now has millions. To Wales and the entrepreneurs like him, add Greg Popovich of Castle Rock Wines. When Peninsula People’s David Hunt interviewed Greg in 1999, he was selling 15,000 cases of wine a year and expected that he might someday sell as many as 100,000.

“We want people to think of Castle Rock as the $10 bottle of wine with the quality of a bottle costing two or three times as much.”

Today his goal is a million cases, and he is not far from achieving it. He and partner Chris Noble run an industry giant from a small suite of offices in the Malaga Cove Plaza. The location sometimes confuses wine industry executives who not only can’t imagine having offices far from where the wines are made, but can’t see why anybody would want to. Greg says that it often takes a visit for them to understand his decision.

“Sometimes we hear from a distributor who will be in town and wants to visit, and we take them out to Lunada Bay for lunch. Then they say, “Now we know why you’re here.” With the fax machine and email, I don’t need to be in Northern California to run a wine company. I love the area, so I’m taking advantage of technology to live where I like.”

“We get people knocking on the door once in a while looking for our tasting room or wanting to hold a wedding here – we hate to disappoint them,” offered Chris Noble. “The winemaking expertise is up north, the commercial, marketing, and financial expertise is here. “

Though there are plenty of grapevines on the Palos Verdes Peninsula, the closest vines with fruit that might end up in a Castle Rock bottle are somewhere north of Santa Barbara. The vineyards Castle Rock uses extend across a surprising range, as Chris explained.

“We have our own winemaker, Joe Briggs, who is based in Northern California. We make wine in Oregon, Washington, at the Coppola facility on the Central Coast, and in Napa. Our winemaker oversees that whole process, and he has made every case of Castle Rock wine going back to 1994. It gets tense as it’s close to picking day at each vineyard. The growers just want you pick them so they get paid, but we don’t want them until they’ll make really nice wine.”

Asked whether he and Greg have a say in the technical decisions about winemaking, Chris laughed. “Nobody from this office is rolling up their sleeves, checking grapes, and trudging around in the mud to see if a vineyard will work. I’ve done it a couple of times, and that’s plenty. Joe makes the assessments of whether it’s a vineyard we want to buy fruit from; we negotiate the contracts here.”

Greg hastened to explain that though he doesn’t spend much time in actual vineyards either, it is not from a lack of interest in wine.

“We haven’t taken all the romance out of the business. Chris and I are very passionate about wine, but we approach everything with a very businesslike attitude. We don’t own our own facility. We lease production space from people who have excess capacity, so we’re a very low overhead company. There’s no one our size who has this business model. Most people our size have between 60 and 90 employees, and we have 11. This is not a lifestyle choice, like those people who have $50 million and decide to get into the wine business.”

Those who do get into the business as a hobby typically want to make boutique wines that sell at high prices, which is the opposite of the Castle Rock concept.

“We want people to think of Castle Rock as the $10 bottle of wine with the quality of a bottle costing two or three times as much. That’s the mindset we’ve tried to get our customers into, and it has worked. People who have tried one of our wines and liked it are comfortable with moving from one appellation to another. Most of our competitors at our price point are generic California appellations.”

One place that they don’t make wine for Castle Rock is the town of Castle Rock, though there is a place by that name in Colorado, as well as a famous landmark in Scotland. Greg revealed that the winery’s name has an unlikely origin.

“Steven King in all his books uses the imaginary town of Castle Rock… I had seen and heard the name several times. I worked for a winery called La Crema, and people said the name all sorts of different ways, if they could remember it at all. Then I worked for a winery called Lost Hills, and people kept asking if we’d found them yet, all the same jokes. When I developed my own brand I wanted something easy and memorable. I went through name after name, and settled on Castle Rock because I liked it. It has proven to be an asset, and we’re very proud of it.”

Though Greg has expertise in marketing and an MBA to prove it, he says that the name wasn’t a particularly calculated idea.

“We’re not trying to be trendy. The name is straightforward, the packaging is simple. We’re not trying to be a critter brand, something with a name like blue cow or pink dog, something that will be around for a year or so and then change packaging or go out of business. We want something that can be here for a 100 years and be rooted in honesty. I think there are a lot of influences that will combine to make these trendy brands fail in the future.“

When Chris was asked if he has a marketing degree, Greg answers for him.

“I would wager that Chris is the only person in the California wine industry who has a Masters in mathematics from Cambridge.”

Chris shook his head when asked about the value of his degree in his chosen profession.

“My field was quantum mechanics, which somehow hasn’t been particularly useful in winemaking. As they say, the rigorous training does carry over to other things, giving a base in critical thinking. My expertise is not in wine either. I was with Atlantic Richfield, and I used to run the AM/PM operation on the West Coast.

Greg and I were friends, and we used to work out at the same karate studio. I was looking for a job, and he was talking about how fast his business was growing and how he needed help to run it. My skills were a good fit for what he needed, so I started the next week.”

Chris has been with Castle Rock for nine years, continuing what was originally envisioned as a temporary stay in California.

“I grew up in London, and moved here in ’94, originally for two years. My wife and I had two kids, and we thought it would be good to give them two years in California and then go back to England. We ended up staying and becoming American citizens. Though I go back home once or twice a year, this is really my home and I plan on staying.”

“Chris lives in Rolling Hills Estates, I’m in Palos Verdes Estates, so we are peninsula people,” Greg interjected. “Chris is very involved in Harbor Interfaith over in San Pedro, and I’m on the Board of Directors of Lifesteps, which helps people in affordable housing complexes. We also work with the Cancer Support Community and other organizations. We get calls almost every day, and we give where we can. It’s personal for us to connect with this community. I have an eight year old son at Peninsula Heritage, and my fiancée has a son at Rancho Vista.”

At the mention of a fiancée, the natural question arose – what wine will be served at their wedding?

“It will only take you one guess,” answered Popovich after he stopped laughing. “I’m very loyal to my own brand. I like many wines, but I’m not a huge collector. I don’t have the discipline to have a large wine cellar, because after a glass of wine with friends, I’d end up sharing a bottle I was planning on saving for 10 years. Not only that, I really enjoy drinking Castle Rock wines. My fiancée won’t drink anything else. I had something else out and she asked, “Why are you spending money for this when we could be drinking Castle Rock?”