Celebrity chefs at the Strand House 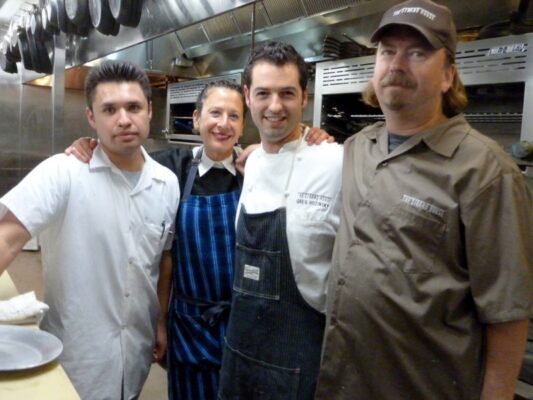 Two of the most famous chefs in America were in the kitchen at the Strand House Monday as part of their guest chef series – and in the kitchen doesn’t mean just watching or giving orders. Nancy Silverton and Matt Molina were right in the thick of things, slicing, saucing, and cooking with a team that included Strand House chefs Greg Hozinsky and Neal Fraser.

Silverton, famous for her work at La Brea Bakery, Campanile Restaurant, and for the influential books she wrote on bread and baking, and Molina, a James Beard Award winner last year, run the kitchen at Osteria Mozza in Los Angeles. They 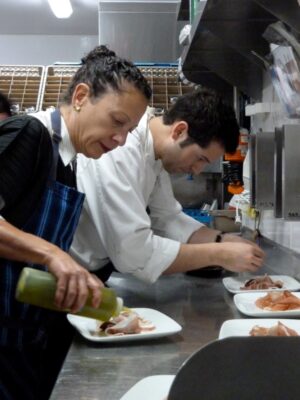 brought a menu that wouldn’t have been out of place at that restaurant, including braised leeks vinaigrette with fresh burrata cheese, orecchiette pasta with fennel sausage and swiss chard, and a porcini mushroom rubbed ribeye steak with white beans. Winemaker K.R. Rombauer III paired wines with each of the five courses, finishing with a late harvest Chardonnay to complement the butterscotch and whiskey custard with rosemary-pinenut cookies.

Silverton signed copies of her books and chatted with attendees, happily explaining the traditional influences in her cooking, while Rombauer strolled from table to table to explain the art of wine pairing. It was an assemblage of culinary talent, a mark of how the South Bay dining scene, once regarded as provincial, now receives the attention of top chefs. One example of this attention opened last week – Circa, featuring chef Octavio Becerra, well known for his work at Patina and Palate Food & Wine. Becerra’s offerings at Circa include salmon cured with Armenian spices, Chinese-style lamb dumplings, risotto and cheese fritters, and whole fried sea bass.