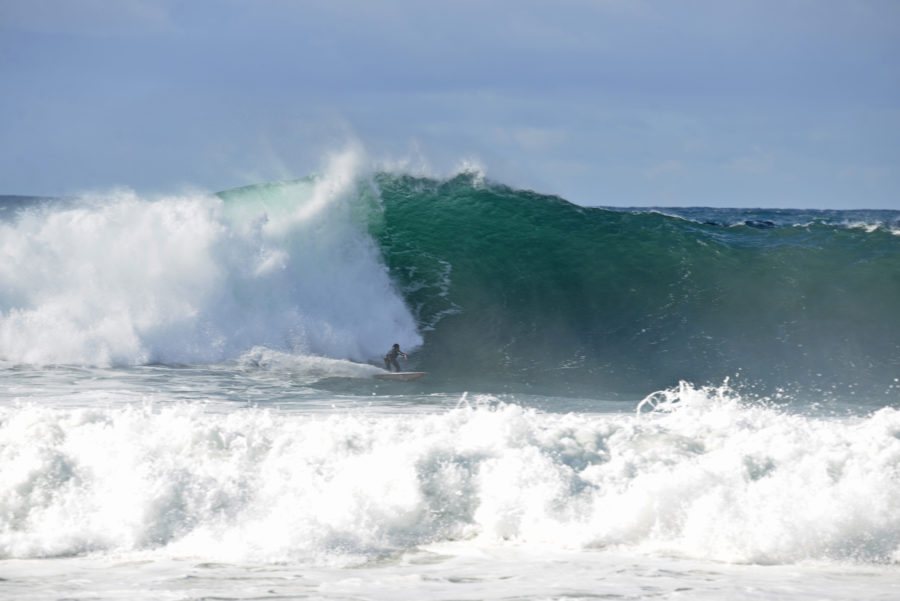 Angelo Luhrsen on his Big Wave Challenge Award winning wave at the Redondo Breakwall on January 7. Photo by Charles Scholz.

Angelo Luhrsen and his number one surf bro and fellow big wave charger Connor Beatty could not decide whether to paddle out or not. The Redondo Breakwall was macking. The other Breakwall locals were sitting on the wall, watching. Spectators were gathered on the beach next to the Chart House, drawn by the Thursday, January 7 forecast for the biggest Southern California swell in over a decade.

Their surf check was supposed to be a quick one. After riding mostly closed out Torrance Beach earlier that morning, Luhrsen and Beatty had stopped at the Breakwall with their big guns,  enroute north, to a better-known bombora that handles large swells. 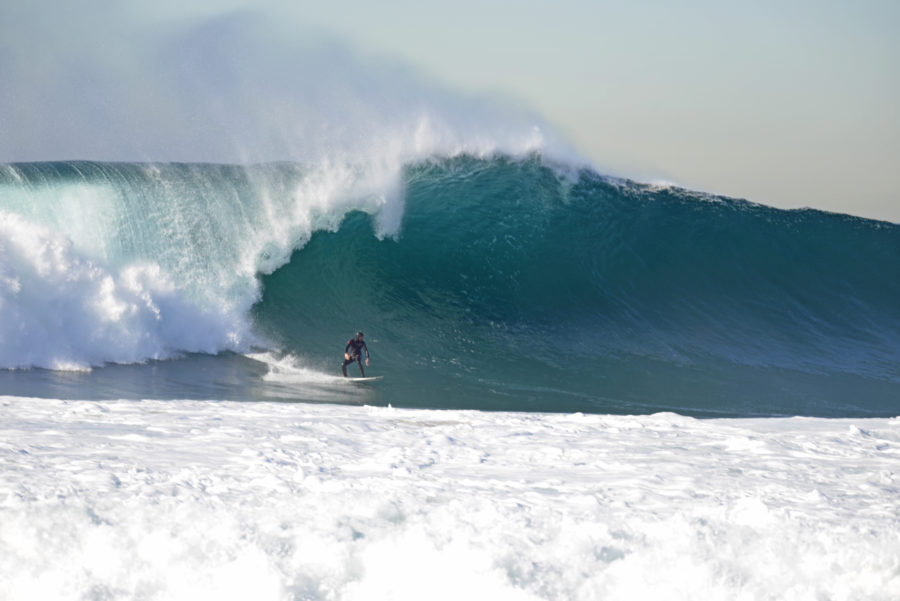 “Breakwall was big and ugly but after seeing one rideable wave, we were on it,” Luhrsen said.

The decision would earn Luhrsen the South Bay Boardriders 2015-16 Big Wave Challenge award, which was accompanied by a Pat Reardon big wave gun and $3,000.

In large Breakwater surf,  the whitewater is too powerful to paddle out through from the beach. So surfers walk out, roughly 200 yards, along a walkway at the top of the Breakwater. Then, when they sense a lull between swells, they climb down the Breakwater boulders and jump into the water.

Later that morning, veteran Breakwall surfer Doug “Doc” Scheller would be knocked down on the rocks by a wave and suffer  a broken shoulder, a broken arm and internal bruising. He said he would have died had Luhrsen’s dad Michael and fellow surfer Jeremy Griffin not pulled him from the cave in the rocks that he had been knocked into.

Luhrsen and Beatty had better luck getting off the rocks. But then their luck ran out. A giant set rolled through before they could paddle past the impact zone. 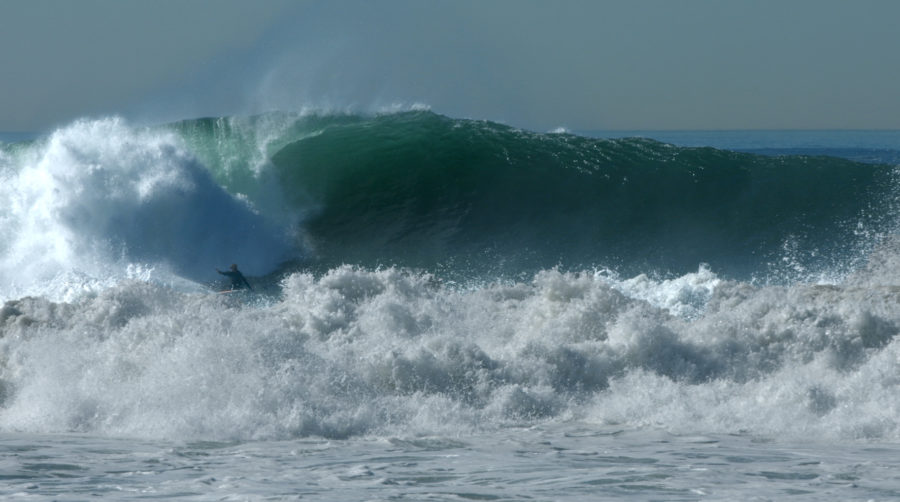 “We got smoked.” Luhrsen said. “The set took us all the way back to the beach. I came up gasping for air and saw the whitewash was dragging us back to shore like we were being towed behind a car,” Luhrsen

“We had our little walk of shame on the beach,” he added.

After a pep talk and some suggestions on where to jump off the rocks from Luhrsen’s dad, the two walked back out along the breakwall and during a rare lull between sets, made it out to the lineup spot.

“It was the furthest out that I have ever sat at the Breakwall,” Luhrsen said. “I was way past the end of the breakwall and could see all of Palos Verdes.”

Luhrsen was just getting comfortable on his Pat Ryan shaped, 7-foot-2 ET gun, when another macking set came through. Cameras on the beach began clicking. 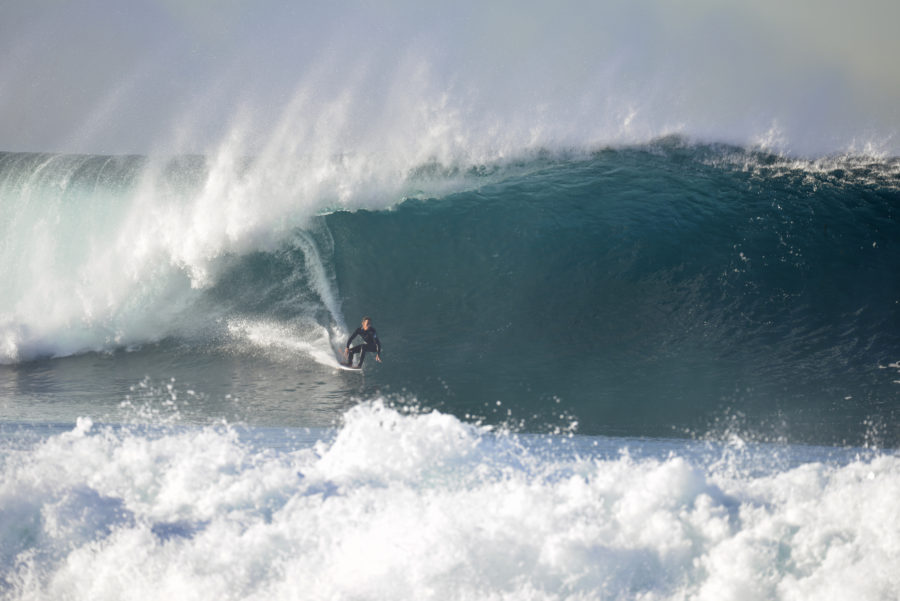 When big, north swells hit the north facing extension of the Breakwall, they bounce back and up, forming a jacking peak, which is the signature of a solid Breakwall swell. Surfers generally take off at or north of where the wave jacks up.

Luhrsen took off behind the peak. The decision maybe what accounted for his Big Wave Challenge award.

“It was a big wall,” Luhrsen said, “It began to shift after I dropped and entered my bottom turn.”

Photos from that day show him at the bottom of the wave barely outracing the lip. The peak is jacking up ahead of him, 30 feet in the air.

“I kept thinking, ‘Wow, I can’t believe I caught a wave this big at my home break,” he said. “When I got back to the beach and saw the pictures, it looked even bigger than I thought it was.” 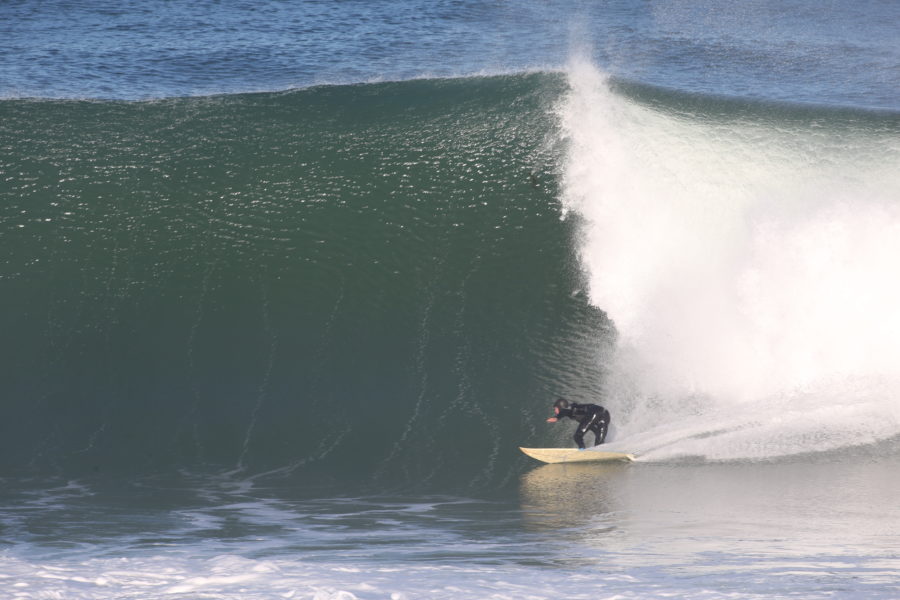 Beatty caught the wave behind Luhrsen’s. Beatty’s wave was almost as large as the one he caught last winter at Mavericks, near San Francisco, which earned him a nomination in the World Surf League Big Wave Award paddle division. But it wasn’t as big as Luhrsen’s.

The 23-year-old Luhrsen recently received his college degree in Maritime engineering and plans to move to San Francisco.

“I’ve surfed Mavericks two times as well as quite a few other secret Central California spots,” he said. “I’m eager to go back. At one of these secret spots, I got blown to the rocks holding my uncle’s 10-foot gun. I was so worried I’d mess his board up.”

“I have learned a lot from my dad and my uncles, James, Jude, and Chase and give them credit for inspiring me,” Luhrsen said. ER