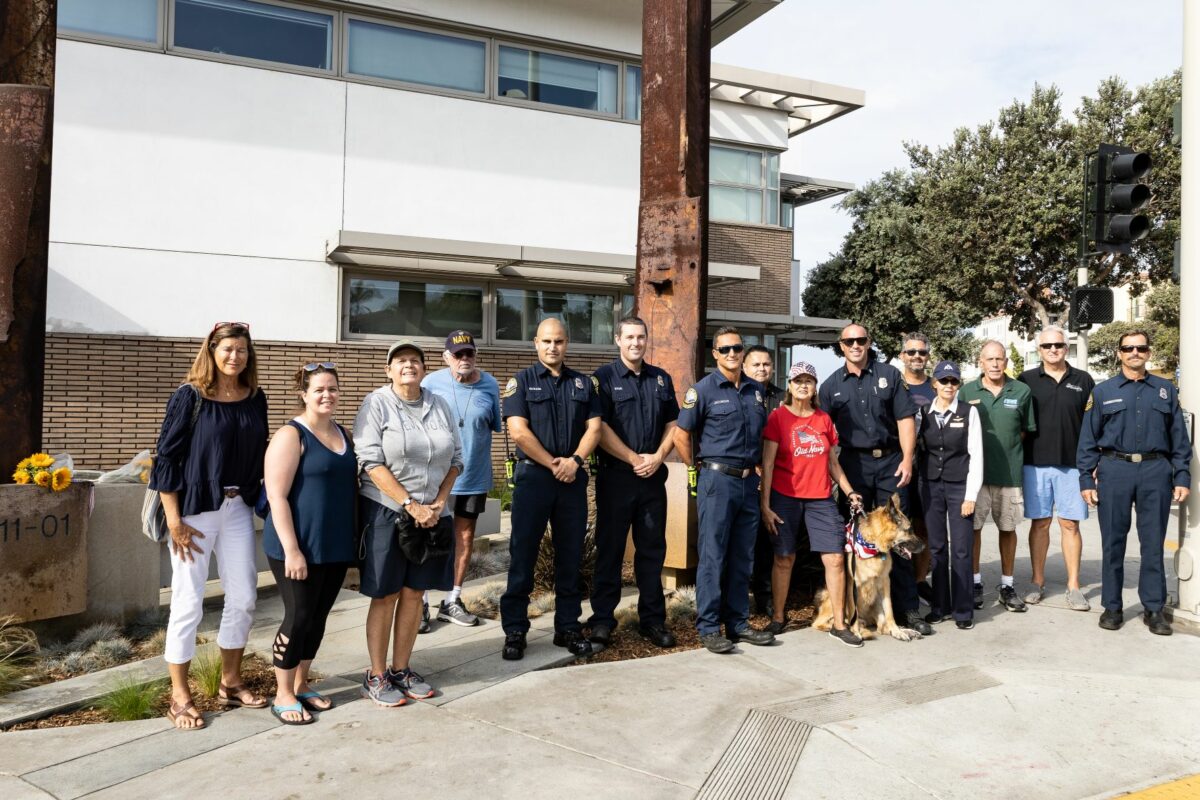 MBFD firefighters at a ceremony remembering 9/11 this month. Photo by Kevin Cody

The Council’s action came a little more than a week after the issuance of a fact-finding report, requested by the City, and conducted by a neutral third-party mediator. The report suggested a compromise that would have granted the City six of its 10 proposed contract concessions. The Council, instead, imposed all 10 concessions, including major changes, such as civilianizing fire prevention, downgrading paramedic compensation, and reducing pay for all new hires, essentially creating a two-tier salary structure.

Mayor Steve Napolitano did not try to sugarcoat the Council’s action.

“There’s no happiness here tonight on either side,” Napolitano said. “This is a sad moment. We couldn’t reach an agreement that we all thought was going to make our department sustainable, and something that is going to protect the citizens going forward.”

Councilperson Suzanne Hadley expressed love for firefighters, but took sustained aim at MBFA. She accused the firefighters of lying to the public —  about MBFA suggesting that the council sought to have fire services contracted with Los Angeles County, alleging that the council was cutting MBFD positions, alleging that City Manager Bruce Moe was behind the contract changes, and finally, suggesting that she had called a union leader “a thug.”

“I don’t use the word ‘lie’ lightly…but the repetition and breadth of the lies must be disputed in public,” Hadley said. “And that leads us to here, where we do need labor peace. I hear that over and over, and I agree. Lots of our residents’ money has been spent by the union in fighting this council to protect their status quo. There has been no movement in these negotiations for years, until this council stuck to its guns, and we headed into the fact finding process, and now there seems to be movement.”

The fact finding report, issued last week by mediator Najeeb N. Khoury, attempted to find middle ground between the City Council and MBFA. Khoury analyzed the oncessions sought by the Council and sided with a majority of them, including a change undoing “constant staffing” provision at eight firefighters per shift, instead making that a minimum staffing, thus avoiding overtime; the implementation of a two-tier salary structure that would reduce compensation for future hires; changing the contract so accrued holiday hours would be paid rather than used as time off later in the year; forcing firefighters to trade shifts for voluntary training, another means of avoiding overtime; and civilianizing the two fire prevention positions, which firefighters currently rotate though.

Khoury sided with MBFA in keeping current vacation time, rather than the City’s proposal to limit one firefighter per shift from taking time off; in keeping paramedic pay for engineers and captains at current rates, rather than reducing that pay for those hired after Jan. 1 of this year; and continuing to allow firefighters to convert unused sick leave to time off. The two parties did not substantially disagree on cost of living increases, suggested at 3 percent, although the City did not agree to this raise unless its other proposals were implemented.

On Tuesday night, MBFA president, firefighter and paramedic Rudy Meija, told the council that firefighters were willing to accept the compromises outlined in the fact finding report.

“The neutral person came up with six takeaways, so we lost fact finding,” Meija said. “It didn’t come out in our favor. But we agreed with the fact finding report. We will accept it, so that for us our only focus can be on the community’s safety, and not have to worry about the uncertainty of our future. We need labor peace. City leadership has been bullying us for years, and we are beat up. The unfortunate part about this is once you impose on us tonight, the bullying and beating will continue.”

The fact finding report’s recommendations were non-binding, meaning the Council was not compelled to accept any of the proposed compromises. Instead, the council imposed its “last, best, and final” offer, which included all its proposed concessions. The council’s unified front represented a determination to rein in what it deemed as excessive overtime, resulting in what one of its press releases described as the highest paid fire department in the state. The council repeatedly released links to compensation rankings that showed MBFD firefighters as all the highest paid employees in the City, with a few earning in excess of $400,000 last year and several over $300,000. The firefighters countered with an extensive public information campaign of their own, in which they emphasized staffing shortages and overtime caused by the City’s failures to fill vacant positions, abuses by battalion chiefs who accepted their own two-tier salary structure, and then left with work-related injuries, and an unstable work environment in which MBFD saw four chiefs come, and go in the last five years. MBFA also argued that the 26-person department operates more efficiently than other departments, providing the service of a much larger department with fewer people, and less overall cost to the City.

Meija said the issue of overtime had been misrepresented by the Council.

“The city wants to reduce overtime. They have said we are the highest paid, and we create our own overtime,” Meija said. “We’re not the highest paid. We’re simply at work more than anyone else. And the fact is the city built our department to rely on overtime to operate and function properly. They broke the system. They know the system, and we are just acting in accordance to a system that broke.”

More than two dozen residents spoke on behalf of the firefighters. Katherine Martin said she was a firefighter from a nearby agency, and noted that unlike civilian jobs, a regular non-overtime week for a firefighter is 56 hours.

“Which means that included in their base salary is more than 800 additional hours that firefighters work every year, compared to somebody who works a 40 hour work week,” she said. “And you might say that, ‘Oh, they get to sleep at the station.’ But I assure you that waking up multiple times in the middle of the night does not equate to good sleep.”

“Our firefighters have not had a cost of living increase in four and a half years,” Martin said. “They continued to work through the height of the pandemic with a contract that had, for more than two years, been expired. The City has refused to fill two vacancies, instead paying captains for key positions, which in turn leads to overtime to backfill their positions —  the same overtime that our city is raving about. You cannot punish firefighters for a problem that they did not create.”

Several residents spoke about the service the firefighters provide, including one woman who said a firefighter/paramedic saved her husband’s life last year, and a fire crew saved her home just last month.

Napolitano said MBFD’s excellence was beyond dispute. He repeatedly acknowledged the difficulty of the public contract negotiation process, but expressed hope that the end of this conflict might offer a new beginning.

“This is a very emotional issue for everyone,” Napolitano said. “It’s obvious. It’s emotional for me, It’s emotional for you. Everyone has a firefighter story. Everyone has a call that they made, and a response met in minutes. We are in constant debt to these folks. I certainly was during the last months of my father’s life, where they probably saw him more than I did. I’m uninterested in the character assassination of anybody. I don’t think it’s a dichotomy to say that you support the department, and support our firefighters, but also understand that we have a job to do on council.”

The new contract will be in effect for one year from its approval Tuesday night. ER