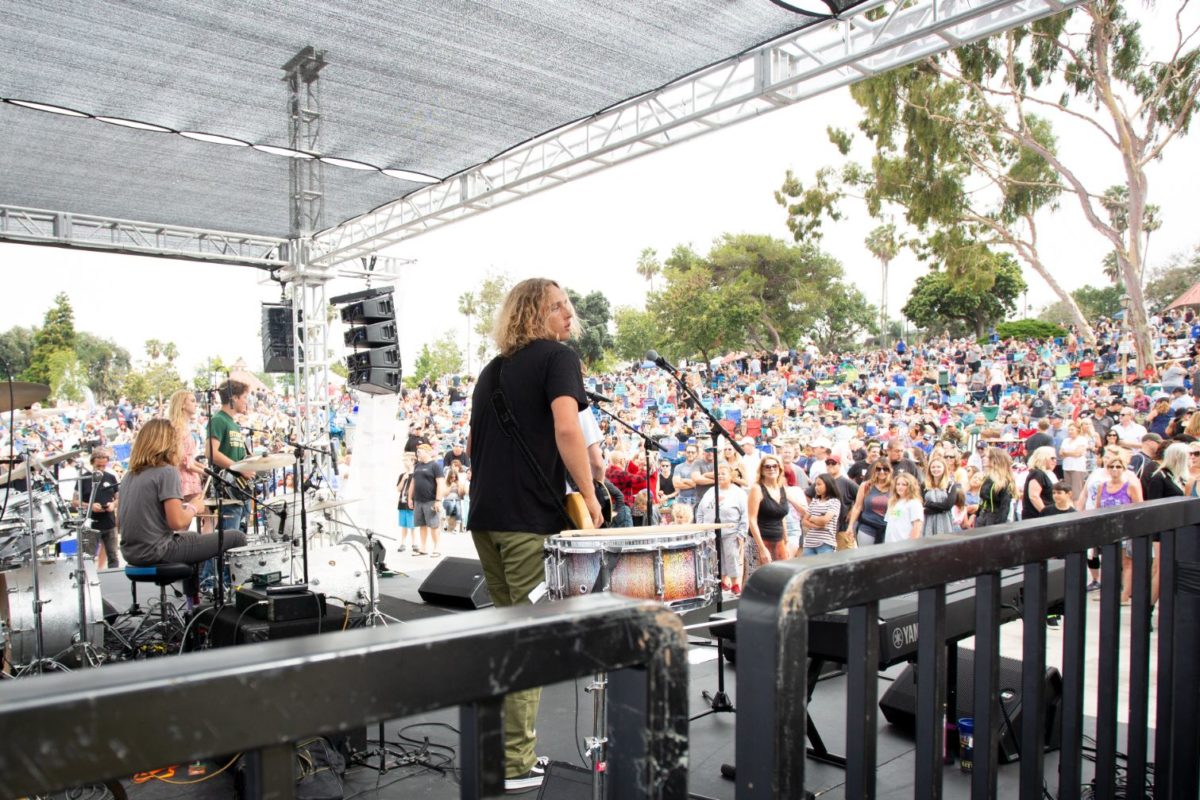 Teen bands will be allowed to play at the City of Manhattan Beach’s Concerts in the Park, the music series that takes place Sunday evenings throughout the summer. But not too much.

The city’s Parks and Recreation department has partly relented on what supporters of local teen music regarded as a “teen ban” that resulted from negative feedback received in a survey given to attendees of last summer’s concerts. Parks and Recreation Director Mark Leyman met with parents last week and arrived at a compromise: teen bands will be allowed serve as opening acts for two of the 10 events, which run from the last Sunday in June until the first Sunday in September.

Kat Monk, whose son Slater Heidrich is in the band Good Vibe, expressed mixed feelings about the compromise. Last year, teen bands played at nine of the concerts.

“We are very grateful that Parks and Rec compromised and gave the teen bands two days to play at Concerts in the Park,” Monk said. “That being said, part of the problem with Parks and Rec is they think the teen music only appeals to their peers. [This is] actually not accurate.”

Leyman said the dialogue with parents has been productive.

“I get it,” he said. “If my kid was up there [on the summer concert stage], I’m sure it’s a very cool experience. It’s been good meeting with parents, and I think we can actually come up with some great options for programming and balance what the community’s wants are.”

Leyman said the result has not only been a compromise but an inquiry into how the city can provide more outlets for local teen bands to perform publicly. Among the ideas are reviving a long-gone tradition, the Live Oak Park teen dances.

“Ultimately, what grew out of this how do we program for teens who are so over-programmed and over-scheduled and provide new outlets?” Leyman said. “How can we find creative ways to engage them?”

This also fits into Councilperson Steve Napolitano’s vision to make the city more art-centric, the “Florence of the South Bay,” as he has said in the past. He said the city’s increasingly robust public art program should not focus simply on murals and sculptures, but music as well.

“My vision revolves around the idea of activating the city culturally. I think we have done a pretty good job with our static arts programs —  that is, the visual arts center [the Manhattan Beach Arts Center] and now murals and sculptures. I would like to focus efforts on cultural events, the performing arts, music, neighborhood mini-festivals,” he said in an interview last year. “We have the resources to put on plays and music.”

Monk said she appreciates the city’s efforts to create more opportunities for teens to play music, but nothing being suggested adequately replaces the Concerts in the Park, which attracts an audience in the thousands.

“We are super grateful for some of the opportunities that Parks and Rec are offering,” she said. “Some of these opportunities will be well suited for the younger teen bands and middle school bands. The older teen bands, though, are looking for high volume areas to perform and showcase how hard they are working on their music. Gaining the musical experience of playing in front of a large audience in their own hometown.”

Gavin Heaney, a locally based professional musician from the bands Latch Key Kid and Slackstring, said public performances are hard to come by for young bands.

“It’s hard for teen bands to gig because of the lack of all-ages venues,” Heaney said. “I think the city has a duty to provide its youth with safe opportunities to perform music. When I was in my high school band AWOL, we played at an underground warehouse called Velocity Studios. Lots of sketchy things happened there. When AWOL had its first public gig at the Hometown Fair battle of the bands, all of Mira Costa turned up to support us. It was a great moment for us as up-and-coming musicians. Let them play.”

Pat Dietz, a musician, and teacher who co-owns Dietz Brothers Music, said the teen bands are valuable both because they are local and are performing original music.

“They seem to want tribute bands that are playing tracks up on stage so it sounds exactly like their CD player or whatever they are listening to,” Dietz said. “I can’t imagine sitting up there on a Sunday and listening to a Journey tribute band. I don’t get it.”

Carrie Dietz-Brown, who oversees the Dietz Bros “Summer of Rock,” from which many teen bands have emerged, said many of those bands are superior to many of the adult rock bands.

“Kids make any environment more authentic and especially when talking about playing music — nobody knows how to rock out like a bunch of kids,” she said. “That energy is what the adult musicians are trying to emulate.”

“Hometown Fair is certainly one venue that has done a fantastic job of showcasing and celebrating our local teen bands. I always enjoy listening to them and am so often surprised at how good they are.” Hersman said. “With regard to Concerts in the Park, the survey showed that some concertgoers didn’t like the teen bands. They felt it took away from the experience. I understand that our Parks and Rec department is looking at ways to support the teens and at the same time listening to those residents not too happy with the bands.”

Monk questioned the use of the survey as a rationalization. The survey was given out at the Sept. 1 concert at the end of last summer; 120 people turned in completed surveys. A majority, 69, checked either “disagree”  or “strongly disagree” with the survey statement: “Opening Acts added value to the overall concert experience.”

“Only 69 out of 36,000 people in Manhattan Beach checked the box that they didn’t enjoy the teen bands,” Monk said.

“I am sorry, I really don’t like the High Schoolers,” one commenter wrote. “They aren’t good enough to hear that loud.”

“Favorite part of concerts is when teen bands are finished,” another wrote.

“I cannot talk with my friends before the real show,” said another.

Her own son’s band played before an estimated 15,000 people, Monk said.

Leyman said the city does plan on more broadly surveying concert-goers and other residents this year, both at the concerts and online. But he said the survey was in keeping with feedback city staff received at the events themselves.

“Moving forward this year, we will do both [kinds of surveys] so we can get a good sense, on those days we have teen bands, of what the community is saying,” Leyman said. “And really, the benefit of this whole process is getting to meet parents and the kids, talking to them, and looking at opportunities. What are you interested in doing? How can we help you?”

To be included in future surveys, email mbparksandrec@citymb.info.