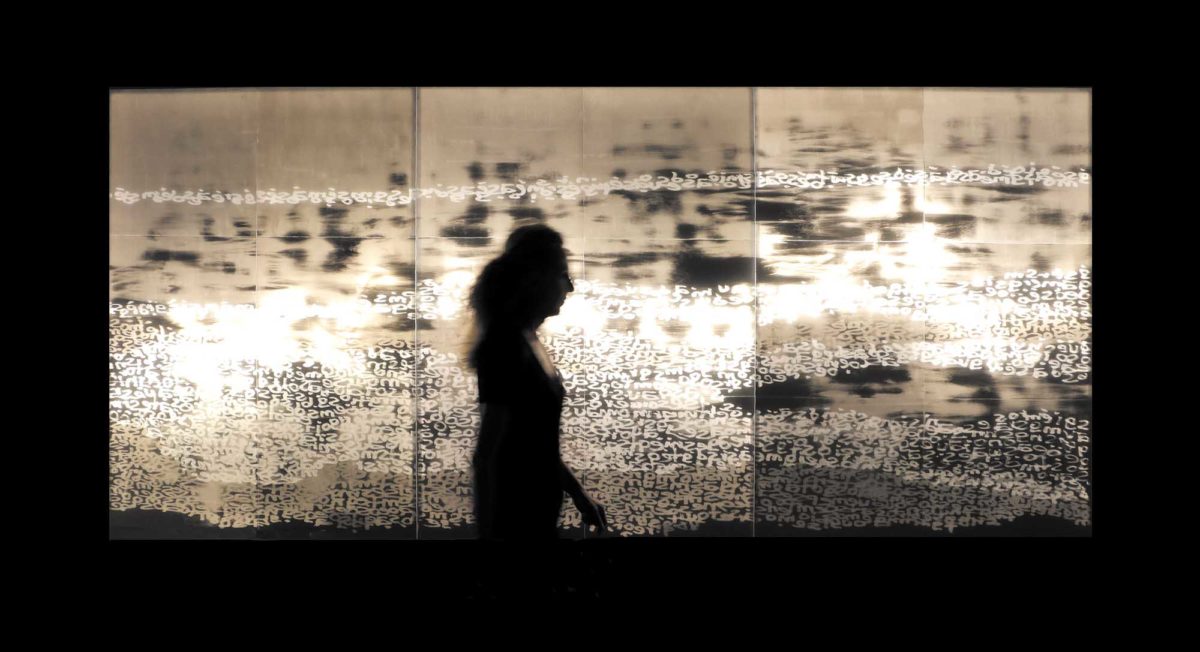 Into the light, out of the light

Artwork that’s singularly compelling dares us to try and box it in with verbal or written descriptions, and this must often be the case with the creations of Swiss-born Claudia Meyer, whose solo show, “ImmersiO,” presented by Homeira Goldstein and TIME4ART, opens tomorrow at the Manhattan Beach Art Center.

In general, someone can pick up a paintbrush and, after a few attempts, produce a plausible interpretation of a sunset glimmering on scalloped waves. More often than not, there’s no real desire to push oneself beyond that, let alone an idea of how to advance and improve.

That’s somewhat of a contrived example, but it underlines three things about Meyer, the first being that she uses the latest tools and implements, and the second being that she doesn’t settle for the status quo. The third is that she’s not following someone else’s path; she’s making her own as she goes along. Furthermore, there’s an urgency in her artistic exploration, and a ceaseless striving to evolve (a favorite word of hers) and to refine. When she reaches a new level of creativity she doesn’t sit back and bask in her accomplishment but immediately wonders what she can do going forward.

The pieces on view in “ImmersiO” were created over the past three years. They give the impression of having been painted with light, these glowing abstract forms and designs that appear futuristic and yet feel organic. Completely alien in some respects (see below), but inviting, seductive, and familiar in others. The materials are largely Plexiglas and LED lights.

At its core, the work draws its power from nature while Meyer employs the latest technology (before LED she worked with neon). At the center of the experience is the interplay of light and shadow.

“I like that kind of shifting,” Meyer says, during a break from helping to install the show. “It’s like in nature. Nature is transforming with the sunlight, the moonlight, and the shadows. And I’m doing the same thing with the painting.”

It’s a point she’s reached after 30 years, having begun as a graphic designer.

In many of the works there is a network of lines, wavy, jittery, or otherwise, and the light seems to vibrate or exude from deep within the Plexiglas. But because of her training (“I play with the writing and spacing between the lines”) there’s another component beyond the biomorphic focus: 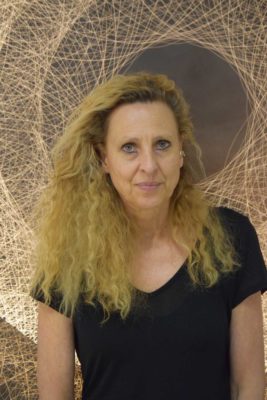 “It’s not just a flat surface with light; it’s texture,” Meyer says, and a texture that doesn’t stand still, “so that what appears during the day as very light becomes during the night very dark. It’s a reflective surface that is catching the light and transforming it.” This, she adds, is what continues to fascinate her.

But let’s go back nearly 35 years, when Meyer was in Stuttgart, studying with “the grand master of German design” Anton Stankowski. It was 1985, and “everybody was afraid of the computer. But I said, I’m not afraid; I’d like to know what is out there that I can learn.

“So I decided to go to New York, and I got another education in computer graphics. But it didn’t satisfy me. I needed to learn more techniques like screenprinting and textile design.”

Meyer began making graphic designs on the computer, creating patterns, and printing them onto fabric. A solo show with her prints back in Europe won her a prize “because nobody ever saw that before; it was brand new. And then I went further and further.”

What emerged were symbols, shapes, and a texture that could pass as extraterrestrial communication, and for me it calls to mind the film “Arrival,” in which the main actors attempt to converse with the intergalactic visitors who have suddenly appeared.

Meyer has a good laugh at this. “Well, it’s my own language, based on my handwriting. Everything you see in the show is actually handwritten text,” but graphically deformed. And then, she continues, “I put a second text on top of that text, and I flipped the second text and positioned it together so it becomes like a net. So, what you think looks like outer space language is actually two texts on top of each other.” After scanning it into her computer, Meyer works on it some more.

Although the text is originally written horizontally, Meyer often takes the beginning and the end, stretches them, and curves them up and around until they meet. The result is a circular art piece, and that’s not by accident: “The circle is the symbol of life.”

In all likelihood, what we’re looking at now is only a stepping stone. Meyer already has ideas for future artwork (sculpting with solar energy) that is different from what she’s done before.

“We all start somewhere. We evolve, we learn, we see what’s surrounding us, we learn and we keep going. For me, this is very important. It’s my personality. I sketch, I don’t take any pictures. It’s all in my head. I collect images from nature and all this comes together. What you see,” she makes clear, is the result of her 30 years of artistic growth. 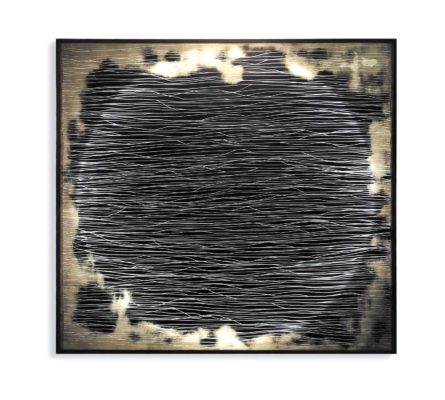 A child of nature

Meyer is from Lucerne, a lakeside town with medieval roots high in the mountains of Switzerland. Being surrounded by nature was a supreme inspiration. She mentions the undulating waterlines in her work and their reflective qualities. “If you look at nature, there’s so much there, so much you don’t even notice. And I love to look at details.”

Her parents were also highly integral to her development, and specifically her father, an architect, whose own favored architects included the American Frank Lloyd Wright and the Swiss-French Le Corbusier. “I grew up with the books that he had, and instead of looking at kids’ books I looked at architecture books. My father was doing everything himself: building his own home, making our toys, making furniture. Everything was homemade. So I learned a lot from him.”

Additionally, “My family was very connected to nature,” Meyers says of her parents, herself, and her three siblings. “We spent most weekends in the mountains,” hiking, climbing, or skiing. “I think I can compare that to the strengths and energy [needed] to do what I’m doing.”

Another lesson learned from her father: “Everything I do is homemade.” Her artwork? “I make everything from scratch…I grew up with recycling. Switzerland was one of the first countries doing this.” And her father, when he built homes, used environmentally-safe products. Likewise, the Plexiglas that Meyer employs is also from recycled material.

But surely, I say, touching on the topic of inspiration apart from nature and family, there must be painters and other artists with an impact upon your development?

“I was more focused on architecture,” Meyer replies, “but of course…” and she mentions the Spanish painter Mirō. And what of Klee, Kandinsky, Mondrian; did any of them inspire you?

“I know all of them,” she says. “But I try not to relate too much to somebody because I’m trying to do what I have inside, [trying] to develop my own style.”

It’s a good answer, actually, for whatever Meyer absorbed from other artists in the past has long since become an integral part of her. And now? There is no longer a need to look back, only to keep looking forward.

Speaking of looking, wait until you see her art, much of it illuminated from within.

“Light has always been part of my life. Light is so important, light and shadows. In the past I was more focused on the shadows, and today it’s more the light.”

Was this what attracted the attention of Homeira Goldstein? 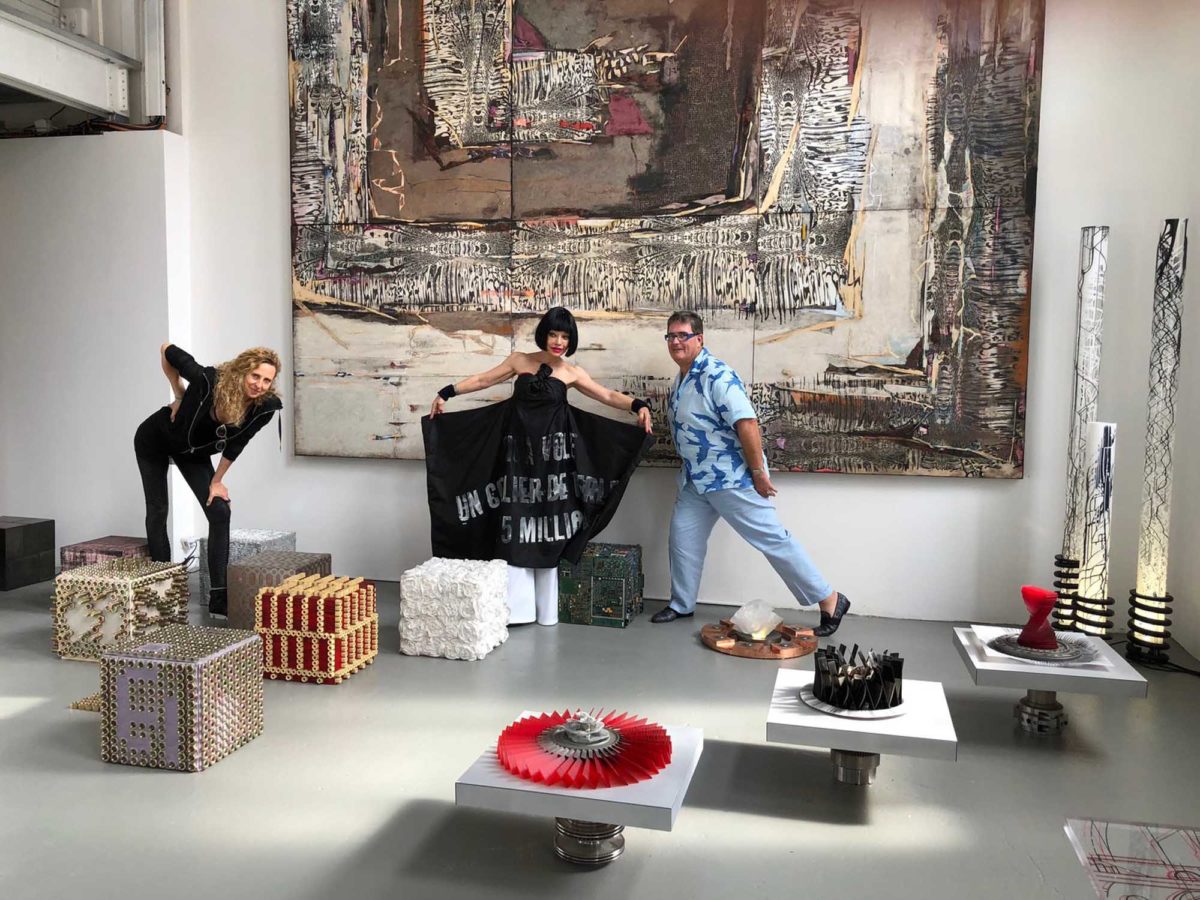 And why she’s now here in L.A.

“I saw her work years ago in Palm Desert and I liked it very much,” Goldstein says, of when she first noticed the art of Claudia Meyer. “I was kind of elated. It took me to a higher, happier place. Personally, I love light. Light is very important in my environment. I also deal with a lot of darkness and somehow she brings these two together. 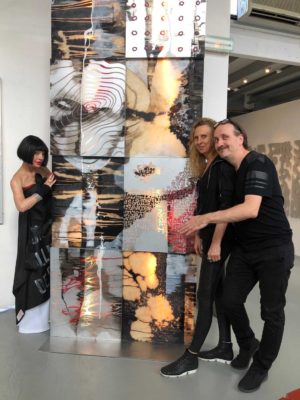 “She doesn’t lose sight of the dark. She definitely brings that into her artwork and into the picture, into the place where you are. The Zoroastrians believed in two symbols in the world, the symbol of goodness and the symbol of evil. These two forces fight each other all the time, and it’s for the light to prevail.”

And then last year Goldstein went to France, initially to attend “The Rose Empire: Masterpieces of 19th Century Persian Art” at the Louvre-Lens, a regional branch of the Musée du Louvre in Paris. The show featured works from the Qajar dynasty, which is part of Goldstein’s own heritage.

Having mentioned her travel plans to Meyer, Goldstein was invited to visit the studio and permanent showroom that Meyer keeps in Paris. (As she notes elsewhere, this showroom contains “not just my latest work…I have a bit of everything there.” In lieu of flipping through a portfolio, a potential gallerist or art dealer can savor the assortment first hand.)

Goldstein took up the offer and stopped by. “We had an amazing time,” she says. “I was very impressed by the way she does her work and her attention to details. That’s where we really connected, and I wanted to show her work.”

A photograph from that afternoon includes the artist in black and a fashionably animated Goldstein along with Manhattan Beach resident Scott Murray, owner of Able Freight and a Time4Art sponsor. The picture was taken by Stephan Toczé, Meyer’s life partner and her backbone of support, whether on the computer or carting artworks from place to place. 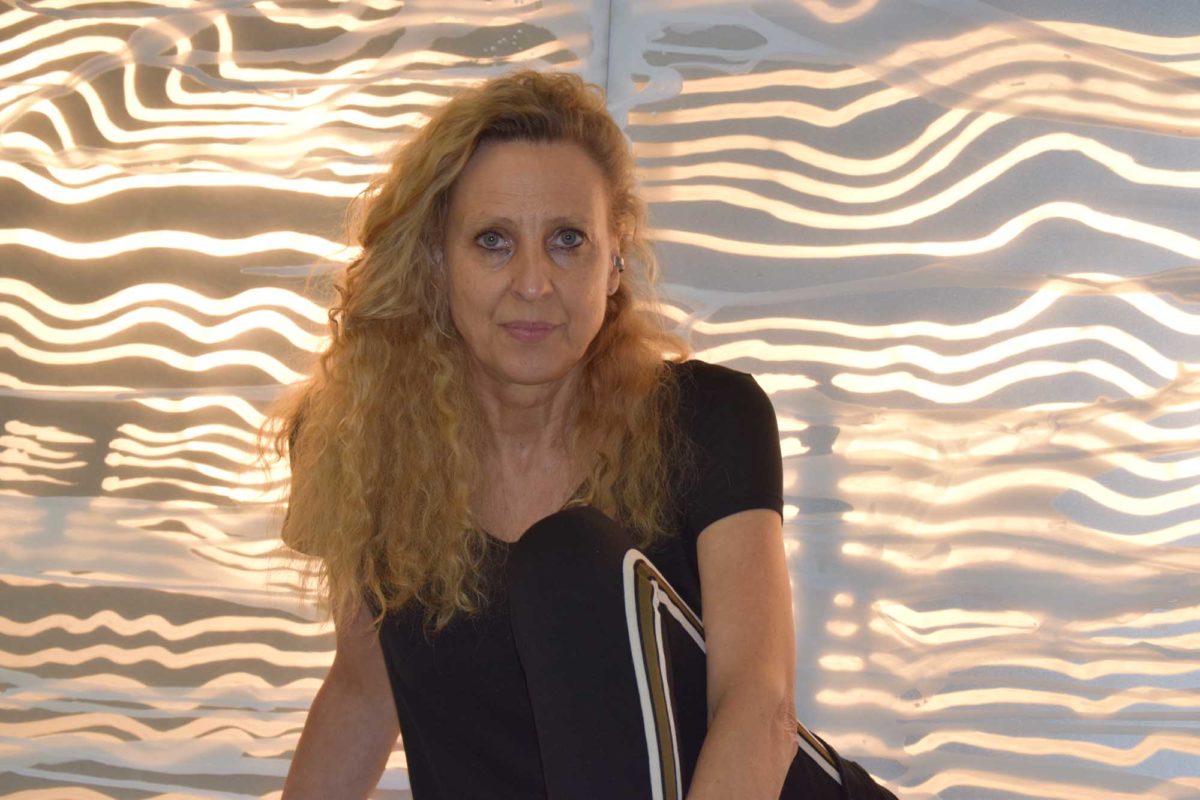 Still evolving, but giving back

The show in Palm Desert, which Homeira Goldstein saw four or five years ago, wasn’t the first time Meyer’s work has been shown in Southern California.

“I don’t even know how many I’ve had,” she says. “Every year, maybe two, sometimes three solo shows. I am doing more solo shows than group shows because my work is not easy. In a group show it doesn’t work because you don’t get in the environment of an artist. It also depends on who is next to you. It can fight you; it usually doesn’t bring the pieces out. Unless it’s a sculptor; sometimes you find a connection. But I hardly ever find a connection with artists.”

After “ImmersiO,” Meyer’s next solo show, opening on Jan. 18, is back in Palm Desert.

While still exploring on her own, Meyer hopes more and more to assist others. “I’m almost 60 so I feel like I have to start helping the young generation to show their work. It’s different than when I started, but I want to show them what they could do with what’s happening today.”

That doesn’t mean she wants to collaborate. “I have all these people who want to work with me but I’m not working with anybody. I’m totally on my own, but I enjoy that very much.”