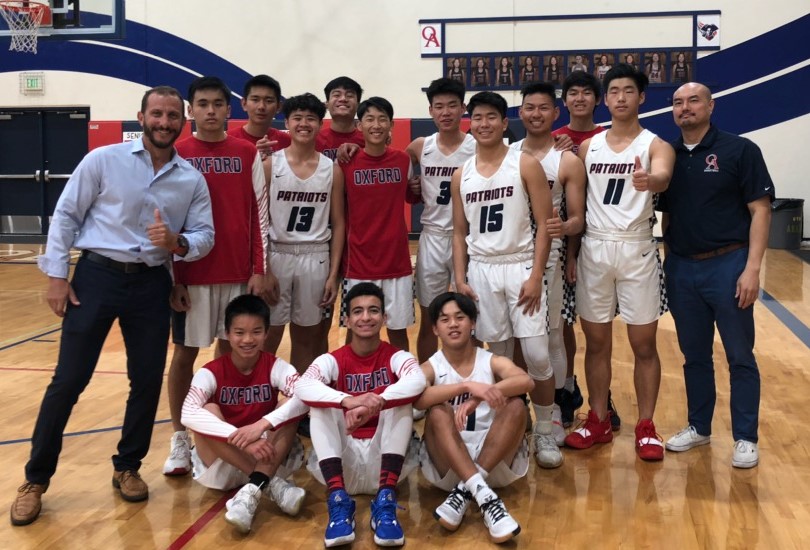 Coach Chris Palisin, of Hermosa Beach, with the Oxford Academy team he led to the playoffs for the first time in the sacademic powerhouse’s history.

Five years ago Chris Palisin charted a mid-life course-correction that paid off big-time for himself — and for Oxford Academy, the academic powerhouse in Cypress where the long-time Hermosa Beach resident was named the new head basketball coach last spring.

In his first season at Oxford, Palisin led his team to the best record in the school’s history –16-12 – and to the playoffs, for only the second time in school history.

“We’re very happy with the job Chris did for us this year,” said Oxford Athletic Director Dave Clifton. “It wasn’t just us making the playoffs. It was the culture of discipline and accountability that he installed. That was exactly what we wanted and needed, and he delivered it just as we hoped he would.”

In a recent article in U.S. News & World Report, Oxford Academy was ranked the number two school academically in California, and number 17 nationally. Although technically a public school with 900 students 9-12, students must pass a test and be selected to enroll.

At first glance, it was an unlikely landing place for Palisin, widely known in the Beach Cities for his intense, laser-focused, no-bull approach to all sports, whether its basketball – he’s a two-time champion of the Live Oak 3-on-3 tournament — or baseball, where he umpires Little League games whenever he can get a gig that fits into his crowded schedule.

The win-win partnership of a hard-driving head coach and an academics-first high school in need of a basketball makeover might never have happened without a pro-active mid-career move by Palisin.

Five years ago his coaching career was muddling along at La Quinta High School in Westminster, where he got his first head coaching job. He was a walk-on coach – meaning he did not teach at the school where he coached.

He didn’t teach at the school because he didn’t have a professional teaching credential. That meant he relied on his career as a personal trainer and Little League umpire to subsidize his meager coaching stipend.

At the age of 39 he realized he had to up-grade his resume and make himself more attractive to potential employers. So he started commuting from Hermosa to Long Beach State, where he earned his teaching credential in physical education. Now he was ready to shop his coaching skills and resume the upward trajectory that had started with a freshman-sophomore coaching job at Redondo High School all the way back in 2006.

Palisin, 44, was chasing a dream that had begun in the Pittsburgh suburb of Hermitage, where he played point guard at Hickory High School – not the Hickory High of “Hoosiers” fame, but still a hotbed of hoops dreams. There he led his team to the state’s final four in their divisional playoffs.

“I’ve always loved basketball, and I used to dream about being a coach,” he said. “But I got side-tracked into the corporate world.”

After graduating from Penn State in 1998, he moved to Atlanta and got involved in corporate fitness with a job as a personal trainer and fitness club manager.

He moved to Southern California in 2004. After a year in Laguna Beach and a year in Manhattan Beach, he settled in Hermosa and has lived there ever since.

He got started at Foothill High School in Tustin as a Junior Varsity coach, then coached the Redondo freshman-sophomore team to a 24-1 record for the 2006 season.

“That was a magical season,” he recalled. “I loved working with those kids.”

His one-loss season attracted some attention, and in 2007 he was named the junior varsity coach at Palos Verdes, where he stayed until 2010.

That entire time he continued looking for a varsity head coach job. He went through a lot of interviews, but his tough-love, fundamentals-first style was not an easy sell.

“I couldn’t find that right fit I was looking for,” he said.

He left PV for a lateral move to Pacifica, where he served as junior varsity coach and a varsity assistant under Dave Friedman.

Finally, with Friedman’s help and support, he broke through and got his first head coach job at La Quinta in 2012. In his first year he posted an 8-win improvement and stayed there until 2017.

He spent the next two years as head coach at Hawthorne High School, which has long struggled to field a competitive team. Although he again posted a significant win improvement and actually got a junior varsity program started, he kept looking for his next step up the ladder.

When he heard about the Oxford opening, he was quick to apply. Next thing he knew he was being told by coaches and athletic directors he knew that they were getting calls about him from Clifton, Oxford’s AD.

“That’s when I knew they were seriously considering me,” he said.

Although Clifton said he knew nothing about Palisin – who everyone calls C-Pal – he soon realized he might be exactly what Oxford was looking for.

“I talked to a lot more people than just the ones he had listed as references,” Clifton said. “The more I learned, the more I thought he might be the right guy for us.”

Clifton is currently the girls’ basketball coach, and had been the boy’s coach from 2000-04. Since then the school had gone through six boy’s head coaches, and Clifton didn’t like what he saw of the program’s culture.

“I would walk into the boys practice and see 6 or 7 kids playing pickup games,” he recalled. “I’d ask where’s the rest of the team, and they would just shrug. So we wanted a coach who would hold kids accountable.”

Palisin delivered exactly that, but with a humane touch and a surprising sense of humor.

“He’s actually a very funny guy behind the drill sergeant exterior,” Clifton said. “A couple of kids had trouble handling the change, but by the end they all loved him and responded to what he wanted.”

Jonathan Watanbe, who coached the 605 league champion Cerritos – yes, it’s named after the 605 freeway that connects all the league schools – said he was amazed at the new attitude displayed by the Oxford players.

“We were scouting Oxford before we played them, and we noticed right away that their new coach was really high-energy, really passionate about his players,” Watanbe said. “In the last game of the year, the freshman coach wasn’t there, so Chris stepped in and coached those kids with same energy and sense of caring that he gave to his varsity players.”

Clifton observed the same approach, whether in games or practices.

“He’d always start with a light blue shirt, and by the end it was navy blue from all the sweat pouring off him. We’re so lucky to have him coming back next year.”