It’s a Cold War at the Wende Museum 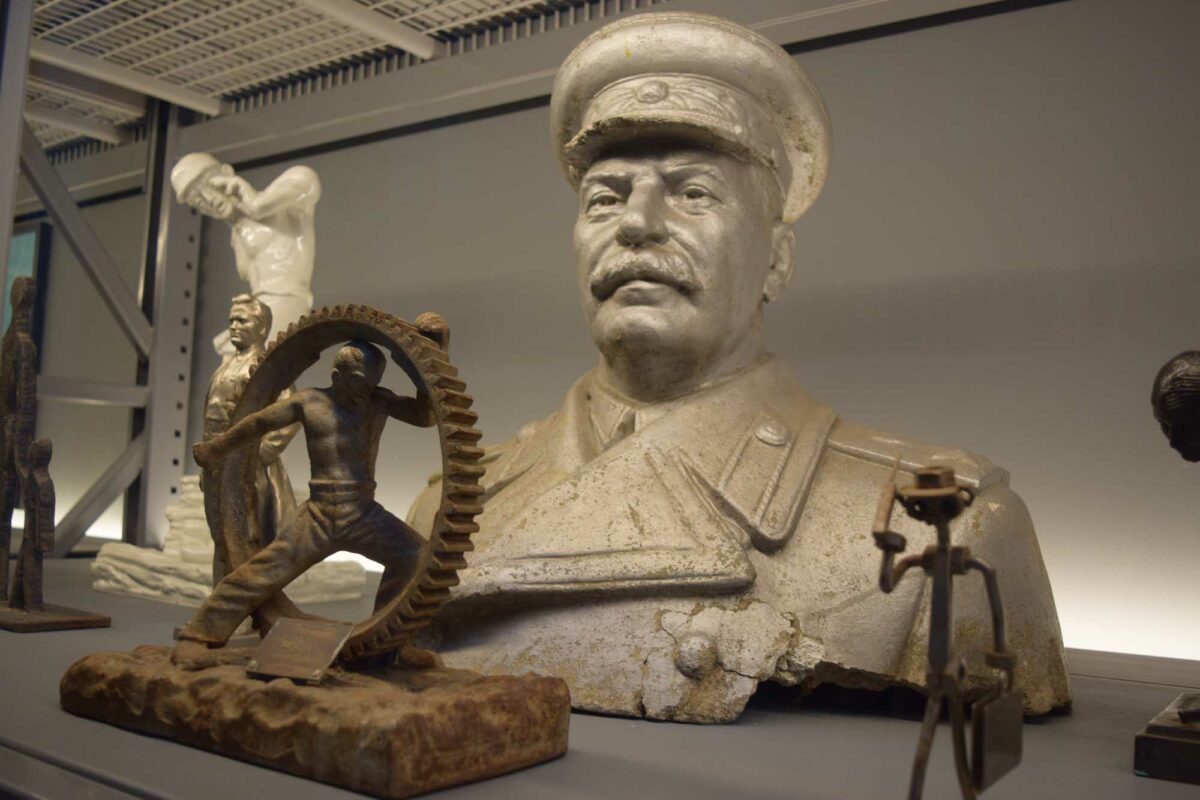 Josef Stalin and other reminders of the former Soviet Union. Photo

Josef Stalin and other reminders of the former Soviet Union. Photo

Comrade, please step this way
The Wende Museum of the Cold War is now open in Culver City 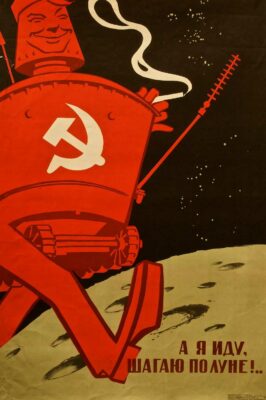 One day the years from 1945 to 1991 will seem like a blip on the screen, but that was the era of the Cold War when tensions ran high between Russia and the United States, between democratic Western Europe and communist Eastern Europe. We might assume that an institution devoted to this time period would be quite specialized and even rather dull, but for those harboring such a notion there’s a surprise in store.
The Wende Museum opened in Culver City this past weekend. On Friday, founder Justinian Jampol and chief curator Joes Segal invited the press to have a look at their new digs, a far cry, in many senses, from the business park site that formerly housed the collection.
Addressing those gathered, Jampol said, “I don’t think there’s any better symbol of this journey than the fact that where we are is a (former) Cold War National Guard Armory, and if that’s not poetic, I don’t know what is. A place that was built for war has been transformed for peace, for culture, and for education.”
Wende is the German word for change, and it applies here to the openness and freedom that blossomed after the fall of the Berlin Wall in 1989 and the gradual dissolution of the Union of Soviet Socialist Republics.

So what’s inside?
The Wende has opened with three exhibitions, the dominant one being “Cold War Spaces,” which includes work from the Wende collection as well as contemporary artwork. “Vessel of Change” is a succinct multimedia installation, a reinterpretation of the December 1989 Malta Summit between George H. Bush and Mikhail Gorbachev by David Hartwell and Bill Ferehawk. Lastly, there’s “The Russians,” consisting of enlarged photographic portraits taken by Nathan Farb in 1977 at the exhibition “Photography USA,” which was on view in Novosibirsk as part of a cultural exchange program during the Carter Administration. 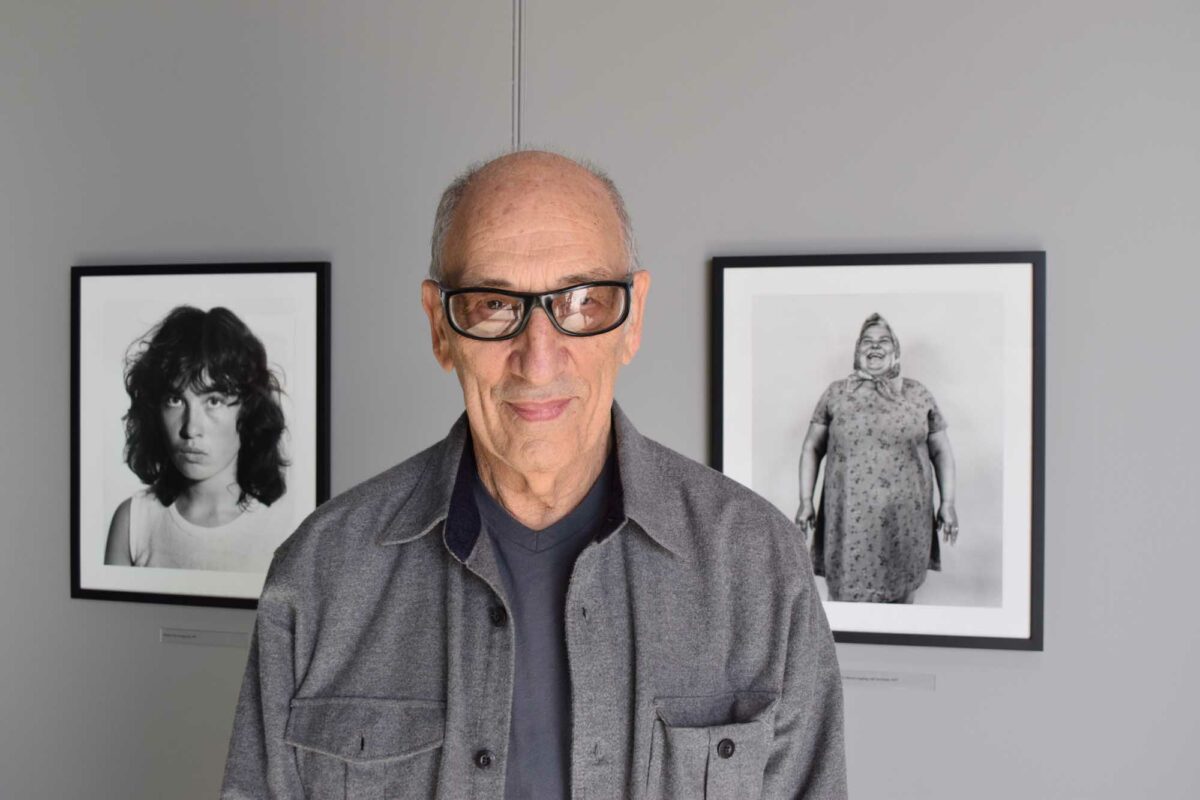 Nathan Farb and work from “The Russians” series. Photo

In a brief one-on-one conversation, Farb had quite a bit to say about his time in Russia and his encounters there: With a Polaroid camera, Farb photographed visitors to the show. He then gave these people their pictures but kept the negatives, which were smuggled out of Russia with a diplomatic pouch at the U.S. embassy.
What would have happened had he been intercepted? Well, it’s hard to gauge the mindset of security officials in another country and at another point in time, but Farb remarked that as he was departing, and as a customs inspector was going through his belongings, an official came over and told the inspector that the negatives had already left the country. It was, of course, an enigmatic comment. Apparently he, and others, already knew something. But what, and how did they come to know it?
On the other hand, Farb hadn’t photographed military sites or sensitive documents. His portraits are varied, intriguing, and, as the Wende puts it, “In this series, Farb gave the Cold War enemy a human face.”

And how large?
I understand that the Wende will have 100,000 artifacts on display, but I’m guessing this includes the 25,000 volumes on floor to ceiling shelves along the two outer corridors. “Anybody can grab a book, in many different languages,” Jampol said; “find a spot in the corner of the museum, and find your place at the Wende.”
The objects within the 25,000 square feet of the former armory range from household appliances like radios, televisions, and record players to toys, games, dolls, statuettes of Russian heroes and leaders, commemorative objects of all shapes and sizes, and a half-size model of Sputnik. Everything but the sound of Laika’s bark. Maybe one day we’ll see an exhibition of the old Soviet-era automobiles (the Skoda, Trabant, GAZ M21, etc.).

Busts and statuettes of Vladimir Lenin come in all shapes and sizes. Photo

Perhaps nothing conveys the futility and fragility of human endeavor better than ruins–the photos of an abandoned Chernobyl being a good example of this–and fragments: Pieces of the Berlin Wall are on view as one enters the museum. In fact, what better symbolizes the death throes of the Cold War than when the wall came down? (although, when the Romanian dictator Nicolae Ceausescu was overthrown, I was next door in Hungary, and with honking cars and banners unfurled that was certainly a milestone to witness)
Of course, there’s more to meet the eye and that’s why the Wende is here, so that we don’t ever forget the story in its details. For instance, I wish that Günter Grass and Christa Wolf were still with us, as both of them commented in depth about the ramifications of the Federal Republic of Germany being reunited with the German Democratic Republic. Sure, those in the GDR welcomed their liberation from Communist rule, but there was plenty of resentment as well when those from the West wanted to rush in and change everything. “Two States – One Nation?” by Günter Grass is still worth reading for what his concerns were about reunification (as he noted, the citizens of the GDR “unfairly bore the brunt of the Second World War, which had been lost by all Germans… So we owe them a great deal.”) 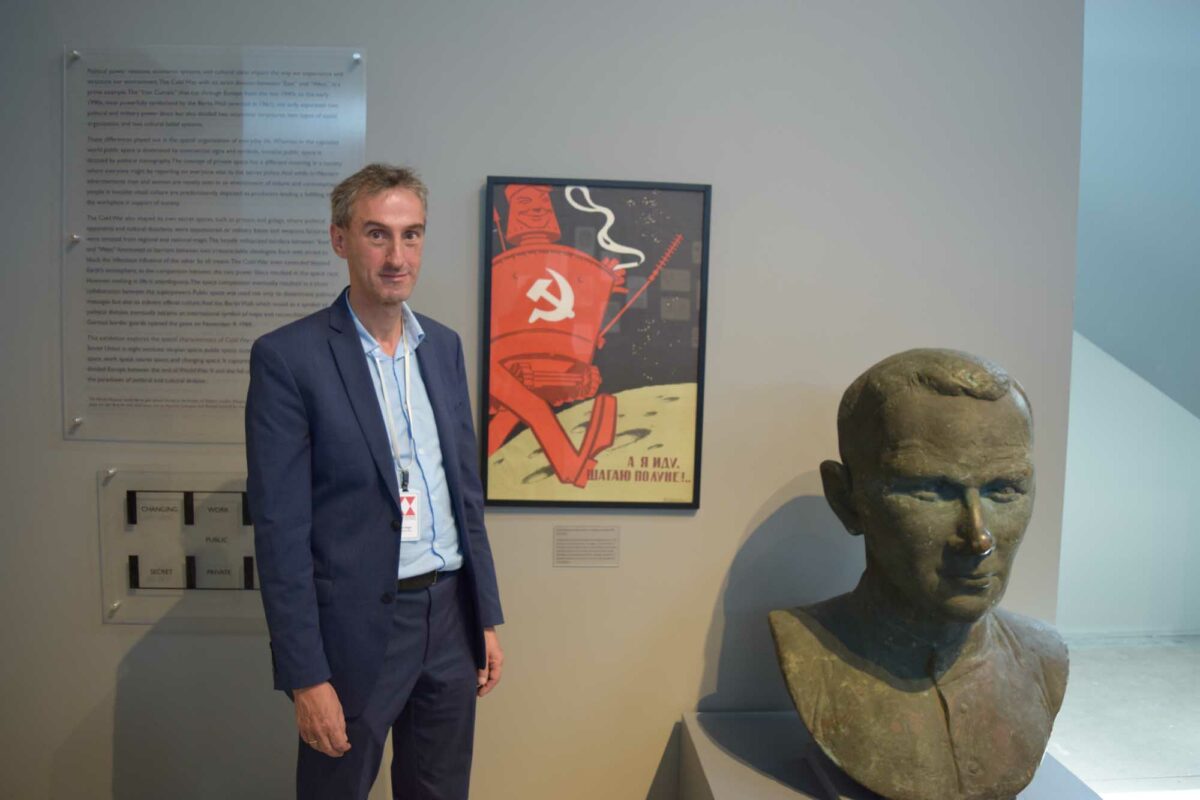 In years to come, I’m sure the Wende will broach every topic imaginable relating to the Cold War. At the press event, curator Segal said, “I think two concepts define the mission of the Wende Museum: transparency and experimentation.” Transparency in the sense of accessibility for student, scholars, and the general public, and experimentation in the sense of giving people the opportunity to explore, create, and interpret the contents of the collection, using history and memory to connect the past with the present and keep it relevant.
“I want to end by saying that the Cold war divided the world,” Jampol said, concluding his remarks, “but here and now it brings us all together.”
The Wende Museum of the Cold War is at 10808 Culver Blvd., Culver City. The current exhibits are on display through April 29. Hours, Friday from 10 a.m. to 9 p.m., and Saturday and Sunday from 10 a.m. to 5 p.m. Free admission. (310) 216-1600 or go to wendemuseum.org. ER
(Note: this article originally appeared in the Nov. 23 edition of Easy Reader. On Sunday, Feb. 18, from 4 to 6 p.m., the Wende Museum is hosting a conversation between artist, curator, and writer Corrina Peipon and artist Bari Ziperstein about how the past gives meaning to the present. Chief curator Joes Segal will moderate. The event is presented as part of the discussion series “Art – Past – Present.”)