Bob Dylan fans! The 27th annual Dylanfest is this Sunday! 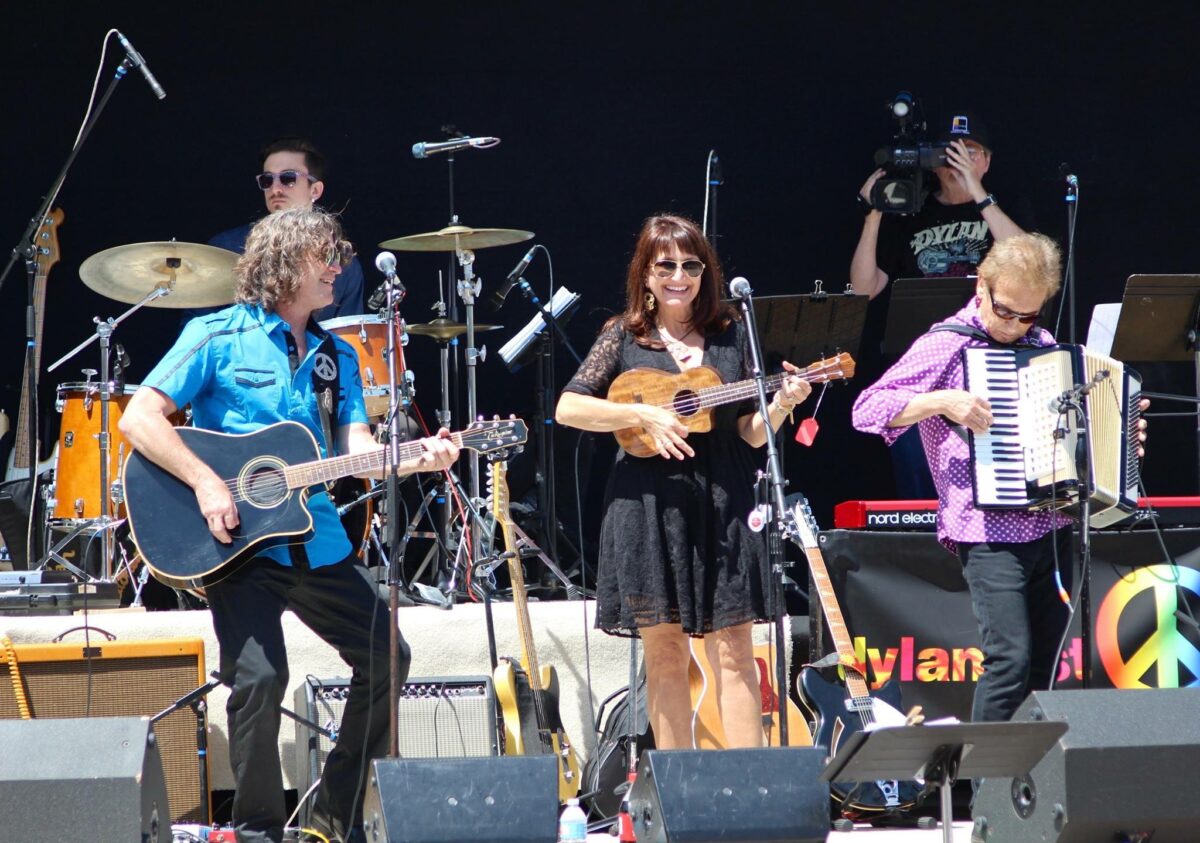 Onstage with Andy and Renée and, on accordion, Dave Batti 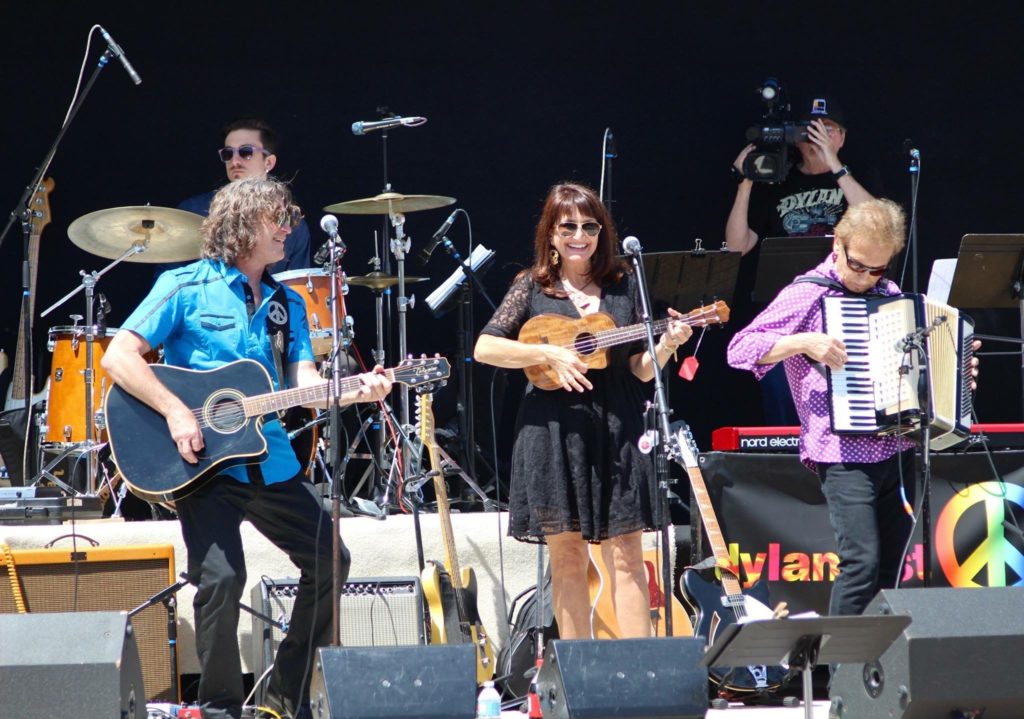 Onstage with Andy and Renée and, on accordion, Dave Batti

Andy and Renée’s “Dylanfest” is on its 27th leg

Bob Dylan didn’t need to pull in the Nobel Prize for Literature in order to be respected as a master tunesmith and lyricist. He’s had people passing along that idea for half a century. But it’s certainly a milestone, unprecedented in the field of popular music, and it clearly impressed Andy Hill and Renée Safier, or Andy and Renée, a performing folk-rock duo that first organized a backyard “Dylanfest” in 1991, that has since grown in size and stature. Now in its 27th year, the daylong tribute returns on Sunday from 12 noon to 8 p.m. at the Torrance Cultural Arts Center.

Now, as to what they thought upon hearing that Dylan had been awarded literature’s most-acclaimed honor…

“Personally, I couldn’t have been happier,” Andy says. “I’m no expert on what the requirements are to win a Nobel Prize, but it did get me thinking about the nature of Bob Dylan’s contributions to the culture. Before Dylan, you didn’t have songs with extensive metaphors, symbology, poetry. Dylan borrowed the social consciousness from Woody Guthrie, and everybody else got it from Dylan.”

It’s hard to argue that Dylan’s musical footprint didn’t vastly alter the depth and direction of pop, folk, and rock during the latter third of the 20th century.

“I think he dynamited an underground railroad that brought us all the greatest artists,” Andy continues. “Anybody who ever included more content than a hummable tune I think owes a debt to Dylan. And in that way it’s a contribution to culture in the form of literature.” He pauses. “It’s bigger than songs to me.”

“And literature started out as songs, right?” says Renée, which conjures up images of epic poetry from “Beowulf” to the “Iliad” and the “Odyssey,” presumably intoned around campfires, then by way of minstrels and troubadours right down to the present day and such ballads as the 16-½ minute “Highlands” on Dylan’s “Time Out of Mind.”

“In Robbie Robertson’s recent book, ‘Testimony,’” Andy says, “he described Bob Dylan as a man who probably knew more songs than anyone walking the earth. When they (Dylan and The Band) collaborated at Big Pink in Woodstock, he was talking about what an average day was like. And they could almost never name a song that Dylan didn’t know all the words to. There’s something Homeric in that observation. This is pre-Internet; you can’t just look up the lyrics, you’ve got to have them in your head or not.”

Renée points out that, with his many references, Dylan is obviously well-read.

“T.S. Eliot, F. Scott Fitzgerald, Ezra Pound,” Andy says. “This is just something that didn’t happen in music before Dylan.” 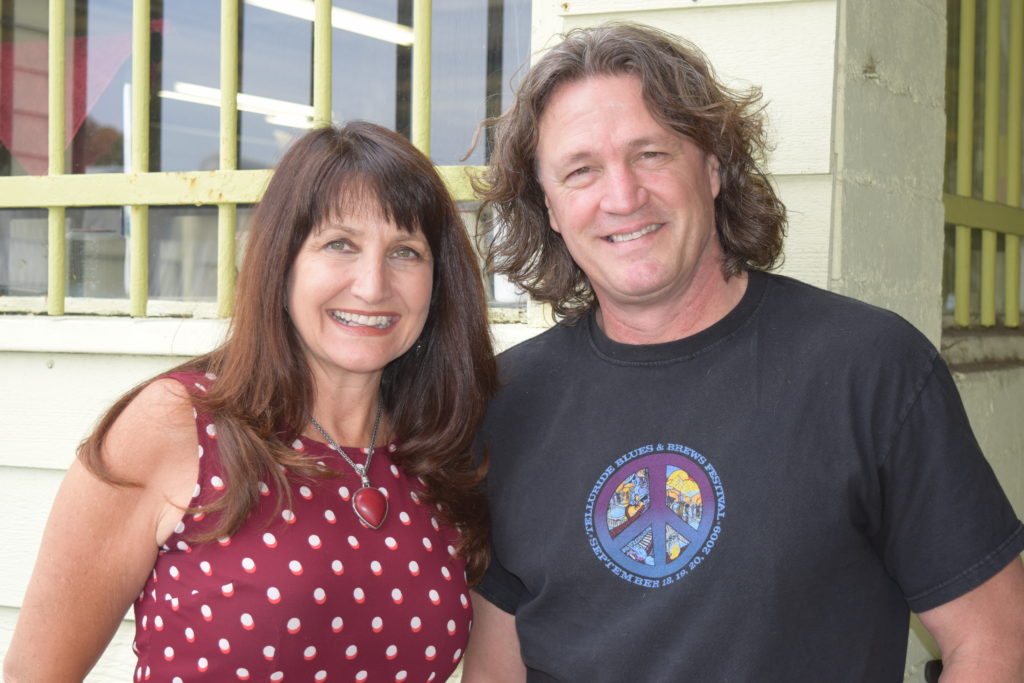 A few hundred, and counting

Bob Dylan hasn’t seemed so prolific in recent years, but like coins in a piggy bank it’s been adding up since the early 1960s if not before. So how many songs are there altogether? “It’s between on the low end about 600, on the high end about a thousand,” Andy says. I imagine that others have narrowed it down some, but with unreleased tracks, co-written tunes, etc., along with numerous bootleg albums cropping up, chances are Dylan himself doesn’t even have a correct tally.

Perhaps a better approach might be to ask Andy and Renée how many different tunes they’ve performed over the previous 26 years. Considering that the duo, with or without their house band Hard Rain, oversee or play some 60 songs every year, one might guess that they’ve covered the majority of the repertoire, even if that number does soar up past 800, 900, or a thousand.

But both Andy and Renée quickly say no.

“I bet it’s less than a third, a quarter,” Andy replies. “Let’s say he has 700 songs; I bet we’ve done 200 maybe. We get through about 60 to 65, but each year there are probably 20 that are always played. You’re going to hear ‘Blowin’ In The Wind,’ you’re going to hear ‘Like A Rolling Stone’ and ‘Tambourine Man’ and ‘All Along The Watchtower.’ Those songs are critically important because the festival is for everyone, not just for hardcore Dylan fans who’re looking for an obscure track that was left off whatever album. We like to have those in there too, because when you’re doing a show that’s eight hours long you’ve got room for that.”

Renée points out that they don’t only want to perform the older work from the 1960s, a decade which contains most of Dylan’s better-known songs, but to scan through and then represent the entire career, which in this case extends to the last studio release of original songs, ‘Tempest,’ and on up to ‘The New Basement Tapes,’ released in 2015.

“Somebody found a shoebox full of lyrics,” Andy explains, “that Bob Dylan wrote at Big Pink while living with The Band guys, in the same town, that had never been used. So (producer) T-Bone Burnett gathered a bunch of people, including Elvis Costello and Taylor Goldsmith, and each of these people composed music to one of these songs (lyrics), and they released the album.

“So, the most recent song we’re going to perform this year will be ‘Florida Key,’ a co-wrote between Bob Dylan, lyric in 1969, and Taylor Goldsmith of Dawes, music written in 2015.” 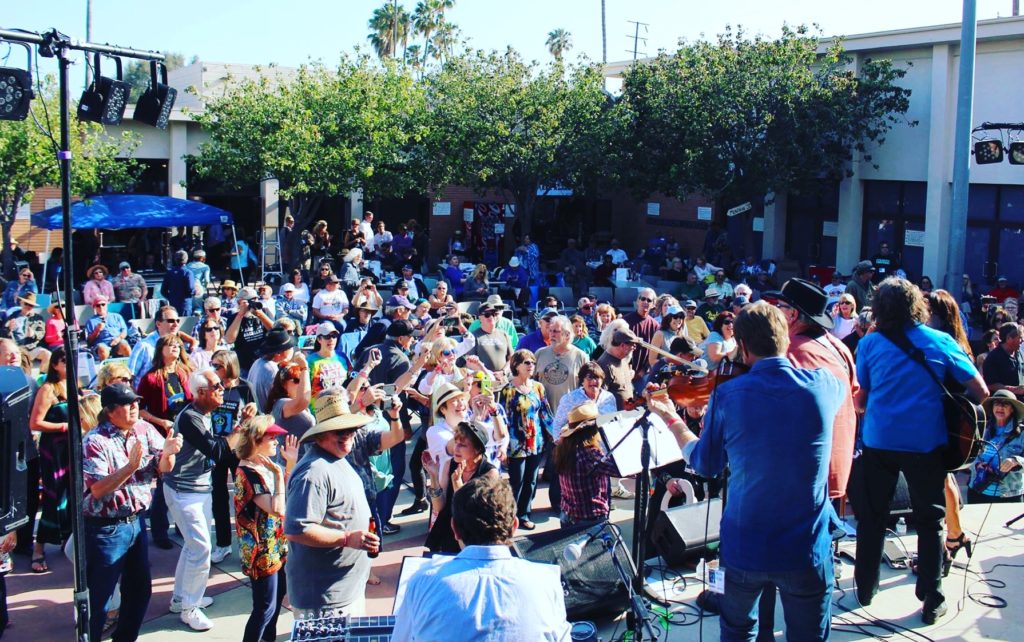 A recent Dylanfest in all its glory

Andy believes he owns a copy of every studio album that Dylan recorded, but admits he comes up short on the many bootleg records, sanctioned or otherwise, that have been released.

However, many of Dylan’s recent albums are comprised of standards made famous by others. Do Andy and Renée consider these fair game for inclusion in the Dylanfest?

Adamantly, the answer is no.

“This comes up, and it’s been contentious sometimes,” Andy says. “Quite a long time ago we decided that we would not do anything that Bob Dylan did not write or co-write. For example, he’s a walking Woody Guthrie jukebox. If you allowed songs that he didn’t write you would now include every one of Guthrie’s songs because Bob Dylan has sung all of them.” Lately he’s been singing Frank Sinatra. “Pretty soon it’s like, well, he knew his neighbor who used to do whatever…” And suddenly we’d have an extra one or two thousand songs and the Dylanfest would have to become a weekly event in order to embrace them all.

“We have to put some parameters on it,” adds Renée, “otherwise it gets a little out of hand. There are so many songs that he’s written, that are great, that it’s not like you’re going to run out of songs to play, even the new ones that don’t get played a lot.” 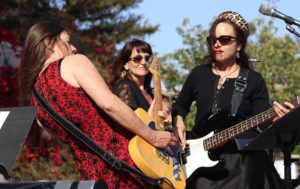 So how does the setup work? There are many, many guest performers, but most of the solo artists who come to play are held to just one song.

“If it’s a band, like a larger ensemble, they’ll usually do two, because it takes longer to set up and break down,” Andy explains. “It’s always a challenge to get as much music in there as we can. Everybody wants to do more, and we’d love to have everybody do more, but it’s a balancing act.”

“As it’s gotten bigger and slightly more well-known,” Renée says, “people who we don’t know contact us to play. They’ll send demos and we’d love to have a whole bunch of new people, but then you’ve got to say no to the people who are great that have been playing for years. We want to be honoring the musicians who play for us, and we want to honor the audience by (adding) some new and interesting bands.”

Among the new acts will be Susie Glaze (of the Susie Glaze New Folk Ensemble), performing “Masters of War,” and the Title Trackers performing “Highway 61.” The latter group creates stylistic parodies, writing and recording non-existent title tracks for albums such as “Exile on Main Street,” “Morrison Hotel,” and “The Joshua Tree.” (Naturally, their first album is called “Lost Title Tracks”)

Additionally, other featured artists include Joel Rafael, Bob Malone, Dave Crossland, Marty Rifkin, and Al Diesan. The latter is set to perform “Love Sick,” another Dylan Song that is making its Dylanfest debut. 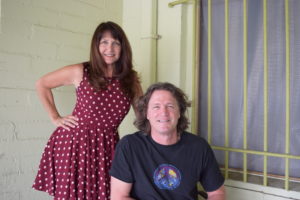 Something else that promises to be quite splendid is a performance of “Blowin’ In The Wind,” supported by a very large contingent of acoustic guitars, with vocals by Renée Safier, but also presented as a giant sing-along.

Well, of course one has to ask, does Bob Dylan himself know about the Dylanfest?

“We have no evidence that that’s the case,” Andy replies.

If he did know, do you think he’d come to the event?

Andy, replying philosophically, says, “If he can’t make time in his schedule to attend the Nobel Prize (reception), it’s kind of questionable if he can make it to Torrance.”

Of course, anything’s possible, right? Someone may even slip him a copy of this article. And if he did show up, I’m guessing he’d be allowed to join in on a song or two.