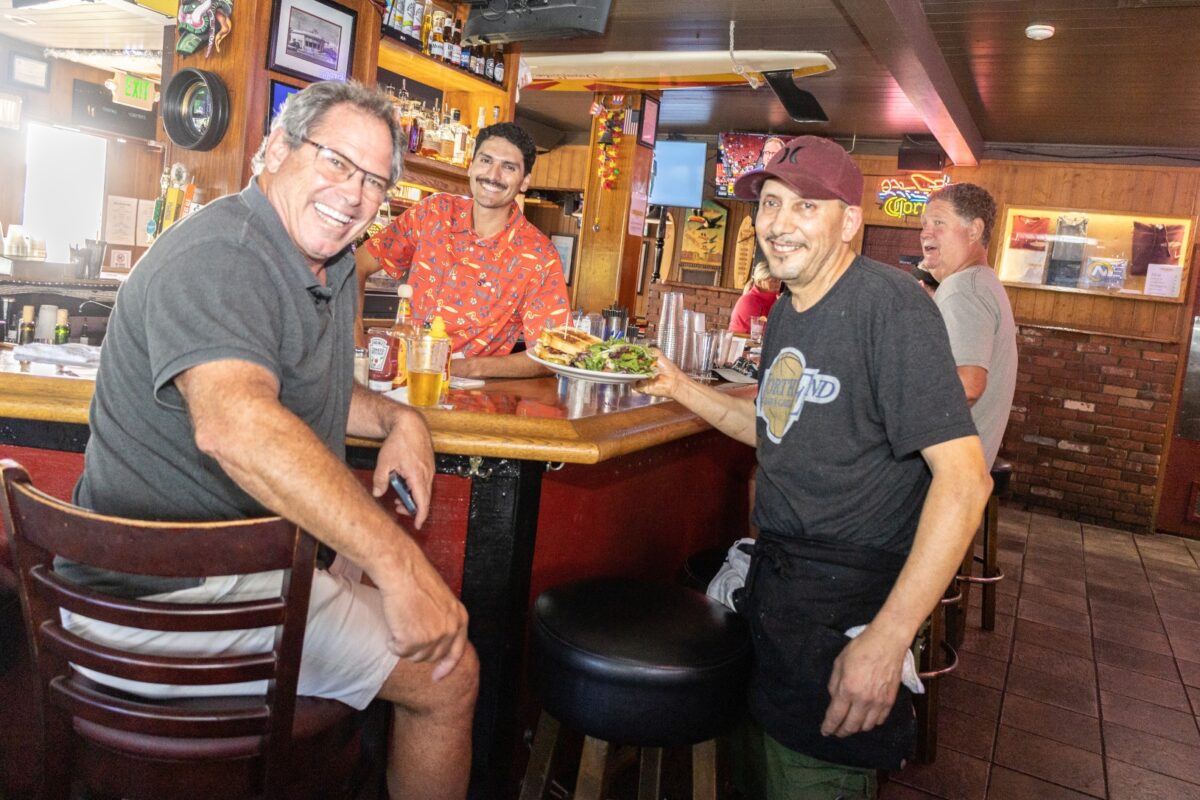 When I consider some dining establishments, I am reminded of Shakespeare’s observation, “There is a tide in the affairs of restaurants, which taken at flood leads on to fortune.” It shows that…excuse me, I just looked at that again and apparently the bard was talking about something else

Where was I? Oh yes, tides of creativity and quality in restaurants, which sometimes ebb and flow. Consider North End in Hermosa (Note, not the identically named place on Highland Avenue in Manhattan Beach). This place was famous as a dive bar and hookup joint called Critters in the ‘70s, changed name to North End, and style to sports bar in 1999, and began a cycle of alternating undistinguished bar food with better fare.

After a start with typical burgers and burritos, a creative chef named Jessica Jordan started innovating on the daily specials, and by 2009 she was offering tostadas with Thai shrimp tempura and wontons, Habanero-peach rack of lamb, frito pie with blueberry guacamole, and other unlikely dishes. She was hired away to open Fishbar, and the food relapsed into adequate, but uninspired bar food.

A reader tipped me off that North End Hermosa is doing interesting things again, but when I looked at their menu on the internet there were few signs of that. The website advised calling about specials, and the person answering the phone started reeling off a list that included blackened mahi mahi, and a Thai-style shrimp wrap. It wasn’t avant-garde but sounded promising, so my wife and I hopped in the car and drove over.

The building has changed very little in the past 40 years, and inside the furniture is worn but clean. We hovered at the door for a while deciding whether to dine inside or out, and saw that the crowd were mostly regulars who knew each other. While we appreciated the cheerful buzz of conversation and music, we decided to dine outside.

Despite the position at an intersection, the patio is relatively quiet because most vehicles are at a distance and nobody’s hitting the gas on this low-speed road. We shared the space with people who brought well-behaved dogs that were also obvious repeat visitors. The service might have been very slightly slower because one of the staff stopped to play with a puppy for a minute or two, but we didn’t.

We had intended to start with chicken tortilla soup and housemade chili, then have a pulled pork sandwich and herb and pepper-roasted salmon, but unfortunately everything arrived at once. This was not what we wanted, and was an aberration in the otherwise very good service. We ended up eating our dinner backwards because the pulled pork and fish would cool more quickly than the chili and soup.

The pulled pork didn’t have the smokiness that you get when this is made on the grill, and I suspect it was cooked in an oven or crockpot. Both methods can yield very tender meat with a concentrated porkiness, and that’s what was on offer here. Pulled pork sandwiches are too often served drenched in sauce, which was not the case here, but I would have liked some with a dash of vinegar and heat to balance the richness of the meat. In parts of the South pulled pork is served with cole slaw or pickles to get that effect, and there were sliced pickles here. This was pretty good, but I still prefer pulled pork that has spent some quality time in a smoker.

The salmon was even better, a good-sized piece of fish cooked so the edges were just a bit crisp, the center very moist. It came with spinach that was lightly cooked and lemony and mashed potatoes, and was a classic meal well made.

The evening was developing a chill so the chili and soups were welcome, and both hit the spot. The chili was meaty, and not very spicy, thick with a nicely complex flavor with cumin and oregano. The chicken tortilla soup was even better, citrus and spice balanced in the broth, onions, peppers, and chicken all adding their flavors. Like the rest of the meal it was comfort food, but with distinct touches of homemade goodness.

The Cream’wich brand of ice cream sandwiches are offered for dessert, which is significant because they’re locally made by Jessica who once worked here as a chef. We thought about getting one but ended up sitting over our drinks instead. North End Hermosa is not a mixology place, but makes simple drinks well using standard ingredients. This might be referred to as a liquid expression of comfort food, and we sipped our Manhattan and Old Fashioned and enjoyed the sociable atmosphere of people and dogs before heading home.

We were back that weekend for brunch, and the specials made for a hard decision. We eyed the chorizo avocado breakfast quesadilla, and the carnitas omelet, but settled on a machaca breakfast burrito and a crabcake benedict. We considered sitting inside this time because they had a delightful soundtrack of 1930s big band music, but on a sunny morning the patio was just too enticing. We compromised by getting the table closest to the door so we could still enjoy the music. 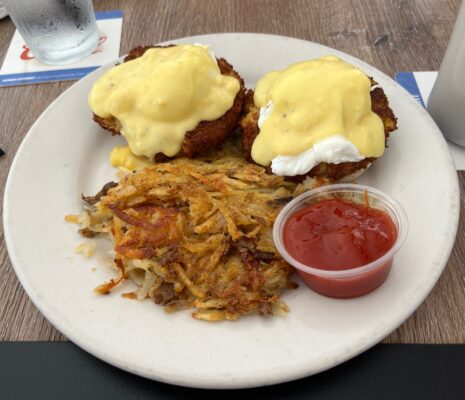 A crabcake Benedict at North End in Hermosa. Photo by Richard Foss

The machaca burrito was generously sized and a bit mild for my tastes – I anointed it with salsa, and if I order another I will ask them to put some inside. We were happier with the crabcake benedict, two crisply fried patties on split halves of English muffin topped with poached eggs and hollandaise. The crabcakes were West Coast style, without Old Bay or Louisiana seasoning, catering to those who enjoy the taste of seafood with little adornment. I prefer at least a dash of seasoning, but have to admit that these were good. The accompanying hashed browns were a surprise because they had an undertone of peppery heat, though not so much that my wife couldn’t enjoy them. The crabcake benedict was fourteen bucks and the most expensive thing on the menu, but that’s modest for anything with a generous amount of an expensive ingredient.

We decided to forego cocktails and just had coffee, with a small shot of Irish whisky in one of them to celebrate the weekend. No espressos or fancy drinks are available, and as much as I like those to start the morning they’d be out of place here. North End is a place for simple pleasures, quite different from the place where I once enjoyed a tempura watermelon and gorgonzola salad, but with virtues worth appreciating.