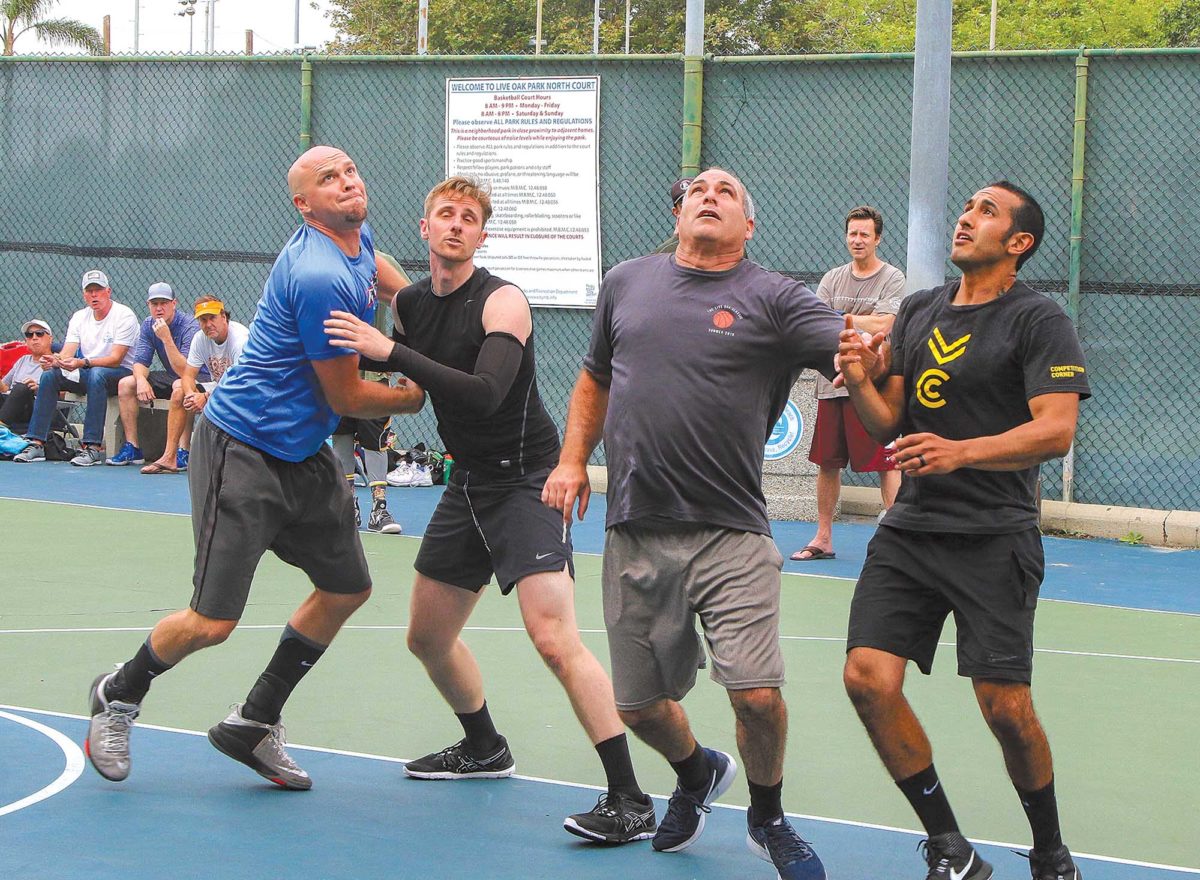 They achieved legendary status by pulling off the most improbable hoops comeback since the Cleveland Cavaliers clawed back from a 3-1 deficit to beat the Golden State Warriors in the 2016 NBA Finals.

Of course, that comeback was led by some 6-foot-8 bruiser named LeBron, with backup from two pretty good ballers named Kyrie and Kevin. This one was led by a speedy 5-foot-7 defensive dynamo with the nickname Turbo. A guy who still wears retro-cool all-white Chuck Taylor sneakers in the Age of multi-hued Air Jordans.

In the long and glorious history of the annual Live Oak 3-on-3 hoops tournament, this victory will go down as one of the most memorable if only because of the long and winding trail Turbo’s team took on its way to the traditional Shellback Tavern victory celebration. 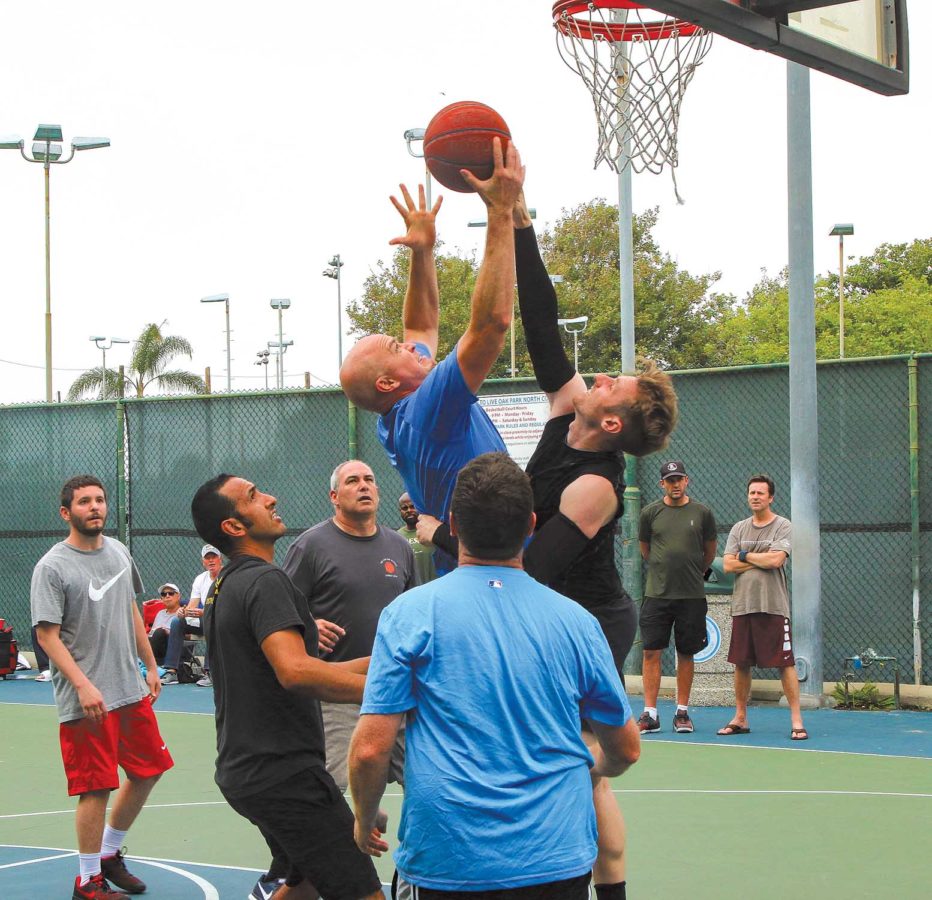 Not only were they the first team in recent memory to emerge from the consolation bracket and actually win the tournament, but they faced imminent elimination seven times — and seven times they blocked the other team from scoring and eventually hit a bucket to keep their desperate comeback going.

Making it even more unlikely: It was also the first time the three had ever played together. Thanks to the usual last-minute roster shuffling and “I know a guy” substitutions, “Jersey Joe” Fortino met his new teammates – Jake “The Kid” Allan and Sam “Turbo” Morrison — only minutes before they started play. The Kid and Turbo, both 25, had played some intramural college games together at Colorado. But 31-year-old Jersey Joe, most recently from Orange County, laid eyes on them for the first time Friday afternoon as they warmed up.

Then they lost their first game – “We had to work out the getting-to-know-you jitters,” Allan said – to drop into the consolation bracket right away.

But they began to fight their way through that bracket, knowing that they could still make it to the finals if they didn’t lose another game. “After that first game we started to develop instant chemistry,” Jersey Joe said. Their roles quickly became clear: Joe provided the in-the-paint muscle, Jake the perimeter shooting and Turbo the in-your-grille defensive ability to shut down anyone under 6 feet.

On the four-hour journey to that epic championship game, friends, fans and family ringing the court were treated to all the familiar sights that happen when surging adrenaline meets unforgiving asphalt baking under a hot sun: out-of-shape bodies slamming to the court without a foul being called, passionate arguments that never quite escalate to assaults, and even one pair of brothers arguing more with each other than with their opponents.

The ultra-competitive tone was set early when Scotty “Syracuse” Talbot, Jeff “Commish” Goldstein and Kyle “CPA” Burgoyne prevailed in a brutal battle over Dangerous Dave Sherwood, Wisconsin Ray, and Chris “C-Pal” Palisan. “This is like watching the Bad Boy Detroit Pistons play the Bad Boy Detroit Pistons,” Johnny Labella yelled from the sidelines, one of a stream of snarky comments he let fly while serving time on the injured list. 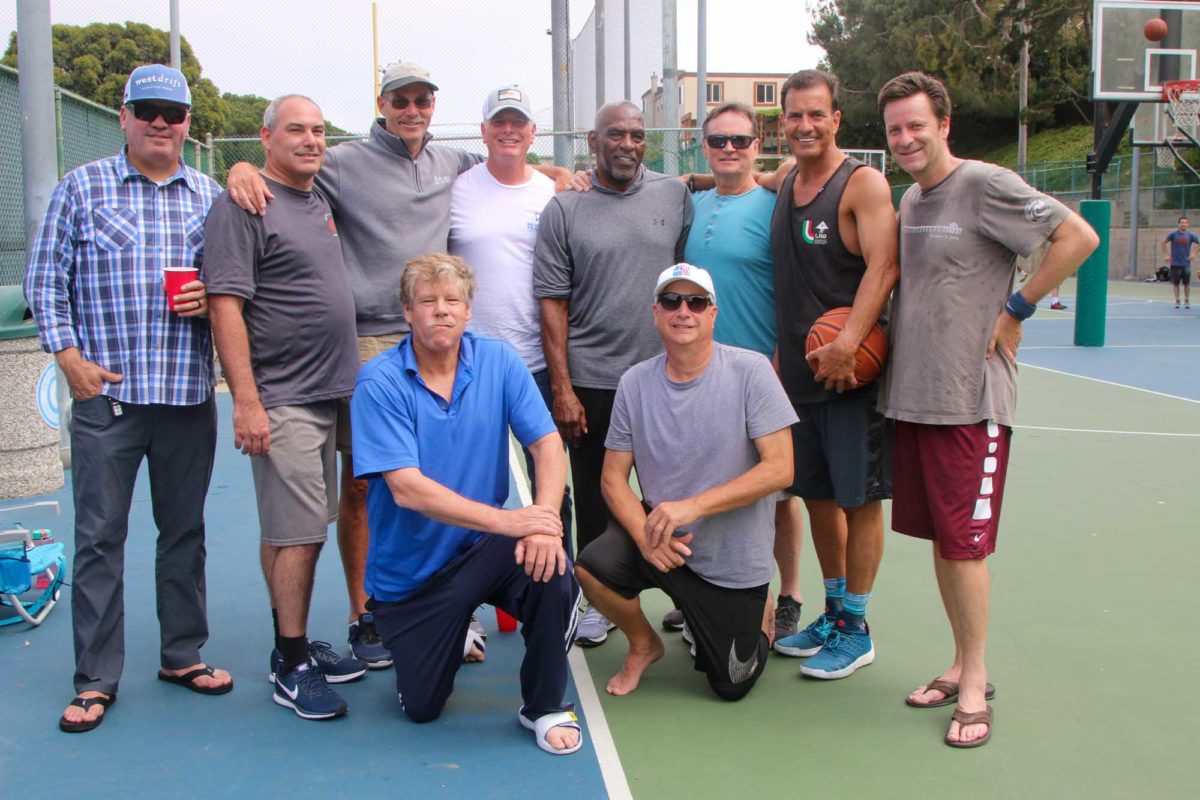 While the victory was well-earned, with CPA Kyle hitting a clutch foul-line jumper for the win, it’s destined to go down in Live Oak lore because of an incident that happened mid-way through the blood-bath. As CPA turned the corner and headed to the south hoop for an easy bucket, two-time Live Oak champion C-Pal suddenly called out to stop play because someone from the north hoop had crossed the mid-court line. The intruder was still 30 feet from the south-hoop action, but C-Pal deemed it enough of a distraction to warrant a stoppage of play and nullify the bucket. Led by a sharp protest from Syracuse Scotty, the Greek Chorus on the side-line loudly mocked the dubious call.

But C-Pal stuck to his guns after the game was over. “He came on the court at least 3 seconds before the bucket, so I made the call in plenty of time,” he said. “And I would make it again in the same circumstances.” However, time wasn’t the real issue. The issue was that the so-called “distraction” was so far away he was the only one who actually noticed it in the heat of battle. But in true Live Oak spirit, it ended up all good as long-time friends Scotty and C-Pal shook hands and made up after the game. At least, that’s what they told the local press.

Meanwhile, the squabbling Saldana siblings, Claudio “The Bulldozer” and his big brother Caesar “the Butcher,” started arguing right on schedule over who was responsible for several bad passes and missed lay-up opportunities. Their teammate Jason “Swish” Geno was shooting the lights out but couldn’t lift the Battling Bickersons to victory

Other highlights included Phat Phil Ortiz draining a couple of 30-foot 3-pointers. Apparently, no one told him all baskets counted for one point. He was also noticeable because he actually made an effort at stopping his man on defense, something he never does the other 364 days of the year.

The tournament started at noon. As the clock approached 5 p.m., the finals match-up was finally set: “Jersey Joe,” “The Kid” and “Turbo,” we’re taking on the undefeated team led by “Big Ben” Wood, “CrossFit” Jake Delgado, the best conditioned athlete on the court, and Kurt “Blake’s Brother” Hamilton, a skilled shooter but not as skilled as his brother, Blake “Bank Shot” Hamilton. 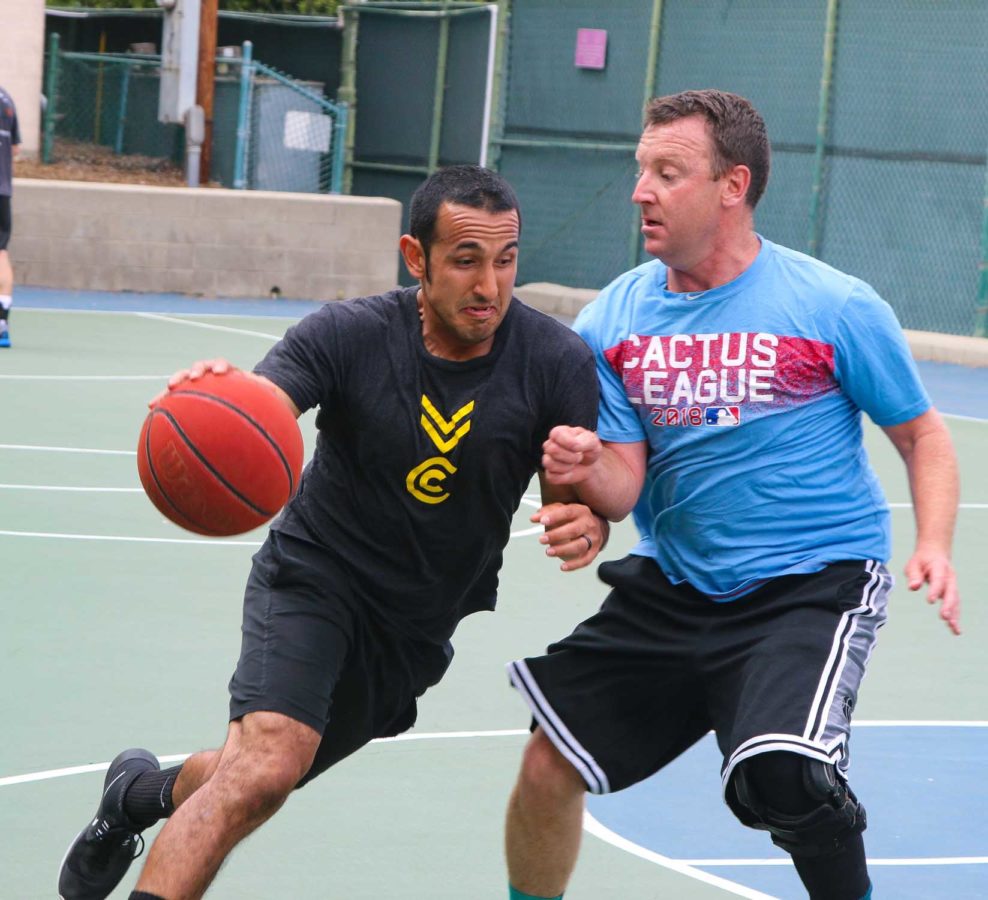 “Big Ben’s” team was heavily favored. Not only were they undefeated, but the muscular, “Big Ben” had been the most dominant player on the court, “CrossFit” Jake was a ferocious defender with a dependable jump shot, and Kurt had displayed a smooth, reliable jumper all day.

For the first time since their first game loss, “Jersey,” “Kid” and “Turbo” lost that that chemistry feeling had carried them so far. “Jersey” looked over-matched trying to stop the “Big Ben,” “The Kid” was missing shot after mid-range shot, and “Turbo” was concentrating on defense and letting the other two take most of the shots.

On the other side, “Big Ben” was continuing his dominance, hitting the first three buckets, two of them stick-backs where he just over-powered “Jersey Joe.” “CrossFit” hit a snaky drive, Ben drilled a short turn-around, and “CrossFit” snuck in for another couple of drives. Suddenly it was 7-0 and the consensus on the sideline was clear: this game was over. 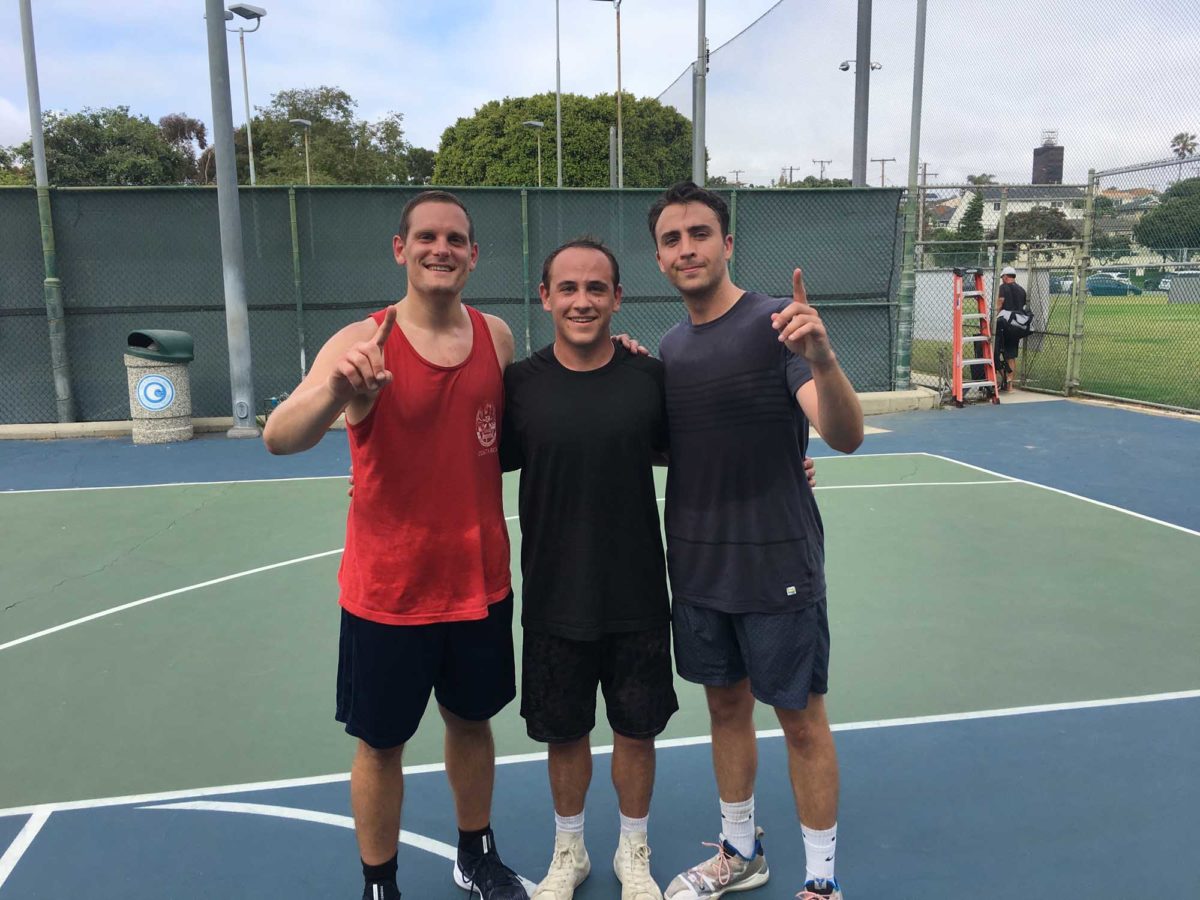 The Consolation Kids, “Jersey Joe, “The Kid” and “Turbo.” Photo by Jeff Goldstein”

Then “Turbo” swished a 10-foot sideline J, and Jake chipped in with a short jumper to make it 7-2 (single point scoring). “Big Ben” came back with two more stick-backs, and soon it was 10-4. Ben’s team was one point from victory.

That’s when the magic started and the “Kid’s” touch returned.

In rapid succession “The Kid” nailed a 12-footer, a 10-footer, a short turn-around, and another 12-footer. When “Jersey” drove the baseline for a reverse layup it was suddenly 10-9. With “Turbo” forcing Kurt into longer and longer shots that missed, Jake drilled an 8-foot jumper and “Jersey” finished off the miracle comeback with a foul-line jumper that drove the crowd into hysterics. What had looked like a snoozer of finals just moments earlier now promised a dramatic ending — either way.

The winner-takes-all game started the same way as the previous game: “Big Ben” dominated the paint area and led his team to a 3-1 lead.

But “The Kid” responded with a power drive followed by a 10-foot jumper to level the score 3-3. “Turbo,” realizing he had worn down his man Kurt, exploded for two quick drives to the hoop and a 5-3 lead. It was a lead they never relinquished: “Jersey” had a stick-back, “The Kid” drilled a 10-foot baseline jumper, “Turbo” had another quick drive and “The Kid” added another 15-foot shot to pump the lead up to 9-4. “CrossFit” responded with two power drives and then stole the ball and scored to make it 9-7. But that was their last gasp. “Turbo” unleashed another baseline drive and “Jersey Joe” finished the improbable comeback with a foul-line jumper that somehow seemed inevitable by that point.

After they all shook hands, “The Kid” fell to the ground and sprawled out his arms and legs. “I think I’m going to pass out,” he said. But soon the adrenaline kicked back in and they were on their way to the Shellback, where they received congratulations – and free drinks – far into the night.

They knew they had seen something memorable. And they knew they would have to make room for three new Live Oak Legends: “Jersey Joe,” “the Kid” and “Turbo.”