“Cop Secret,” writer/director Hannes Thor Halldorsson feature debut, comes at you like the force of the muscle car driven recklessly at hypersonic speeds across the streets of Reykjavik by super cop Bussi. Along for the ride, white knuckles on the dashboard and his toddler in the back seat, is Klemenz, his terrified, rule-following partner. They are pursuing a bank robber on a turbocharged motorcycle and are momentarily slowed when entering the bordering suburban jurisdiction controlled by another super cop, Hördur. 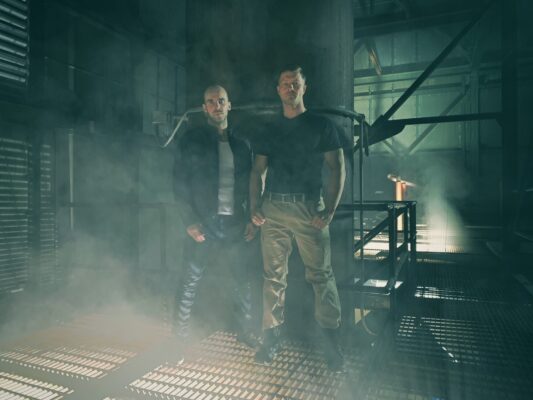 Professionally speaking, it’s the equivalent of the inner city vs. Beverly Hills. Bussi, fond of jeans and torn wife-beaters, is the antithesis of Hördur, the independently wealthy, bespoke suit-wearing former international model. Bussi seethes with resentment but is curiously attracted. Unfortunately, both lose the bank robber in the moments wasted in the jurisdictional dispute.

Klemenz has had enough. His nerves won’t take it. He needs rules, he needs cooperation, he needs a better partner, and he needs a raise. The chief, seasoned, hard-nosed, and politically astute, gives him a desk job but she won’t discipline Bussi. He’s their bread and butter and the tabloids eat him up. What she can’t get a handle on is the series of apparent bank robberies that have been taking place all over town that week. A gang has been staging break-ins but steal nothing. She decides on a new course of action. They will consolidate the suburban police department with hers and unite the two super cops as partners. Bussi is none too happy about this; Hördur is curiously pleased.

Steinunn Ólína Þorsteinsdóttir as the Chief of Police in “Cop Secret.” Photo courtesy of Pegasus Pictures.

They make a good, professional team. Hördur gets a lead on the team staging the break-ins when he recognizes Rikki, a former friend from his modeling days. Rikki, whose career ended in a freak fire, is now a master criminal. Hördur also has a bead on Bussi. He suspects the attraction is mutual, although Bussi is resisting his every interior urge. Even his girlfriend knows what he refuses to acknowledge about himself.

This Icelandic cop bromance is a laugh-out-loud lampoon of every American buddy cop show you can think of. Haldorsson has clearly watched a lot of American television, especially those 70s and 80s schlockers like “Starsky and Hutch,” “Chips,” and “Hunter.” The lone wolf cop is a stalwart of television and film and here he takes the lone wolf and amplifies him through a telephoto lens. Bussi is macho to the nth degree; Hördur is his antithesis in savoir faire. Bussi lives in a hovel; Hördur in a modern mansion by the sea. If opposites attract, you should be able to see this one coming from a kilometer away.

Lots of shooting, lots of punches thrown, lots of bad guys (and a woman more lethal than any of the men), and a few twists along the way (although all of them are set ups with punchlines you can see coming, it only increases the fun). Yes, it’s fun. In a way, Haldorsson has created his own sendup of a Marvel-type superhero movie with the requisite cartoon violence where only the bad guys get blown away.

Of course there’s a tech geek, a woman capable of retrieving data from a burned and melted memory stick, and last, but certainly not least, Haldorsson, the Icelandic national soccer team goalkeeper, makes the National Women’s Soccer team match against England a plot point.

Suspend belief because there’s nothing remotely believable in any of Halldorsson send up and just prepare to be thoroughly entertained.

You won’t know any of the actors but they are so good you’ll want to see them again. They enhance the film and their performances by playing everything straight. There are no wink-winks, just acting that pays homage to all the characters that came before. Halldorsson movie is a great addition to the films of Simon Pegg and Edgar Wright, especially that classic of deliberate understatement “Hot Fuzz.”

Let this wonderful comedy take you by surprise. It really is a “Cop Secret.”

In Icelandic with English subtitles.

Opening July 8 at the Laemmle Glendale and July 12 On Demand.