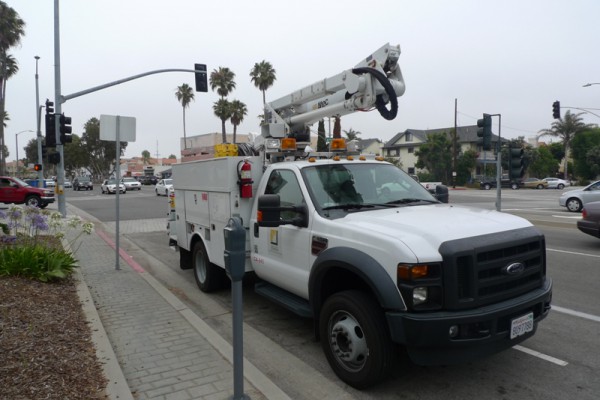 A Southern California Edison truck in the South Bay. Photo by Chelsea Sektnan

Planned maintenance of the electrical grid in Hermosa Beach, which would have temporarily shut down power in part of the city, will not take place until after the novel coronavirus pandemic has ended.

In a statement issued March 20, Southern California Edison said that it planned to “postpone noncritical planned projects, while only continuing with those related to emergency, public safety and wildfire mitigation work.” Power providers are among the “essential” services that will continue to operate amid broad shutdowns of other sectors of the economy to limit the number of cases of COVID-19, the disease caused by the coronavirus.

Some Hermosa residents in the city had received phone calls and mailed notices earlier this month from Southern California Edison indicating that their power would be shut off from 8 a.m. to 4 p.m. on March 25. The utility typically schedules outages at this time in order to limit inconvenience for its customers, because most are away at work. But with businesses shuttered at the behest of state and local government, and people spending much of their time inside after the county’s “Safer at Home” order, residents blanched at the prospect of being cooped up without light and functioning appliances, to say nothing of Netflix and Hulu.

“Now, with schools out and restaurants closed, no resident should be without electricity for any reason,” resident Gary Brown, who lives in Hermosa’s sand section, wrote in an email to the Easy Reader.

Southern California had previously said, on March 13, that all service disconnections for failure to pay electricity bills would be suspended until after the crisis had lifted.