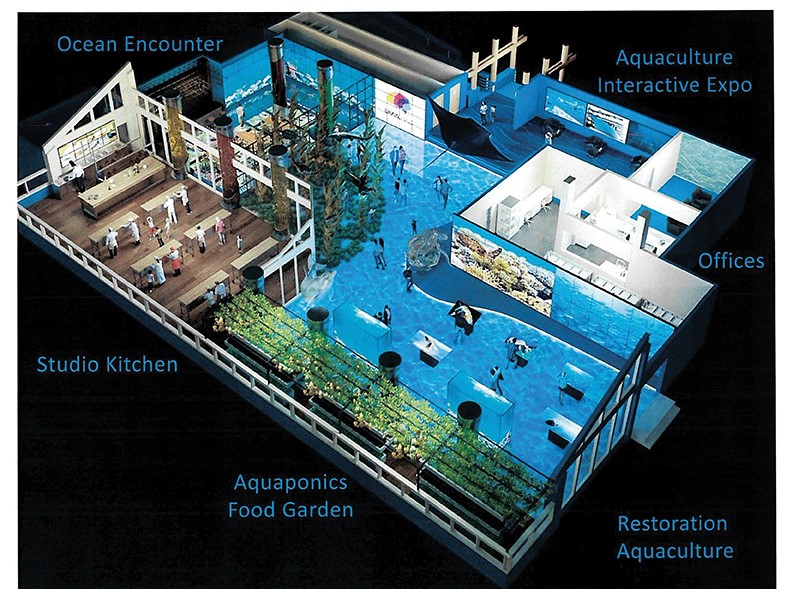 A concept illustration of the interior of Ocean Encounters, proposed for the Redondo Beach waterfront. Courtesy Harbor Commission

The Redondo Beach city council approved, in concept, Tuesday night an educational facility for the waterfront.

“Ocean Encounters” is the umbrella idea, brought to the city by Tom Grimm, owner of Carlsbad Aquafarm, which grows oysters and mussels near San Diego.

Grimm’s concept for King Harbor includes a building to house aquaculture, aquaponics, augmented reality, a studio and broadcast kitchen, an outlet for ocean activity and representation of Pacific Rim cultures.

He explained further Tuesday night before the city council’s 5-0 vote.

Included in the city council’s approval was that the venture should incorporate the harbor’s existing Waterfront Education program, white shark studies by Cal-State Long Beach and perhaps more.

“The idea of collaborating with local talent is fundamental to our thinking,” Grimm said.

As Mayor Bill Brand recounted, he was referred to Grimm by King Harbor lessee Dr. Allen Ginsburg, who expressed concerns about water quality in the marina.

Brand called Grimm and soon went down to visit his aquafarm.

Grimm later presented his ideas for an educational facility at Redondo Beach to the Harbor Commission.

“I think, potentially, this could be quite world-class,” said City Manager Mike Witzansky, giving his recommendation to the council Tuesday night.

During the meeting, Grimm told the council of a 15-member leadership team he has put together for the non-profit “Ocean Encounters,” including representatives from a list of academic institutions and even a marine drone expert.

The site would be where Joe’s Crab Shack is – either in the existing building which the city owns, or a new building.

He talked about kelp reforestation.

“You walk into these kelp forests as an avatar,” he said.

He told of how kids could use marine drones.

“The headsets, when you put them on, make you essentially a fish,” he said.

Specifics of the project drew some questions from the city council.

“The last thing kids need to look at is another screen when they come to the ocean,” said Councilman Zein Obagi, Jr.

Councilmembers Nils Nehrenheim and Christian Horvath led the call to be sure local groups are included.

Earlier, Grimm noted that the studio kitchen, for classes and broadcasts about preparing seafood, may help with maintenance costs.

“We stage and broadcast programs that can generate meaningful revenue,” said Grimm.

Mayor Brand talked about the importance of the hands-on aspects of the concept.

“What’s driving me and several others is the opportunity of serving disadvantaged kids from greater Los Angeles,” Brand said.

City Manager Witzansky spoke of how the project can evolve, that it would not be a static attraction.

“The sky’s the limit on what we could ultimately implement,” he said.

Any final plans or construction would need to be approved by the Coastal Commission.

“I will tell you, I’m enthralled with everyone I’ve met in this amazing city of Redondo Beach,” said Grimm. “… This is the greatest place you could possibly do this project.”

Julie Coll, of Waterfront Education, spoke Tuesday to the city council too, as well as Roger Carlson of the Harbor Commission, both at the request of City Councilman Todd Loewenstein.

“What excites me… how do we get the kid in Nebraska excited about the ocean,” Coll said. “(This) can get us beyond California. My passion is the science of the sea – wind, waves, weather, fog, the chemistry…”

Carlson concurred with much of what he heard Tuesday, and has heard through the winter and spring.

“I definitely think this is worth pursuing,” he said. “… Fill it with good local content, great local science.”