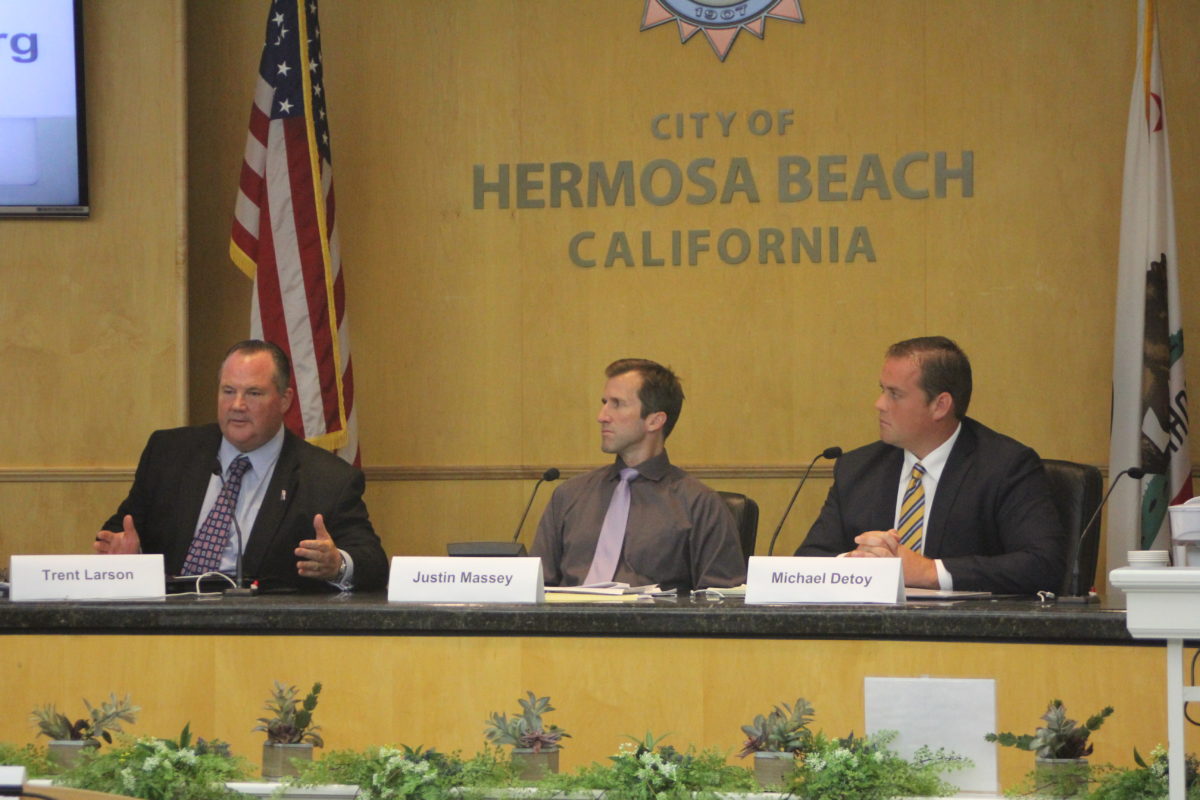 The record of the last four years emerged as the dividing line for City Council candidates Monday night in the first debate of Hermosa’s election season.

The debate, moderated by Al Benson of the Hermosa Beach Neighborhood Association and held at Hermosa City Hall, featured three candidates running for two open slots on the Hermosa Beach City Council in the upcoming November election. Incumbent Justin Massey frequently pointed to accomplishments of the council cohort that he joined in November 2015, and candidate Michael Detoy was similarly complimentary. Candidate Trent Larson, meanwhile, promised a firmer break, criticizing action or lack of action on staffing, infrastructure, and the environment.

Larson promised a back-to-basics agenda focused on the city’s physical plant, and said that staff frequently had a “tin ear” for the concerns of Hermosa’s local businesses. He pointed to large losses businesses suffered during the recent Teen Choice Awards, and what he described as an overzealous approach to code enforcement.

“You stick a sandwich board outside your business and you’re getting a ticket,” Larson complained at one point.

The focus on the existing council produced occasional barbs between Larson and Massey, who spent much of the evening defending progress of the last four years. At one point, after Larson described Hermosa’s exploration of joining a Community Choice Aggregation — an agreement under which cities purchase power from fossil fuel alternatives delivered over the existing grid — as equivalent to starting a power company, Massey said the criticism was baseless, “unless of course your traffic in conspiracy theories.”

But the candidates also made a point of conducting a civil campaign, saying that they would discourage their supporters from attacking the other candidates on social media.

Detoy, for his part, also showed an occasional willingness to break from the current regime. He said that, “if budget allowed,” City Hall should be at least partially reopened on Fridays. And he said that, had he been on the council, he would have voted against creating a deputy city manager position as part of the most recent budget cycle; Detoy said he would have preferred to spend the money on an economic development director, and he criticized the way the Teen Choice Awards were handled in the process.

“We definitely have to ring in our summer events, and make sure that our local businesses, especially on lower Pier [Avenue] don’t lose hundreds of thousands of dollars in one weekend,” Detoy said.

Massey was part of the 4-1 majority that approved the creation of the new position, which at the time he said would allow staff to achieve some of the same topics at issue in the campaign, including years of deferred maintenance to streets, sewers, and sidewalks.

Larson argued that taxpayer money was being “frittered away and used unproductively.” Defending the decision put Massey in the familiar position of asserting that issues the council dealt with were more complicated than they might seem. Decisions about staffing, he said, depend not just on votes made by the City Council, but on negotiations and pre-existing contracts with labor unions representing city employees.

But Massey also showed occasional willingness to own up to mistakes. He said that the decision to pursue a stormwater infiltration project on the Greenbelt in Hermosa, which was made before he joined the council, should have considered Hermosa’s relatively small contribution to the watershed the project served. And like both Detoy and Larson, he said that subsequent councils should have communicated more effectively with residents on the subject. Responding to a question about historic structures downtown, he said that resident outrage to an initial draft of the city’s General Plan convinced him of the importance of a lighter touch on issues people perceive to be affecting property rights.

“Having lived through PLAN Hermosa and the debate that we had on historic preservation, primarily focused on residential, what I can tell you is that incentives to preserve are the right way to go rather than mandatory requirements,” Massey said.

The next debate, sponsored by the League of Women Voters, will take place Monday night, and a third debate, put on by Leadership Hermosa, will take place Oct. 16. Both debates will start at 7 p.m. at City Hall.