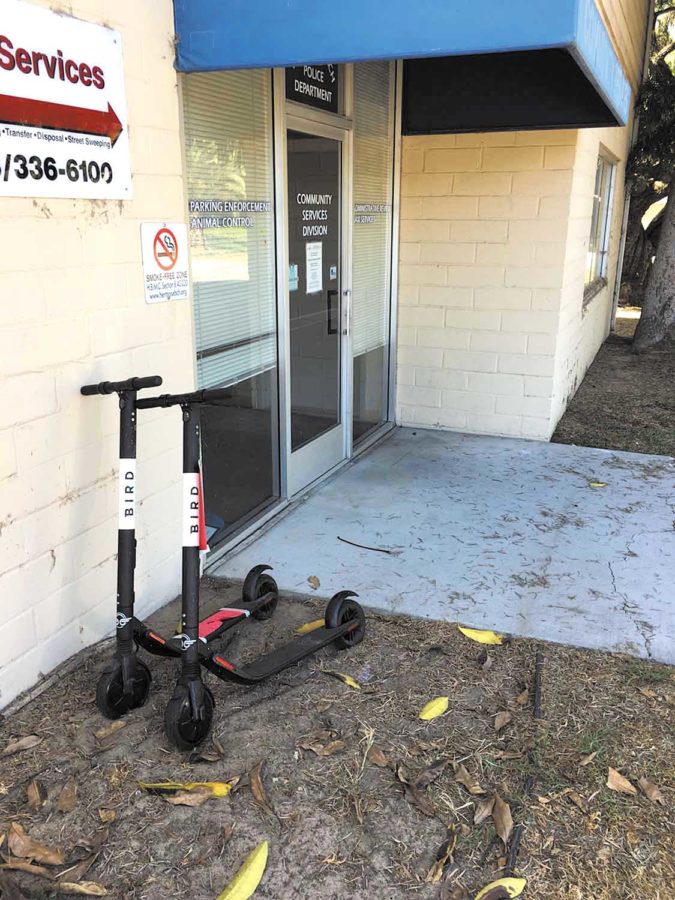 A pair of Bird Scooters are left parked outside the Hermosa Beach Code Enforcement office. Photo

Citing concerns about safety, obstruction and potential impacts on its neighboring cities, the Hermosa Beach City Council voted Tuesday night to extend its existing ban on dockless shared mobility devices, including the popular Bird scooters, for another year.

The 4 to 1 vote, with Mayor pro tem Justin Massey the lone dissenter, will maintain a ban that began in August 2018 until March 2021. Although the ban does not prevent riders of the devices from entering the city boundaries, or leaving them there when finished with a ride, it does prohibit companies from deploying them there, or people from picking up and beginning a ride within the city.

So-called “dockless” micro-mobility devices are typically rented through a smartphone app, with riders paying a flat fee and an amount based on distance. Unlike their docked counterparts, which are rented from and returned to fixed locations, they may be left just about anywhere, waiting to be picked up by the next rider. Advocates say that widely distributed electric scooters like those offered by Bird can help close the vexing “first mile, last mile” problem: the challenge planners face in getting people to more widely use public transit when major bus and rail lines begin and end at points that are too far from a rider’s starting point and destination to encourage convenient use.

But since the devices first began emerging in 2017 and 2018, they have created headaches for cities in which they appear. Emboldened riders operate in a gray zone outside of state motor vehicle regulations, often zipping by on sidewalks and jostling pedestrians. Almost all riders are helmetless, and the devices have been linked to a surge of emergency room visits. And the device’s key selling point, the convenience of leaving them anywhere, has led to nuisance situations in which the devices obscure walkways and compromise access for the disabled.

“They don’t serve a purpose. The clutter the sidewalks. We just don’t have the capacity here in Hermosa Beach,” said Councilmember Stacey Armato, who voted with the majority for a year-long ban, but made clear that she would have preferred an indefinite one. Citing her experience at her job in west Los Angeles, where the company is allowed to operate, Armato told a Bird representative at the meeting that the company needed to do a better job of addressing issues in the places where it is currently permitted before “infiltrating” other cities.

While scooter companies have obtained permission to operate in parts of some cities, including Los Angeles and Santa Monica, other cities have prohibited them. That includes Manhattan Beach, which instituted an indefinite ban on dockless micro-mobility devices last month.

When Hermosa’s council last took up the issue, in December of last year, staff were in the process of exploring a joint effort with Manhattan and Redondo Beach to regulate the devices’ use, in part because a rider in one city could easily visit the other two. Along with Manhattan’s action last month, staff in Redondo have indicated that the city is also leaning toward an indefinite ban of the devices, said Leeanne Singleton, an environmental analyst for Hermosa. The sentiments from the other cities made councilmembers hesitant to act unilaterally, nervous about the prospect of devices piling up on the borders of cities that have banned them.

Morgan Roth, Bird’s community relations manager for Los Angeles County, pleaded with the council to be more flexible. He said that the company was exploring ways to limit the quality-of-life impacts of the devices, including programs that would incentivize riders to leave the devices in designated areas, possibly through free or reduced-price rides. The company also has the ability to “geofence” certain areas, to prohibit people from riding in them or prevent users from completing a ride in a particular area, but said that such technology was impractical to implement on a city-wide basis.

Steve Collins, co-owner of Hermosa Cyclery, has consistently spoken out against dockless scooters and bike shares, noting that the services would cripple the brick-and-mortar bike rental business, which he said is primarily run by mom-and-pop operators. Collins said that, while the scooters seemed for a while to have the same momentum of inevitability as ride-hailing services like Uber — with which they shared an ask-for-forgiveness-not-permission ethos — cities were cracking down in response to complaints.

“Maybe its day has come where it will just survive in large cities and not be a part of a small community like ours,” he said.