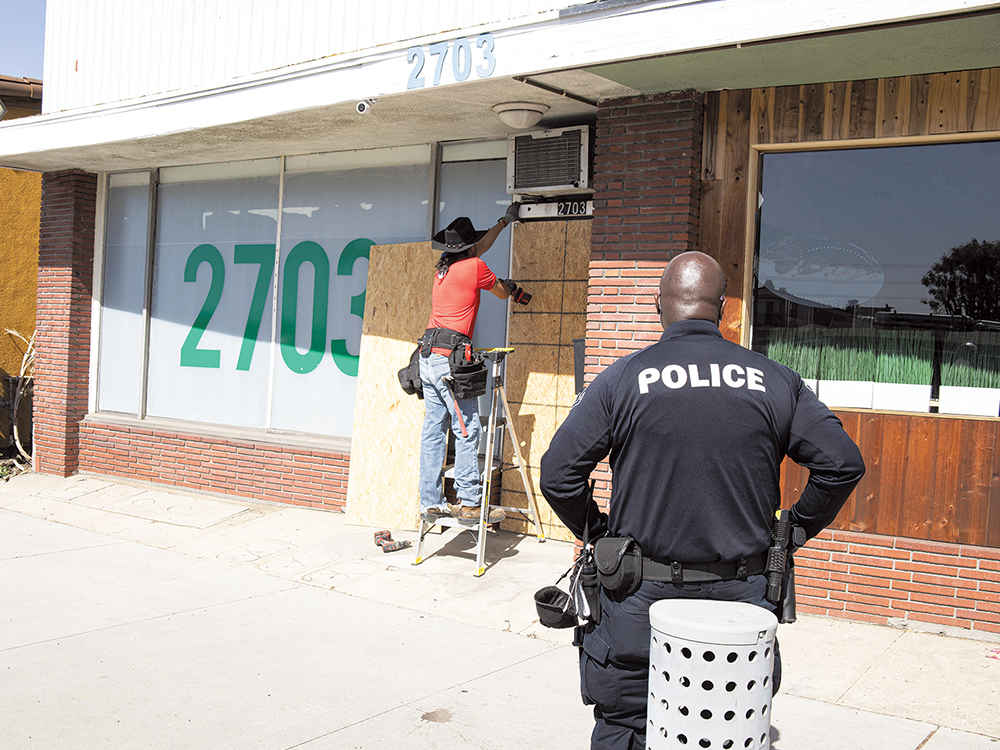 A Redondo Beach marijuana shop is boarded up by police in December 2020. Retail cannabis sales in the three beach cities will be legal if voters approve measures on ballots on October 19 and November 8. Redondo's ordinance allowing two cannabis stores will remain in effect if the Redondo cannabis ballot measure fails. Photo by Kevin Cody

On a 4-1 vote Jan. 18, the Redondo Beach City Council approved a motion to direct the Planning Commission to draft an ordinance that would allow two cannabis retailers in Redondo, impose a five percent fee on cannabis sales and restrict the locations where the stores could be located. Councilmember Nils Nehrenheim cast the dissenting vote.

“Off to the planning commission, and back to us in a few months,” said Mayor Bill Brand.

The cannabis ordinance contemplated by the council would not require voter approval, but would offer voters an alternative to the initiative ordinance.

“We have not solicited enough feedback from the residents. Knowing what the residents want in their city is important,” Obagi said. “Personally, I’d rather there be no sites,” he added.

Obagi is an attorney who specializes in cannabis law.

Councilmember Todd Loewenstein said buffer zones should include not just schools, but also where children live.

“I’m not even sure people want this in our town, especially near their homes,” Loewenstein said.

“We’ve had the opportunity to talk about this with residents for months,” he said. “I don’t want to see us wait another six months to take action. We’re up against the gun,” referring to the cannabis ballot initiative.

Horvath proposed one cannabis retailer in North Redondo, and one in South Redondo.

He shared the results of a poll he conducted on Survey Money, which received 482 responses.

In response to how many stores residents wanted, 33 percent said “none.” A total of 65 percent said they wanted between one and four stores, or that the number of stores “doesn’t matter.”

Last October, the Redondo Beach City Council voted 5-0 to accept the recommendations of its Cannabis Steering Committee, to ask City Attorney Michael Webb to draft an ordinance, for up to two stores, with a five percent tax to go to the city general fund.

“(Residents) don’t want to see an initiative create policy,” Councilman Horvath said this week. “It doesn’t have a tax.”

Initiative backers Elliott Lewis and Martin say the lack of a tax in their initiative was by design.

“The city council needs to be working on a tax,” Martin said. “That’s what they need to be talking about. We deferred it to them. We want a tax, we just thought it was a waste of time not to work with them on it. We’re giving them the ball to run with the tax.”

“We want the city to have their cut,” said, the co-founder of EDRCSC and Catalyst Cannabis Co..

If the council approves  an ordinance to allow retail cannabis stores, residents would still vote on the initiative.

“We’re not making this decision in a vacuum,” Horvath said. “It’s coming. It’s coming to every city. Do you want to have control over it or hand it over to some special interest, someone making millions off it?”

Martin, who wrote the initiative, disputed whether the city can come up with a better way to introduce retail cannabis to Redondo Beach.

“Their policy is not as high standard as our measure,” said Martin.

“The city council is trying to pretend our measure doesn’t exist,” he added. ”So to me the measure is part of the conversation. Instead of being mad about it, they should be thankful for it.” ER