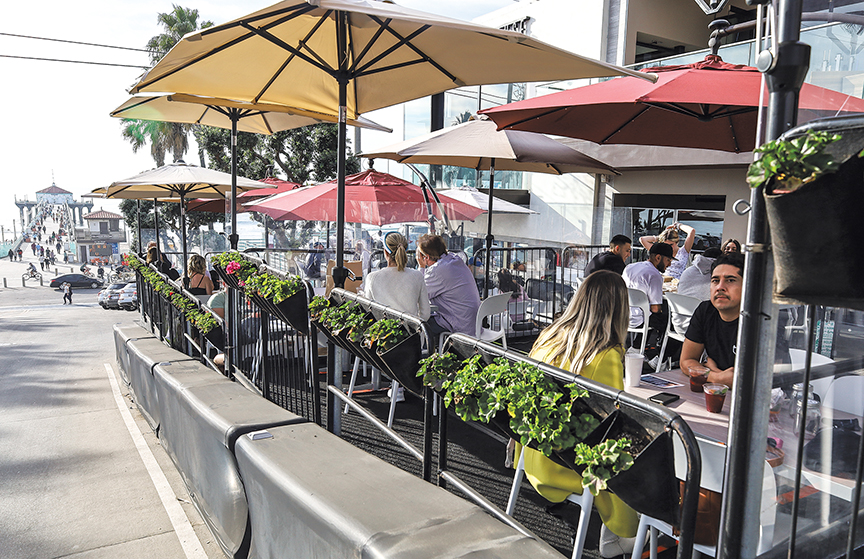 Despite cool weather and a County ban on outdoor dining, downtown Manhattan’s out door dining areas were busy on Sunday. 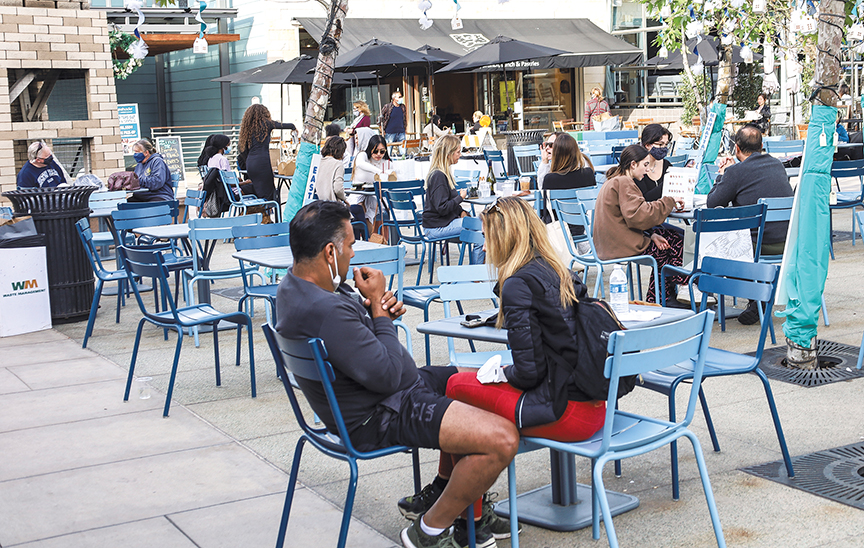 Diners with to-go orders fill tables in Metlox Plaza on Sunday. The County ban on outdoor dining applied to restaurants, but not public seating areas. Photos

Manhattan Beach last Thursday answered the pleas of downtown restaurant owners and announced  they would be allowed to “repurpose” their outdoor dining areas to allow public seating for diners with take-out orders. Restaurant service at the dining area tables would not be allowed.

The action came in the face of a new order by the Los Angeles County Department of Public Health that shut down outdoor dining for at least three weeks as part of a broader effort to counter the surge of COVID-19 cases. That restriction was struck down by Superior Court Judge James Chalfant, who on Tuesday issued a tentative decision that said, in part, county officials at the LA Department of Public Health “acted arbitrarily” when deciding to close outdoor dining. Given the State of California’s Stay at Home order Sunday night, however, restaurants will likely still not be open for dining this week (see related story page 18).

Mayor Suzanne Hadley said the use of the outdoor dining areas for seating could both be done safely and in a way that would help restaurants survive current restrictions.

“Our business community is struggling to survive the County’s latest restrictions and the City has a win-win solution to help, while safeguarding public health,” Hadley said. “Additional public seating areas will strike this balance and repurpose public areas that temporarily can’t be used for outdoor dining because of the County’s restrictions.”

Restaurants officially ceded control of their outdoor deck furniture, which they purchased after the city allowed an expansion of outdoor dining early in the pandemic, in another effort to help struggling businesses. On Monday, inspectors from the Los Angele County Department of Public Health paid visits to several Manhattan restaurants and questioned operators why their outdoor dining decks were still in use.

Mike Simms, co-owner of Simmzy’s and a handful of other downtown eateries, said he told the inspectors, ‘Well, they’re not our dining decks anymore. The city took them back when outdoor dining was banned.”

“So they’re now public spaces, just as if they were a public park,” Simms said. “And from the city’s stance, the order doesn’t shut down public parks, so anybody’s allowed to sit there.”

The idea to create more public seating came from meetings between businesses and a City Council subcommittee that includes councilpersons Steve Napolitano and Nancy Hersman. Several prominent restaurateurs pleaded with the Council at last Tuesday’s meeting to take quick action.

Mike Zislis,  owner of the Strand House, Rock N’ Fish, and BrewCo, said that larger operators such as himself could survive but many small businesses might go under without holiday revenues. (Zislis announced lastTuesday he would be laying off 54 employees at Rock N’ Fish because of the County closure order, and also closing his Strand restaurant. On Thursday, because of the city’s new outdoor dining policy, he announced he would reopen the restaurants.)

“My suggestion to council is be bold but be quick,” Zislis said. “I say that because three weeks from now doesn’t help us. The people whot are teetering right now, it’s not me, it’s the smaller businesses in town.”

Zislis noted that the Metlox plaza area had helped nearby businesses keep operating, since people can dine on their own outside, without service.  Simms, who is also president of the Downtown Business Association, told the council that public seating areas in the rest of downtown are minimal.

“It boils down to just four seats in the downtown area, four tables for people to sit at,” Simms said. “Just to give you some numbers about where we’re at within the restaurant community, we have several restaurants downtown that are down between 60 and 80 percent compared to last year. That ultimately means fewer jobs, way fewer jobs.”

“There is no association with outdoor dining and COVID,” said Zislis. “All of us restaurants would gladly shut down and put all of our employees in unemployment if we were the problem. We are not. And we need help right now, to just make our rent, keep some people employed, get through the next month or two till there’s a vaccine.”

David Slay, owner of the restaurant Slay, said he had a staff of 150 in February. It has dwindled to 40 and the new health order makes staying open at all questionable.

Despite cool weather and a County ban on outdoor dining, downtown Manhattan’s out door dining areas were busy on Sunday.

“It’s not just affecting the restaurants,” Slay said. “I was in Santa Barbara and Ventura Sunday…. Same climate, same ocean air. You could not get in a restaurant. I came back to Manhattan Beach, deserted. Last night, deserted. People are not making money three weeks before Christmas. What are we going to do to help these people? Asking for help is pretty humbling. We need help and we need it quick. We can’t wait till January…. These dishwashers who work at our place, and then run over to the Strand House or run over to Arthur J, these kids are working their butts off. And it’s been taken from them. I’ve seen the tears. I’ve heard, ‘Can I borrow some money?’ It’s disturbing. It’s really sad.”

Skechers president Michael Greenberg said that shutdowns across the country are impacting restaurants and retail in tandem and suggested that downtown Manhattan Beach could be decimated.

“We all know that business owners don’t call us up and say, ‘I’m about to go out of business,’” He said. “They don’t tell us when they’re going to go out of business. What really happens, you see paper in the windows and you see them boarded up. And timing is of the essence. Big decisions need to be made because we don’t want our downtown to be boarded up.”

At that meeting, Napolitano suggested the use of the restaurants’ equipment as public seating areas.

“We’ve got a lot of infrastructure out there already, and the question is…what fine line we’re walking by saying, ‘Okay, let’s just, rather than having any service whatsoever, cut out any service, from the restaurants to their dining decks, and use those dining decks actually as a public seating area,” Napolitano said.

“Can we put up other dining areas somewhere, or dining places to sit?” Montgomery said. “I wouldn’t call it dining; I would call it benches, and see if we do it safely. Let’s try it and see. If they come down on us, say you guys can’t do this anymore, then we’ll know. But I’ve not seen, in any other county orders, where it says any city cannot consider appropriate, safe places, even The Strand. Would The Strand be off-limits, to sit on the curb and look at the ocean?”

Councilperson Nancy Hersman was cautiously supportive, but said she was concerned the restaurants would be subject to fines.

“And then the other concern is, are we just instigating, taking the county’s rule and saying, ‘Well, you know, they said no outdoor dining.’ But, you know, if you sit here with a carry-out, it’s different.’ Is it? It’s just something for us to consider.”

As part of its action, the City emphasized that restaurants are not permitted to serve customers indoors or outdoors, and are limited to takeout and delivery. No reservations are to be allowed, social distancing and mask-wearing requirements remained intact, and users were asked to sanitize tables after use.

Simms said the city’s advocacy has been deeply appreciated by the business community.

“The city has been amazing at recognizing the economic issues our businesses are enduring and helping as best they can,” Simms said. “The city’s reclaiming of the outdoor dining decks and converting them to public parks/spaces was their idea, which they executed quickly. It makes me so proud and optimistic that our city and our businesses will get through this.” ER