Cruising Down Rosecrans to Eddie V’s 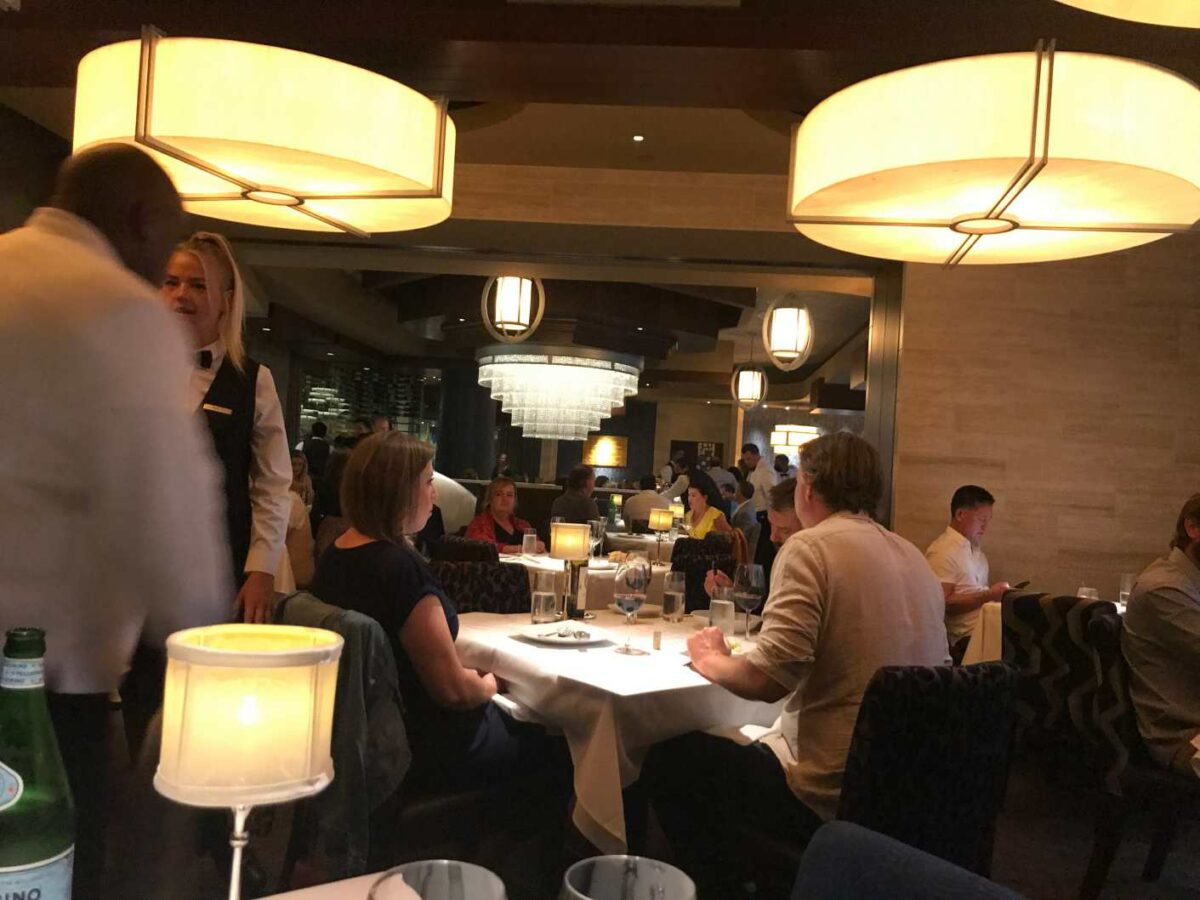 I was trying to figure out why the patio at Eddie V’s Prime Seafood seemed familiar even though I hadn’t been there before, and it suddenly struck me – the last time I was in a place like this, there was green water around us instead of green lawn. The broad patio with a wall-length bar looked remarkably like the stern of a cruise ship, and the office tower to the north had the stepped architecture reminiscent of a vessel’s superstructure. If the whole thing had been rocking slightly the illusion would have been complete, save for traffic noise replacing the sound of seagulls and the susurration of the waves.

I had a similar reaction while dining inside thanks to the large space festooned with crystal chandeliers, deco-inspired lamps, and the small army of white-coated servers. That environment was comparable to a five-star Caribbean or Florida resort. It’s not a common look in the South Bay, but it’s a symbol of luxury wherever tropical drinks are served on silver trays.

As might be guessed by the name Eddie V’s Prime Seafood, steaks and fish are the signature items here, with a mildly multicultural array of starters and sides. I was attracted to some of the shellfish starters, but instead ordered appetizers that would tell me more about the restaurant’s cooking: the Maryland-style crabcake and the lobster bisque. 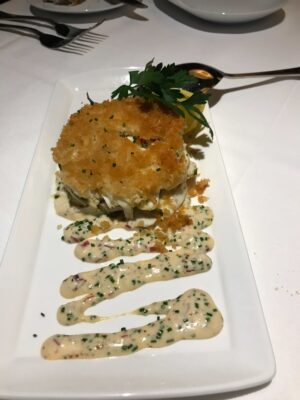 The crabcake at Eddie V’s. Photo by Richard Foss

I’m particular about Maryland-style crabcakes because they’re a tradition in my family. My parents were from Baltimore, and when visitors came west they brought cans of crabmeat and tins of Old Bay seasoning that were unavailable in California. The resulting crab feast was a celebration of our roots. The best crabcakes are made with meat called backfin lump, prized for its rich, slightly oily flavor and the texture you only get from large chunks of crab. That meat was combined with just enough egg and breadcrumbs to make it hold its shape, a dash of Old Bay and green herbs, then either fried or broiled.

Most crabcakes in California are made with cheaper Dungeness, Alaskan, or Asian crab. To make up for the drier texture and lack of flavor, lots of binder is added, and they’re often deep-fried. The crabcakes at Eddie V’s aren’t typical California crabcakes, thank heavens, but they’re not Maryland style either. This one seemed to be ninety percent crabmeat with almost no egg or binder, with some panko that formed a crust where it touched the pan. It fell apart at the touch of a fork, and there was no detectable Old Bay seasoning. A drizzle of spicy chive remoulade added an extra dimension, and was tasty even though not traditional. If you love the unadorned taste of crab this may be your favorite crabcake ever, but I’m a traditionalist and prefer the original.

The lobster bisque arrived with a flourish. We each received a cup containing a big chunk of claw meat perched on a crouton, and our servers poured the creamy soup over it at the table. It could be that combining the meat and broth at the table keeps the crab from being overcooked, but I suspect it’s pure theater. The bisque was very good, intense and creamy with a boozy hint of cognac.

On a different visit we had their iceberg wedge, despite my expectation that there wasn’t much to discover about the kitchen from such a standard item. Instead,I was reminded of the importance of really good materials in simple dishes. The smoky crisp bacon and creamy, rich blue cheese partnered well with the buttermilk-chive dressing. This is my new standard for iceberg wedges.

As we enjoyed our starters, we also enjoyed watching the teamwork of the service staff. On neither trip did our water glasses ever reach half empty, and when a table was reset, the silverware was placed with a precision that would have delighted the masters at Downton Abbey. The staff who interacted with us were courteous, professional, and well-informed, and supported each other to keep the meal running smoothly. They also know their wines, and when we requested something to pair with the crabcake, suggested a glass of Chateau Miraval rose. That brand is owned by Brad Pitt and Angelina Jolie, which biased me against it because many celebrity labels are vanity projects, but it was a fine choice. The cocktails here are also fine, and those who enjoy mixology will find some intriguing choices. 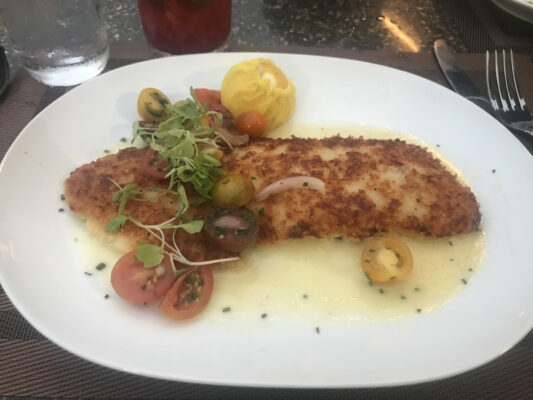 The Parmesan-crusted sole at Eddie V’s. Photo by Richard Foss

We’ve tried four main dishes: Norwegian salmon with a rye whiskey glaze, parmesan crusted sole, roasted jumbo shrimp with crabmeat, and a filet mignon topped with king crab Oscar. The seafood selection at Eddie V’s is surprisingly stable, and a server told us that they don’t plan on offering daily specials for at least a few more months. That’s surprising in a restaurant market that emphasizes seasonal produce and seafood, but allows them to focus on consistency of experience.

The rye whiskey and whole grain mustard glaze on the salmon was a nifty idea – I had enjoyed salmon with smokiness from Scotch whisky glazes, but the herbal tang of rye and the gentle sharpness of mustard played very well together. The fish was served over simply cooked baby carrots and spinach, which were well-chosen accompaniments. I liked the parmesan-crusted sole even better, and didn’t expect to. Parmesan has such a full flavor that I expected it to overwhelm the fish, but it didn’t quite do that. The effect was fish flavored cheese rather than cheese flavored fish, but that wasn’t a bad thing. What made it work was the texture balance, because the toasted cheese made a lacy, hard shell around the very moist fish. Each bite was a minor marvel. The fish was served with only a small tomato salad and sprinkling of baby greens, which made a pretty plate but was a rather light meal. I was less impressed by the shrimp roasted with lump crab and herbs, which were well made but ordinary and came with no sides. For $38, they might have at least put some vegetables on the plate so it looked like an entrée rather than an appetizer.

Our server had warned us this portion was small and suggested a half order of a side dish because full orders were “comically large.” This option isn’t on the menu but should be considered, because the bowl of au gratin potatoes rounded out the meal nicely. We took some home, because they were too good to leave behind.

The menu of steaks is short: they offer a filet mignon, a New York strip, and a ribeye. This is contrary to the trend in local steakhouses; for comparison, The Rex offers six different steaks, and PSP Steak offers nine from four different ranches. The Oscar style, in which veal or steak is topped with crabmeat, and bearnaise sauce, and served with asparagus, was invented in 1897 and probably named after a Swedish king who particularly enjoyed it. It’s a rare item on modern menus, a lush, decadent combination of sauce and seafood over prime protein. Since filet mignon is more noted for its tenderness than its flavor, the wrap of bacon around the steak is a sensible idea, and added a meaty crunch and dash of salt and smoke. It wasn’t really a steak lover’s steak (an unadorned cut with little more than salt and pepper to accent the meat), but it was a very good meal. 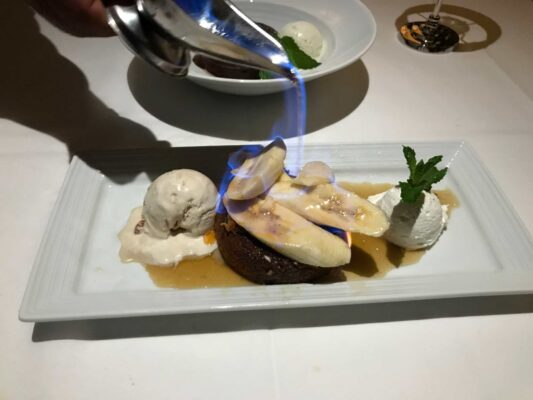 We tried two desserts, a hot Godiva chocolate cake with vanilla bean ice cream and a Bananas Foster with pecan butter ice cream. The chocolate cake was good, but the New Orleans classic of bananas over cake flamed with high proof rum is one of life’s great indulgences.

This is as good a place as any to mention that if you’re offered seating in the bar area, be prepared for a very loud environment. The house band belts out rock standards and soul at conversation-suppressing volume. If an instrumental combo had been playing with minimal amplification it would have fit the mood of the space much better, but it seems that every restaurateur has a secret desire to run a rock club. Those who enjoy normal volume should ask for patio or main room seating.

It will come as no surprise that a meal of indulgent food in a restaurant with a very large staff will have a fairly high cost. Expect to spend at least $100 per person food only if you’re having appetizers, a main course, and dessert, and you’ll be starting in the right place. This may be the most expensive restaurant in the South Bay, but they have been doing quite well and are often sold out. It’s five-star resort dining in an era when people haven’t been traveling much, a vacation for the mind and palate.