Redondo Beach resident and RUHS graduate Darren Stewart Marsee was born to Fred and Sharon Marsee on March 11, 1981. He entered this world alongside his twin sister Megan, both sharing rank under big brother Kevin. In April 2005, fresh out of college, and just after his 24th birthday, Darren was diagnosed with Non-Hodgkin’s Lymphoma (essentially cancer of the lymph nodes). He passed away just a few months later on July 17.

Darren was a brother, twin, son, confidant, leader… exclusive member of CRC (Crazy Redhead Crew) and TPA (Toilet Paper Anonymous), a beard-brother, and a friend to most. He was my best friend at the time of his death. For a brief time, we devoured life together, soaking it up like sponges dropped into the Fountain of Youth. After graduating Cal State University Long Beach together in the summer of 2004, we set out, along with friends Jessica Oddi, Blake Trippy, and Jason Flentye, to taste the diverse wonders of Europe. Soon after our return in the fall, Darren began complaining of severe back pain. When sleeping on the floor, and not sleeping at all ceased to help, he sought medical advice. A chiropractor took x-rays… Darren pointed out a small lump, or “knot” to a doctor… and soon he was seeing an oncologist, only to call me on the phone and (in a voice I’ll never forget) to tell me that he thinks they’re telling him he has cancer. He was diagnosed at stage 3-C, out of 4. Within a few short-long months, it was the end of our age of innocence. It was technically staph that killed Darren in the hospital; but it’s the cancer we friends would turn our vengeance upon. 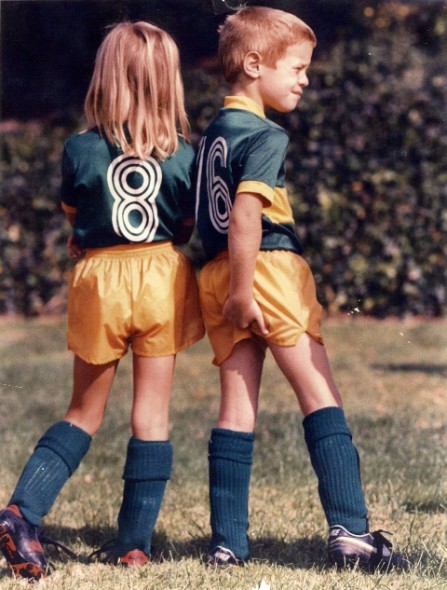 Darren and his twin sister, Megan. Photo courtesy of the Marsee family.

Like a towering 300-foot-tall ancient Redwood Tree finding its way back to the earth at the end of its climb, the fall of this freckle-faced, bushy-bearded, red-headed, monolithic man shook the ground out from under our feet. A community of friends: A circle of family, bereft of the beacon of Darren’s light, refused to let his flame extinguish. Instilled with the spirit of the D-Man (his more common moniker), Darren’s people established scholarships, golf tournaments, The Devil Rays softball team (after one of his lesser-known monikers), and attended many events in his name. They also established events in his name — none more widely known or annually anticipated than the D-Man Festival.

The D-Man Festival is produced by Dive N’ Surf, in Redondo Beach, where Darren worked during the time preceding his untimely death. The event was organized to raise money for the Leukemia & Lymphoma Society (LLS) on behalf of the team who parades for Darren in the annual Light The Night Walk at UCLA. This Saturday, Sept 10, marks the 6th Annual D-Man Festival. To date, it has raised over $82,000 for LLS.

“We wanted to raise money in Darren’s name for LLS,” said Marsha Rivera, close friend and former co-worker/manager at Dive N’ Surf. “When he was sick, Darren said he wanted to find a cure because cancer sucks… Every year we work so hard to put this [festival] together… It gives us a chance to remember, celebrate, and love him… I loved Darren, he was like a brother to me… He had a true soul.”

Darren was gracefully simple. What I like to call a meat and potatoes kind of guy. He’d always wanted to be a P.E. teacher, like Coach Bonach at Parras Middle School. He didn’t care to drive a Beamer across the 405 to hustle life from behind a desk and phone. He just wanted to wear short shorts and have a hat and whistle like Coach Bo. And he certainly had a unique soul, which people gravitated toward and rallied around. Affinity incarnate.

Childhood best friend Jason Withee said, “Last year at D-Man Fest I saw random people, mostly teenagers, taking pictures with a cardboard cutout of Darren. The guy is so damn charismatic it oozes out of cardboard! I thought that was pretty funny, but a perfect depiction of how people were attracted to him.”

His infectious energy was the light and life of a party, or a hike, or anything; and a type of tranquil purity was always present in his regard for people.

“I think it was inborn, who he was… not from me or his dad,” said his mother Sharon. “So many different people from different walks of life loved Darren… He was nonjudgmental and accepted everybody for who they were.”

“He just always knew what to do… very in tune emotionally,” added twin sister Megan. “He was so comfortable to be around. No matter what, everybody felt comfortable around him — he had such an easygoing personality that any type of personality could get along with.”

I recall an experience with Darren on the Italian Riviera… One night we found ourselves down by the water, arguing with a fellow traveler, albeit a foreigner, about how it was indeed possible to survive a particular 60-foot rock jump into the Mediterranean. (As proper Americans, we’d already been cannonballing and jackknifing the thing all morning.) Hot with red wine in our bellies, one of our party grabbed the unbeliever by the throat as if to throw him into the sea… Darren said, “Screw this,” bet the guy 30 Euro, stripped down to his boxer shorts, and executed a perfectly safe jump into the dark abyss. I think even the moon was smiling. 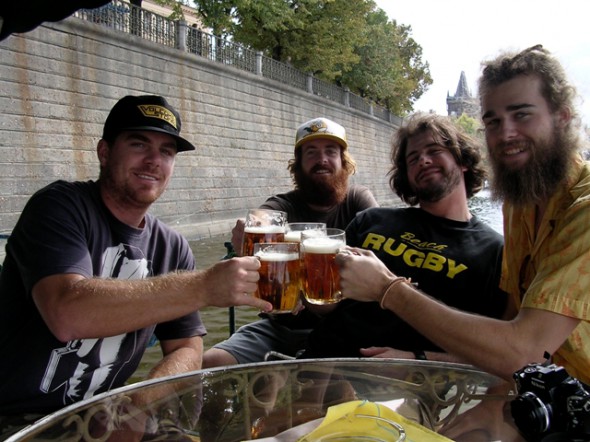 Beyond being the rally point for any party, Darren was a great equalizer — capable of not only gelling with any stroke from different folk, but able to bring them together as well.

“Darren was a common link between all kinds of people,” said best friend Jessica Oddi. “He set examples and was well-respected… I think it’s only natural a festival in his      memory evolved on its own…  We learned from him in life and death, and in his afterlife the community still comes together and celebrates his life and has a great time together to raise money.”

In death, his spirit still brings people together for the D-Man Festival. His father Fred said, “I feel that the reason there is an annual festival in Darren’s name is due to the fact that he made such a positive impact on those who knew him.  The number of friends he had was unique and amazing.  He loved people and people (especially his family) still love him. He left quite a mark on all of us.”

“He enriched our lives,” said his mother. “I think he enriched everybody’s lives, and to me it was amazing how many people he touched… and they still talk about him… It’s amazing that it still goes on.”

Older brother Kevin shared from his journal the magnitude of the mark he felt Darren left:

“Of anybody I’ve known, Darren was the least in need of a lesson on how to really live. He taught me more than I ever could have dreamed of teaching him, simply by living his life the way he did. By never taking for granted even a single day. By loving everyone around him. By not getting caught up in the trivial details that consume all of our lives. I think everyone who ever met Darren could see that he just wanted to appreciate life for what it was, and since he died we’ve all been trying hard to figure out how to do that too.”

One of the pillars of Darren’s approach to life was humor. Nobody will ever forget his deep, throaty laugh that resembled a grizzly. And I’ll never forget sitting in my car at a red light in Redondo Beach, when all of a sudden I saw Darren’s 1979 red VW Bus aimlessly coasting through the intersection with his bare ass pointed at me out the passenger window. The only drive-by mooning I’ve ever seen. Even from a shitty spot in a hospital bed (being intravenously fed poison) he’d still crack jokes, cuss, and ask how your day and life was going.

He was the type who would drag himself through the throes of fatigue, pain, sickness, or laziness to have a good time and live life full. Most things just didn’t really get Darren down; apparently not even cancer.

His mother recalled, “He said one nice thing about this [sickness]: ’I’ve spent more time with my sister than I have in a long time.’”

Megan recalled, “We were joking around about something and I hit him where his catheter was and I said ‘Oh geez, whoops, sorry…’ and he said, ‘It’s like old times — having my sister back.’”

We expected Darren to eventually come walking out of the hospital room, with  his beaming smile and piercing eyes, and drag us to Naja’s for a super mug of Red Seal Ale. Instead, he did what not a single one of us imagined he would do: he crossed the void. Like our iconic rockstars who perished before their time… like a Gram Parsons, Jim Morrison, Marc Bolan… Darren is forever immortalized in his youthful prime – eternally attractive, forever strong, and free. And with the recent birth of twin sister Megan’s first born boy, the name of Darren lives on. He took much of us with him; for in death, it’s not the fear of crossing so much as the pain of departure: We love and miss each other.

While we keep Darren in our hearts, and his spirit lives in our souls, we inevitably tend to bury him (and our poignant memories) in order to maintain functional lives as the great wheel continues to spin. The D-Man Festival allows us to come out of our internal shells, and feel it all again in protected unison, buffered by communal love and mirth, to shake our fist at the sun and howl at the moon, “We Love You!”

Best friend Jason Flentye said, “The D-Man Festival was created to raise awareness about Lymphoma by doing what Darren did naturally: bringing people together to have a good time and giving thanks for those times we get to share. I can still hear him say to me, ‘You know Flent, you only live once.’” 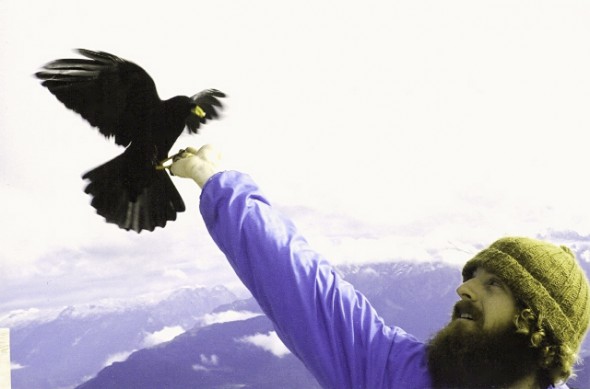 Darren Marsee in the Austrian Alps. Photo by Jeff Vincent