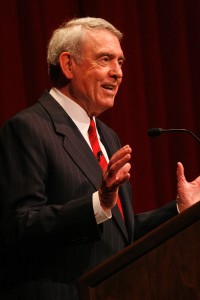 “What we need in journalism is a spine transplant,” former CBS Evening News anchor Dan Rather said at his Distinguished Speaker Series talk. Photo by Kevin Cody

by Kevin Cody
Dan Rather is two years shy of 80. Three years ago even CBS, where he worked for 44 years, thought it was time for him to retire. He responded by suing them for $70 million.

Rather has earned seven Peabody awards, broadcast journalism’s highest honor, and survived professional embarrassments of equal proportions. In 1977, he walked off the air in a tiff because a CBS editor preempted Pope John Paul II’s visit to Florida for a U.S. Open Tennis match between Steffi Graf and Lori McNeil. During the 2004 presidential election campaign, in an incident dubbed “Rathergate,” he was forced to retract his 60 Minutes story alleging that George W. Bush welched on his Vietnam-era National Guard duty. Last year his CBS lawsuit was dismissed, and just last month, Rather was accused of racism for saying on the Chris Matthews Show that Obama “…couldn’t sell watermelons if you gave him the state troopers to flag down the traffic.” He dismissed the comment as just another of his Ratherisms.

Rather is the Jay Leno of journalism, and not just because of his one-line Ratherisms. Money and honor don’t motivate him. Embarrassment doesn’t deter him. He simply appears determined to protect his title as the “hardest working man in broadcast journalism.”

Since leaving the CBS Evening News, which he anchored for 24 years, he has anchored the “Dan Rather Reports” on HDNet, written a newspaper column, “Texas on the Potomac,” for the Hearst News Service, hosted a CBS radio program, and launched a website called NewsAndGuts.

Don’t look back
Distinguished Speaker Series subscribers hoping to hear Rather reminisce about the 10 presidents he’s interviewed, his coverage of John Kennedy’s assassination, which brought him to national attention, or his two, exclusive interviews with Saddam Hussein, were in for a disappointment.

“I can’t pick one. Anytime you interview a president it’s an honor,” was all he had to say about his presidential interviews.

He didn’t mention the Kennedy assassination and limited his remarks about Hussein to saying he felt “a strong pucker factor being in the presence of evil.”

His comments on contemporary politics were similarly restrained.

“He who lives by the crystal ball eats a lot of broken glass,” was his response to being asked to predict whether Obama’s healthcare bill would pass.

“If you take nothing else away from tonight, remember this,” he began. “News is what’s important that someone in power doesn’t want people to know. The rest is mostly advertising.”

“A free press is enshrined in the Constitution. It is no less essential to our system of checks and balances than any other branch of government.”

“A lifetime in journalism has taught me that if we don’t do our job well, we will cease to get the truth.”

Prior to his speech, during a reception hosted by Torrance Memorial Medical Center at the Shade Hotel, Rather noted that ever since Dwight Eisenhower held the first televised presidential news conference, successive administrations have used new technology to increase their control over the news, with increasing effectiveness.

When Eisenhower gave his speech on the military industrial complex, there were no Teleprompters, so the president read the speech with his head down.

“It was one of the greatest speeches of any president and all the viewer saw was the top of the president’s bald head,” Rather said.

Back to basics
Reporters, by comparison, work with limited tools in pursuit of modest goals, he said when asked how he dealt with evasive, or dishonest politicians.

“We don’t have subpoena powers. The best we can do is ask tough questions, and keep asking them until we get an answer, or it’s obvious we aren’t going to get an answer,” he said.

To illustrate why it’s important to get leaders on the record, even if their statements are untrue, to told a story related to him by President Lyndon Johnson’s press secretary George Christian.

President Lyndon Johnson was haunted by his statement during the 1964 election campaign that, “We are not about to send American boys nine or ten thousand miles to fight a war Asian boys should fight.”

He told Christian he wanted a press release denying he ever made that statement.

Christian showed him news clippings with the quote. Johnson responded, “You know how the press lies.”

Then Christian played a radio recording of Johnson making the statement in his unmistakable twang. Johnson said, “You know how easy it is to slice and dice those tapes.”
Finally, Christian showed Johnson a television tape of the candidate on a Philadelphia street corner with a bullhorn, promising not to send American boys to Vietnam.
“Are you sure that’s me?” the president asked.
“A lifetime in journalism has taught me,” Rather said, “that if we don‘t do our jobs well, we will cease to get the truth and instead we will spread propaganda.”

Rather said he isn’t concerned about the fact that the internet will soon, if it hasn’t already, become the primary source of news.

“I’m old enough to remember when radio was supposed to be death of newspapers and television the death of radio. And they’re all still with us,” he said.

(Rather apologized for is Obama “watermelon” comment, which he made on KNBC’s Christ Matthews Show, not on broadcast TV, but on the Huffington Post internet site. He prefaced the apology by observing, “Much of what we call news, isn’t. Much of what we Tweet, or post, or chat away at under the guise of news, are distractions.”.)

Rather said the problem with journalism wasn’t new technology, but the lack old fashion character.

“What we need in journalism is a spine transplant. We’ve lost of some of the grit in our gut. When journalists turn investigative tools toward sensationalism they make themselves easy targets for those who would discredit us.”

“Reporters make promises to get access and are reluctant to ask tough questions.”
“Have journalist lost their heart for the fight?” he asked.

“I don’t think it’s too strong to say that the future of the country depends on how we act on this question.”
He noted that four international corporations control 80 percent of the news media.

“I’m not anti corporation, but the consolidation of the media has placed big business in bed with big government, no matter the administration,” he said.

“As audiences become increasingly fragmented, there are people who admit publicly the way to get ratings is, instead of trying to appeal to a mass audience, select a core audience. Take a partisan political, or ideological position to get a core audience that you can expand from.

“This has led to Fox being on the right and MSNBC on the left. It’s about ratings.

“It’s a free country, they have a right to do it. But what cable news has done is put everyone in a race to the bottom, to dumb it down and sleaze it up in a desperate race for ratings.”

“They’re all worried about the internet becoming the major source for news.”

“The idea that used to prevail is that the networks were in business to make money, but news was a public trust, a compact made with the American People for use of the airwaves. That is gone.”

“If you take the long view, there is the possibility of a world where no one is trying to be an honest broker. The opportunity for outright propaganda is real. This is the danger.

“If you want to teach sixth graders about propaganda, show them ‘Triumph of the Will,’” he advised. (The 1934 film depicts Hitler leading Germany back to greatness).

Courage
Following his speech, Rather was asked what Edward R. Murrow would think of today’s television news. In 1958, Murrow, now revered as “the patron saint of broadcast journalism,” made a scathing attack on his employer CBS, as well as NBC and ABC, in a talk to the Radio and Television News Directors Association. Like Rather, Murrow faulted the networks for sacrificing news for profits. Like Rather, CBS forced Murrow off the air by marginalizing his air time.
Rather cited Murrow’s speech, which concluded:

“This instrument can teach, it can illuminate; yes, and it can even inspire. But it can do so only to the extent that humans are determined to use it to those ends. Otherwise it is merely wires and lights in a box.”
Murrow’s reaction to television today, Rather said, would be, “First, weep. Second, he would update his 1958 speech and start fighting.”

Rather signed off his final CBS Evening News broadcast with his father’s favorite word, “Courage.”
“I’ve always been an optimist, by experience and by nature, particularly when it comes to our country. We’re sometimes slow to catch on in a crisis, but we’re the most adaptable people on earth and we’ll adapt to the changes in journalism and the economy.”

Presidential historian Michael Beschloss will address Distinguished Speaker Series subscribers on Tuesday, April. He is the author of Kennedy and Roosevelt; the Uneasy Alliance and Presidential Courage. CNN business anchor Ali Velshi will follow, on Monday, May 3. The Speaker Series is held at the Redondo Beach Performing Arts Center, at the corner of Aviation and Manhattan Beach boulevards. For more information visit www.speakersla.com. B